“Our goal is a whole farm, holistic type of approach.” – Keith Gorham 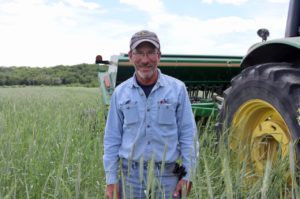 On Keith Gorham’s Illinois farm, small grains are a key component in his livestock rations and help him achieve his regenerative agriculture goals of cutting inputs and improving profitability. “We farm a 500-acre grain and hay farm and operate a cow-calf to finish farm. We finish everything we grow.”

In both Iowa and Illinois, where the Gorham farm sits just across the Mississippi river from Muscatine, Iowa, corn and soybeans are the dominant feed source for cattle and hog operations, but Keith makes room for small grains like cereal rye and triticale/peas.

“We jumped on the cover crops bandwagon in a big way in 2016 as a feed source for our hogs and cattle. We just pulled the trigger and went for it, and the animals have thrived.” 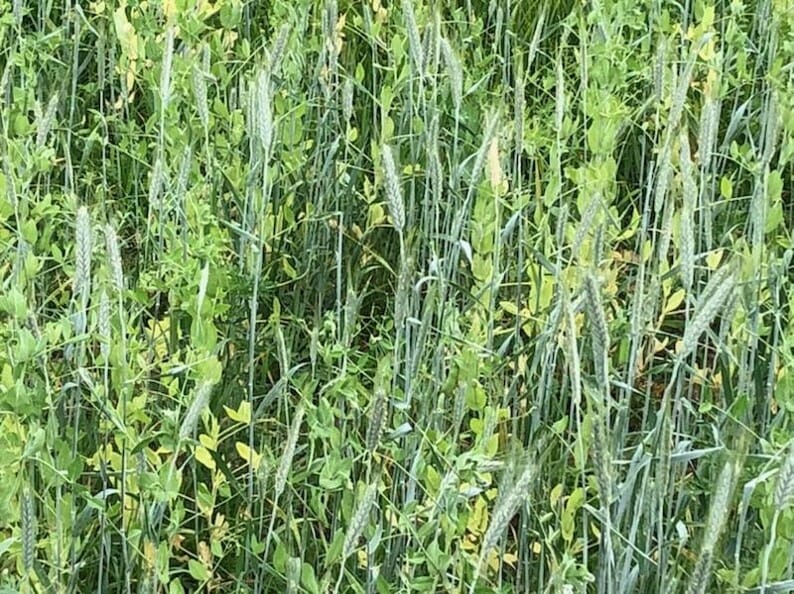 Why Use Small Grains as Feed?

“When we started transitioning our field to using cover crops in 2016 as part of our regenerative practices, our goal was to get to where we wouldn’t have to purchase any nitrogen.” A year later in 2017, Keith introduced small grains as a cash crop for feed and seed.

He now grows all his small grains with legumes to incorporate in his feed rations and to reap the benefits of growing green manure. This allows him to reduce his overall inputs, both economically and environmentally, by allowing for a reduction in fertilizers and other external nutrient sources. 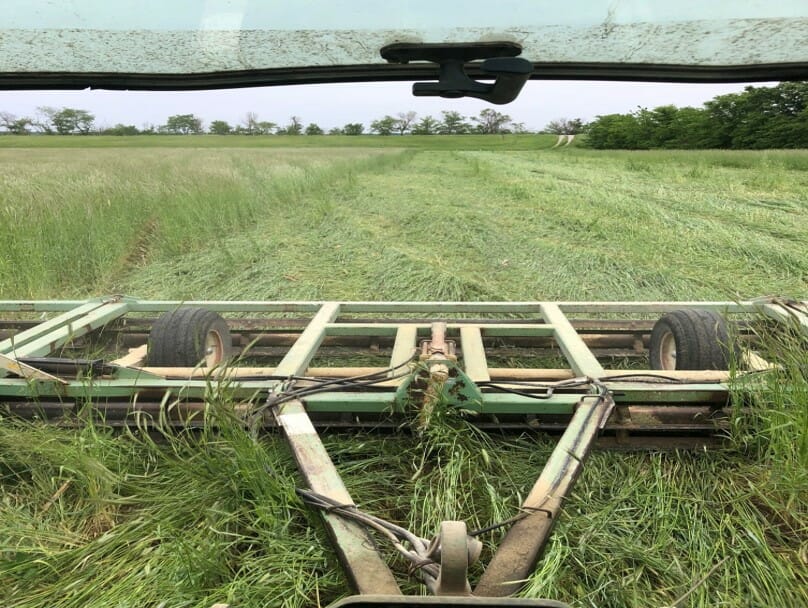 Reducing off-farm inputs has reduced expenses. “Our seed bill is zero. We’re putting on 120 pounds per acre of winter wheat and usually 5 to 7 pounds of some type of clover underneath the winter wheat.

We don’t purchase any fertilizer for any of our small grains, and over the course of the seven years we’ve been doing cover crops as feed, our P and K needs have gone to zero.”

Keith’s primary source of fertility on the farm is manure and in addition to cutting synthetic fertilizer, Keith has reduced herbicide use for all crops.

“Compared with surrounding farmers throwing fungicide and everything at the fields, I think our synthetic N reductions – which resulted in our “zero-N fields” will be $360/acre more profitable.”

Keith began his small grains venture with winter wheat in alfalfa as a hay base, and credits PFI for providing helpful insight into planting legumes underneath the winter wheat, as well as triticale and peas.

“We’re planting cereal rye at 65 lb/ac, or if we’re doing hay, we’ll put 20 lb alfalfa in with it. Our fertility remains unchanged with no herbicide. We’re growing it, cleaning it and growing it again. Our rye yield this year was about 46 bu/ac.”

Keith’s yield and planting rates for small grains and legumes. 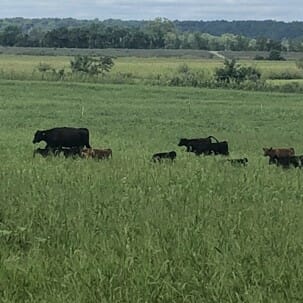 The palatability of the small grains impacts what he adds to the rations. For example, his cattle have less appetite for rye compared to wheat or the triticale and peas mix.

Economics also play a role in what he ends up feeding versus selling, “We’re backing off feeding as much wheat this year because the wheat markets have been crazy. We’ve been selling, $8-10 wheat, so obviously, we rolled with the economics there. We kept what we needed for seed, we kept part of what we needed for feed, but we didn’t hold as much to get us through the winter.”

Winter wheat, cereal rye and triticale-pea mix are all fed at a 25% inclusion rate for their 200 Berkshire hogs that Keith direct markets for a premium. Keith sees gains from all the small grains but cautions to be on the lookout for ergot in rye.

By incorporating his own farm-raised small grains, Keith has substantially reduced his purchased soybean meal and has seen hog carcass quality improve.

“Since our hogs are all direct marketed, we work with three different lockers and they have noted that our carcass quality has improved dramatically. In two of those three lockers, they say that our hogs hang better quality-wise than any other hogs they get in. We’re not trying to set the world on fire, we’re just trying to do this economically.”

While Keith focused primarily on feed for cattle, he admits to a fondness for the goats and poultry that also roam the Gorham farm.

“We started with Boer goats, kind of the Angus of goats, and now we are at half Kiko, so now we’ve got a little of everything! I find the Kikos to be hardier than the Boer, plus they’re beautiful. I like them!”

According to Keith, goats are the most profitable animal he has on his farm, citing the fact that they won’t eat his wheat, and therefore don’t damage or diminish wheat profits.

“We’ve got 60 goats, and they’re amazing little animals.” The Gorhams don’t buy much commercially for their goats, instead relying on local nutrient sources such as kale and corn in the wintertime. They do purchase some dry minerals for the goats as needed.

As for the poultry Keith says, “The poultry are neat, they eat everything. The chickens are the easiest enterprise for people to do. I don’t want to sound like Old MacDonald having people thinking, hey, this guy’s got everything that breathes oxygen but in this regenerative program, we’re trying to see if poultry fits.”

The chickens are fed a finely ground mix of corn and wheat or rye and occasionally alfalfa. Keith’s family, his son, wife and daughter all help extensively on the farm as they manage the goats, poultry, cattle and hogs that make their 500-acre farm as productive as a 2,000-acre farm.

Check out other blogs and research on feeding small grains to livestock:

For More Information on Small Grains and Extended Rotations: