Driving with his daughters down the country road in southern Minnesota, Ben Penner saw through his truck window, a flock of sheep in a row crop field. The flock belonged to Matt Goettl, a small-ruminant farmer from St. Peter, MN, who works with farmers in the area to graze their cover crops.

That’s what Ben saw as he drove past. “I happened into this grazing thing a little by accident,” he remembers. But he decided to go for it because “it looked like Matt had a pretty slick operation.” Also, Ben’s daughters liked seeing the livestock guard dogs so there was extra lobbying pressure to bring the sheep to his Kernza® fields. 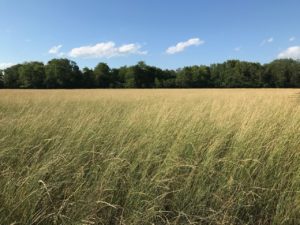 Ben’s field of Kernza®, a perennial grain, before harvest.

Kernza® is a perennial grain being developed by a consortium of universities and research centers across the globe. A cousin of annual wheat, it is unique because it is productive for up to three years and “can be grazed twice per year, once in early May before the stems elongate and joint, and once again in the September during regrowth after you’ve harvested the grain,” explains Ben, vice-president of the Kernza® advocacy group Perennial Promise Growers Co-op. If managed carefully this grazing does not affect grain yield. Matt kept an eye on the field and moved the paddocks frequently to avoid overgrazing, but Ben wasn’t too worried – with an eight-foot root depth he figures the Kernza® is resilient.

Under a piercing blue fall sky, with the clank of bells and occasional baaing, the”slick operation” that Ben had admired now slowly made its way across his Kernza® field. The grain had already been harvested, and there was around eight inches of green regrowth on the crop. Matt stocked the paddocks with a 160-head flock of miscellaneous goats and sheep. The paddocks were about two acres, which he moved every other day. A water trailer moved with the paddocks, and because there was no access to water on site Matt brought water in a tank on his truck to refill the trailer during moves. Matt uses electronet fencing, which he concedes takes more time a nd is more work, but he “has very few animals get out, and no predation issues.” Last, but certainly not least (especially if Ben’s daughters have anything to say about it), the livestock guard dogs keep watch over the whole operation. 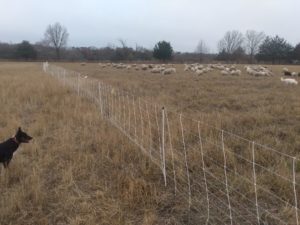 There are several ways to work out an arrangement like this, but Ben and Matt settled on a simple trade of fertilizer for forage and called it even. The flock got forage, the ground got manure, and the neighbors enjoyed the show. In the end “it was a win/win/win situation,” says Ben. He can cut down on fertilizer and the light trampling worked organic materials into the soil. “They left the dry stems, which is great because I want that to capture the moisture from the snow. They ate all the weed shoots and seedlings coming up, and they ate all the grass. They grazed it heavily, but not too much.” The hard numbers on benefits remain to be seen. Ben took soil samples earlier in the season, and will again next year, but for now he’s simply excited to see the result of it. Plus, with no livestock of his own, he’s glad the forage benefits of Kernza® can be realized without having to make hay and move it off the land. “Bringing livestock to the hay, rather than hay to the livestock seems like a pretty good deal.”

Matt is happy to have the extra forage for his flock. This summer the sheep lost weight grazing the field of another farmer, and the drought has made finding forage difficult and buying winter feed expensive. The dry conditions meant that the Kernza® regrowth was not as vigorous as it otherwise would have been, but the sheep ate it well. “As long as their body condition didn’t go backwards, I was happy,” says Matt. His aim is always to extend the grazing season for as long as he can before he brings the flock back to his dry lot, and the Kernza® helped him do that.

It’s a working relationship both farmers are eager to continue next year. Matt appreciates whenever a farmer takes a chance to try something new and work with him. “Convincing people to do something different can be tough, but it’s easy to make them curious and ask questions by doing a good job. It takes time to build that relationship and trust, but once you get it you can demonstrate to everyone in the area what you are about and how you work.” That word-of-mouth recommendation is how Matt gets almost all his grazing land.

Ben believes everyone should get livestock grazing their fields. “I think it’s a great model for other farmers too. The only drawback is that it takes a high level of coordination, but if we could match all the Kernza® acres with someone to graze them, that would really be a benefit for everyone.”

Are you a grazier looking for a landowner, or vice versa? Check out the Midwest Grazing Exchange to see who’s in your area to connect with.