Neonicotinoid seed treatments (“neonics”) are widely used to protect soybean seedlings against a broad range of insect pests up to four weeks after planting. Because neonics are relatively inexpensive, they are commonly applied in a preventive manner without first scouting to confirm the presence of target insect pests. Research has consistently shown that neonics generally do not improve plant population or yield. Field studies in Quebec, Canada, for example, found that using neonics in corn and soybean to prophylactically treat wireworm failed in all cases to improve plant stands and yields.[1] PFI farmer-researchers conducted trials in 2014 and 2015 to determine the value of neonics. Of 5 total trials that compared soybean yield between untreated seed and seed treated with neonics only or with a combination of neonics and fungicide, none experienced yield increases as a result of using treated seed.[2] In a more recent PFI on-farm trial, Dick Sloan showed that planting untreated soybean seed was more profitable than planting seed treated with neonicotinoid and fungicide.[3]

Sam Bennett, a PFI farmer-researcher, was interested in determining the profitability of neonics in his operation. He commented, “I want to take ownership of what I’m applying to my farm instead of just using pesticides because it’s what is ‘standard.’ I hope to work toward eliminating insecticides that could be harmful to pollinators without sacrificing yield or profitability.” Indeed, the widespread and indiscriminate use of neonics often pencils out to an added cost with no return while also harming beneficial insects, wildlife, soil health and water quality.[4,5]

In concert with Steve Saltzman and Alec Amundson, Bennett hypothesized fungicide seed treatments are more necessary to early-planted soybean yield than neonics. Together, they designed on-farm trials to compare soybean yield, population and return on investment between their typical pesticide-treated soybean seed and soybean seed treated only with fungicide. When asked about how the research might impact his farm, Saltzman replied, “I’m hoping for data to help myself and others make informed decisions about seed treatments in the future.” Amundson added, “As neonics come under pressure, this research will allow us to gauge the actual need of insecticide seed treatments.”

To determine the value of neonicotinoid seed treatments, the cooperators compared plant populations and yields of soybeans between the following treatments:

Cooperators assigned treatments randomly to neighboring strips of soybeans, then replicated each treatment a minimum of four times. Randomization and replication allowed us to conduct statistical analyses to assess the effects of each treatment on soybean populations and yield.

Amundson’s trial site was preceded by a cereal rye (VNS) cover crop flown into standing corn. He fertilized the trial site on November 6, 2020, with 5-13-21-2.5S applied at a rate of 68 gal/ac. Amundson established treatment strips on April 21 of the following spring by planting soybeans in both treatments. He planted 5 replications of each treatment, which resulted in a total of 10 strips (5 reps × 2 treatments) that each measured 80 ft by 2,400 ft (Figure A1). Soybean seed in Amundson’s typical treatment was treated with EverGol Energy (fungicide), Lumisena (fungicide) and Gaucho 600 (insecticide), and soybean seed in his fungicide-only treatment was treated only with EverGol Energy and Lumisena. Amundson planted beans in all treatments on 15-in. row spacing and at a population of 155,000 seeds/ac. On May 18, Amundson applied the post-emergent herbicides Zidua SC (4 oz/ac) and Roundup PowerMax (36 oz/ac). 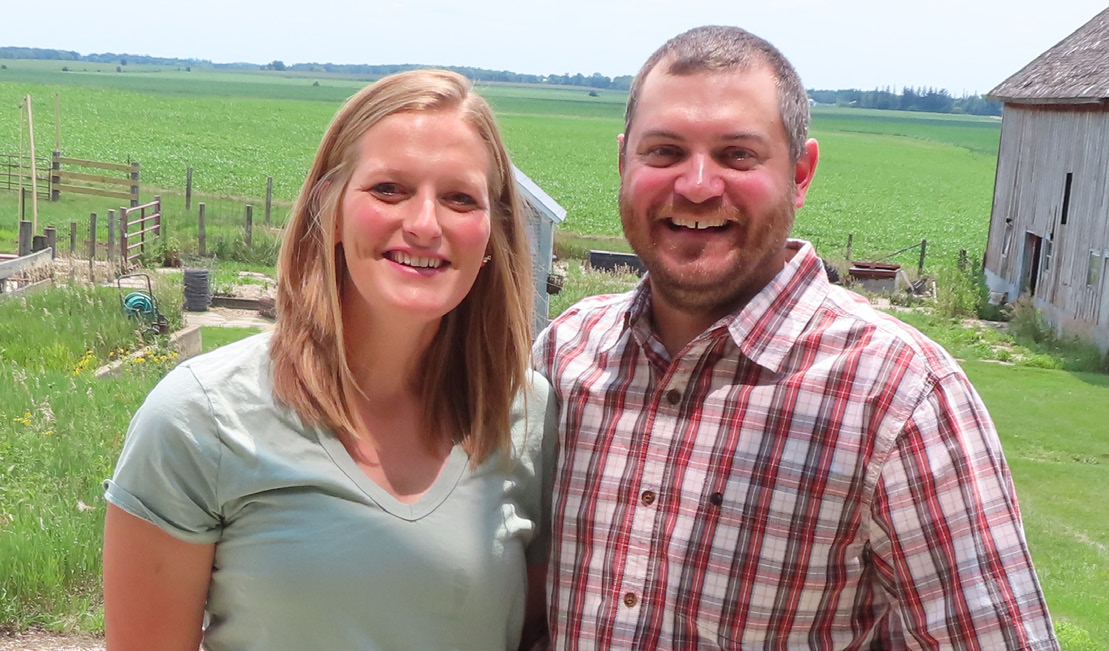 Rachel and Alec Amundson are a dynamic, husband and wife duo who farm together in Osage, IA. A late spring freeze killed their beans in this trial, but they still had plenty to discuss with attendees at the field day they hosted later that summer. Photo taken July 13, 2021.

Bennett’s trial site was preceded by corn and had been under long-term no-till. He fertilized his trial site in December 2020, by applying chicken litter at a rate of 3 tons/ac (135 lb N/ac, 120 lb P/ac and 75 lb K/ac). He established treatment strips on April 25, 2021, by planting soybeans in both treatments with 15-in. row spacing and at a population of 140,000 seeds/ac. Bennett planted 4 replications of each treatment for a total of 8 strips (4 reps × 2 treatments) that measured 30 ft by 1,705 ft (Figure A1). Soybean seed in his typical treatment was treated with Clariva Complete (nematicide, fungicide, insecticide), and soybean seed in his fungicide-only treatment was treated with Vibrance Trio (fungicide). He applied a pre-emergent herbicide on April 30, 2021, which consisted of generic Sonic (5 oz/ac), glyphosate (32 oz/ac), Enlist One (24 oz/ac), Metribuzin DF (4 oz/ac), AMS and a nonionic surfactant. Bennett applied herbicides twice more that season – once on June 10 with a mix of glyphosate (32 oz/ac), Enlist One (24 oz/ac), generic Dual (16 oz/ac), AMS and a nonionic surfactant, and once again on July 20 with Trivapro (13.7 oz/ac). 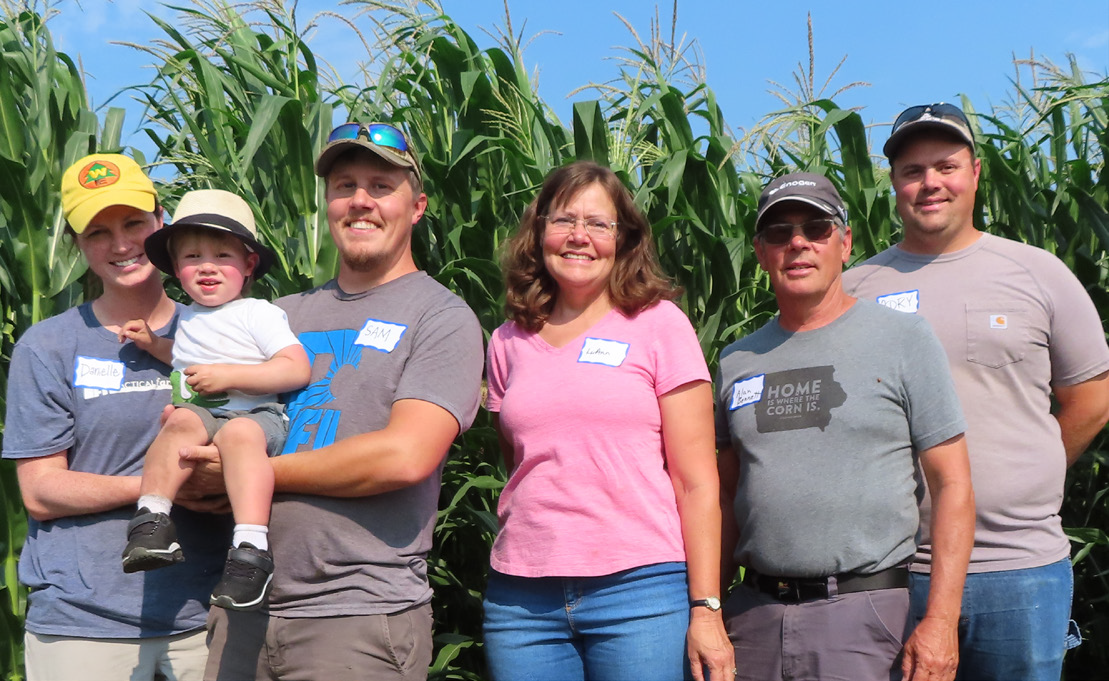 Saltzman’s trial site was preceded by no-till corn. He fertilized the site on March 1, 2021, with potash and MAP applied at rates of 170 lb/ac and 70 lb/ac, respectively. He established treatment strips on April 25 by planting beans in 30-in. rows at a population of 140,000 seeds/ac. Saltzman planted 4 replications of both treatments and additionally included a third treatment (‘Untreated’) that consisted of untreated soybean seed (Figure A1). This resulted in a total of 12 strips at Saltzman’s (4 reps × 3 treatments) – each of which measured 30 ft by 360 ft. Soybean seed in his typical treatment was treated with ApronMaxx RTA (fungicide) and imidacloprid (insecticide), while soybean seed in his fungicide-only treatment was treated only with ApronMaxx RTA. Three days after planting soybean, Saltzman applied a mix of two pre-emergent herbicides: Fierce (3 oz/ac) and glyphosate (24 oz/ac). Saltzman applied herbicides on two more occasions: once on June 22 using a mix of generic Liberty (29 oz/ac), clethodim (6 oz/ac) and AMS (2.8 lb/ac), and again on July 2 using the same mix as his June 22 application but including 0.55 oz/ac of generic Classic. 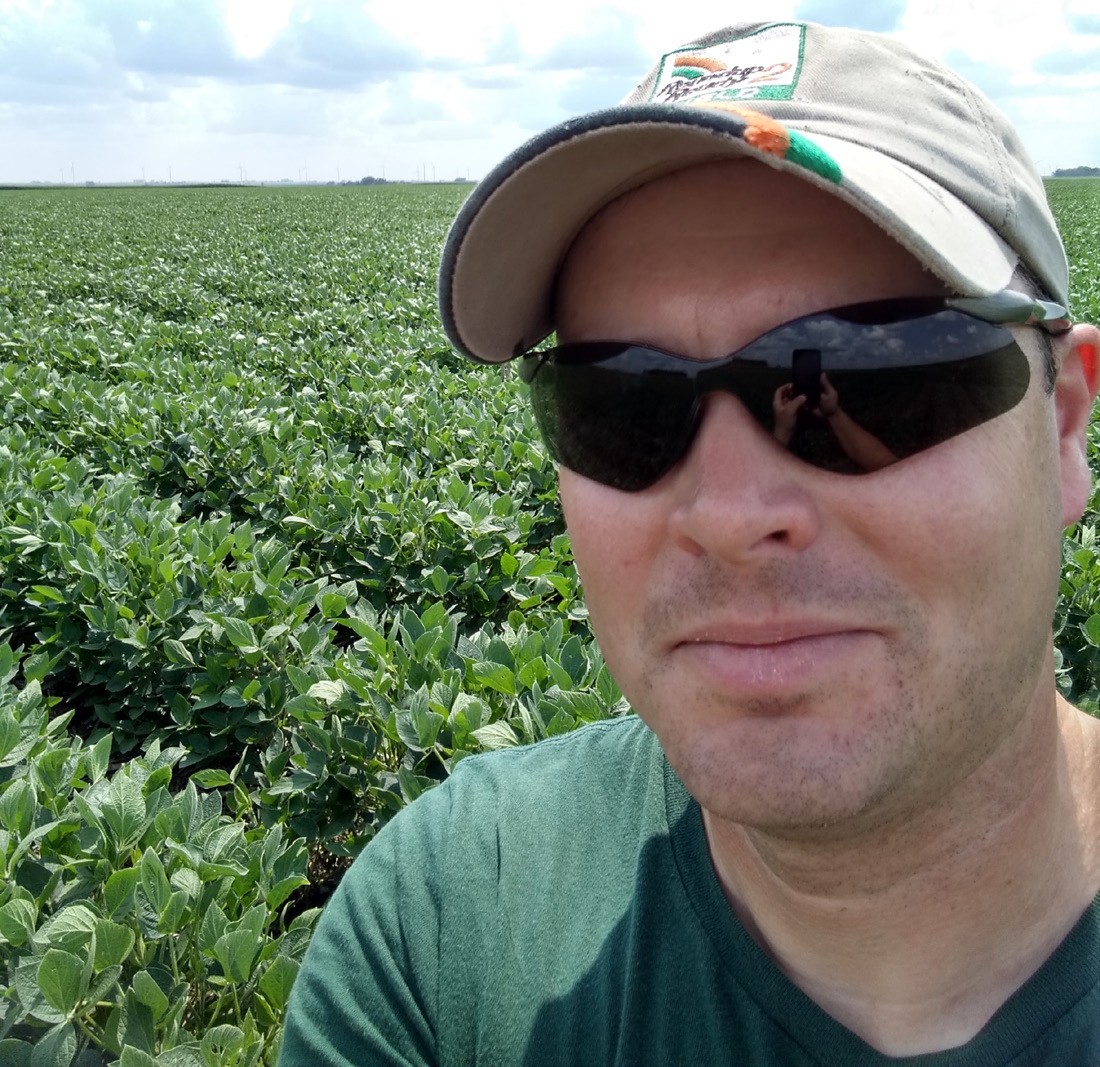 Steve Saltzman catches a moment on a sunny July day to snap a photo of himself among the soybeans in his trial outside Lenox, IA. Photo taken July 19, 2021.

Amundson, Bennett and Saltzman intended to sample soybean plant populations at three and six weeks after planting soybeans (Table 1); however, a late spring frost killed Amundson’s beans before he was able to conduct the second sampling, and Saltzman’s first sampling was delayed to nearly six weeks after planting. Saltzman noted, “I couldn’t get out to do the first sampling until closer to 6 weeks after planting. It seemed liked anything that was going to come up was already out of the ground, so I just did one stand count.” To conduct stand counts, the cooperators counted the number of plants in a length of row representing 1/1000th of an acre (17 ft 5 in. at Saltzman’s, 34 ft 10 in. at Amundson and Bennett’s) in each strip. Their counts were multiplied by 1,000 to calculate the number of plants per acre.

The cooperators collected yield data by harvesting soybeans from the center of each strip and recording yield and percent moisture (Table 1). Yields were adjusted to standard moisture (13%).

To evaluate effects of the seed treatments on soybean yield and plant population, we calculated treatment averages for each measurement then used Tukey’s tests to compute least significant differences (LSDs) at the 95% confidence level. The difference between each treatment’s average soybean yield or stand count is compared with the LSD. A difference greater than or equal to the LSD indicates the presence of a statistically significant treatment effect, meaning one treatment outperformed the other and the farmer can expect the same results to occur 95 out of 100 times under the same conditions. A difference smaller than the LSD indicates the difference is not statistically significant and the treatment had no effect.

The data at all three sites support the idea that insecticide seed treatments might not be necessary in early-planted soybeans in Iowa. At first glance of Saltzman’s data, one might also question the benefit of fungicide seed treatments; however, uncharacteristically low precipitation throughout April, May and June likely kept fungal disease pressure at low levels (Figure A2). 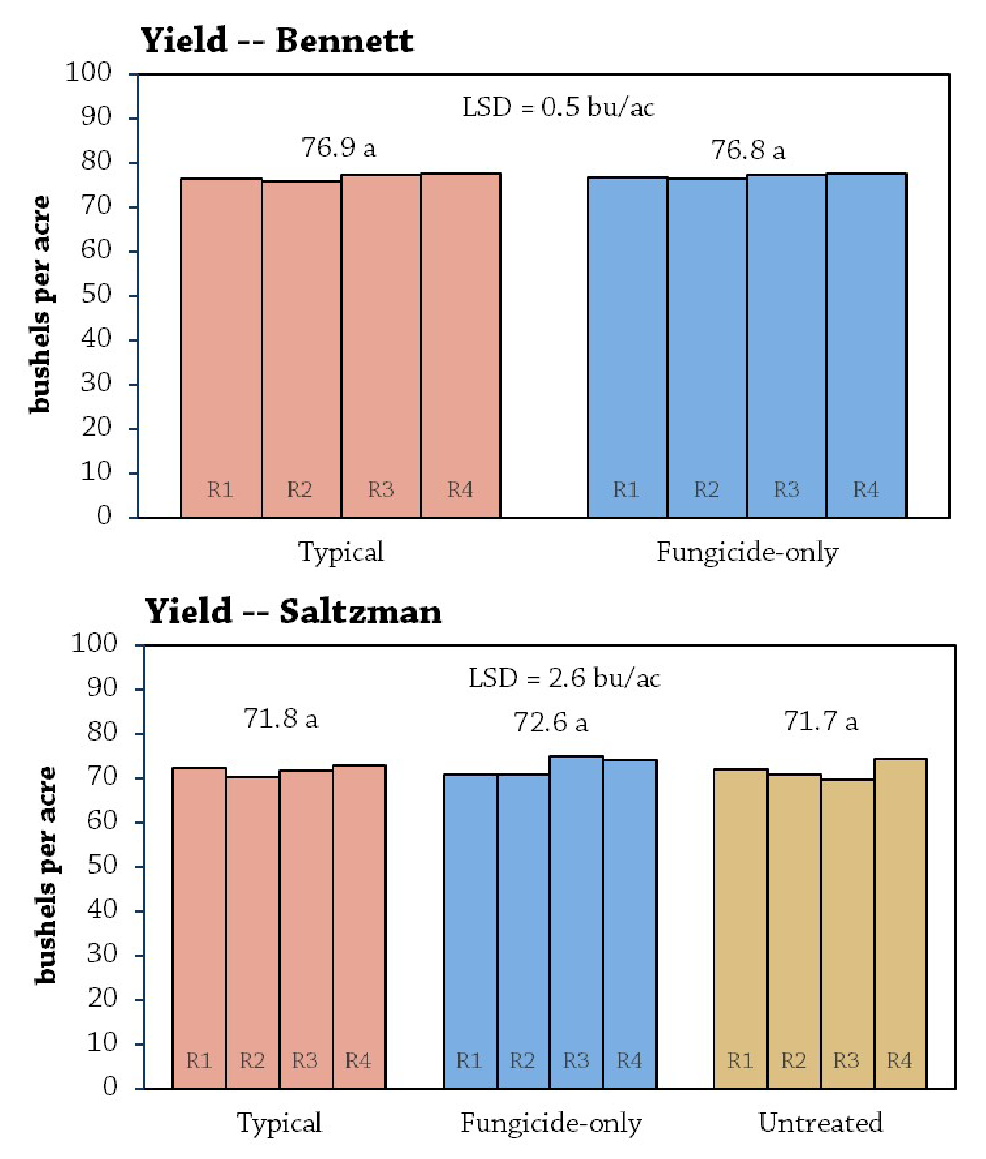 FIGURE 1. Soybean yields among treatments at Bennett’s and Saltzman’s. Columns represent yields of individual strips. The average yield of each treatment is indicated above grouped columns. Because the differences between any two averages at each farm are less than the least significant difference (LSD = 0.5 bu/ac at Bennett’s; LSD = 2.6 bu/ac at Saltzman’s), the yields are considered statistically similar at the 95% confidence level. Averages are followed by the same letter-rankings to indicate statistical similarity.

Differences in ROIs (return on investments) between treatments at Bennett’s and Saltzman’s existed but were minor (Table 3, Table 4). Bennett’s fungicide-only treatment generated $10.00/ac in savings compared to his typical treatment (Table 3). Saltzman’s untreated beans provided the greatest return on investment; however, the savings amounted to less than $3.00/ac due to the generally low cost of seed treatments (Table 4). 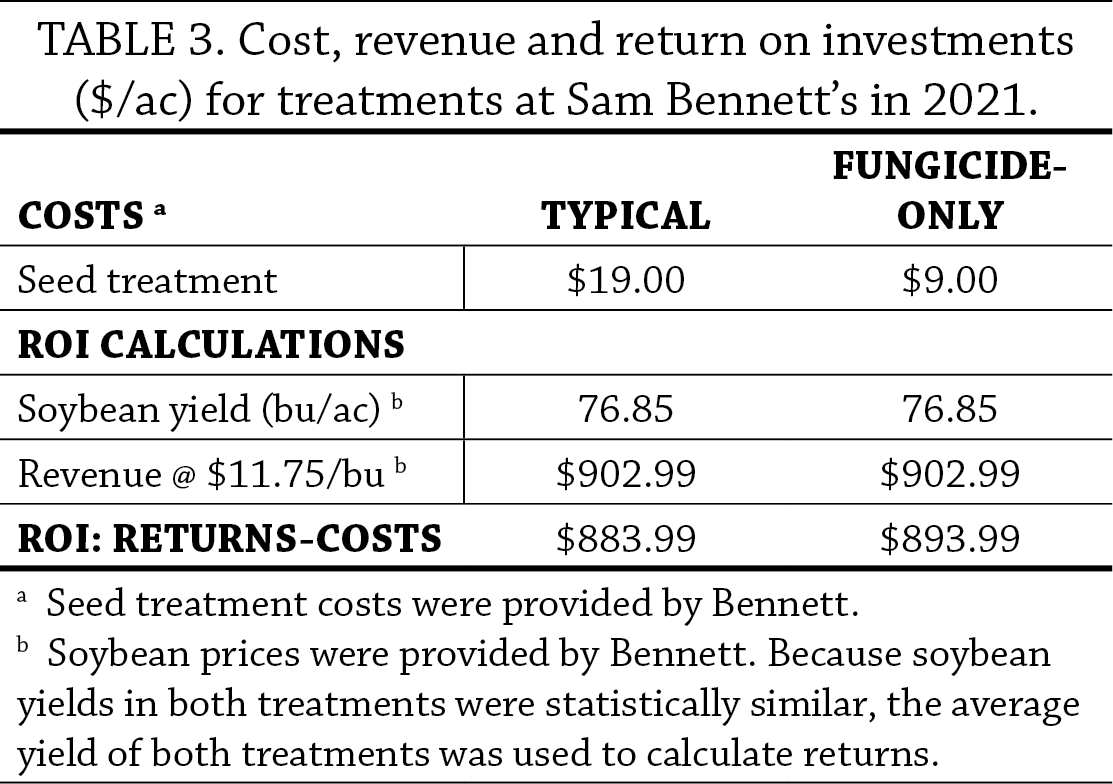 The combined results of Amundson’s, Bennett’s and Saltzman’s data provide evidence that neonicotinoid seed treatments may not be necessary in early-planted soybeans. Likewise, Bennett’s data showed the addition of nematicide to his typical fungicide-insecticide seed treatment provided no benefit to soybean populations or yield. Saltzman remarked, “The findings were about what I expected based on my own non-replicated testing in the past. Contributing empirical evidence that treating soybean seed offers minimal value in most years is the most valuable aspect of conducting this trial.” Although Amundson’s trial didn’t pan out quite as he hoped, he walked away from the trial with valuable data and new ideas to explore and said, “I think we can adjust our seed treatment plans on all crops going forward.” These results enhance an already strong body of literature showing neonicotinoid seed treatments protect soybean yield only in a certain and limited set of circumstances.

FIGURE A1. Sample of experimental designs at Amundson’s and Bennett’s (left) and Saltzman’s (right). Each trial consisted of four or more replications of each treatment. This design allows for statistical analysis of the data.

FIGURE A2. Mean monthly temperature and rainfall and the long-term averages during the trial period at the nearest weather station to each farm.[6](A) Osage (Amundson, about 4 miles away), (B) Holstein, (Bennett, about 8 miles away), and (C) Lenox (Saltzman, about 0 miles away).