To increase the number of corn and soybean acreage planted to cover crops, growers will require strategies for maximizing cover crop benefits while keeping costs low and minimizing yield drag in corn. Unlike soybean seedlings, corn seedlings are particularly sensitive to competition with cover crops for sunlight, water and nutrients, and they run the risk of becoming infected with diseases transmitted from cereal rye if certain management precautions are not taken.[1] Currently, best management practices dictate that a cereal rye cover crop be terminated two weeks prior to planting corn to avoid these risks; however, this shortens the growing period of cereal rye, which may lessen its benefit.

A group of seven PFI cooperators conducted experiments on their farms in 2019 to evaluate strategies intended to maximize cover crop benefit while minimizing costs and damage to a subsequent corn crop.[2]

The cooperators compared combinations of two cereal rye seeding rates (28 lb/ac, 55 lb/ac) and two seeding dates (early, late) and measured their effects on cereal rye biomass, corn yield, rye groundcover, soil health and corn seedling disease. Their objective was to determine if seeding early might allow them to reduce the volume and cost of cover crop seed they plant without sacrificing corn health and cover crop benefits.[3] They also hoped to determine if seeding cereal rye at 55 lb/ac later in the season might be worth the expense and allow them to recuperate any potential losses of cover crop benefits caused by delayed fall planting. 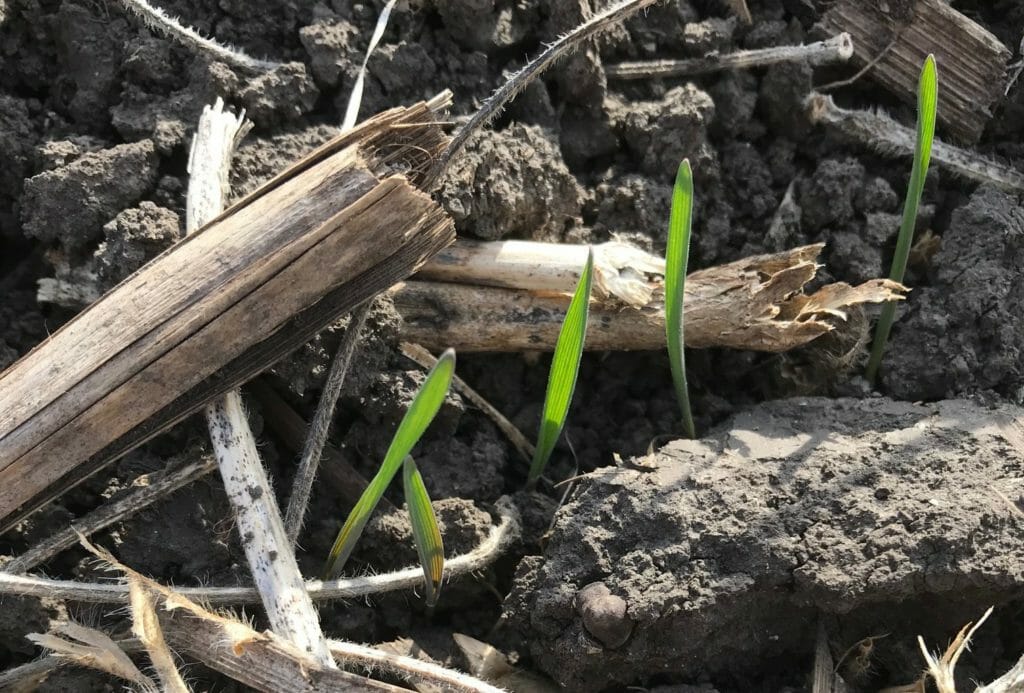 Furthermore, of the two cooperators that had their fields sampled for the presence of corn seedling diseases, both found that neither reducing the seeding rate nor planting later helped to reduce disease pressure in their corn.

Four cooperators conducted this trial again in 2020 to verify findings from the first year. They evaluated the effects of the same treatments (early, late; 55 lb/ac, 28 lb/ac) on cereal rye biomass, soil health, corn yield and profitability.

Weed and nutrient management was unique at each farm and was applied equally to all strips.

Cooperators sampled aboveground cereal rye biomass before or within eight days following the date of terminating rye (Table 3). Samples were collected into paper bags from within quadrats no smaller than 1 ft2 and from a minimum of two arbitrarily placed quadrats in each strip. Rye biomass samples were air-dried then weighed.

Cooperators sampled soil in June (Table 3). In each strip, they collected ten soil cores to a 6-in. depth from randomly selected locations and mixed them thoroughly. Samples were sent to AgSource Laboratories (Ellsworth, IA) to determine the burst of CO2-C released from rewetted soil (Solvita assay).

Cooperators harvested corn individually from each strip and recorded grain yield and moisture (Table 3). Yields were adjusted to standard moisture (15.5%).

Reducing the seeding rate from 55 lb/ac to 28 lb/ac resulted in less rye biomass at three of four farms (Table 4). In Amundson’s experiment, reducing the seeding rate did not result in statistically less rye biomass. This may be related to the uncharacteristically wet fall following planting the cover crop as well as very low moisture throughout April prior to terminating the cover crop on May 3, 2020 (Figure A2). 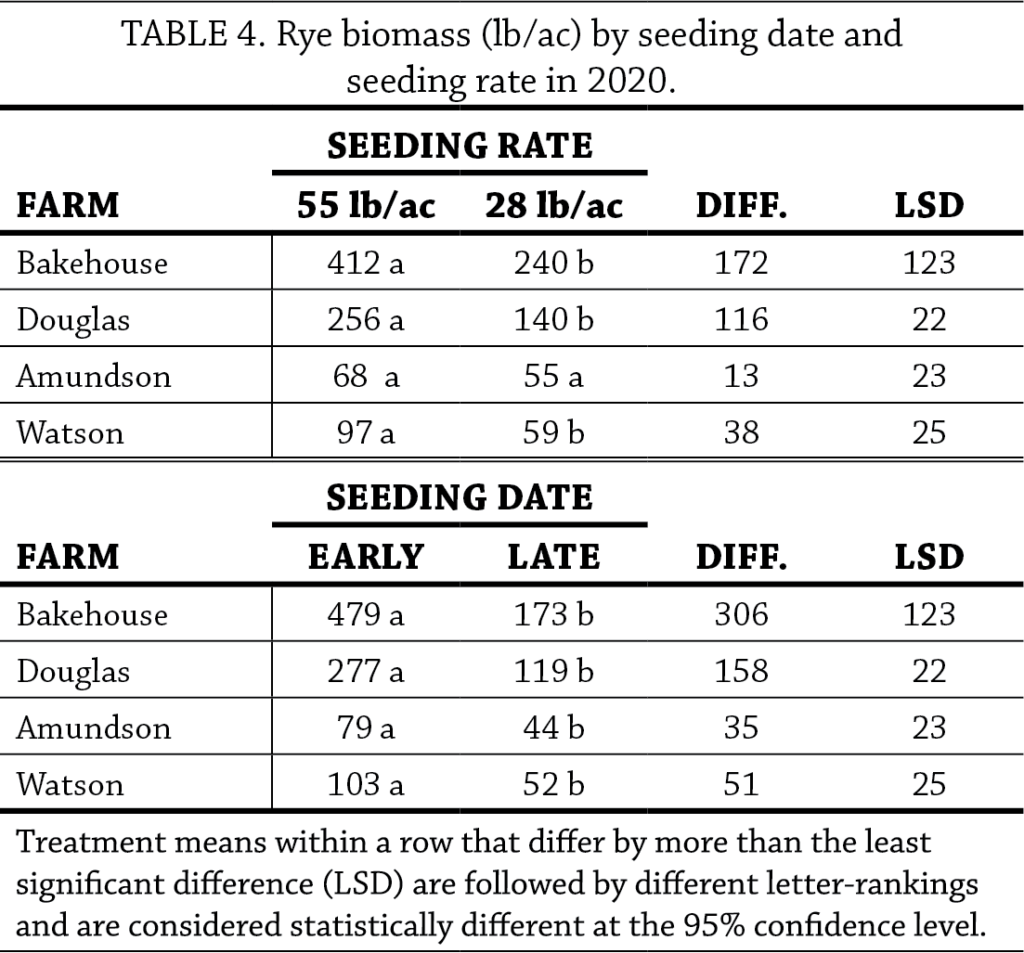 Solvita soil health tests revealed no difference in the burst of soil CO2-C at all farms as a result of reducing the rye seeding rate from 55 lb/ac to 28 lb/ac (Table 5). Delaying planting had no impact on soil health for three farms, but resulted in a statistically smaller burst of CO2-C at Douglas’ farm. 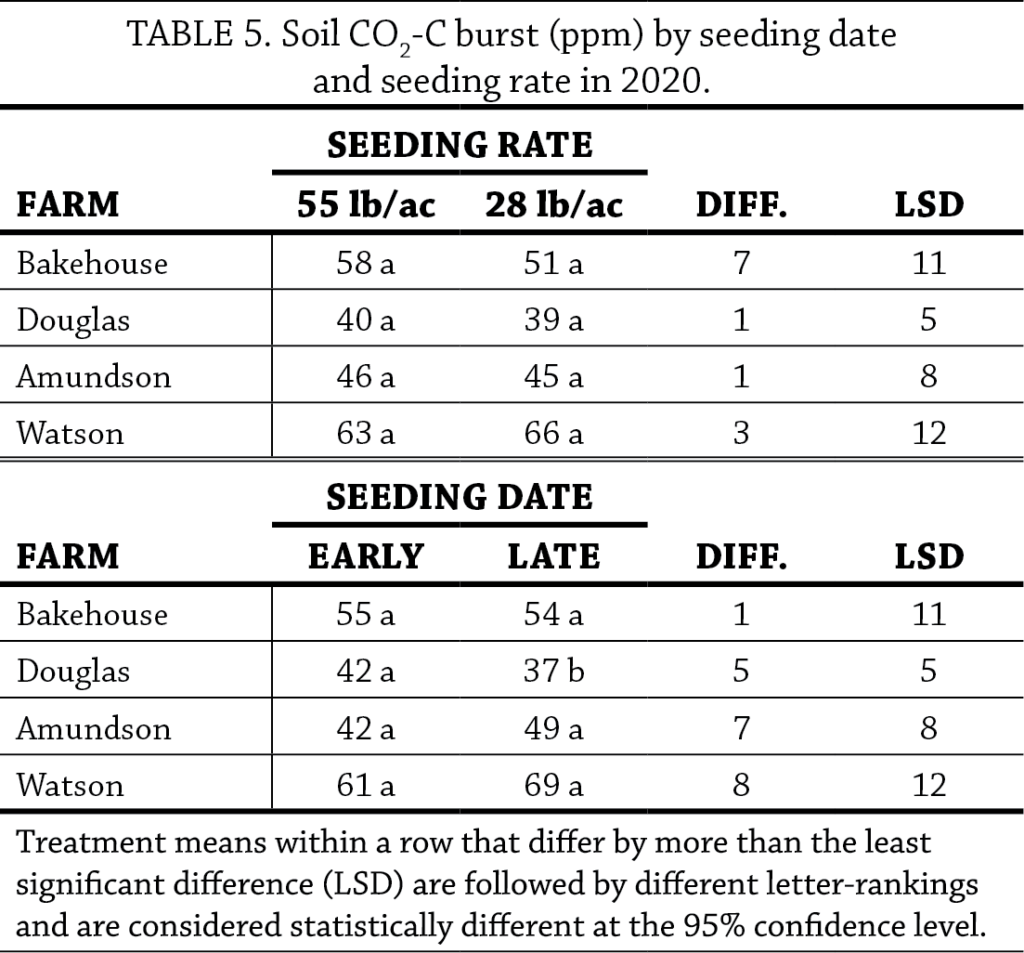 Seeding rye at 55 lb/ac compared to 28 lb/ac led to reduced corn yields at Bakehouse’s farm, while yields at Douglas’ farm were greater in the treatment seeded at 55 lb/ac (Table 6). Corn yields between both seeding rate treatments at Amundson’s farm were statistically similar (Table 4).
Seeding rye later compared to earlier had no effect on corn yields at Bakehouse’s and Amundson’s farms. At Douglas’ farm, yields were greater in the early-seeded rye strips. 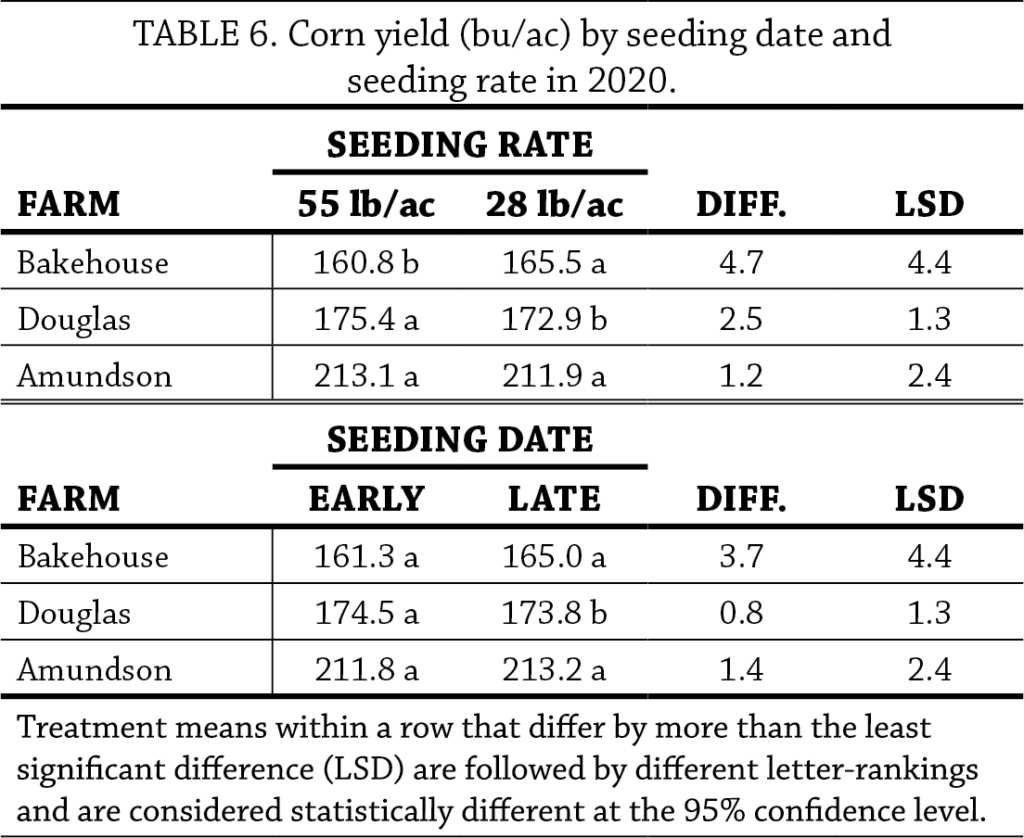 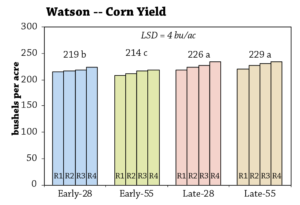 In the first year of these trials, no cooperators were able to reduce the cereal rye seeding rate (and therefore the cover crops costs) without sacrificing rye biomass.[2] Seeding rye early and at the full rate was necessary to generate maximum cover crop biomass and did not negatively impact corn yield. Results from the second and final year of these trials are mixed.

In 2020, one cooperator (Amundson) was able to reduce the seeding rate of rye from 55 lb/ac to 28 lb/ac without sacrificing rye biomass, soil health or corn yield, whereas reducing the seeding rate at the remaining three farms (Bakehouse, Douglas, Watson) did result in less biomass. At Bakehouse’s farm, greater biomass generated in the full-rate strips translated to reduced corn yields, and the opposite was true at Douglas’ farm, where greater biomass in the full-rate strips translated to greater corn yields. At Watson’s farm, the trend of rye seeded at a reduced rate resulting in less rye biomass appeared in his corn yields as greater yields where rye was seeded early at the reduced rate versus early at the full rate; however, where rye was seeded later, seeding rate had no impact on corn yield.

Seeding rye earlier compared to later consistently resulted in greater biomass for cooperators in 2020, as it did in 2019. Only one cooperator (Douglas) experienced a co-occurring increase in soil health due to seeding earlier in 2020. Douglas was one of only two cooperators who experienced greater corn yields where rye was seeded later. At Watson’s farm, corn yields were greatest where rye was seeded late irrespective of the seeding rate, and corn yields were lowest where rye biomass was seeded early and at the high rate. For Bakehouse and Amundson, seeding rye earlier generated greater biomass without sacrificing corn yield.

Based on the results generated by 12 cooperator experiments over two years, reducing rye seeding rates may not be an effective solution to reduce cover crop costs. Seeding at the reduced rate resulted in less rye biomass in most experiments. Whether or not seeding rye at the full rate may help a grower to generate the same amount of biomass when weather or other circumstances delay planting as compared to seeding rye at either rate earlier in the season is not clear from these experiments. The only farm for which an economic analysis could be conducted showed greater returns on investments from seeding later at the reduced rate compared to seeding earlier; however, this does not take into account any potential long-term financial benefits that cover cropping has been shown to provide.

FIGURE A1. Sample experimental design used by the cooperators. The design includes at least four replications of the seeding-date and seeding-rate treatment combinations (16 strips total). This design allowed for statistical analysis of the results. 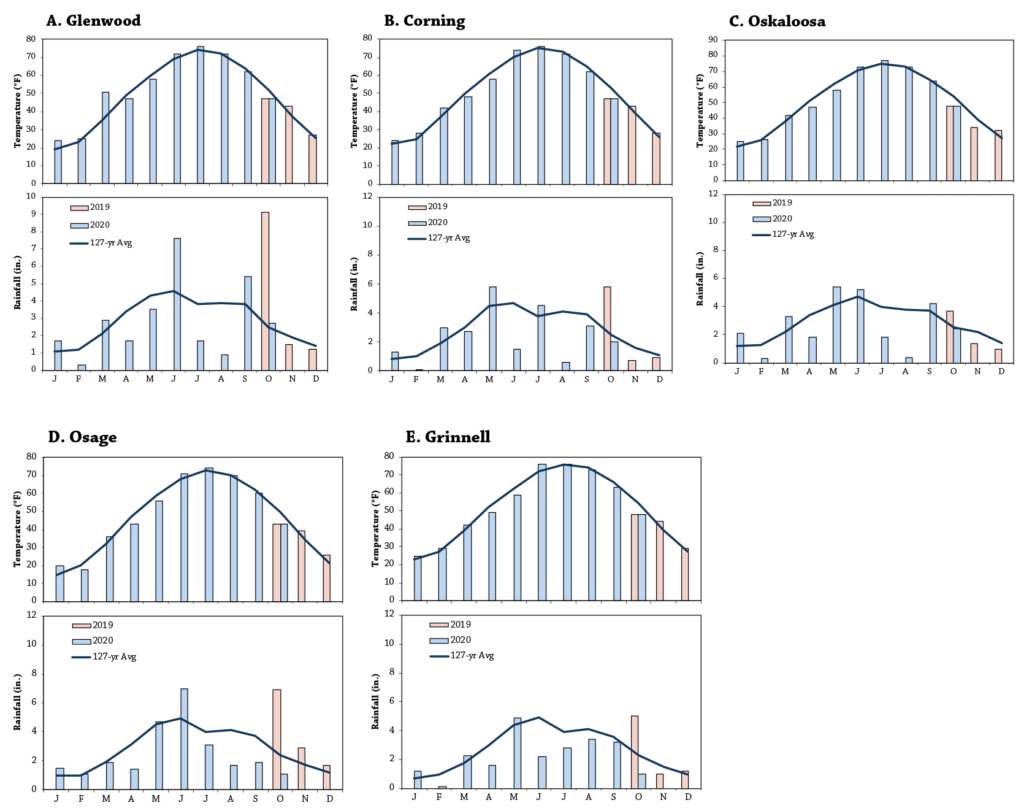 FIGURE A2. Mean monthly temperature and rainfall during the study period and the long-term averages at the nearest weather stations to each farm.[6] A) Glenwood (Bakehouse, about 14 miles away); B) Corning (Douglas, about 11 miles away); C) Osage (Amundson, about 4 miles away); D) Grinnell (Watson, about 13 miles away).