This research was funded by the Iowa Natural Resource Conservation Service (NRCS).

“We wanted to determine the economic and soil health impact of the fields where we contract graze. This is something we’ve been doing for a few years and we wanted to quantify the benefits for our neighbor Tim,” said Nick Smith, who grazes cover crops and corn stalks in a field owned by his neighbor, Tim Daly. Not only do cover crops protect the soil, but profits can be achieved when livestock graze cover crops.[1,2] It is also known that grazing cover crops can provide benefits to soil health, but the effects are longer term [1] and require proper grazing management. To determine the impact of the practice, Smith and Daly compared economics and soil health data between fields that were managed differently between fall 2019 and spring 2021.

In order to determine the effects on economics and soil health on cover crop and grazing management, Smith and Daly established three treatment fields:

In September 2019 and 2020, Daly aerial seeded a cover crop mix that consisted of oats (38 lb/ac), cereal rye (56 lb/ac) and radish (2 lb/ac) on 350 acres. As soon as the crop fields were harvested each fall, cattle were turned out in the ‘grazed cover crops’ field only. Grazing commenced in October each year and different fields were grazed until February or March. Spring grazing took place between mid-April and late May.

The value of feed replaced by grazing assumes cattle would have been fed hay valued at $150/ton if cover crops were not available to graze. The tool takes into account number of cattle grazed, average weight of livestock, number of grazing days and cooperator estimates of dietary needs provided by supplemental feed and crop residue. The tool assumes cattle consume 4% of their bodyweight in forage dry matter (DM) each day (2.5 to 3.0% intake, 0.5% trampling loss and 0.5-1.0% buffer).[4] All formulas are nested within the tool. 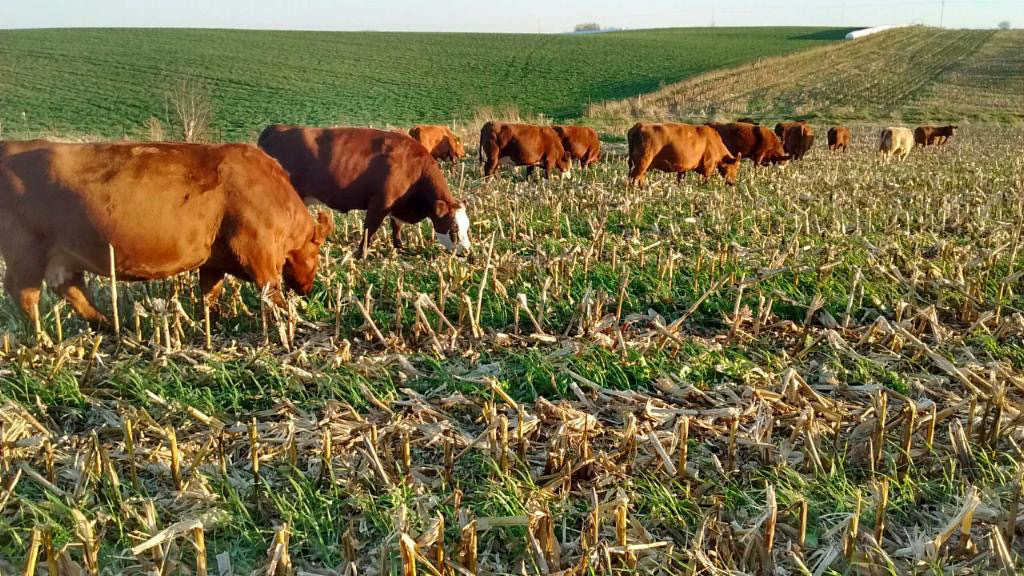 Cows on cover crops and corn stubble in the early winter of 2020.

Soil samples were collected by Smith in April 2020 and 2021 in all three treatment fields to a depth of 6 in. Soil sample locations were marked by GPS and taken within the same soil type, within 100 yards of one another.

The economic results are presented by year and by farmer (Table 1). Total savings are shown for both Smith and Daly, in order to illustrate the impact to both the grazier and the row-crop farmer. “Tim pays for the establishment of cover crops and I reimburse him for half of the cost,” explained Smith. Daly also incurs a $4.50/ac termination cost that he would not have if no cover crops were planted. 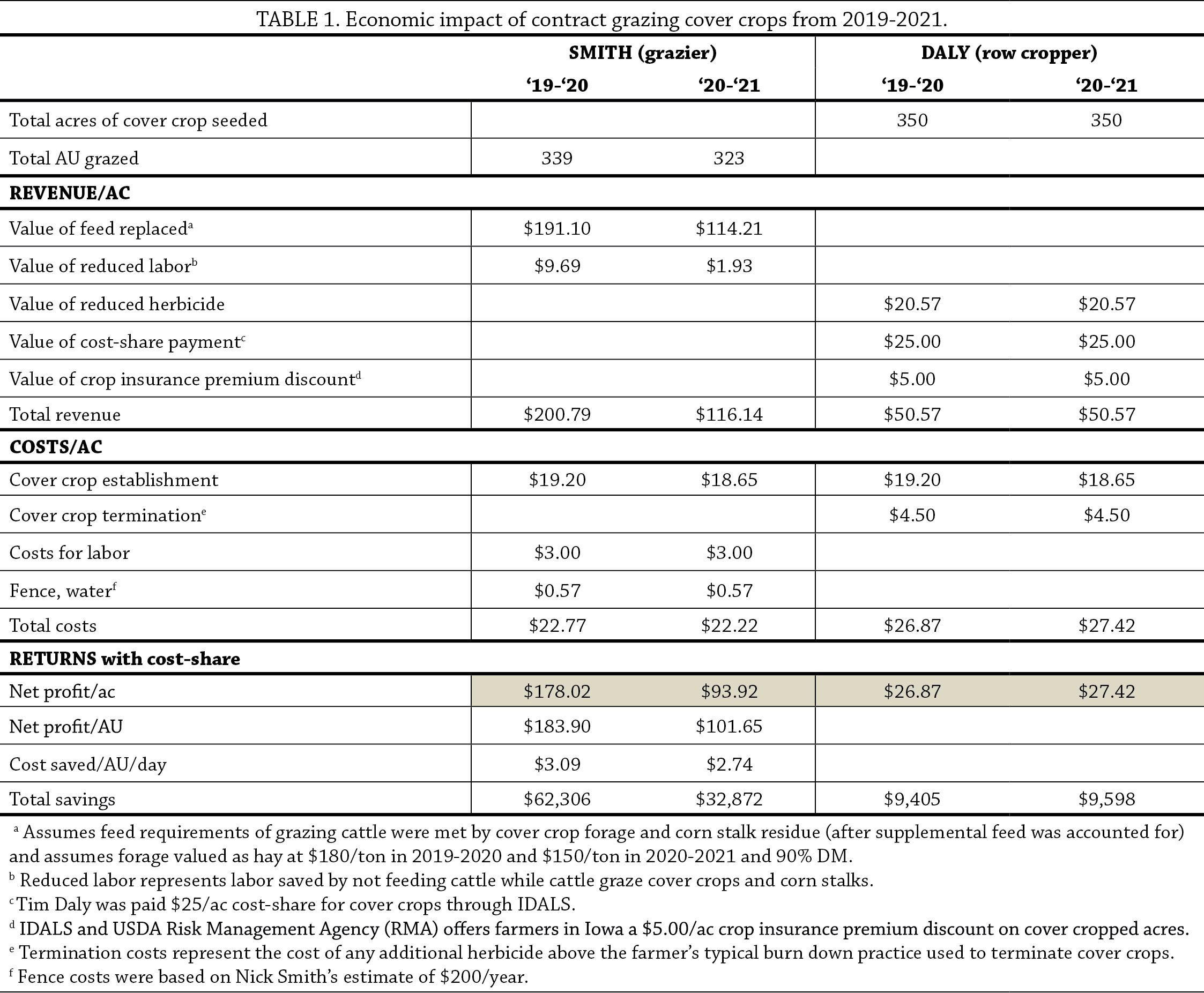 On average, cover crop establishment cost $37.85/ac. Smith’s profits from grazing averaged $158.47/ac due to the amount of feed replaced by grazing cover crops and the labor he was able to save by not having to feed cattle. The labor required for grazing, which consisted of putting up single strand electric wire and moving cattle from paddock to paddock, was included in the analysis. Grazing profits were greater in 2020 than in 2021. “Hay was quite a bit cheaper this year (2021) compared to last year because of weather conditions,” explained Nick; he reported hay costs of $180/ton in 20201 and $150/ton in 2021.

“When it’s all said and done, I saved $2.92 per AU per day versus what it would cost to feed cattle in a dry lot scenario,” said Smith. This is an important finding considering winter feed costs represent the single largest cost in cattle operations.[5] Grazing cover crops can reduce winter feed costs.

Daly’s profits averaged $27.14/ac. This was due to the cost-share payments and crop insurance discounts he received for planting cover crops ($25/ac from the Iowa Department of Land Stewardship and Agriculture (IDALS) and $5/ac as a crop insurance discount). Without cost-share, Tim would have incurred an average $2.85/ac loss. Tim said that he reaps savings that were not quantified in the study because he “is able to get away with one herbicide pass during the crop growing season due to cover crops suppressing weeds.” Tim also looks towards long-term soil health benefits from the cover crops and grazing that make the practice worth it to him. 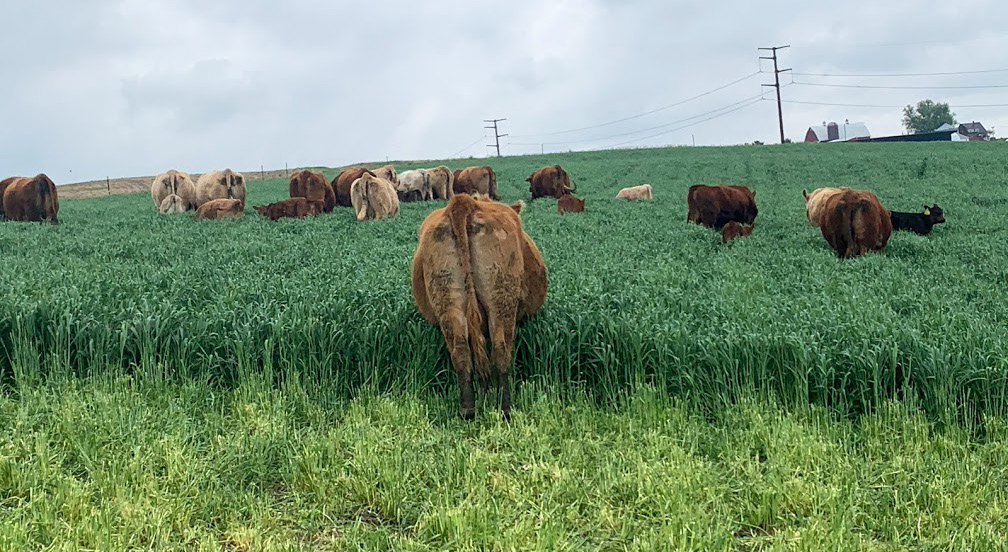 Cereal rye that has been grazed versus ungrazed. Shown on May 3, 2021.

In 2020, the grazed cover-crop field showed the most microbial respiration while the no-cover-crop field showed the least (Figure 1). In 2021, however, results showed no statistical difference among the three fields; though, we saw the same numerical pattern as in 2020. The lack of statistical differences in 2021 could be attributed to more variation seen in the results relative to those in 2020 (this is indicated by the points within the bars in Figure 1). 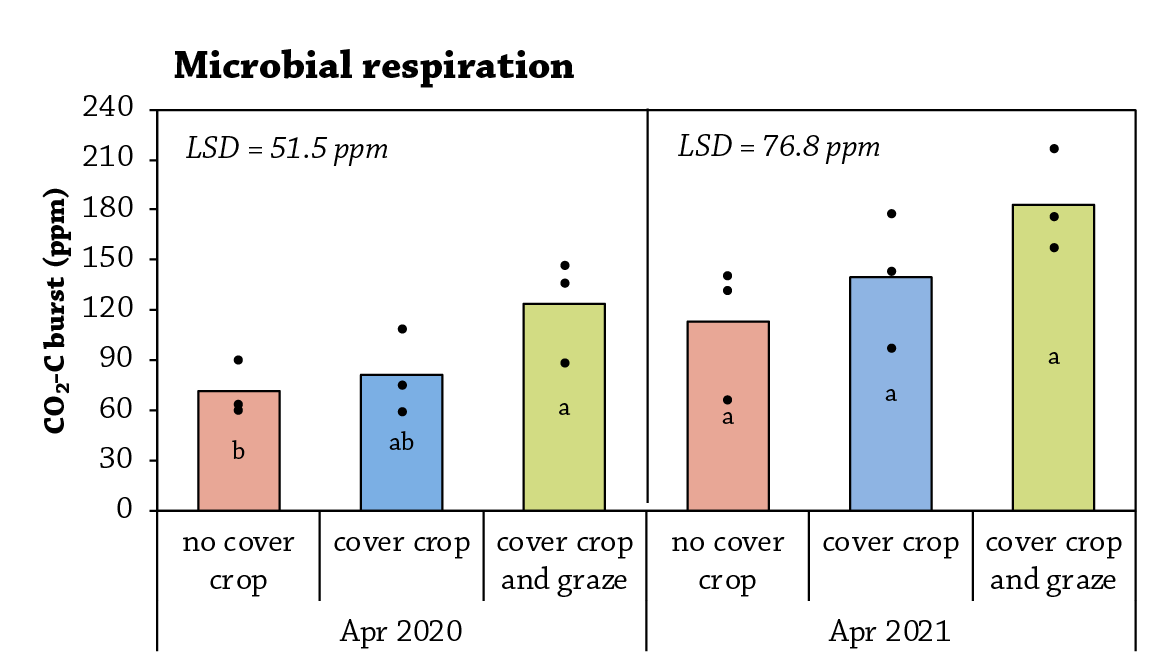 FIGURE 1. Soil microbial respiration (CO2-C burst from soils) for each field in April 2020 and 2021. By year, results that differed by more than the least significant difference (LSD) are considered statistically different at the 90% confidence level. We indicate differences with letter-rankings. Results followed by the same letter-rankings and are considered statistically equal.

At both sampling dates, we detected no differences in active carbon among the three fields (Figure 2). 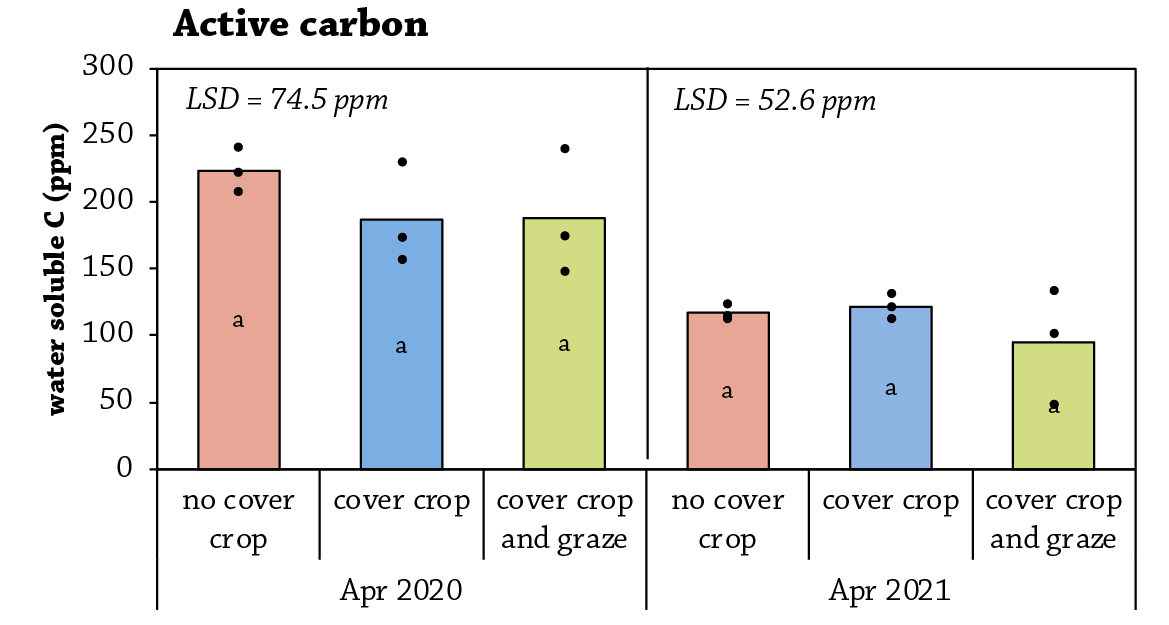 FIGURE 2. Active carbon (water soluble carbon) for each field in April 2020 and 2021. By year, because results did not differ by more than the least significant difference (LSD), we considered the fields statistically similar at the 90% confidence level. 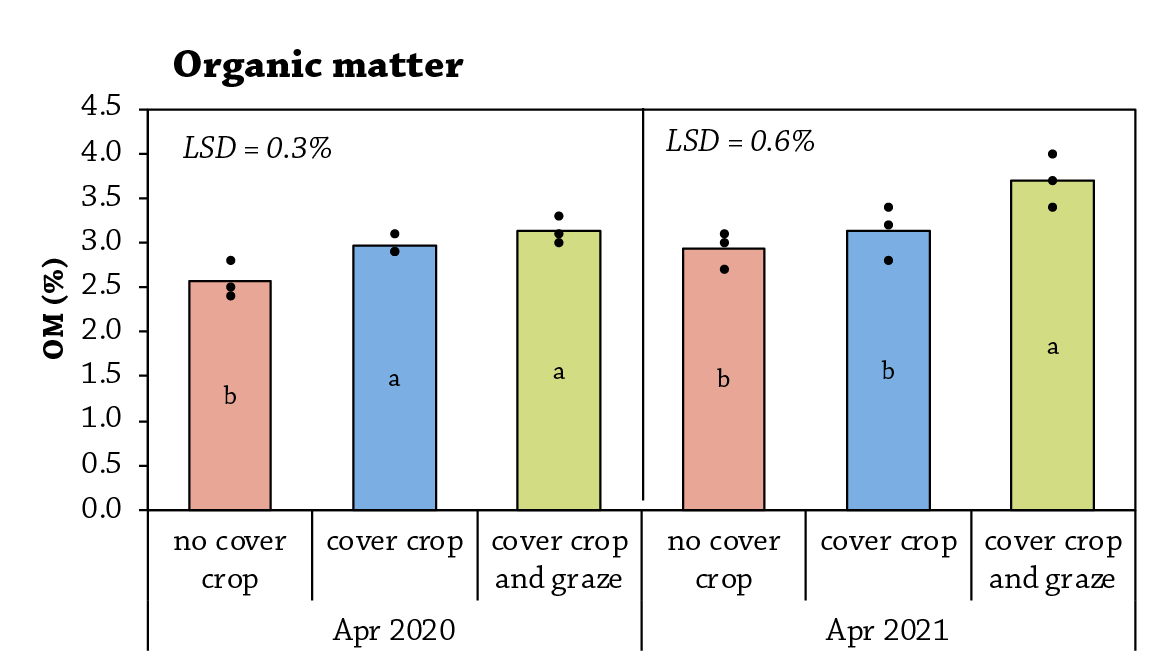 FIGURE 3. Soil organic matter (OM) for each field in April 2020 and 2021. By year, results that differed by more than the least significant difference (LSD) are considered statistically different at the 90% confidence level. We indicate differences with letter-rankings. Results followed by the same letter-rankings and are considered statistically equal.

Figure 4 shows a strong relationship between OM and microbial respiration; with more OM, microbial respiration increases. This suggests that farmers who wish to improve soil health metrics in their fields should incorporate practices that promote increasing OM. These include maximizing living roots, minimizing soil disturbance and incorporating livestock, which Smith and Daly are actively doing. 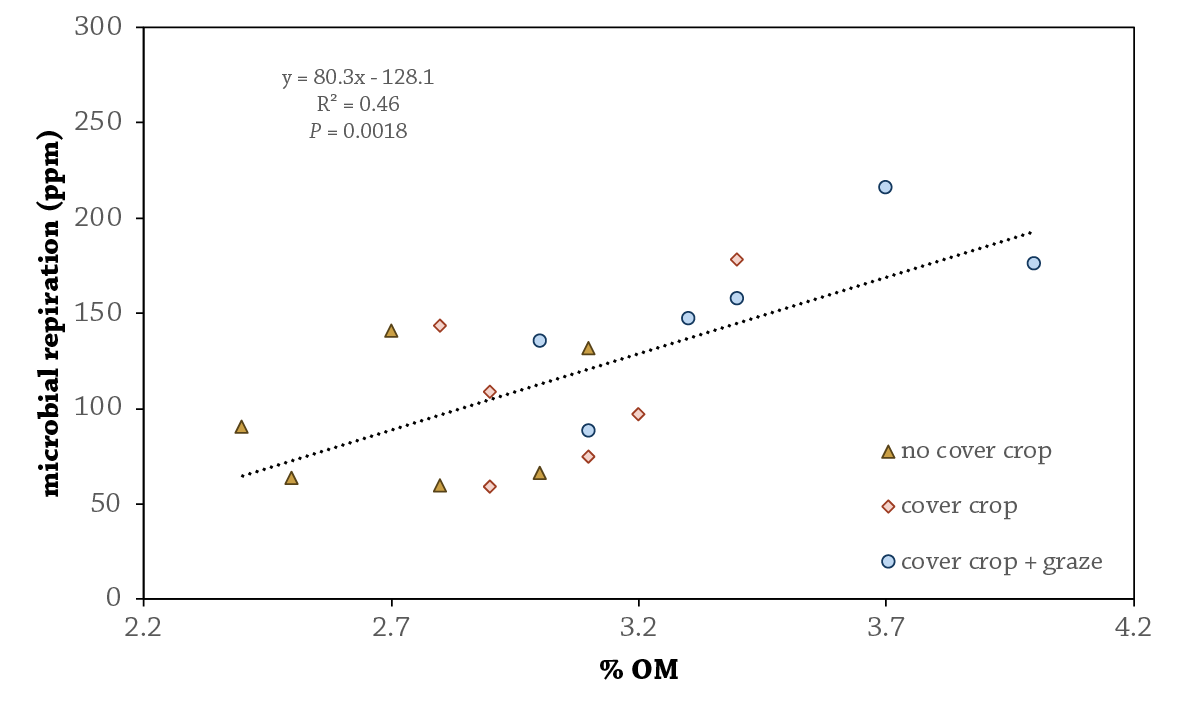 FIGURE 4. Relationship between soil organic matter (OM) and microbial respiration (CO2-C burst) across all samples from each field in 2020 and 2021.

The economic results from this project show that contract grazing cover crops can provide short-term economic benefits and pay off in one year. The row-crop farmer in this arrangement would not have profited without cost-share, but Daly claims he reaps economic benefits later in the season by saving herbicide due to less weed pressure. The preliminary soil health benefits measured in this study are promising and may translate to economic profits in the future. Next, Smith would like to try interseeding different mixes of cover crops for early growth and more biomass. “We’re figuring out ways to be as efficient as we can with these fields.” 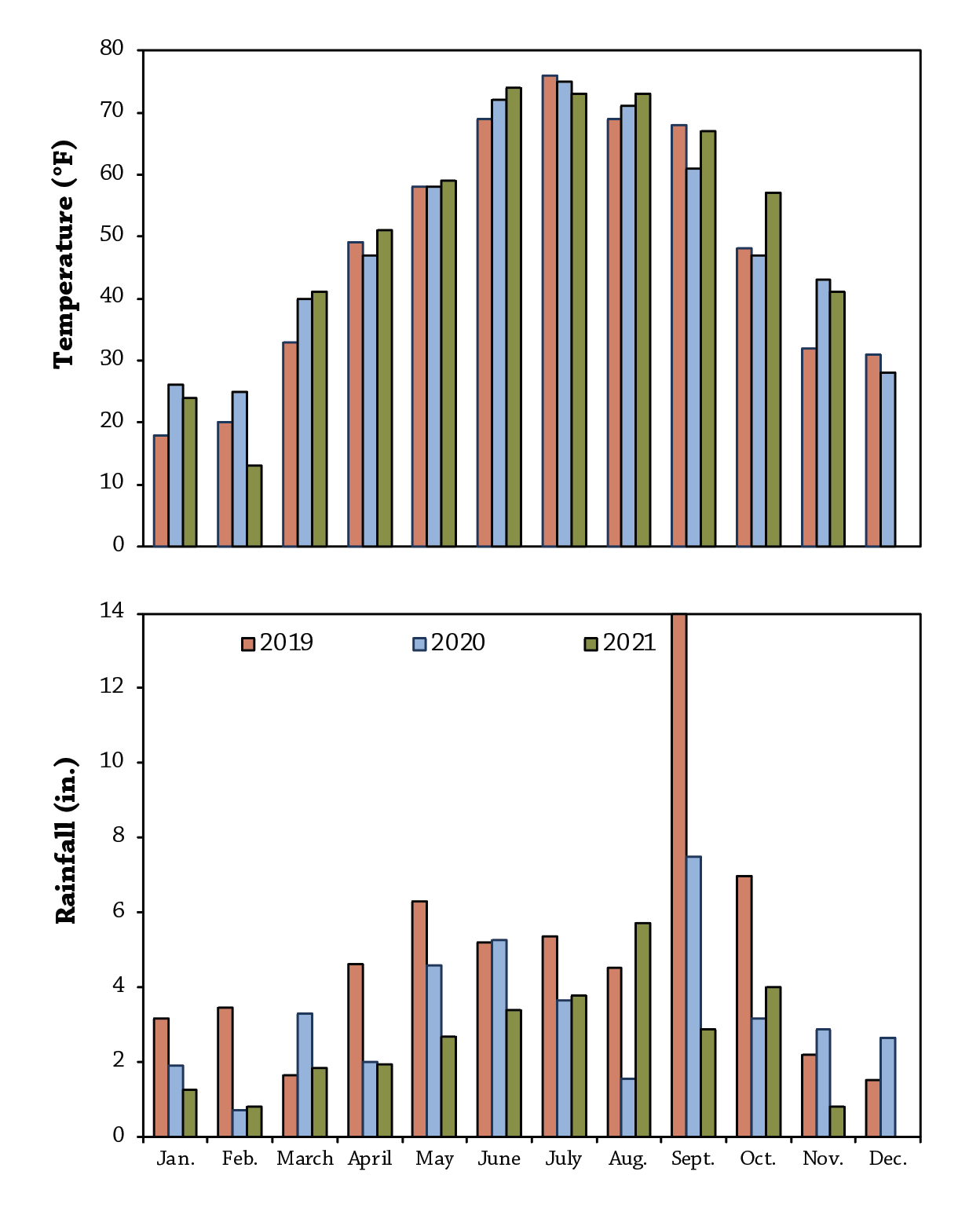