This research was funded by USDA-NIFA.

Most recommendations suggest terminating a cover crop at least 10 days before planting corn to avoid early-season deficiencies of soil moisture and soil N. On-farm strip trials by PFI cooperators between 2016 and 2018 backed up those recommendations. In those trials, cooperators reported significant corn yield reductions (2 to 14%) when cover crops were terminated within two days of planting corn.[1–3] Recent scientific evidence points to corn seedling disease as the culprit for yield dag when planting corn soon before or soon after terminating a cover crop.[4] Contrary to these research findings, some farmers report no problems when planting corn before terminating a cover crop. (Otherwise known as planting green.) In these cases, the cover crops were typically only a few inches tall at the time of corn planting. Many farmers experienced with using cover crops stress the importance of applying N fertilizer with the corn planter for alleviating the potential for yield drag when planting green. The appeal to planting green is that the practice allows the cover crop to grow longer into the spring and thus enhancing the soil and water conservation benefits a cover crop provides. 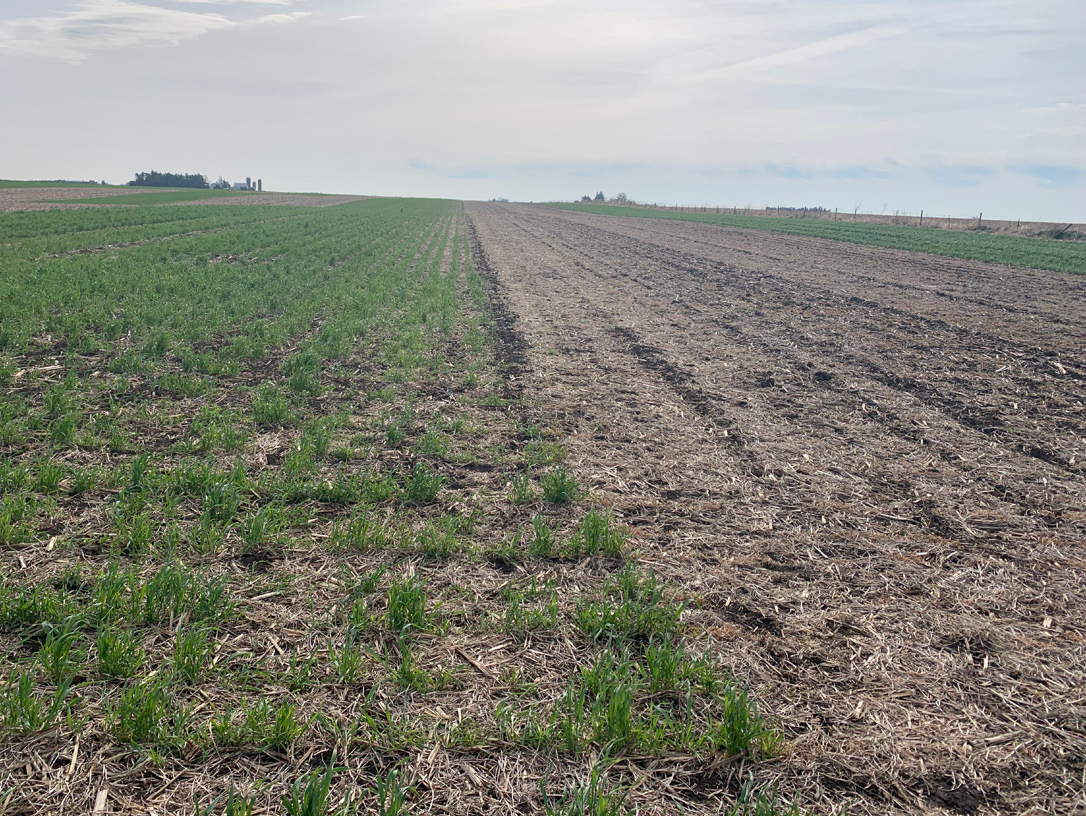 In 2020, Jack Boyer, Eric Fynaardt, Kevin Holl and Rob Stout conducted the first iteration of this project with only Fynaardt observing reduced yields from planting green.[5] They each repeated the trial in 2021 in order to further explore their interests (as well as many other farmers’ interests) in planting corn to a green cover crop.

To test the effect of cover crop termination date on corn, each cooperator compared two treatments:

Actual cover crop termination dates at each farm is provided in Table 2.

Cooperators measured cover crop height and groundcover at both termination dates. To determine groundcover, cooperators took photographs from three to four locations in each strip and then we analyzed them using Foliage, an open-source web-based application.[6]

All cooperators harvested corn from each individual strip, except for Stout because a high-wind incident in August made it impossible to detect individual cornrows and strips. Grain yields from Boyer’s, Fynaardt’s and Holl’s were corrected to 15.5% moisture.

FIGURE 1. Cover crop height (A) and groundcover (B) as affected by cover crop termination date at each farm in 2021. By farm, letters above columns indicate whether differences were greater than the least significant difference (LSD) at the 95% confidence level. Number of days between termination dates, by farm: Boyer, 14 days; Fynaardt, 11 days; Holl, 20 days; Stout, 18 days. Click to enlarge. 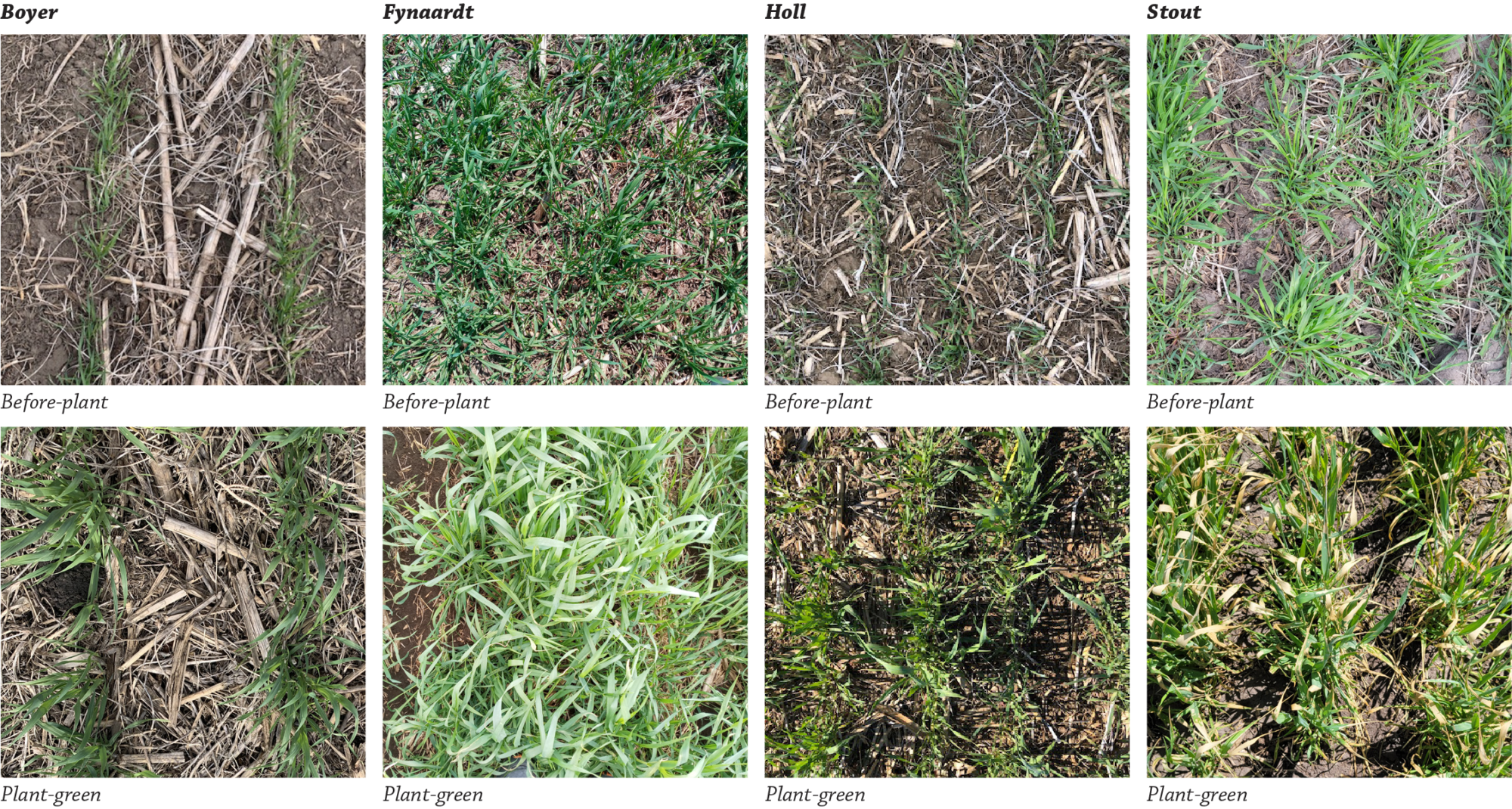 From left to right, photos from Boyer’s, Fynaardt’s, Holl’s and Stout’s of cover crops from the before-plant (top) and plant-green (bottom) treatments used to assess groundcover. Note the browning of the cover crop from termination four days prior in the plant-green treatment at Stout’s (far right, bottom photo). Click to enlarge. 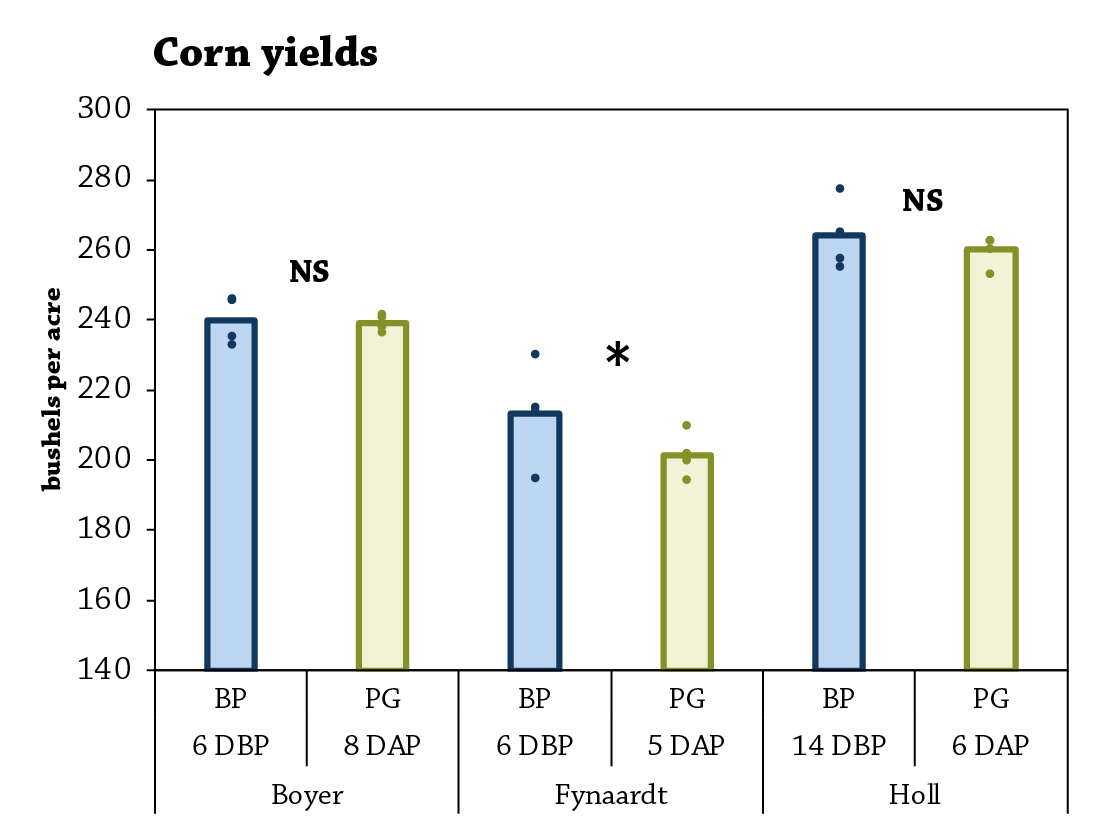 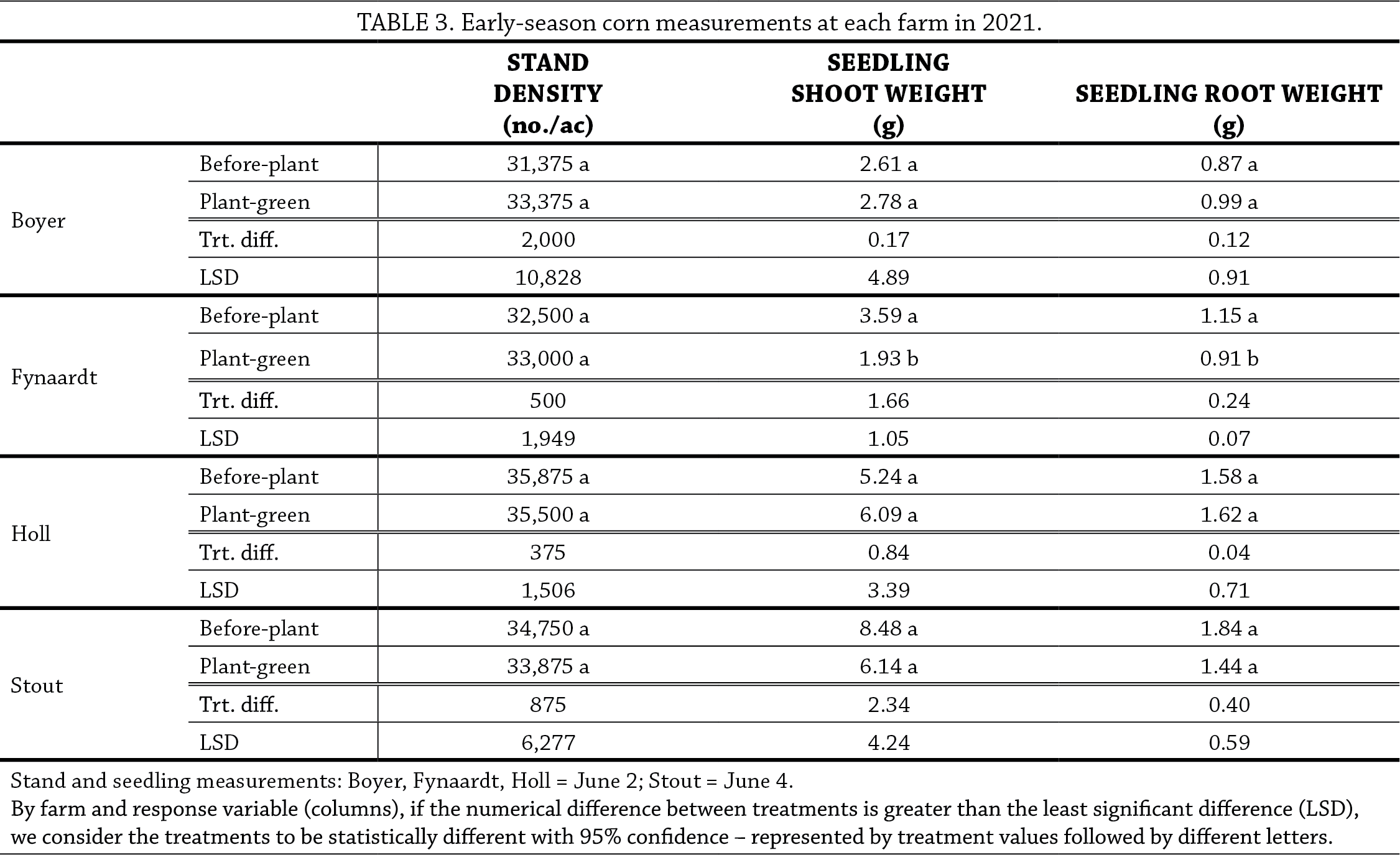 In mid-September, Dr. Robertson’s lab group returned to the farms to determine the number of barren plants and assess the amount of stalk rot in each strip. At none of the farms did they detect an effect of cover crop termination date on these late-season measurements. 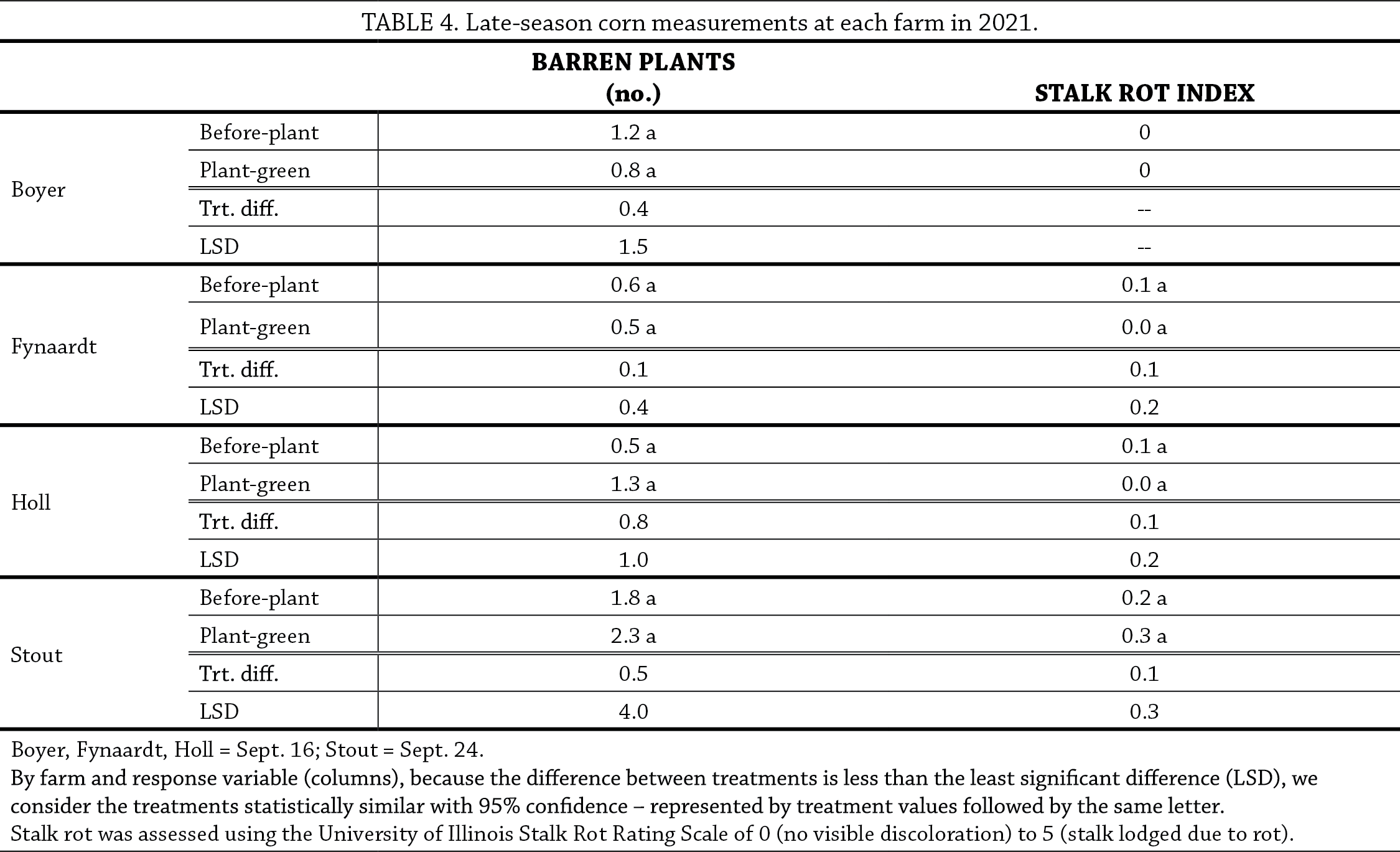 Previous research in Iowa by Dr. Robertson’s lab linked planting green to reduced corn stands, increased number of barren plants and reduced corn yields.[4] They attributed these findings to increased levels of seedling disease compared to where the cover crop was terminated at least 10 to 14 days prior to planting corn. Yearly and seasonal variation as well as crop management can influence the prevalence of crop pathogens (such as Pythium and Fusarium species that cause seedling disease in corn). In this year’s study, conditions at Boyer’s, Holl’s and Stout’s farms may not have been suitable for corn seedling disease pathogens regardless of cover crop termination date.

After two years of study, planting green did not reduce yields in five of seven instances. In the remaining two instances, both of which occurred at Fynaardt’s, planting green statistically reduced corn yields by 5–6%. From samples collected at all farms over the two years, Dr. Robertson’s lab detected evidence of corn seedling disease only once: at Fynaardt’s in June 2021 from the plant-green treatment. In both years, it appeared that corn at Fynaardt’s emerged through much more cover crop in the plant-green treatment compared to the other farms. The reduced corn yields he observed may have been due to early-season competition for resources between the cover crop and the corn, seedling disease pressure or both.

Boyer, Holl and Stout learned that planting green may in fact be a viable practice for their farms going forward. Each of them is keen to allow a cover crop to grow as long as possible in the spring (up until corn planting) in order to maximize soil health benefits. From their results, the sweet spot for success might involve a cover crop that is no more than a foot tall as well as the ability to apply at least 30 units of N/ac with the planter.

FIGURE A1. Sample experimental design used by the cooperators. The design includes replications of the two cover crop termination date treatments. This design allowed for statistical analysis of the results.

FIGURE A2. Mean monthly temperature and rainfall for 2021 and the long-term averages at the nearest weather stations to each farm.[7] A) Grundy Center (Boyer); B) Newton (Fynaardt); C) Marshalltown (Holl); D) Washington (Stout).