Most recommendations suggest terminating a cover crop at least 10 days before planting corn to avoid early-season deficiencies of soil moisture and soil N. Recent scientific evidence warns also of the potential for corn seedling disease as the time between cover crop termination and corn planting narrows.[1] On-farm strip trials by PFI cooperators between 2016 and 2018 have reported significant corn yield reductions (2 to 14%) when cover crops were terminated within two days of planting corn.[2–4] Despite recommendations and contrary to these research findings, some farmers anecdotally report no problems when planting corn soon before or soon after terminating a cover crop. (Otherwise known as planting green.) Jack Boyer, Eric Fynaardt, Kevin Holl and Rob Stout have all planted green a few times in recent years and that is why each of them participated in this project. “There has been much discussion about cereal rye before corn, and its potential problems,” Boyer said. “This trial may help understand those concerns.” Fynaardt added: “We have been planting corn green for last few years but have had no side by side comparison of early termination. [A strip trial] will provide nice information for comparison.” 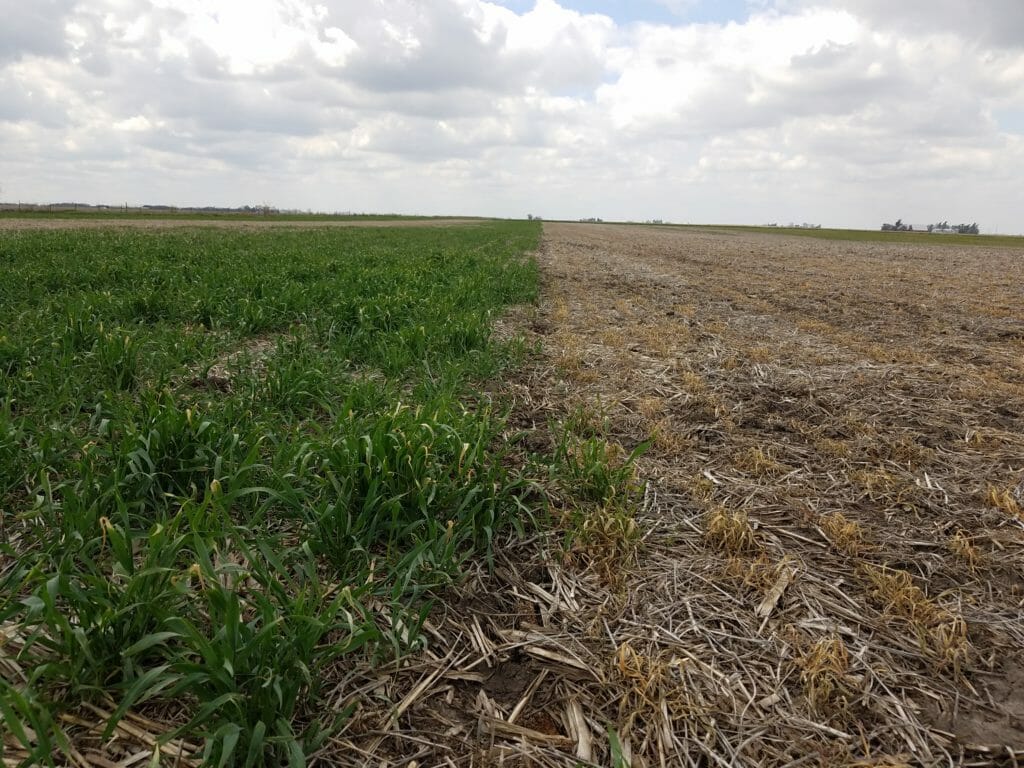 Each cooperator planted corn in 2020 and field management at all farms is provided in Table 1. 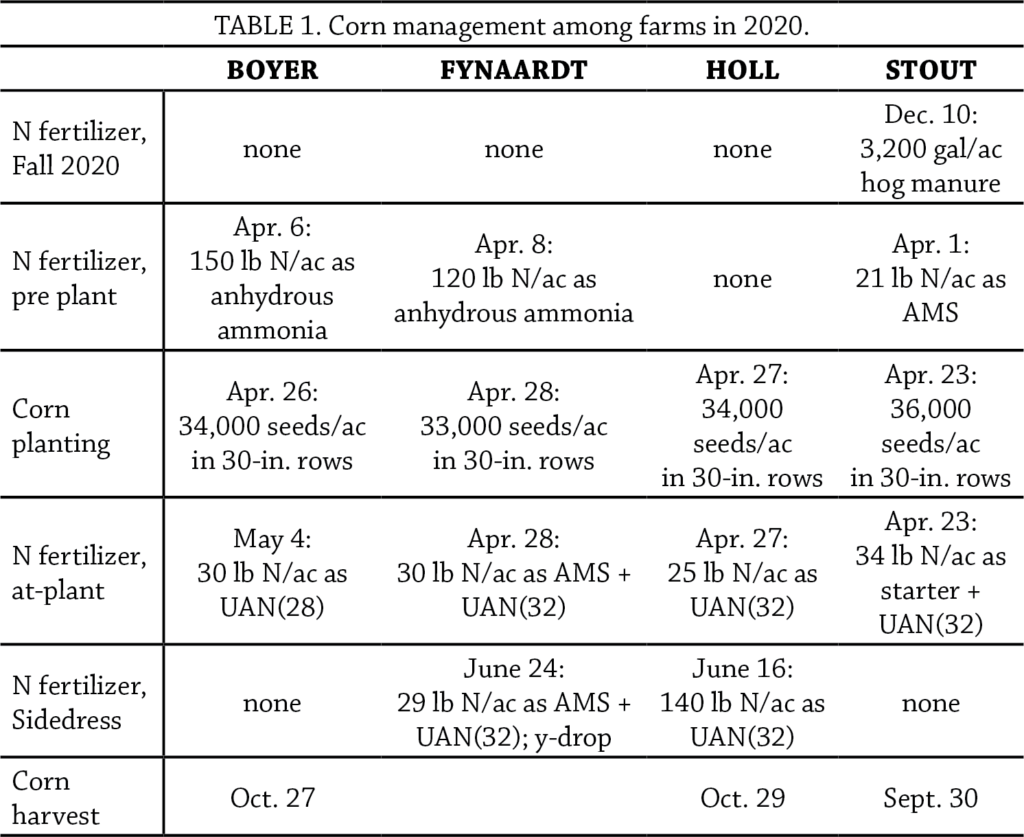 To test the effect of cover crop termination date on corn, each cooperator compared two treatments:

Actual cover crop termination dates at each farm is provided in Table 2. 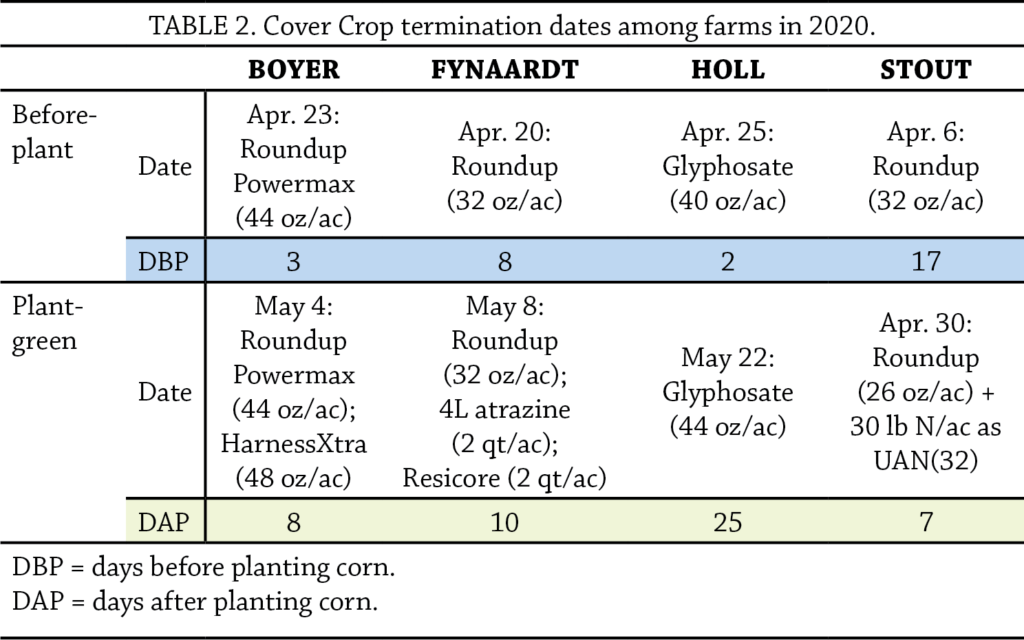 Dr. Alison Robertson’s lab group travelled to each farm on May 29, 2020 to determine corn stand densities, corn seedling shoot weights and corn seedling root weights. The lab group assessed barren plants and stalk rot incidence at Boyer’s on Sept. 23 and Stout’s on Sept. 24. Severe lodging due a high-wind storm (derecho) in August precluded these measurements at Fynaardt’s and Holl’s.

All cooperators harvested corn from each individual strip and grain yields were corrected to 15.5% moisture.

Boyer, Holl and Stout observed no statistical differences in corn yield between the two cover crop termination dates (Figure 1). Fynaardt, on the other hand saw a 12 bu/ac decline in corn yield where he planted green compared to where he terminated the cover crop prior to planting corn. Corn yields at Boyer’s and Stout’s were above or at their respective county five-year averages (Grundy: 210 bu/ac; Washington: 203 bu/ac).[5] Corn yields at Fynaardt’s and Holl’s, however, were 10 to 20 bu/ac below their county five-year averages and likely owing to wind damage that occurred during the derecho in mid-August (Poweshiek: 209 bu/ac; Marshall: 215 bu/ac).[5] 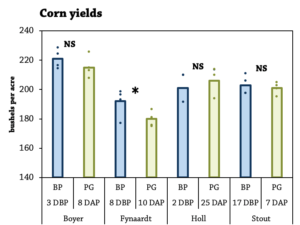 Previous on-farm research by PFI cooperators has documented “yield drag” when planting green, similar to what Fynaardt observed in 2020. In these previous trials, cover crop biomass levels ranged from 2,000 to 5,000 lb/ac when those farmers planted green, which represented a two- to five-fold increase in biomass compared to when cover crops were terminated at least 15 days before planting corn.[2–4] As the photos from Fynaardt’s farm on May 22 indicate, the corn that was planted green emerged through far more cover crop residue; that early-season competition may have slowed corn seedling development and ultimately resulted in the statistical yield reduction.

All four farmers applied at least 25 lb N/ac near the time of corn planting (Table 1). This practice is intended to alleviate early-season soil N depletion by a cover crop that can hamper corn seedling development. At Boyer’s (the only farm at which cover crop biomass samples were collected), he observed only 43 lb/ac in the before-plant treatment and 112 lb/ac in the plant-green treatment. This relatively low amount of cover crop growth may have been one reason why Boyer did not observe yield differences between the two termination dates. At Fynaardt’s, it could be that the amount of cover crop growth that occurred in the plant-green treatment was too much to overcome despite applying N at planting.

In late May, Dr. Robertson’s lab group observed no effect of the cover crop termination date on corn stand density, corn seedling shoot weight and corn seedling root weight at each of the four farms (Table 3). 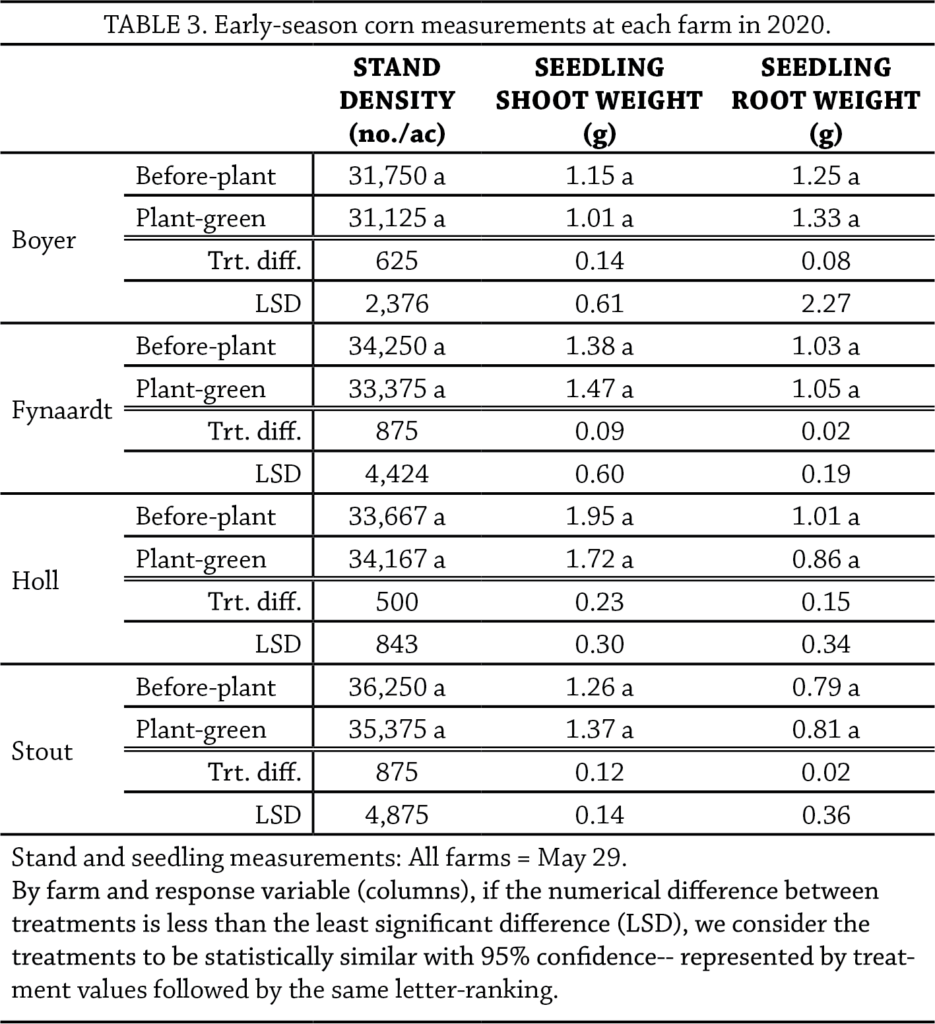 Dr. Robertson’s lab group returned to the farms in September to assess barren corn plants and stalk rot. They were only able to make these observations at Boyer’s and Stout’s because wind damage from a derecho in August made sampling too difficult at Fynaardt’s and Holl’s (e.g., field were inaccessible due to bent, “goose-necked” corn stalks).

At Boyer’s and Stout’s, there were no effects of cover crop termination date on the number of barren plants or signs of stalk rot (Table 4).

Previous research in Iowa by Dr. Robertson’s lab linked planting green to reduced corn stands, increased number of barren plants and reduced corn yields.[1] They attributed these findings to increased levels of seedling disease compared to where the cover crop was terminated at least 10 to 14 days prior to planting corn. According to Dr. Robertson, yearly and season variation as well as crop management can influence the prevalence of crop pathogens (such as Pythium and Fusarium species that cause seedling disease in corn). In the present study, conditions at the four farms may not have been suitable for corn seedling disease pathogens regardless of cover crop termination date. 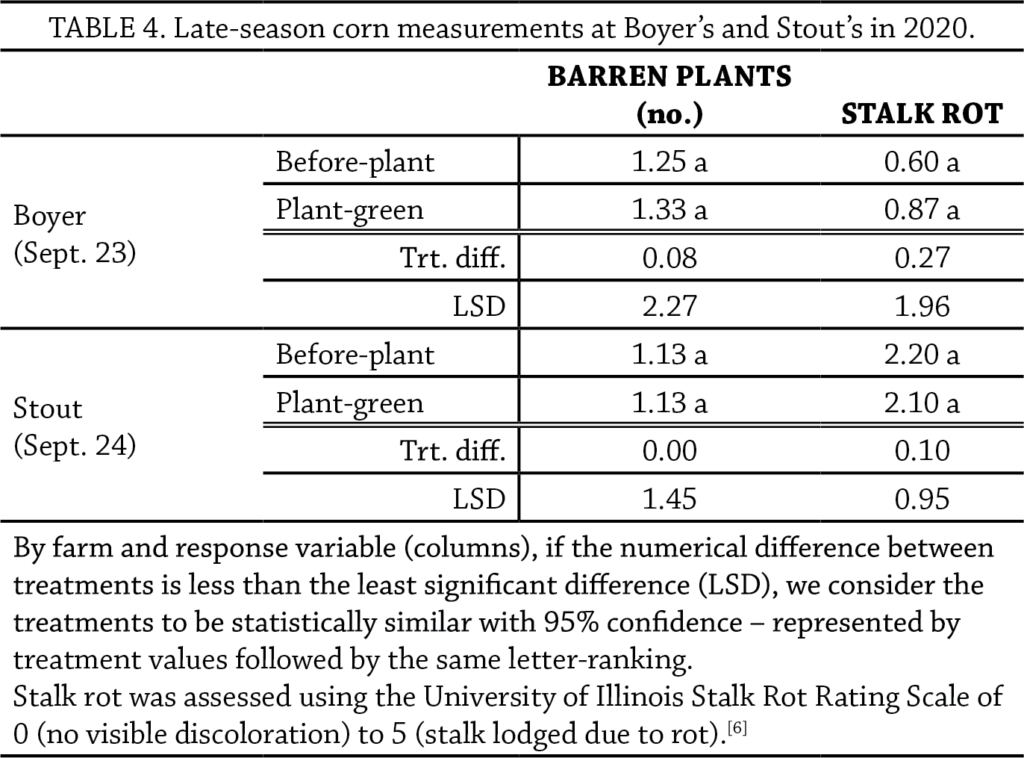 Contrary to conventional wisdom and to previous on-farm research results, the majority of the farms reported no negative effect on corn yield when planting green compared to terminating the cover crop before planting corn. Because each of the cooperators had some experience planting green in the past, they valued this experimental experience that was designed to shed more light on the practice. Boyer and Stout were glad to see that planting green at their farms did not result in yield drag; both are keen to allow a cover crop to grow as long as possible in the spring (up until corn planting) in order to maximize soil health benefits. Holl was happy to learn more about cover crop management ahead of field corn on his farm because he had some challenges previously when raising seed corn after a cover crop. “The commercial corn planted into a rye cover crop went very well and I’m willing to do it again,” Holl added. Each cooperator will be repeating the trial in 2021 and in partnership once again with Dr. Robertson’s lab group.

FIGURE A1. Sample experimental design used by the cooperators. The design includes replications of the two cover crop termination date treatments. This design allowed for statistical analysis of the results. 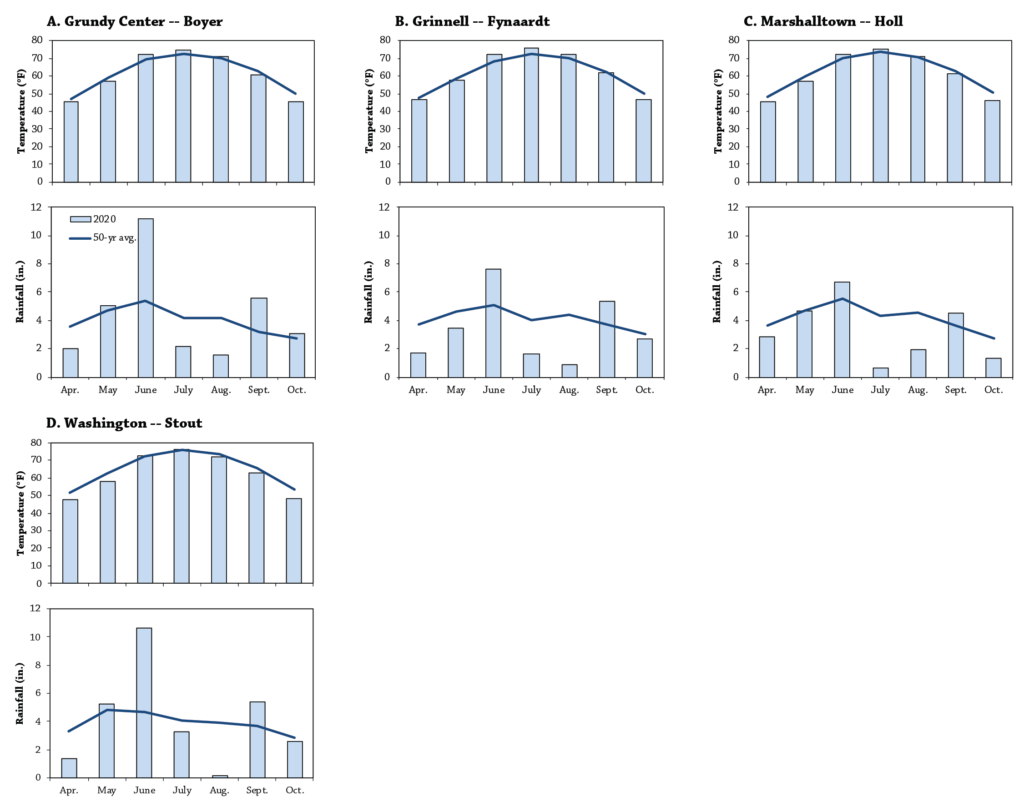 FIGURE A2. Mean monthly temperature and rainfall for 2020 and the long-term averages at the nearest weather stations to each farm.[7] A) Grundy Center (Boyer); B) Grinnell (Fynaardt); C) Marshalltown (Holl); D) Washington (Stout).