This research was funded by the Ceres Trust. 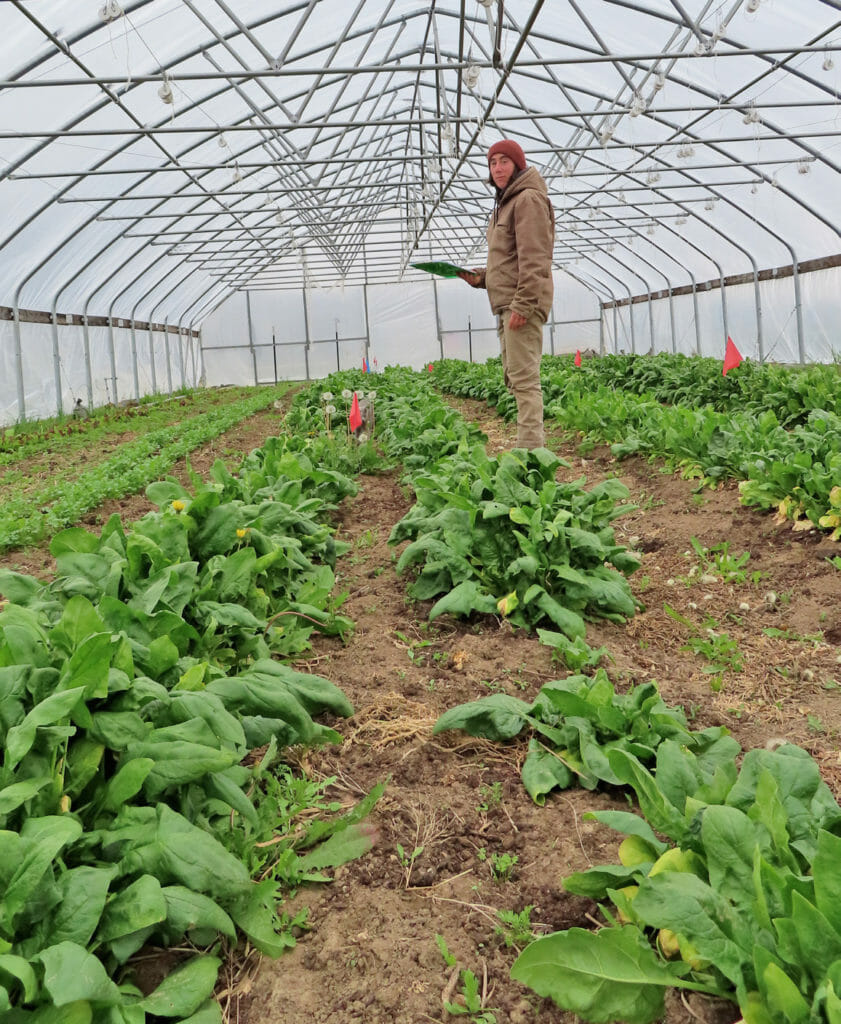 Emily Fagan of Humble Hands Farm stands among their plots of overwintered spinach inside a high tunnel. Photo taken April 28, 2022.

Left to its own defenses, a spinach plant seeded during a fall in Iowa would survive winter but its production would not pick up until late the subsequent spring. This might be fine if spinach could also then thrive in the inevitable and fast-approaching summer heat and longer daylight hours, but these cues trigger spinach to bolt (i.e. set seed), making it no longer palatable for human consumption. Fortunately, growers can use row covers and high tunnels as a buffer to protect plants from cold temperatures and wind. Doing so prolongs the growing period of spinach later into fall, and it gives overwintered spinach a head start on production the subsequent spring. This provides Iowa growers with a marketable crop during times when fresh produce is scarce and also produces a more delicious tasting crop. In colder temperatures spinach stores less water.[1] This concentrates its sugars, which protects the cells from freezing and makes for a tastier leaf – one that is highly desired by chefs.[2]

Iowa producers Emily Fagan and Hannah Breckbill of Humble Hands Farm, and Jon Yagla of The Millet Seed farm wished to sharpen their understanding of the optimum time to plant spinach for overwintering. Fagan commented, “It will be great to practice getting good spinach harvests as early in the year as possible, and continuing for as long as possible before bolting.” The objective of this trial is to determine how fall seeding dates affect the harvest window and yield after spinach has overwintered. 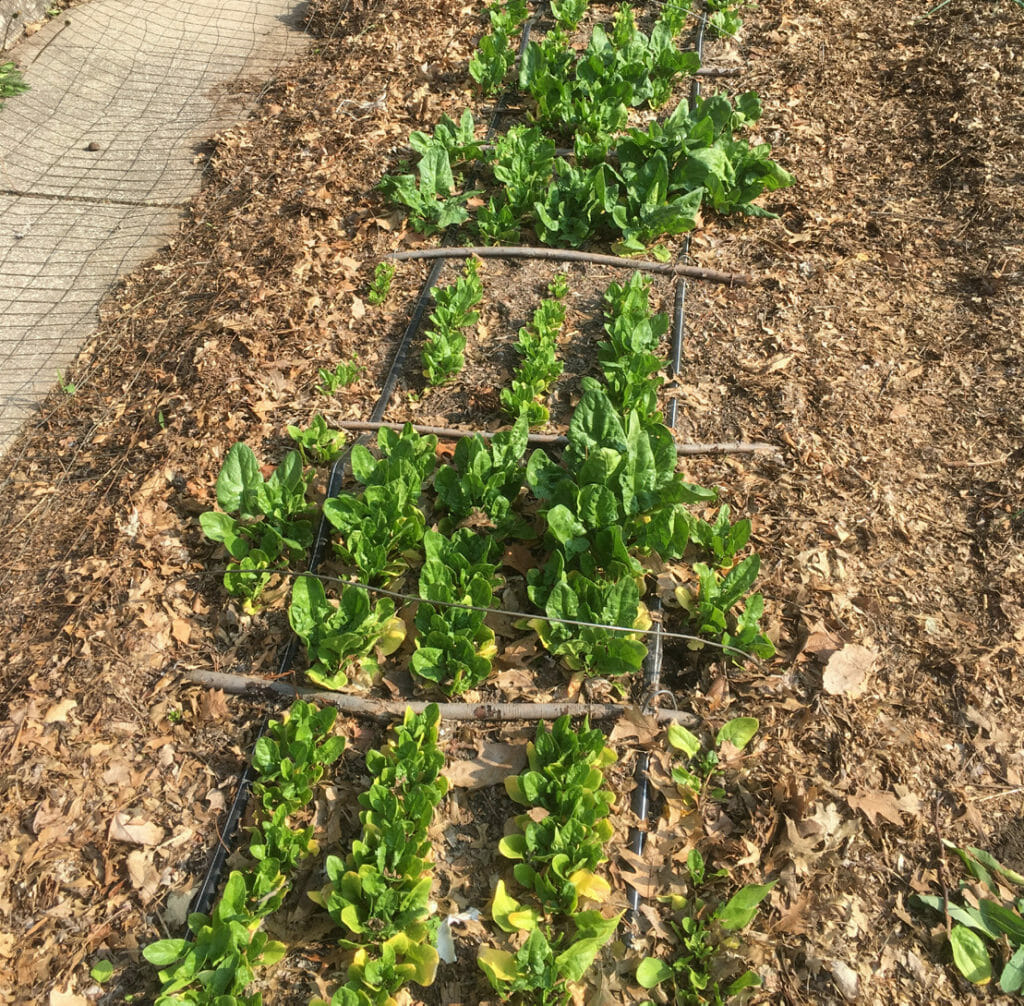 To measure spinach yield, cooperators weighed the marketable spinach from each plot on each harvest date. Because Breckbill and Fagan removed two edge rows from their four rows in each plot in early 2022, their 2022 yield data were adjusted (doubled) to maintain consistency for analysis. 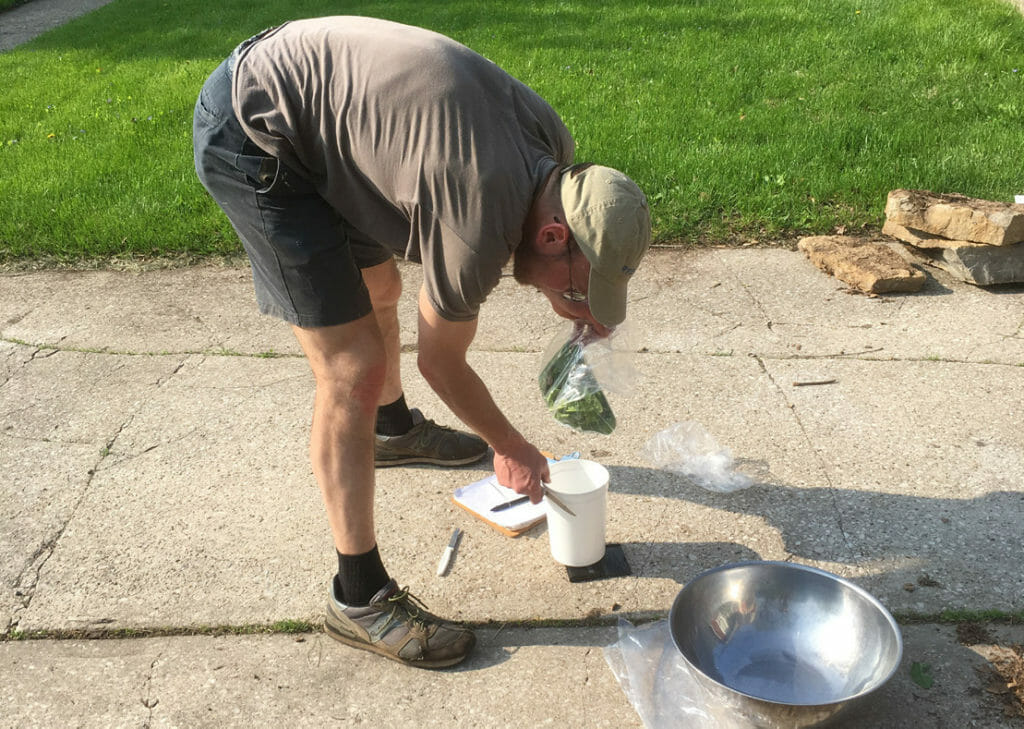 We determined the effect of spinach seeding date on yield by calculating the average cumulative yield of each treatment and using Tukey’s tests to compute least significant differences (LSDs) at the 95% confidence level. The difference between any two treatments’ average spinach yield is compared with the LSD. A difference greater than or equal to the LSD indicates the presence of a statistically significant treatment effect, meaning one treatment outperformed the other and the farmer can expect the same results to occur 95 out of 100 times under the same conditions. A difference smaller than the LSD indicates the difference is not statistically significant and the treatment had no effect.

At Breckbill and Fagan’s, spinach yields were statistically similar across all three treatments (Fig 1). Breckbill noted, “Our spinach was unprotected form December 15 through January 6, when the plastic on our high tunnel blew off. This prevented us from harvesting in December and January because the spinach was frozen and frost damaged.” She added, “There would have been harvestable spinach during that time if the plastic had remained in place.” Also worth mentioning is that Breckbill and Fagan’s potential yields are much greater than what is reflected in this report. For this trial they planted a lot more spinach than they ended up having a market for, and they only harvested spinach for which they had a market.

FIGURE 1. The average marketable yield of overwintered spinach from three seeding dates at Hannah Breckbill and Emily Fagan’s farm (left) and Jon Yagla’s farm (right) in 2022. Where the difference in average yield between any two seeding dates within a farm is greater than or equal to the corresponding least significant difference (LSD = 6.2 lb/plot at Breckbill & Fagan’s; LSD = 529 g/plot at Yagla’s), those yields are considered statistically different at the 95% confidence level. Where the difference in yield between any two seeding dates is less than the LSD, spinach yields are considered statistically similar.

Yagla was not able to harvest until April 3, 2022, and that was only in his early-seeded plots (Table 2). The first harvest in his later-seeded plots was further delayed until May 11. Yagla had anticipated much earlier harvests, but commented, “This is likely because I was growing the spinach under row cover rather than in a low or high tunnel. With only row cover as protection the temperatures don’t warm up as they would inside a plastic-covered tunnel.” Nevertheless, for Yagla, seeding spinach earlier resulted in the largest harvest window (48 days) compared to the 10-day harvest window of the later seeded treatments.

At Breckbill and Fagan’s, seeding earlier versus later in the fall influenced the harvest window but not yield. Seeding earlier allowed them to harvest in fall and spring; however, while harvest of their latest seeded spinach was limited to spring only, it lasted twice as late into spring as the earlier seeded treatments. At Yagla’s, harvest was limited to spring only for all treatments, but seeding earlier resulted in greater yield, an earlier spring harvest and a longer harvest window by nearly 40 days.

Breckbill, Fagan and Yagla walked away with an abundance of other questions and ideas to investigate further. Breckbill and Fagan commented, “There are lots of things to explore around how much harvest we can get in the fall without compromising spring production for various species.” Yagla, given the unanticipated variables of deer feeding and what he -hypothesizes may be some nutrient deficiencies in his plots, remarket, “It does seem that over all the earlier planting yields more. I will shoot for earlier seedings of spinach and other cold hardy greens when going for overwintering.” Jon also expressed interest in soil testing to figure out how to address nutrient deficiencies. 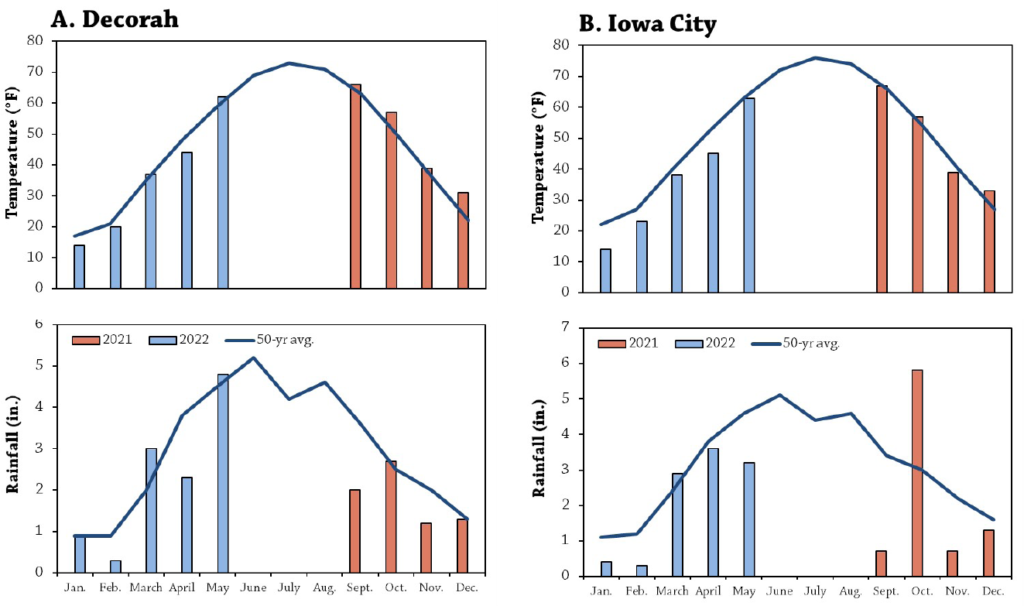 FIGURE A2. Mean monthly temperature and rainfall during the study period and the long-term averages at the nearest weather stations to each farm.[3] A) Decorah (Breckbill and Fagan; B) Iowa City (Yagla).