The use of row covers in the production of brassica crops like Napa cabbage provides effective protection from flea beetles, but the practice can worsen aphid outbreaks – if aphids manage to get under the row cover, their populations, and damage they cause, can surge.[1] This presents a bit of a conundrum because maintaining coverage with row cover is a major tactic deployed to prevent insect pests from accessing crops. Some evidence suggests that stressed plants are more vulnerable to damage from aphids than healthy plants. The objective of this trial was to study the effect of a product (Rejuvenate by Advancing Eco Agriculture, LLC[2]) that claims to activate soil biology and nutrient cycling to minimize plant stress and increase crop yield. In Breckbill and Fagan’s case, for Napa cabbage. 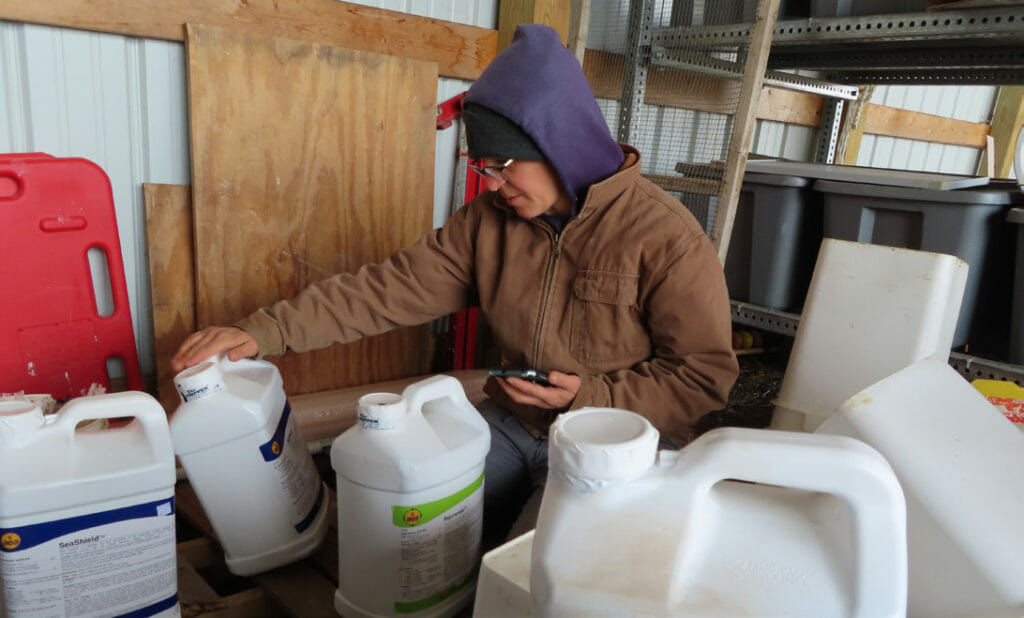 Breckbill and Fagan implements four replications of the two treatments (Figure A1) in plots measuring 2.5 ft by 8 ft. Field management is presented in Table 1. 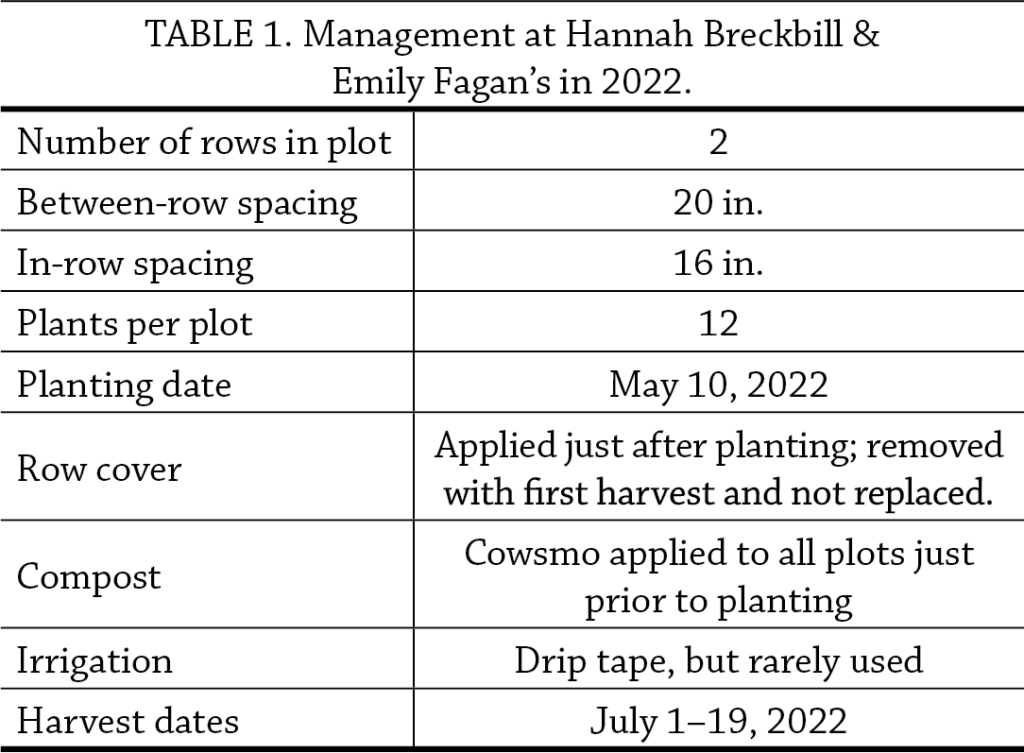 To evaluate the effect of the soil primer on Napa cabbage, we calculated the least significant difference (LSD) at the 95% confidence level using a t-test. If the difference between any two of the treatments was greater than the LSD, we would expect such a difference to occur 95 times out of 100 under the same conditions – we refer to this as a statistically significant effect. On the other hand, if the resulting difference between any two treatments was less than the LSD, we would consider the results to be statistically similar. We could make these statistical calculations because Breckbill and Fagan’s experimental design involved replication of the treatments (Figure A1).

There were no statistical differences in weight or count of marketable heads harvested (Figures 1 and 2) between the two treatments. Likewise, head weight was similar between the two treatments (Figure 3). In other words, control plots performed just as well as those receiving the soil primer. Breckbill noted that replications 1 and 2 yielded far less than replications 3 and 4: “We had a lot of thistle pressure in reps 1 and 2 that didn’t get addressed quickly, which impacted yield.” 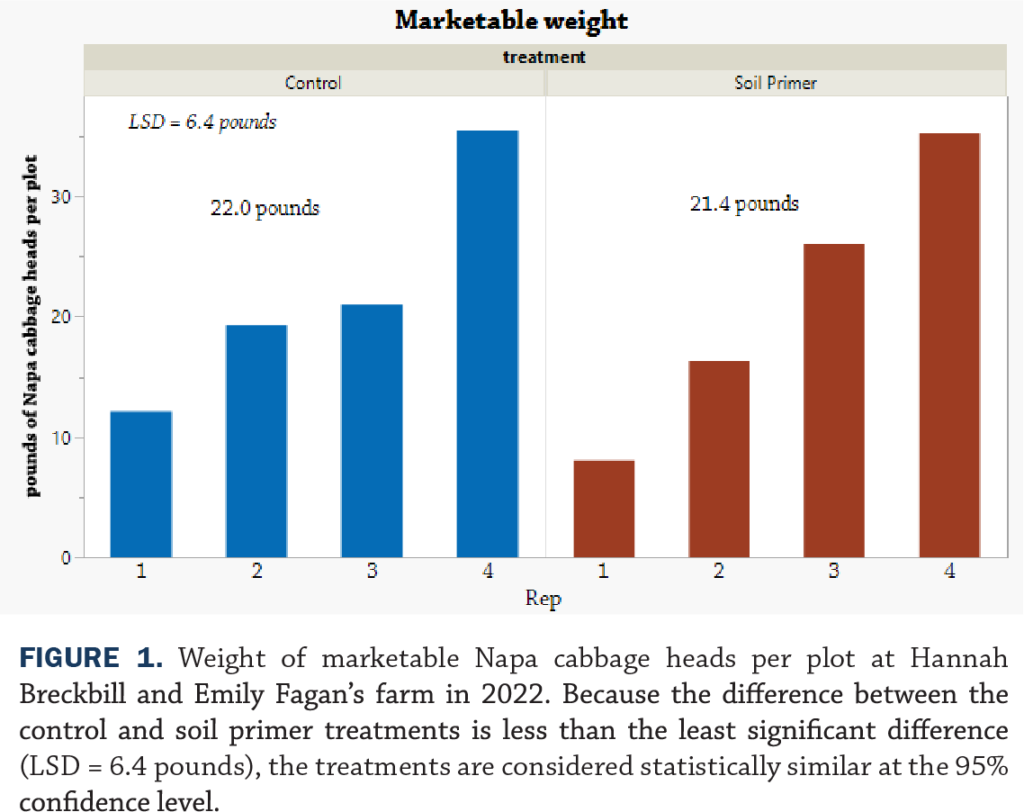 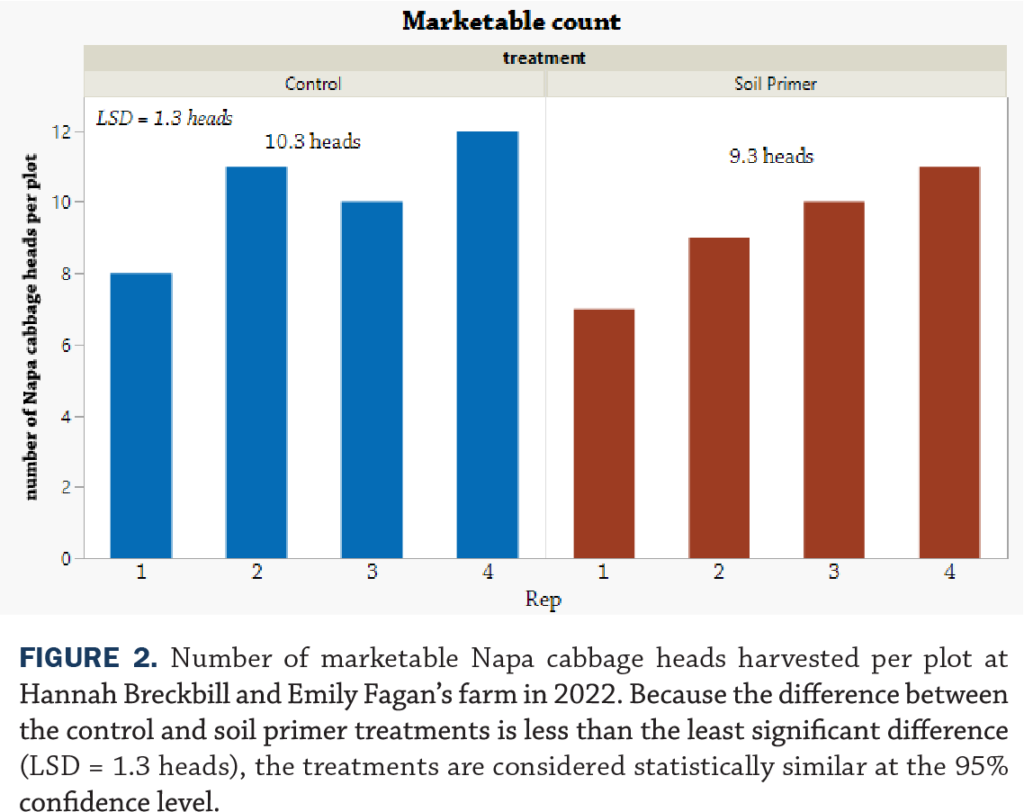 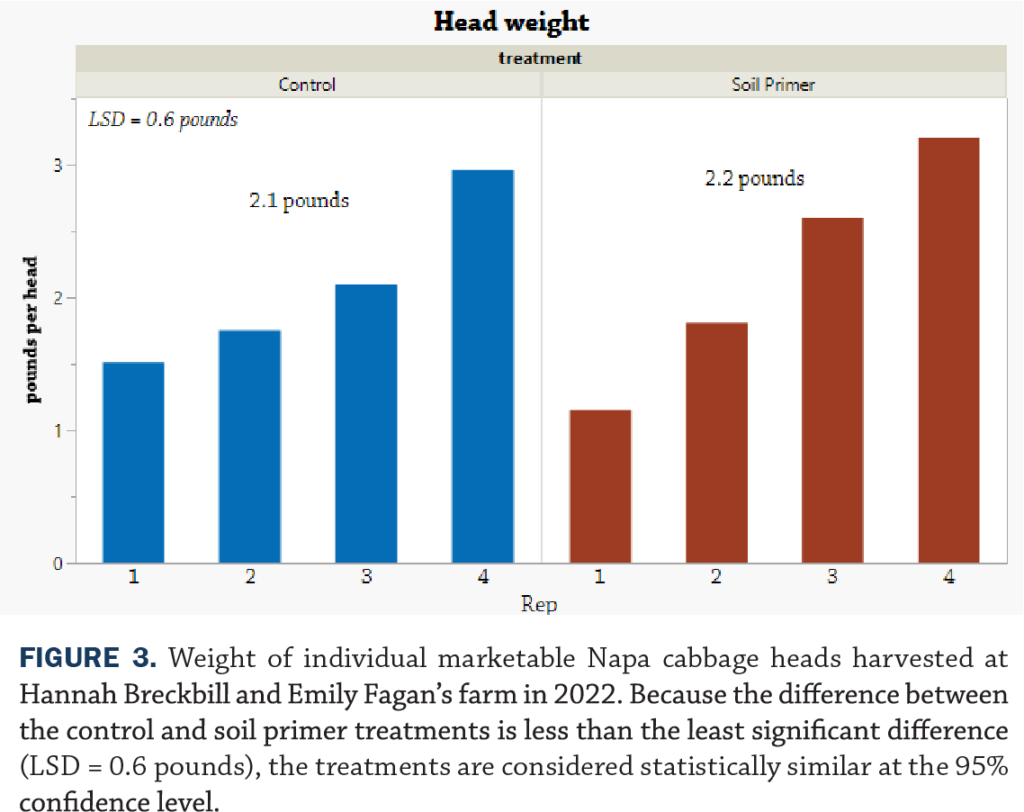 Going into this trial, Breckbill and Fagan were most interested to see if the soil primer (Rejuvenate) could help reduce aphid damage to Napa cabbage by producing healthier plants. As can happen when trying to study insect pests, aphid pressure turned out to be nonexistent at the farm this year so Breckbill and Fagan still wonder about the soil primer’s utility for Napa cabbage and on their farm in general. From a yield standpoint, the soil primer did not improve Napa cabbage productivity. “I want to keep trying this fertility regimen to see if it helps other crops in other circumstances,” Breckbill said. With crop pests on the mind, albeit weeds rather than insects, Breckbill considered the thistles they observed in replications 1 and 2 and added, “Also, I’m curious what the soil primer does to the thistle pressure.” 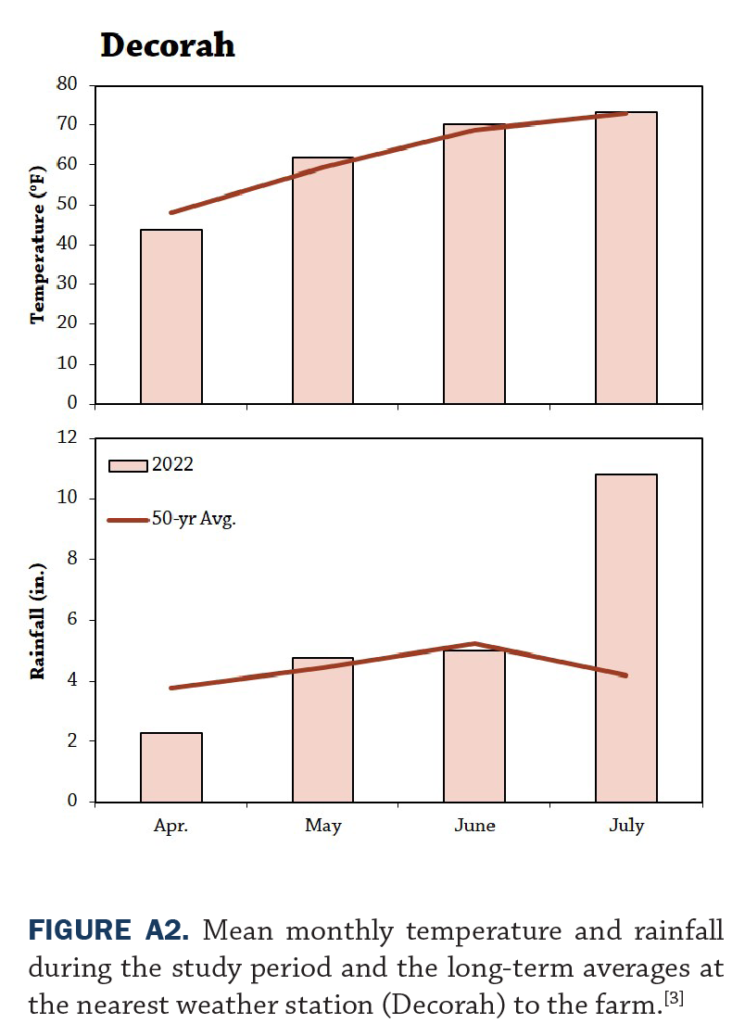