Growing red cabbage is considered to be similar to growing green cabbage; however, cooperators who tested red and green cabbage varieties in a 2020 summer cabbage variety trial found the red varieties yielded significantly less and were of lower quality.[1] Alice McGary, Hannah Breckbill and Emily Fagan, who participated in the 2020 variety trials, sought to improve their track record with growing red cabbage and conducted another variety trial to focus exclusively on red cabbage varieties. Fagan and Breckbill considered the trial an opportunity to invest more energy in their red cabbages and to determine whether the root of their red cabbage dilemma is due to their growing patterns or just the varieties themselves. Fagan commented, “In asking around for red cabbage varieties, it seems like folks generally have a hard time and haven’t found success with many. So perhaps this trial will shed some light on the situation!” McGary hoped to improve her red cabbage yields as a result of the trial as well as to instill in her summer interns how to utilize scientific thought and conduct on-farm research. McGary said, “We will grow more fall red cabbages this year than ever before, investing space and time in untried varieties and timing. Hopefully it will be successful!” 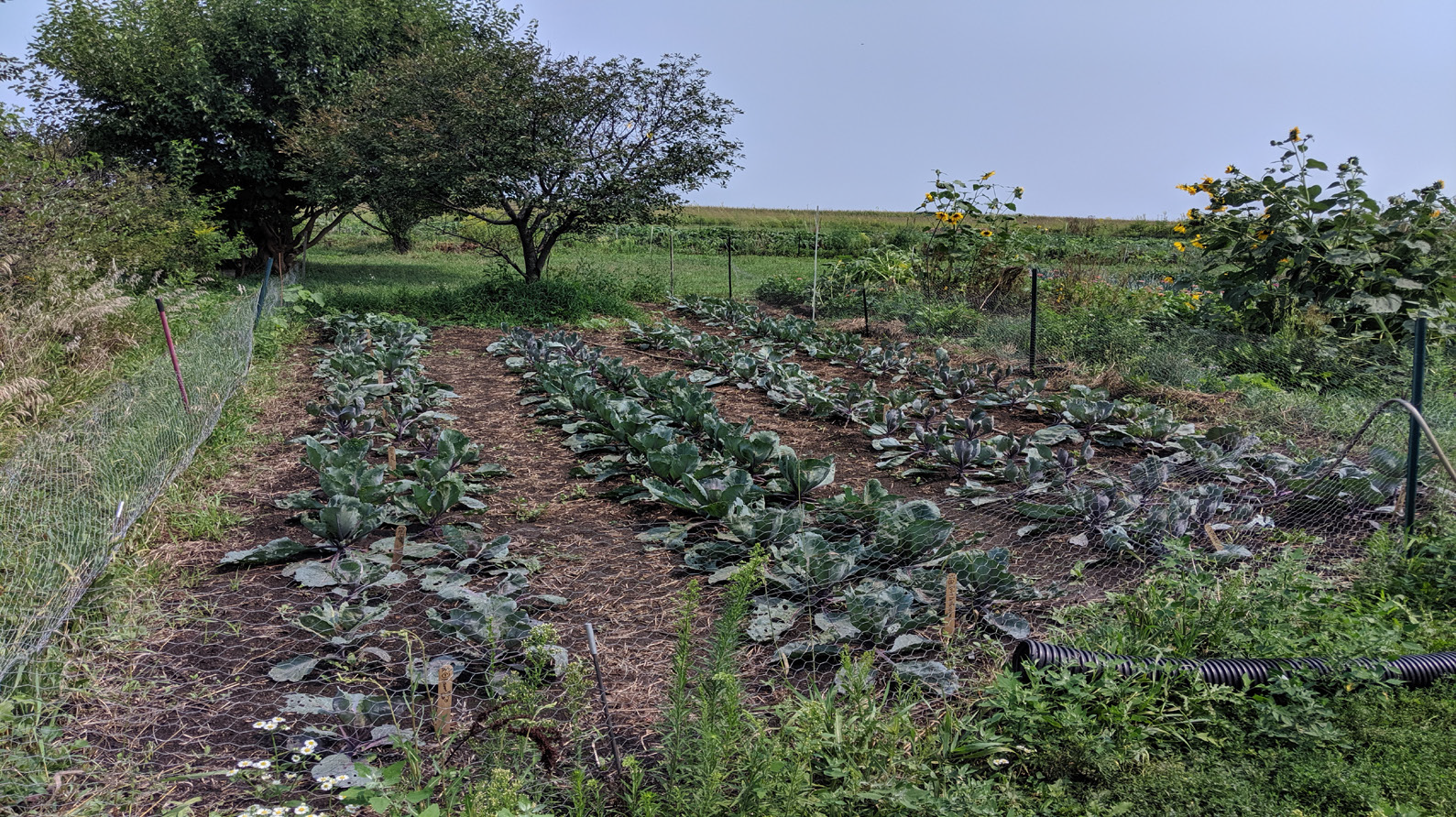 Cooperators designed a randomized, replicated trial comparing four treatments (red cabbage varieties): Integro, Ruby Perfection, Mammoth Red Rock, and Buscaro. Both cooperators seeded cabbage of each variety in greenhouses in spring 2021 and transplanted seedlings approximately one month after seeding (Table 1). They transplanted seedlings according to the experiment design in Figure A1, which includes four randomized replications of each variety for a total of 16 plots (4 treatments × 4 reps = 16 plots).

Cooperators harvested cabbage throughout October and November and reported the total number and weight of marketable cabbages harvested from each plot (Table 1). Cooperators also scored plots for quality issues, specifically head splitting, black rot and cabbage worms. Presence of these issues was scored per plot as “none,” “some,” or “much.” To create average scoring for quality, numerical values were later substituted as such: “none” = 0, “some” = 1 and “much” = 2. Therefore, a score of 0 indicates no presence of the indicated quality issue and scores closer to zero indicated better cabbage quality. Quality scores were not statistically analyzed. 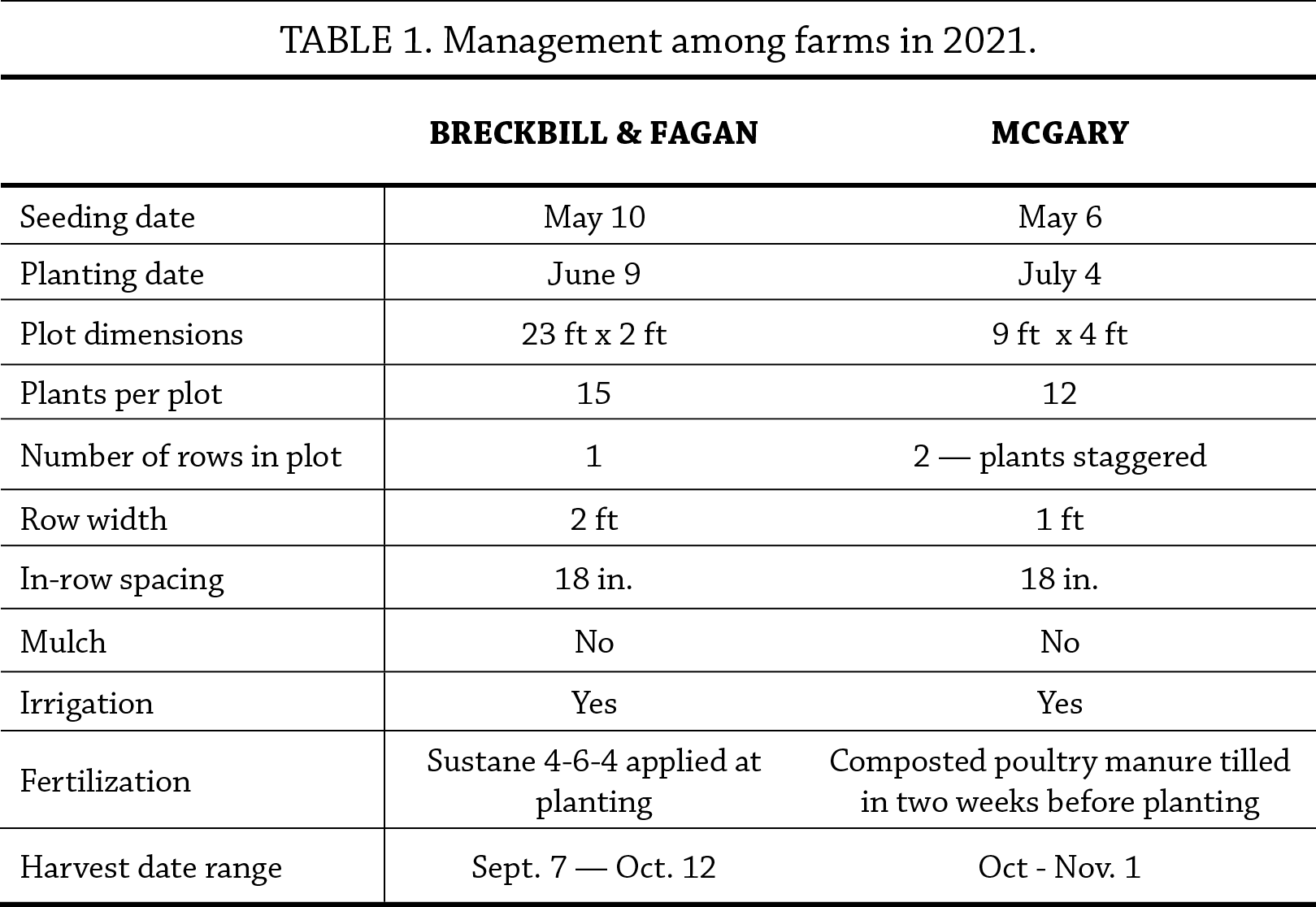 To determine the effect of red cabbage variety on yield, we calculated the average yield in each treatment then used Tukey’s tests to compute the least significant difference (LSD) at the 95% confidence level. If the difference in harvest rate or yield for any two varieties is greater than or equal to the LSD, we consider the treatments to have a statistically significant effect on harvest rate or yield and the cooperator could expect the same results to occur 95 out of 100 times under the same conditions. Conversely, if the difference in yield among varieties is less than the LSD, we consider those varieties to be statistically similar. We could make these statistical calculations because the farmers’ experimental designs involved replication and randomization of their treatments (Figure A1).

At Breckbill and Fagan’s, Buscaro generated a significantly greater number of cabbages per plot compared to Integro, which produced the fewest cabbages (Table 2). Buscaro also produced a greater total weight of cabbages than both Integro and Mammoth Red Rock varieties. Ruby Perfection consistently performed equally compared to other varieties – neither better nor worse than another. Likewise, Mammoth Red Rock generated a similar number of marketable cabbages as other treatments; however, in terms of marketable weight, Mammoth Red Rock performed similarly to Integro – both generated significantly less weight than Buscaro. 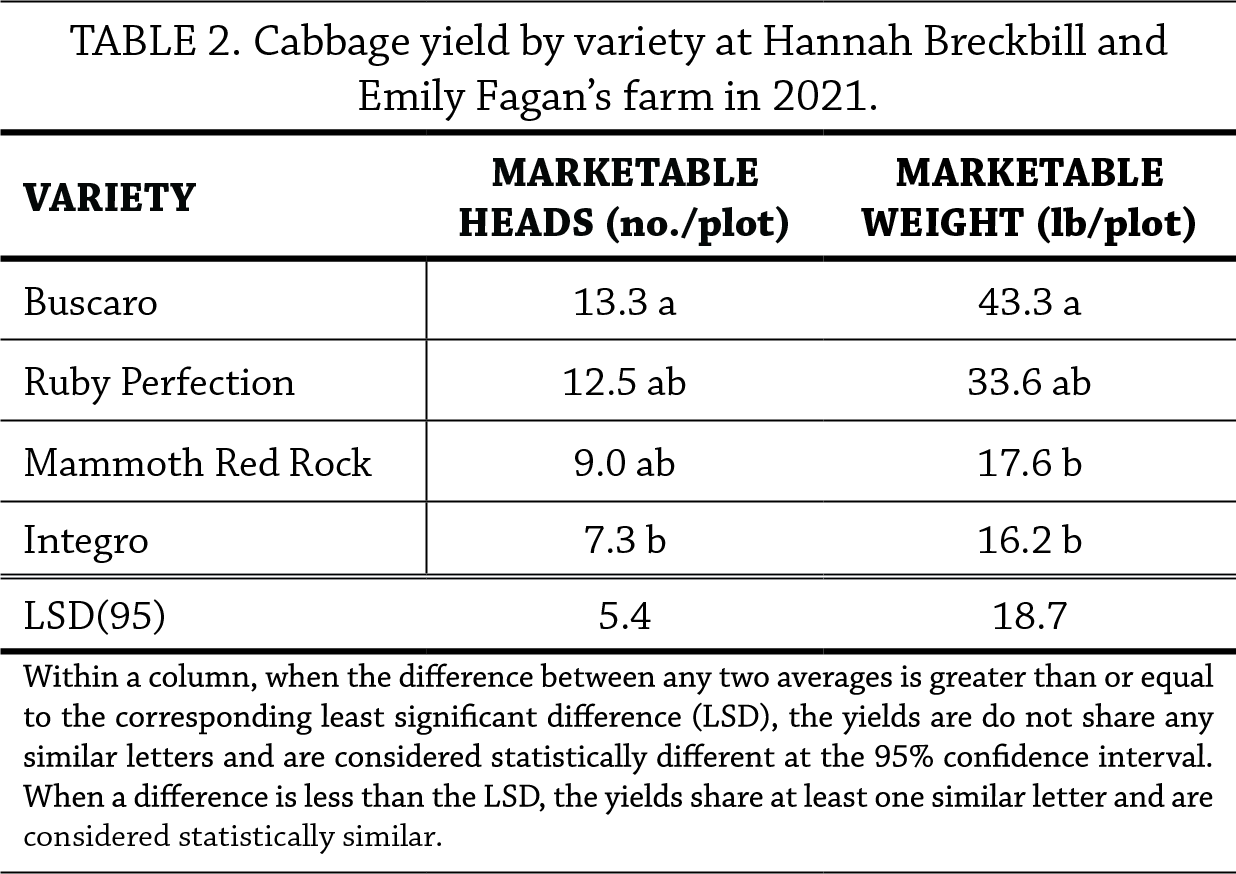 At McGary’s, both the number and weight of cabbages produced by each variety were statistically similar (Table 3). She mentioned that all cabbages were smaller than ideal but seemed to have similarly sized heads at similar times. 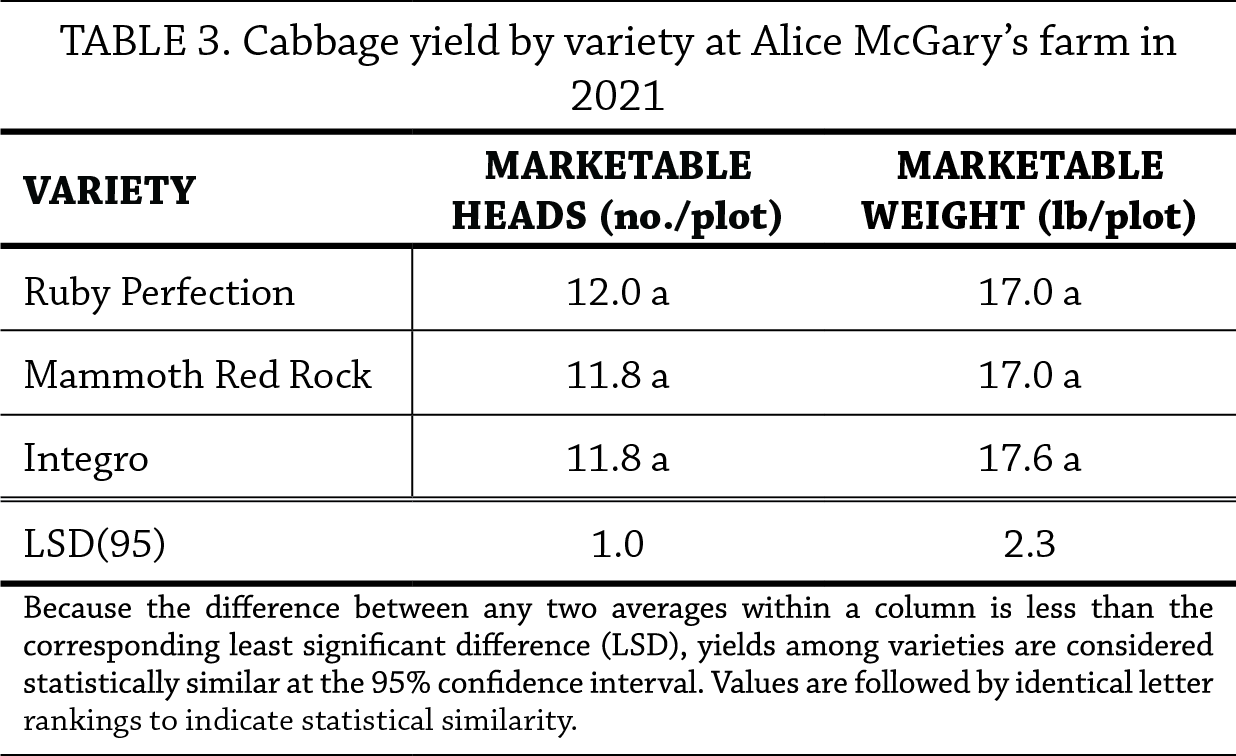 McGary observed “a fair amount of cabbage worms” at the time of her final harvest on Nov. 1; however, McGary said the culling of any unmarketable cabbages was because of the small head size and not due to splitting, black rot or cabbage worms. She also reported the leaves of Integro cabbages tended to be more upright and small, while the leaves of Mammoth cabbages were widest and filled out the canopy best.

At Breckbill and Fagan’s farm, Buscaro was the top-performing variety. It produced a statistically greater weight of cabbages compared to Integro and Mammoth Red Rock and experienced the least amount of black rot compared to all other varieties. Ruby Perfection, Integro and Mammoth Red Rock produced statistically similar yields, resembling McGary’s results. McGary, who compared the same varieties as Breckbill and Fagan, except Buscaro, observed no differences in yields. Although Buscaro performed well compared to the other varieties at Breckbill and Fagan’s, Fagan reflected on their results saying, “I don’t love any of the varieties we grew. I am still underwhelmed by how red cabbage grow on our farm compared to green cabbage. But I learned a lot and feel closer to red cabbage success.”

FIGURE A1. Example of experimental design used by Breckbill, Fagan and McGary, which included randomized replications of the cabbage varieties. This design allowed for statistical analysis of the results. 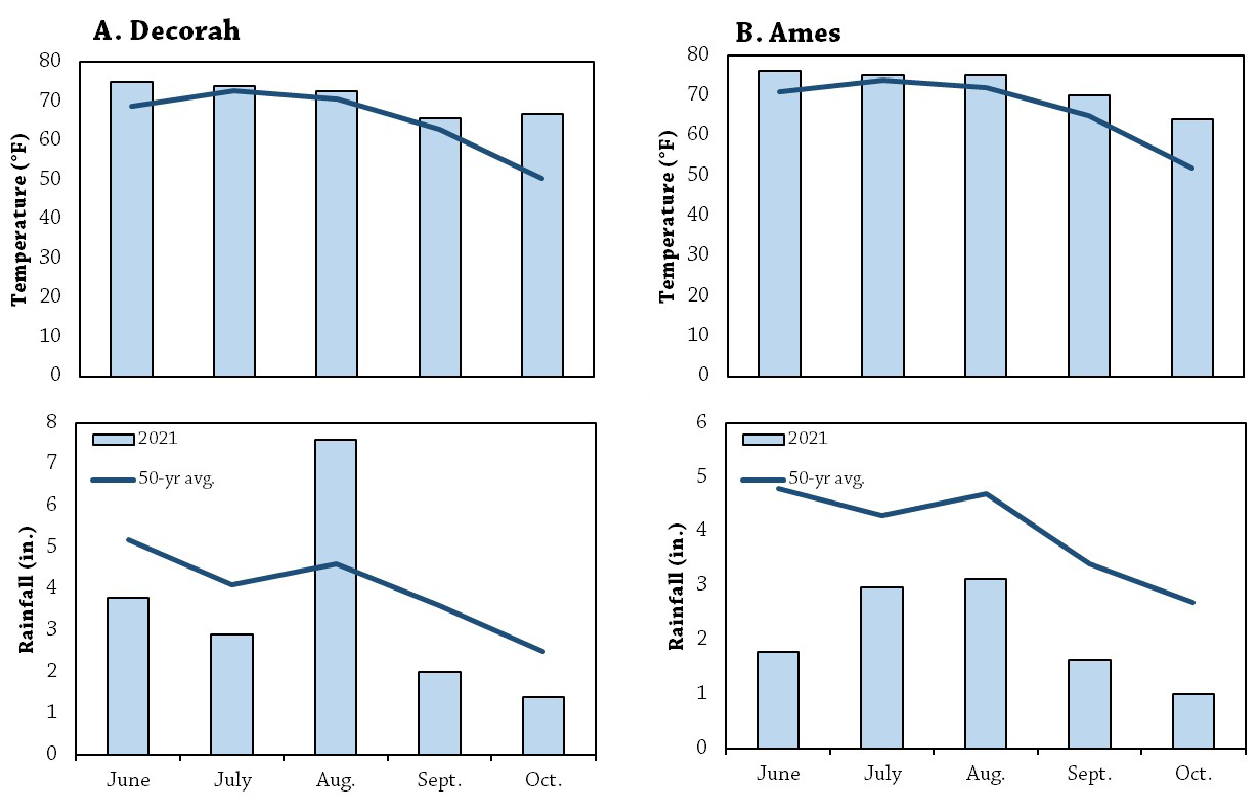 Beneficial Insects - Bringing Back the Edges