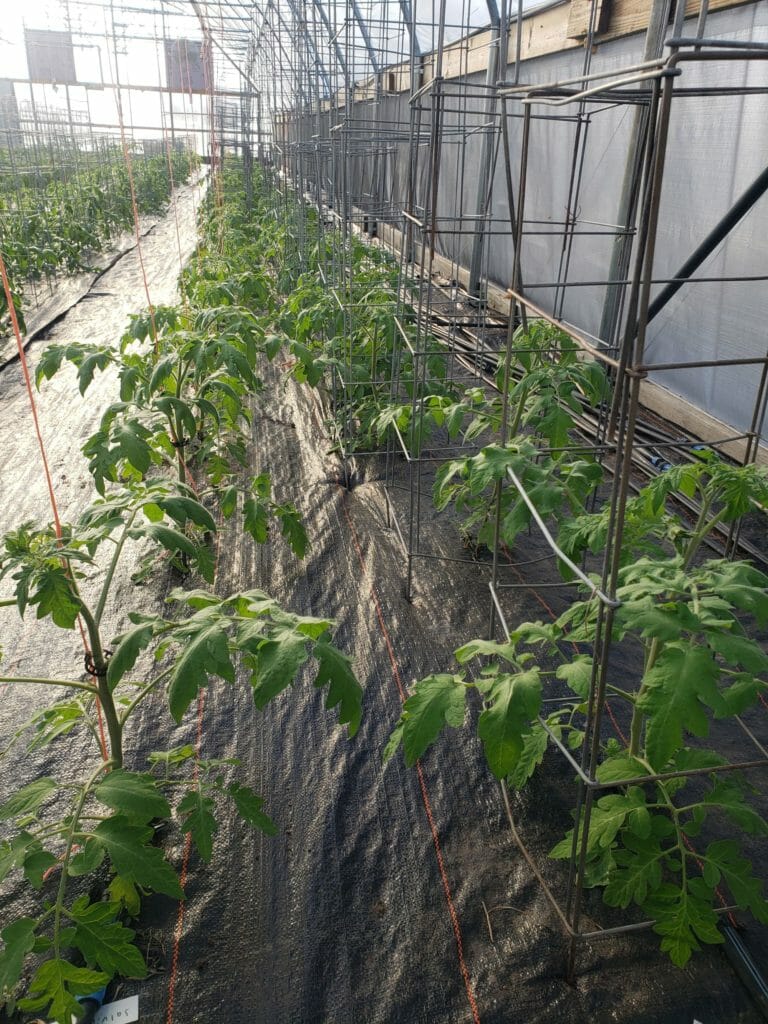 A row of pruned and trellised plants at left and a row of caged and unpruned plants at right in Lee Matteson’s high tunnel. Photo taken March 27, 2022 (about one month after transplanting).

He implemented four replications of the two treatments (Figure A1) in plots measuring 1.5 ft by 20 ft. Plot management is presented in Table 1. 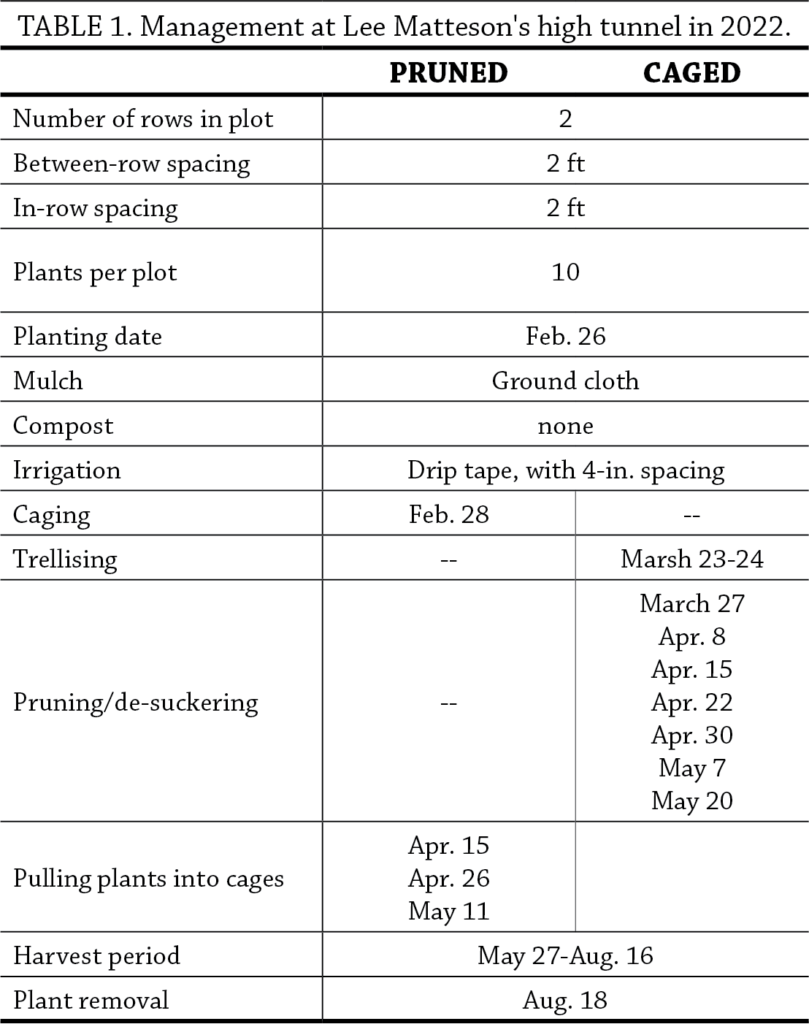 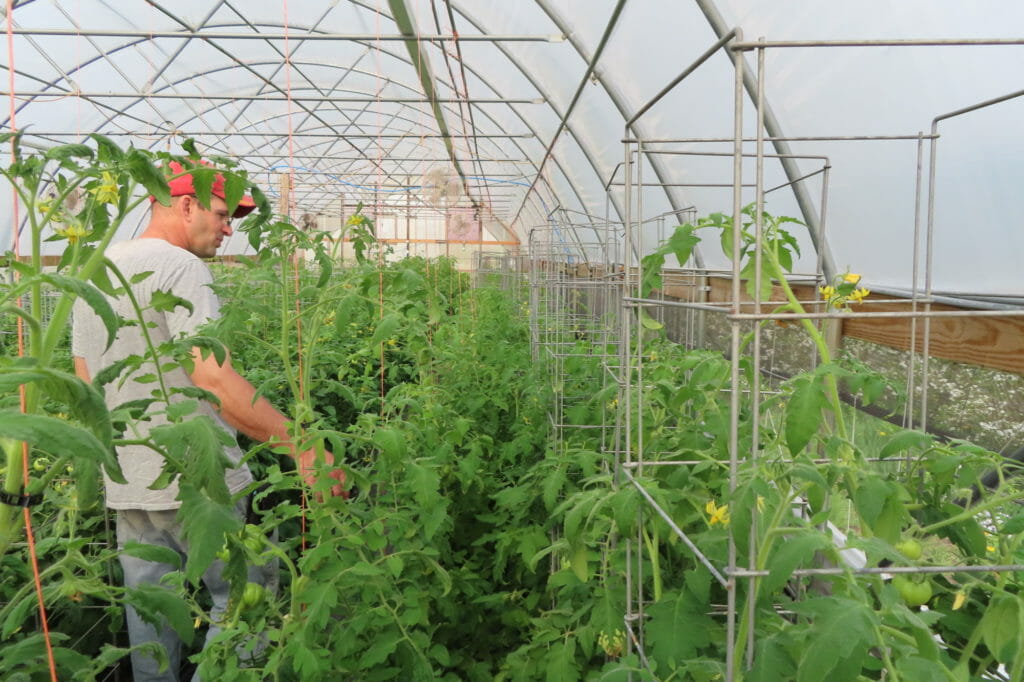 Lee Matteson among the pruned and trellised (left) and caged and unpruned (right) tomato plants in his high tunnel on May 10, 2022.

Matteson began harvesting tomatoes on May 27; the final harvest occurred on Aug. 16. On each harvest date, he documented the weight and number of marketable fruit harvested from each plot. Total weight and total number of marketable fruit harvested from each plot during the harvest period (May 27–Aug. 16) were used in the analysis. From these values we also calculated the average weight of an individual marketable fruit. Matteson also recorded the time he spent managing the plots through the year; namely, time spent pruning plants or pulling plants into cages.

To evaluate the effect of pruning or caging on heirloom tomatoes, we calculated the least significant difference (LSD) at the 95% confidence level using a t-test. If the difference between any two of the treatments was greater than the LSD, we would expect such a difference to occur 95 times out of 100 under the same conditions – we refer to this as a statistically significant effect. On the other hand, if the resulting difference between any two treatments was less than the LSD, we would consider the results to be statistically similar. We could make these statistical calculations because Matteson’s experimental design involved replication of the treatments (Figure A1).

Both the weight and count of marketable fruit were improved by caging the heirloom tomatoes compared with pruning them (Table 1). Average fruit weight between the treatments was similar, so the greater weight harvested from the caged treatment was due to more fruit harvested from that treatment. Matteson’s results differ from those of PFI cooperators Maja & Carmen Black and Natasha Hegmann who conducted similar trials in high tunnels in 2020.[1] Both the Blacks and Hegmann saw no difference in tomato yield between plants that were pruned to a single leader and plants left unpruned. In those previous trials, the cooperators used ‘Big Beef’ tomatoes, which is a hybrid indeterminate variety. In the present trial, Matteson used ‘Beauty King’ tomatoes, which is an indeterminate heirloom, and that may account for the different results than Black’s and Hegmann’s.

Matteson recorded the amount of time spent on pruning, trellising and caging plants through the year (Figure 1). He spent twice as much time on the pruned tomatoes as he did the caged tomatoes (63 v. 30 min/plot). Much of the extra time spent on the pruned tomatoes came from pruning periodically through the year (Table 1) and the time spent removing plants and trellises at the end of the year. Matteson did not record the amount of time spent harvesting fruit from the two treatments but remarked that it was likely equal. 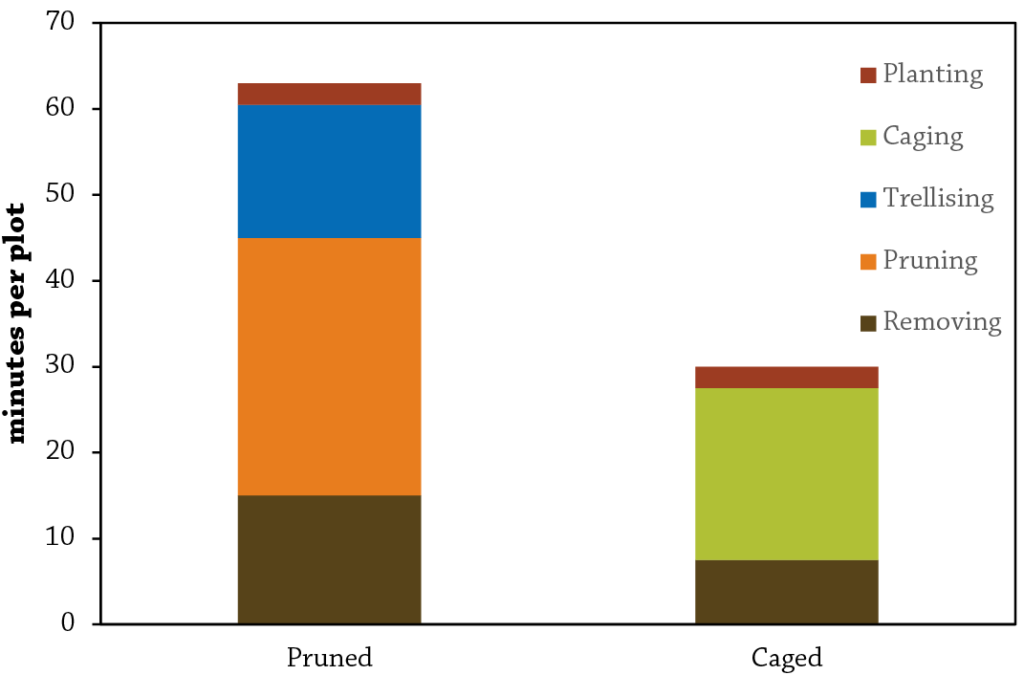 Caging heirloom tomatoes produced higher yields and required less labor than pruning and trellising in Matteson’s high tunnel. Matteson found value in these results because they confirmed what he suspected would happen. He added, “I am always looking to improve yield and efficiency. It took less work with the cages to produce heirloom tomatoes. So, if I can produce more with less inputs that’s always a win-win.”

Figure A1. Example of experimental design used by Matteson, which included randomized replications of the treatments. This design allowed for statistical analysis of the results. 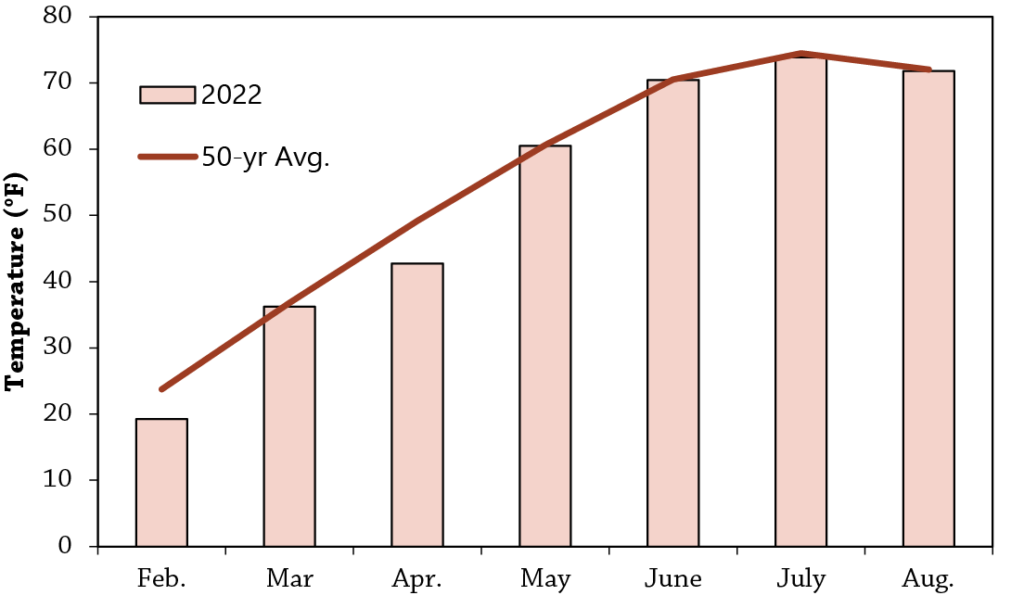 Figure A2: Mean monthly outdoor temperature during the study period and the long-term average at Ames, the nearest weather station to Matteson’s farm.[2]

Building Community and High Tunnels After the Derecho