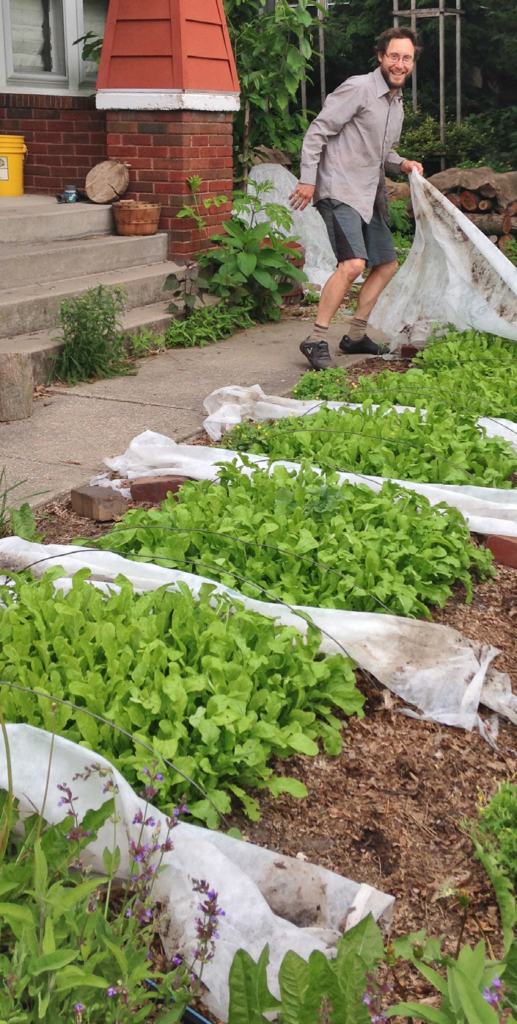 Arugula is a cool-season, leafy vegetable with a fast growing time of 40 to 50 days. It adds interest to salads and sandwiches with its peppery, bitter taste and is highly popular at farmers markets and in Community Supported Agriculture (CSA). While arugula is a generally low-maintenance crop, flea beetles form a sizeable threat to its quality and marketability.[1] Flea beetles are tiny but destructive insects that chew holes in leaves of arugula and other leafy greens, rendering them unmarketable. They overwinter in soil as adult beetles and emerge early in the spring to lay eggs around plant bases.[2] Eggs mature into adults in three to four weeks, leaving time for as many as three generations per year.

Emily Fagan, Hannah Breckbill and Jon Yagla grow arugula organically and battle flea beetles each year. The surest defense against flea beetles for arugula is row cover – even when compared with conventional pesticides.[3] However, arugula is harvested more than once in the course of a season, and the row cover must be removed to access the plants for harvest. Neither Fagan, Breckbill nor Yagla are certain if replacing row covers after the first harvest is worth the time and labor, so they designed on-farm research trials to assess arugula quality in plots in which row covers were permanently removed at first harvest and in plots in which row covers were replaced after the first harvest.

Fagan commented, “We feel uncertainty about how to best use row covers in arugula, which costs more energy than we would like to expend! After this trial, we hope we’ll be able to choose a reliable method so we don’t have to think it over every time we harvest arugula. It’s much nicer to just get in the rhythm of doing things a certain way than to debate it every time.” Fagan and Breckbill hypothesized the most labor-intensive option, re-covering and burying the row cover edges, would result in the least flea beetle injury while Yagla hypothesized there would be no difference in flea beetle injury between treatments. Yagla’s objective was to “determine if re-applying row covers after first harvest is worth the time and effort.” He commented, “I hope to generate data that will help other vegetable farmers make decisions about how they grow arugula.” 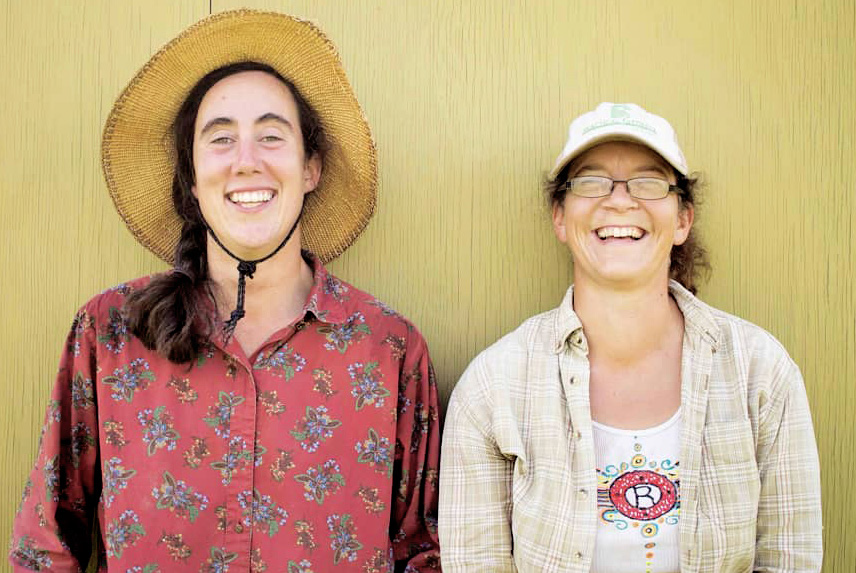 Management at each farm is detailed in Table 1. Cooperators direct-seeded arugula at the end of April and covered all plots immediately with row cover. At the time of first harvest in late May, they removed the row covers and harvested plots. After first harvest, the cooperators established treatments by leaving plants permanently uncovered in some plots (‘remove’) and re-covering plants in other plots then securing the row cover with sandbags or other weighted material (‘sandbag’). Breckbill and Fagan included an additional treatment in which they replaced row covers in some plots but secured the edges by burying them with soil (‘bury’). Cooperators replicated each treatment four times for a total of 8 plots (2 treatments × 4 reps) at Yagla’s and 12 plots (3 treatments × 4 reps) at Breckbill and Fagan’s (Figure A1). They assigned treatments randomly to single plots in each replication. 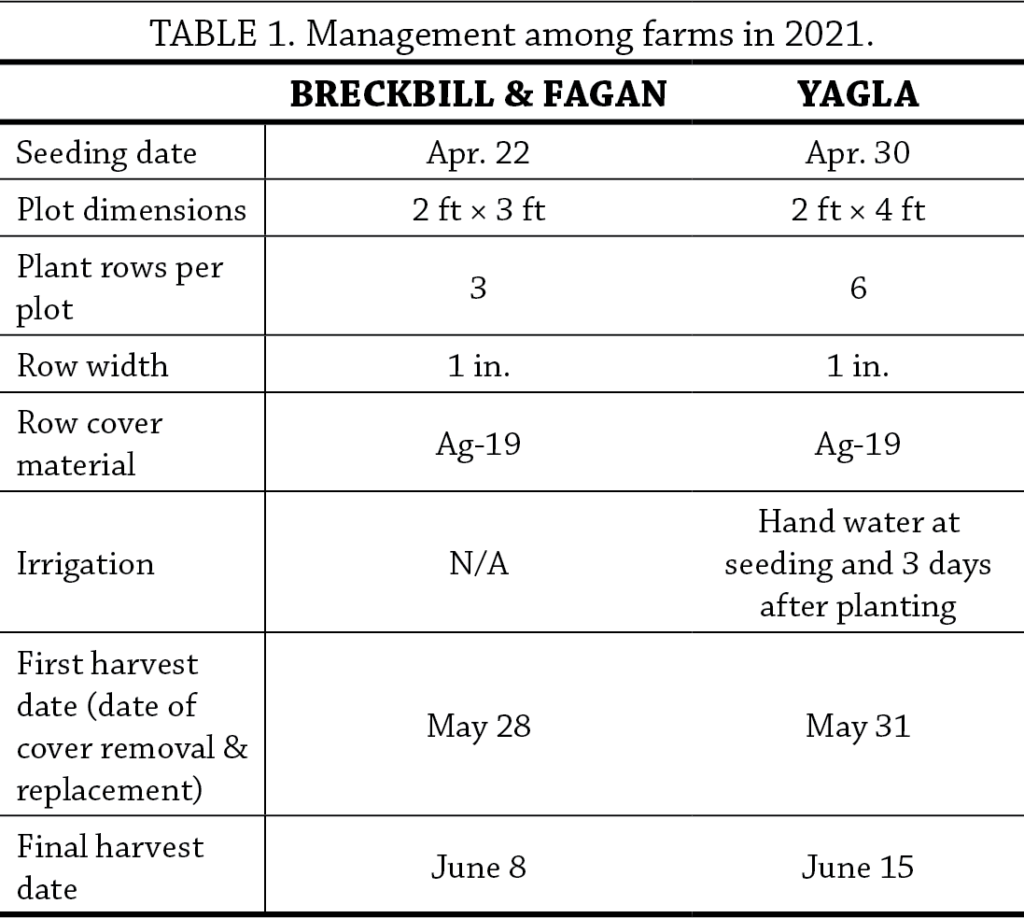 To measure arugula quality, cooperators counted the number of holes in 20 leaves collected from each plot during the final harvest (Table 1). 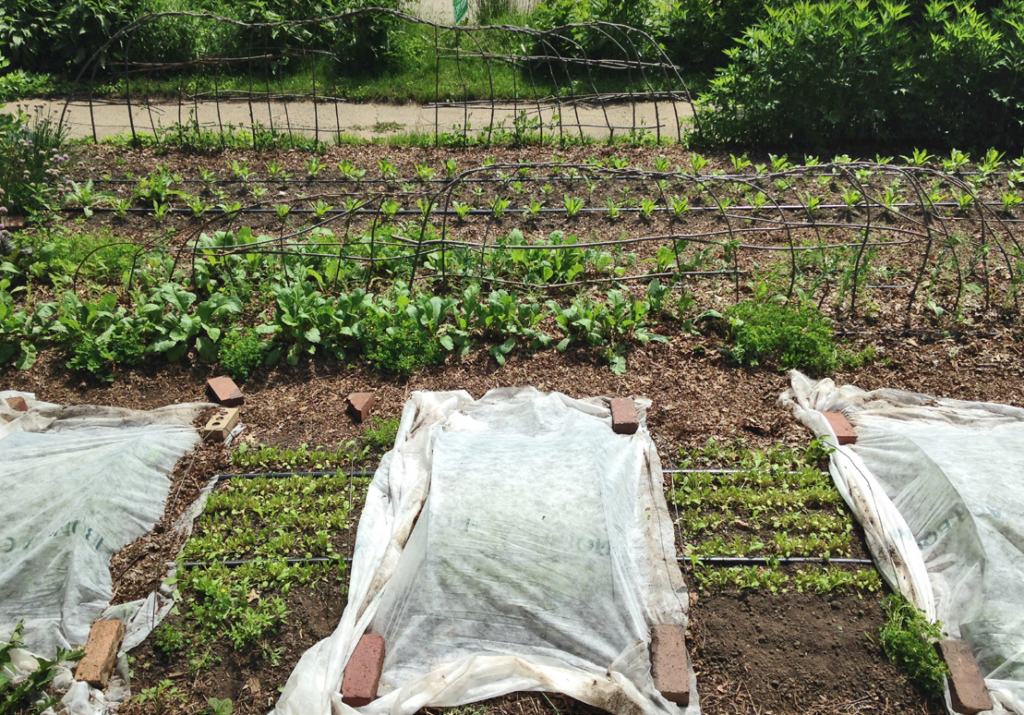 To determine the effect of row cover replacement on arugula quality, we calculated the average number of holes per leaf for each treatment then used Tukey’s test to compute the least significant difference (LSD) at the 95% confidence level. If the difference in quality for any two treatments was greater than or equal to the LSD, the treatments were considered to have a statistically significant effect on arugula quality and the cooperator could expect the same results to occur 95 out of 100 times under the same conditions. Conversely, differences less than the LSD indicated the difference in arugula quality was not statistically significant and the treatment had no effect. 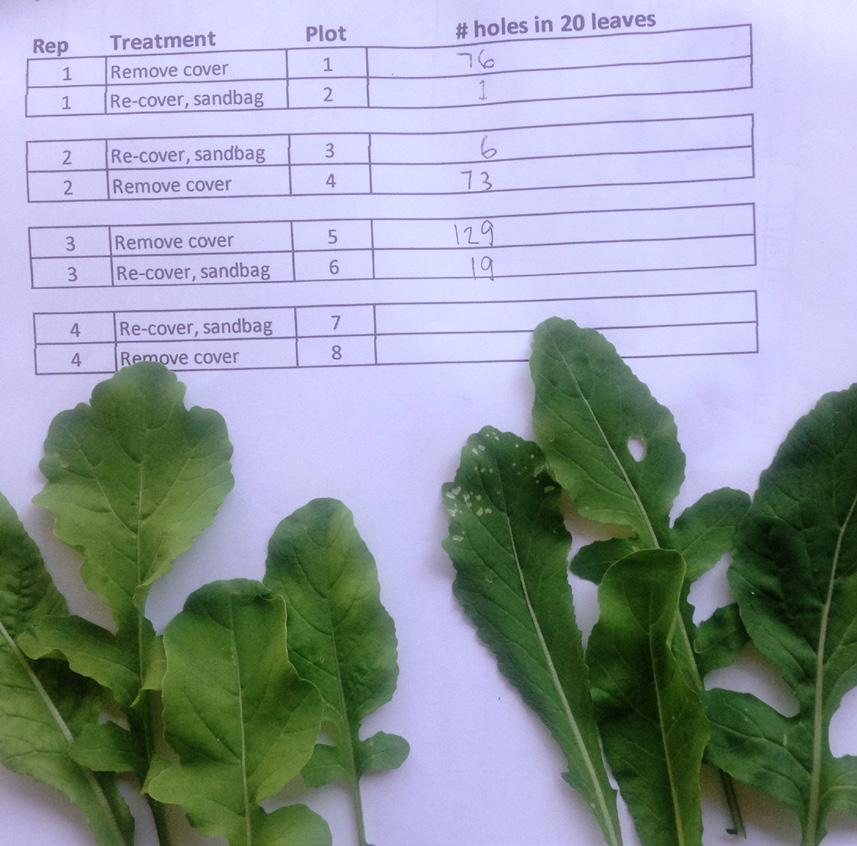 FIGURE 1. Average number of holes per arugula leaf (arugula quality) in each treatment at Breckbill and Fagan’s farm (A) and Yagla’s farm (B) in 2021. Because the differences between any two averages at a farm is greater than the least significant difference (LSD = 23.5 holes per leaf at Breckbill and Fagan’s; LSD = 1.5 holes per leaf at Yagla’s), arugula quality is considered statistically different at the 95% confidence level. 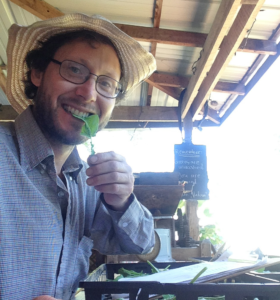 A portrait of Jon Yagla taking a moment to appreciate the fruits leaves of his labor. Photo taken June 15, 2021.

At both farms, re-covering the arugula after first harvest resulted in significantly fewer holes from flea beetle feeding. Yagla commented, “Even though re-covering arugula between first and second harvest resulted in statistically less flea beetle damage, the damage was so minimal in both treatments that it may not be worth re-covering plants for me. If the flea beetle pressure seems heavy at harvest time in my gardens, I will be more likely to re-cover the arugula. But if pressure seems low, then I won’t bother.” Breckbill and Fagan experienced much heavier flea beetle pressure than Yagla and were happy to confirm their hypothesis that re-burying row cover edges results in better arugula quality. Fagan commented, “Now I have a concrete reason to spend extra energy re-burying row cover edges! I might still get lazy about it, but I’ll at least try harder to follow through on re-covering [arugula] after harvest.” The cooperators were satisfied with the trial’s ability to answer their questions and are likely to implement changes to their farm based on their findings.

FIGURE A1. Sample experimental designs at Emily Fagan and Hannah Breckbill’s (top) and Jon Yagla’s (bottom). Treatments were randomly assigned and replicated four times, which allows for statistical analysis of the data. 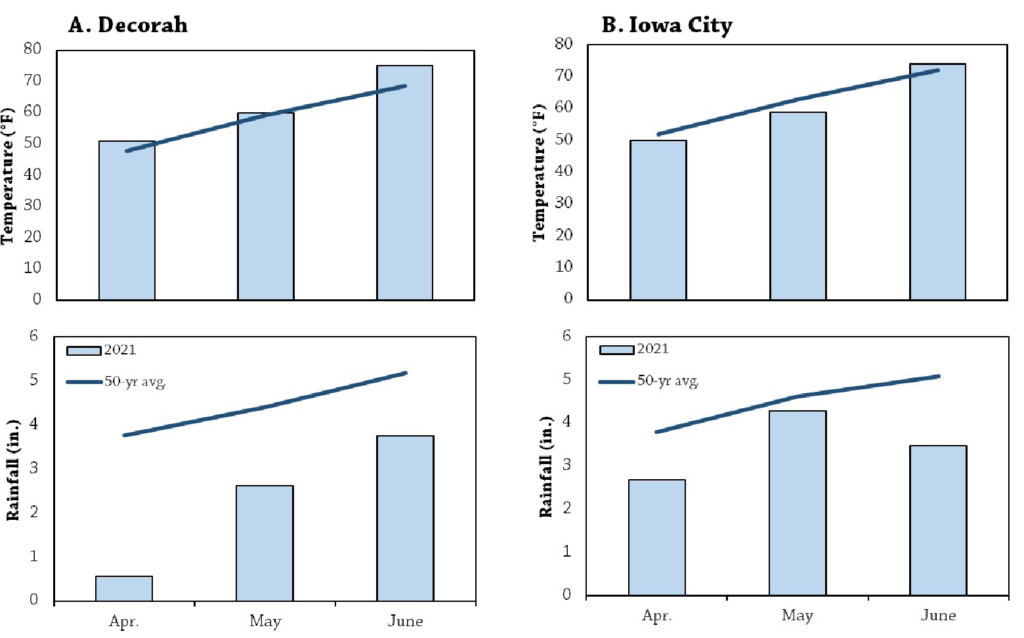 FIGURE A2. Mean monthly temperature and rainfall during the study period and the long-term averages at the nearest weather station to each farm.[4] A) Decorah (Breckbill and Fagan, about 10 miles away); B) Iowa City (Yagla, about 1 mile away).