The conservation accomplishments of Iowa’s farmers and SWCD commissioners were on a much larger stage than normal, with an audience that included NRCS acting Chief Leonard Jordan, Iowa Governor Kim Reynolds, Iowa Secretary of Agriculture Bill Northey, and representatives from conservation districts across the country.

Here’s a rundown of the PFI members who played an active role or were recognized throughout the event:

Chris Teachout farms near Shenandoah in southwest Iowa, where he has been experimenting with cover crops and other conservation practices such as no-till, terraces, grassed waterways, and wetland restoration as well as forest buffers and windbreaks. Chris frequently shares his experience with other farmers, including presentations at PFI’s 2017 Annual Conference (Cover Crops on Rented Ground; Cover Crops 201 slides and video) and at an upcoming August 29th field day on his farm. 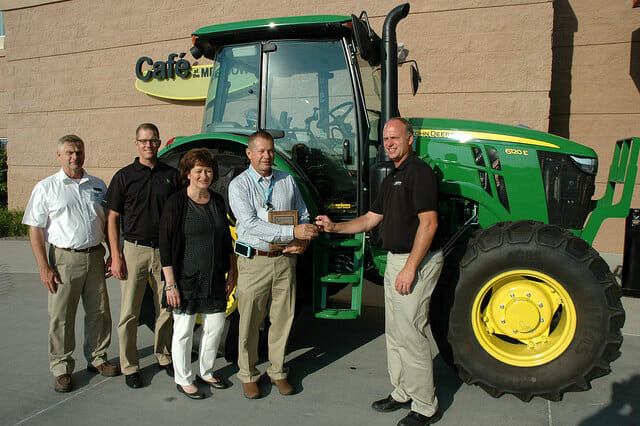 As Conservation Farmer of the Year, the VanWall Group of Perry presented Chris Teachout with keys to a John Deere tractor for 12 months or 200 hours. 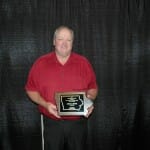 This award is given to an outstanding soil and water conservation district commissioner who has served for five years or less. A commissioner in Tama County, Jack Boyer grows corn, seed corn, soybeans and cereal rye for cover crop seed on his farm near Reinbeck. He has been conducting on-farm research projects to successfully integrate cover crops into his operation for the last six years. Jack regularly speaks about his innovative cover crop research with farmers across Tama county and the rest of Iowa, including this winter farminar and a spring field day.

Tim Palmer of Truro stayed busy throughout the conference due to his role as a Madison County SWCD commissioner and as the first vice president of the National Association of Conservation Districts. Conservation Districts of Iowa president Bob Lynch recognized Tim as a source of inspiration for his own involvement, saying “I’m standing here today because of you, Tim.” 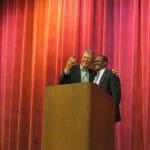 As the outgoing president of the Conservation Districts of Iowa, Bob Lynch was in the spotlight for much of the conference, leading the CDI business meeting, introducing speakers and presenting awards. Bob is active on Twitter and made a point to get “selfies” with many of the speakers, including NRCS Director Leonard Jordan during Leonard’s keynote address! Bob also serves as a commissioner in Humboldt County and implements multiple conservation practices on his farm near Gilmore City. 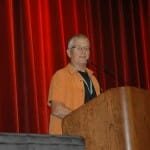 During the CDI business meeting, Cerro Gordo county commissioner Dennis Carney was voted in as the new vice president. His farm in Floyd County has been no-till since 1981 and he has since added cover crops and many acres of CRP. Dennis has been active in a number of agricultural organizations over the years, including FSA County Committees, Floyd County Conservation Board, the Northeast Iowa Research Farm at Nashua, and the Upper Cedar Watershed Management Authority. 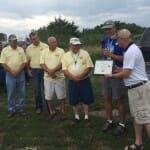 Frederick Martens and the Madison County SWCD are recognized by CDI.

Madison County SWCD hosted a stop on the soil health bus tour to showcase a Badger Creek Watershed Project integrating restored prairie into row crop fields. Along with Frederick Martens, Tim Palmer and the other Madison commissioners received a certificate of appreciation from CDI. (note: on the bus ride to Badger Creek, attendees were shown a video on the prairie STRIPS project featuring PFI member and Buchanan SWCD assistant commissioner Dick Sloan.) 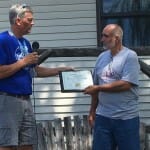 Livestock grazer Bruce Carney hosted another stop on the soil health bus tour at his farm near Maxwell in Polk County. Along with his neighbor Rick Kimberly, Bruce talked about their partnership allowing Bruce’s cattle to graze the cover crops on Rick’s field adjacent to his pastures. Bruce has actively worked with his local SWCD to utilize funding for his conservation practices.

Of the 9 regional directors, 6 are PFI members:

In addition to all the PFI members mentioned above, Alisha and I ran into Henry Wehrman, Mike Henning, Russ Brandes and Kelly Tobin.

CONGRATULATIONS to all our members who were recognized and awarded throughout the weekend, and THANK YOU to everyone for taking a leadership role in your local soil and water conservation district. 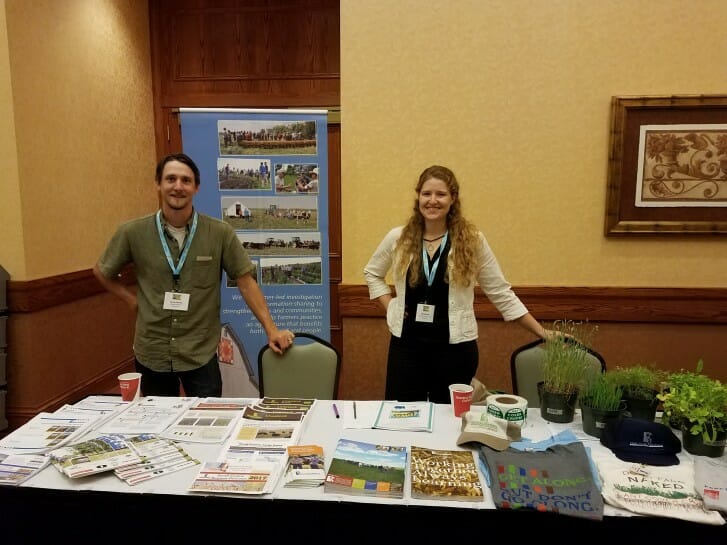