Are Brewing and Distilling Markets for Small Grains Right for You?

If I had a nickel every time someone asked me about the potential of selling small grains to craft breweries and distilleries – I’d be able to start my own brewery by now! Unfortunately, for most of these questions I come up short on answers so I decided to invite some experts to fill in the gaps. Our March 2 shared learning call featured Ryan Burchett, founder of Mississippi River Distilling Company in LeClaire, Iowa and Adam Wagner, farmer and founder of Vertical Malt in Fisher, Minnesota. They went over the grain requirement for each of their respective crafts and the prices and quantities required in each industry. 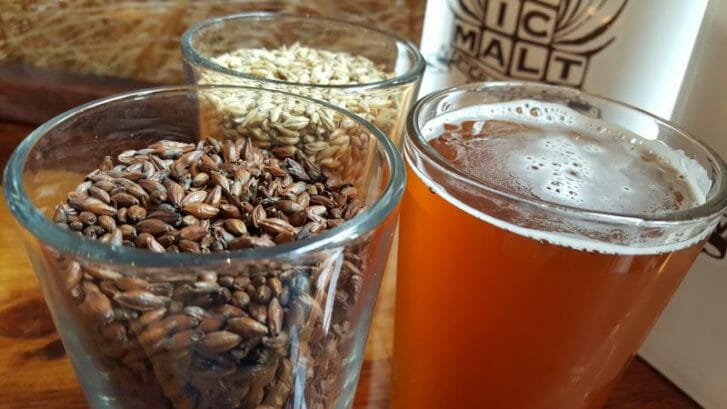 Technically – any grain can be distilled. But the classic spirits like whiskey sell the best, so Ryan sources corn, rye, wheat and barley. “We like to tell the story that grain is from farmers within 25 miles of the place,” Ryan says. “We know where our grain comes from, even the cows that fertilize the field.” He sources all his grains locally and pays $9-12/bushel for conventional grain delivered to the distilling facility. In a year he sources 3,000-4,000 bushels of corn, 1,000 bushels of rye and 300-500 bushels of wheat or barley. When we consider that average rye yield is about 40-60 bushels/acre this means that an entire year’s supply of rye for Mississippi River Distilling Company can be grown on 17-25 acres. In general, you can estimate that 1 bottle of spirits will require around 1.5 pounds of grain, so you can work backwards from a distiller’s capacity to know their grain demands. 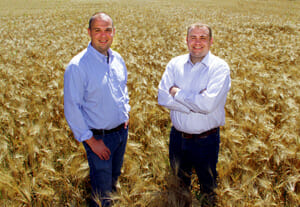 Ryan Burchett (left) and Gary Burchett are co-owners of the Mississippi River Distilling Company. They source 100% of their grain locally from farmers. Photo from: https://www.mrdistilling.com/quad-cities-businesses-partner-to-increase-whiskey-production-in-le-claire/

As for the grain itself the most important qualities are that it be dried down below 15% moisture and it’s clean. Ryan explains, “We’re into the starch in the grain – we’re getting as much fuel in there as possible so the yeast has a lot to work on.” There hasn’t been a lot of rye or wheat variety trial work done with distilling in mind, to this point, but an interesting Minnesota research project that’s getting started this year will test distilling quality of different cereal rye varieties.

Ryan works directly with his sourcing farmers before planting time to estimate volumes of grain that they’ll need for the year. “We try to give them a thumbnail of what we’d like them to plant for us and then we stay in touch as the season goes on so they know if we won’t use all of their grain and they need to start looking for other markets,” Ryan says.

Adam’s family got out of growing barley for the Budweiser plant in Moorhead Minnesota in the 90s when Fusarium Head Blight (FHB) infestations were high and caused many loads of barley to be rejected. But, they weren’t ready to give up the crop yet. “Barley is a great rotation where we live in the Red River Valley,” Adam says. “We were just farmers who got into craft brewing and one thing led to another and we were malting 2-row barley we’d grown on a little five acre field where it was hard to turn around with the big equipment.” This hobby quickly ballooned into a full business. Eighteen months ago Adam brought a 2 ton malting vessel online and this spring will open a second 2 ton vessel. “Having locally sourced malt product is something very attractive to these small breweries who are looking for ways to differentiate themselves from the pack.”

The malting process takes dry grain at 12-13% moisture up to 43-45% moisture by being steeped in water in a climate controlled environment. This tricks the grain into germinating, and it’s allowed to grow for 4-5 days before it’s quickly dried down again to 3-4% moisture. This process releases the enzymes in the grain that are critical for creating flavor in beer. This process brings down the weight of the barley by about one quarter so while 4100-4200 lbs of raw barley goes in only 3200-3100 lbs of malt comes out. 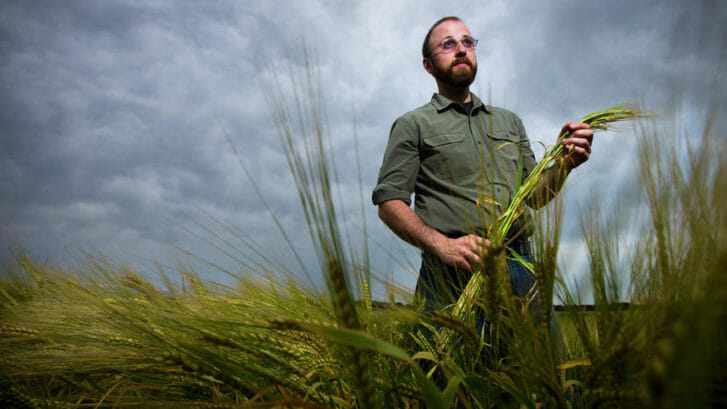 Adam Wagner, President of Vertical Malt, uses malting barley grown on the family farm near Fisher, MN, and processes the grain into malt for use in craft breweries including Junkyard Brewery in Moorhead and the Bemidji Brewing Company. photo by Eric Hylden/Grand Forks Herald

Because high germination rates are critical to the success of the malting process, special care must be taken to prevent sprout damage. Adam recommends harvesting barley on the wet side at 15-16% moisture and putting it in a bin with a drying floor to bring it down to 12.5% moisture. Barley must also be highly cleaned and have protein levels as low as possible, ideally lower than 11%, but no higher than 12%. Because FHB largely washes off during the steeping process, malting has a higher threshold for vomitoxin or DON levels at 1.0 parts per million than other food grade products. “The toxin from fusarium creates a gushing effect in the beer,” Adam says, so it is undesirable, but not harmful. To grow barley for breweries, select varieties that have low protein content and high resistance to fusarium head blight. The American Malting Barley Association releases a list of recommended barley varieties every year, but it’s important to check with your buyer on their preferences before settling on one. For Minnesota growers, barley breeder Kevin Smith recommends Lacey and Tradition for six row barleys and notes that few if any two row barleys are contracted for malting, even if they do have high performance. Thought, working with a smaller, craft brewer or maltster you may have more flexibility. You can access Smith’s yearly variety trail results of six and two row barley varieties here.

Malting barley that meets these specs will bring in $4.50/bushel, but the quantities are small, similar to distilleries. So far, Adam hasn’t had to buy any barley from off his own family’s farm. His 2 ton malting system processes 3400-5000 bushels per year and then he sells it to a number of different breweries in Minnesota. He says, “Two pounds of malt are needed for one gallon of beer. Most craft brewers start in a 10 barrel to 15 barrel range, at 31 gallons per barrel. That’s between 620 and 930 pounds of malt per batch.” That’d be just 775 – 1163 lbs of barley or 16 to 24 bushels per barrel. With average barley yields of 20-40 bu/acre, that means that 1 acre of barley is roughly equivalent to the malt needed for 1 barrel of beer. Then you can easily estimate production area needed based upon the brewery’s capacity.

The take away is, Ryan says, “Any brewery or distillery that’s going to be popping up in your neighborhood will be on the scale of us. You won’t be delivering semi-loads of grain.” A fun endeavor? Certainly. Perhaps even a profitable one – but not scalable to large acres unless there is a large volume maltster or distillery in your area.

PFI organizes shared learning calls like this one on a nearly monthly basis. We’ll be off for April and May because farmers will be busy in the fields, but we’ll be back at our usual first Friday of the month Noon – 1 p.m. slot in June. If you’d like to receive our monthly small grains newsletter and be reminded of upcoming small grains calls, contact alisha@practicalfarmers.org.