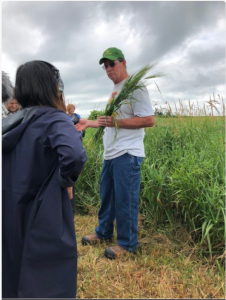 Darrell Steele speaks to reporters at Rob Stout’s farm about the cover crops and barley he’s been growing.

Darrell Steele, a PFI member from Washington County, wanted to start cover cropping on his farm after attending a soil health workshop. Starting with a typical cover crop of cereal rye on his corn and soybean farm, he saw the soil health benefits and began to think about how he could add more diverse cover crops into his rotation. “The main reason I got into growing small grains is because of erosion,” Daryl says, “I wanted a practice that would help my soil.”

To get the most out of a diverse cover crop mix, they need to be planted early — in July or August, well before corn and soybean harvest. Since Darrell raises and feeds his own hogs, he saw an opportunity to grow a small grain like barley to feed to his pigs, giving him the window to plant a diverse cover crop mix following barley harvest in July.

Small grains are feed alternatives to corn and soybeans that can be useful in pig rations. When well-balanced small grain rations take the place of corn and soybeans in swine diets, they have the potential to reduce high diet costs pig farmers face. Feed costs make up a good amount of a livestock producer’s expenses. For swine farmers, lessening feed cost is music to their ears.

These are the questions I hope to work alongside PFI farmers to answer in this series. Farmers have expressed interest in incorporating small grains in pig rations, but lack the resources to know how much to include. Similar to Darrell, who began growing barley on his farm and is now interested in feeding that barley to his pigs.

“I don’t know how much I’ll yield and then put into my rations for the pigs,” He says. Through our work, research and PFI farmer knowledge we hope to provide information to share with farmers on how to properly manage incorporation of small grains in pig diets. 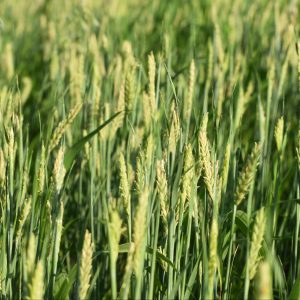 Barley has a similar nutrient profile to corn making it a versatile feed grain. Compared to other small grains, barley has a lower metabolizable energy (ME) value than rye and corn. 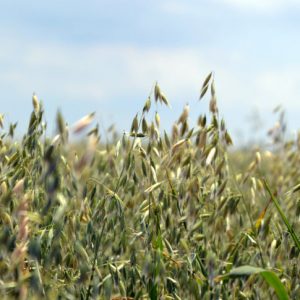 Oats as a feed grain for pigs is nothing new, yet many producers are concerned over the high fiber content and low test weight.

The high crude fiber content of oats is desirable for pigs at all stages of production, but the concern is balancing fiber content without limiting energy requirements to meet daily gains. 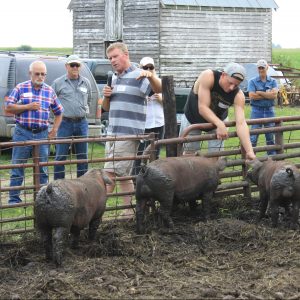 Rye is commonly known by farmers in the Midwest as a cover crop. A small amount is grown for grain, and an even lesser amount is being fed to pigs.

Across Europe, pig producers include rye in feed rations for their grow-finish pigs, gestating and lactating sows. Rye has a mixed reputation due to its susceptibility to ergot, a fungus that negatively impacts pig health and performance. 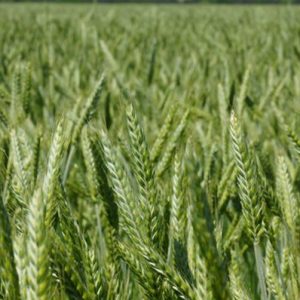 Triticale is a hybrid of wheat and rye that combines the yield and grain quality of wheat with the disease resistance and a tougher tolerance for environmental stressors of rye.

This blog covers the possibilites of including triticale in pig rations. In studies from Florida, North Dakota and Canada, grow-finish pigs fed triticale performed similarly to pigs fed corn-based diets when rations were adequately balanced. 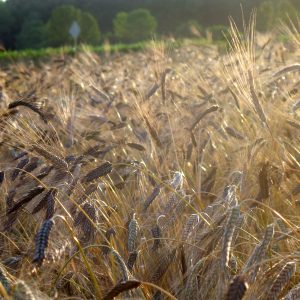 Wheat can be used as the sole cereal grain in grow-finish pig diets. While wheat is an expensive feed grain in Corn Belt cash grain markets,, it can have a beneficial role in an integrated crop-livestock system when fed on or near the farm.

Pigs fed wheat-based diets can grow as efficiently – and with similar meat quality – as pigs fed corn-based diets when energy and amino acids are balanced.

If you are searching for businesses that sell, buy and clean small grains in Iowa and the Midwest, check out our small grains business directory.