Spring in Iowa. While most of Iowa’s agricultural landscape is awaiting the emergence of newly planted seed for an annual flush of field crops (and vegetable crops!), the rare pockets of fruit and nut orchards are anticipating bud break, when flower buds break their winter dormancy to fruit another year. If attendance at PFI events is any indication, more farmers around the state will be watching for bud break in future years.

Apples are Iowa’s largest contribution to a specialty crop market, but according to the 2012 Census of Agriculture (the most recent data available), the total sales account for just 0.10 percent of total U.S. sales. Though not a force in the commercial market, Iowa’s apple orchards are extremely important to their communities and provide a relatively large volume of fresh produce to local markets. The census revealed that 251 operators in Iowa produced apples on 904 acres of land with fruit-bearing trees. But the census contains a more interesting number: 348 Iowa operators reported having 1,148 acres of apple trees. The difference between the two sets of values likely represents operators with apple trees that were recently established and not yet bearing fruit.

Over 60 of these apple orchardists gathered at the Commercial Apple Orcharding Short Course, a one-and-a-half-day workshop just prior to PFI’s 2019 annual conference. Topics for the course included orchard design and planning, packhouse design, understory weed and fertility management, and production of hard cider (complete with a cider tasting).

Mike Malik opened the course by sharing his financial information and installation process for 14,000 cider apple trees he planted in 2017 near Iowa City. He plans to press and sell the juice for other cideries to ferment. As a very new grower, Mike highlighted the many mistakes he’d already made and how he had made changes to correct them, hoping the others in the room would avoid making the same ones.

Deirdre Birmingham, another first-generation orchardist and cider maker, blended her rich agricultural background and a passion for dry ciders to build The Cider Farm in southwest Wisconsin. For her expertise with tannic English and French cider apples, which are raised certified organic, she was affectionately dubbed “the maestro” by her fellow cider-makers at the short course. In 2003, none of the tannic apple varieties she sought were available commercially in the U.S. Undeterred, Deirdre learned to graft, acquiring scionwood from private collections and the U.S. Germplasm Repository. In her presentation, Deirdre shared in-depth details about the quirks of these rare apple varieties, and lessons she and her husband have learned as they continue to build their knowledge of how to ferment and sell artisan hard cider. 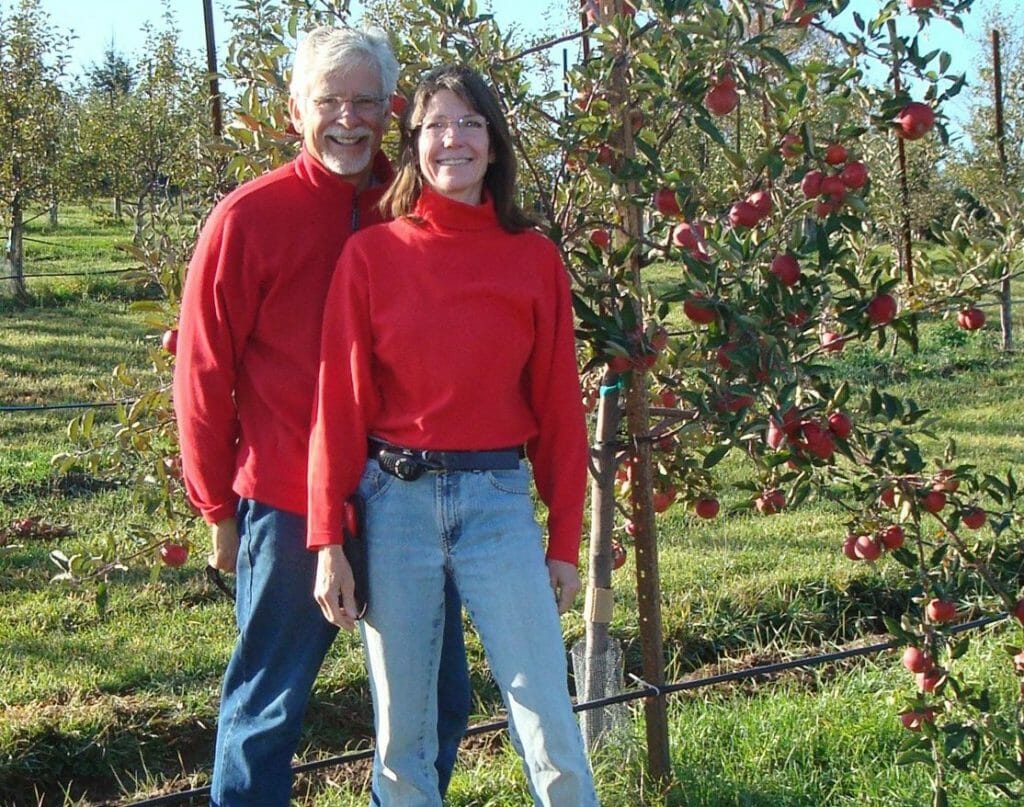 Deirdre Birmingham and her husband, John Biondi, of The Cider Farm in southwest Wisconsin.

Benji Deal, of Deal’s Orchard in Jefferson, and Paul Rasch, of Wilson’s Orchard near Iowa City, both entered the hard cider market as a way to productively use more apples out of their own orchards. While Paul is experimenting with 5 acres of cider-specific varieties, both orchards primarily use fresh-eating apple varieties. Attendees appreciated the tips and subtleties each shared about licensing, scaling up and how the cider business fits into each orchard’s farm vision. 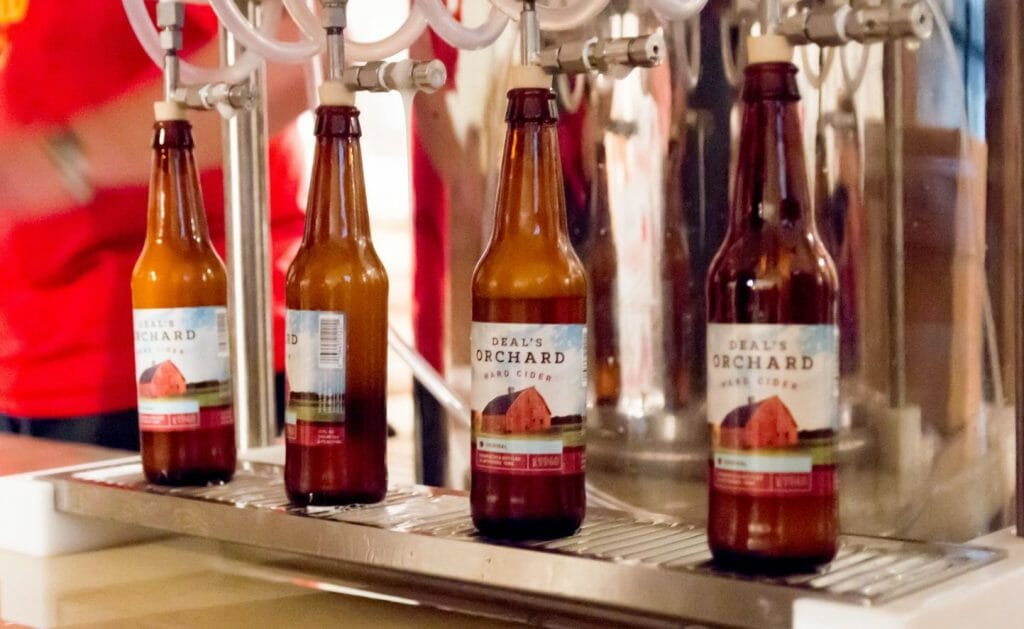 Cider being bottled at Deal’s Orchard, near Jefferson, Iowa.

Steve Louis is a fourth-generation orchardist, with 180 acres of apples at Oakwood Fruit Farm in Wisconsin. About 15 years ago, Steve began the shift away from semi-dwarf to high-density, eventually settling on 3-foot spacing between trees with 12-foot spacing between rows. Each year, Oakwood plants 10,000 to 12,000 trees, with the goal of replacing the entire orchard in 20 years (5 percent each year). Though Steve’s orchard is much larger than any orchard in Iowa, Steve’s extensive knowledge and experience with rootstocks, varieties and management catalyzed a rich conversation among the group. Even with all his experience, Steve emphasized that it’s important to experiment and find what works in each farm’s system, and that there isn’t one right way.

In PFI’s big-tent fashion, Steve Louis and Michael Phillips (the annual conference keynoter and renowned orcharding expert) co-presented on understory management for orchards. Their management systems are very different, but not irreconcilably so, and both were proud to be presenting with, and learning from, each other’s experience. “We’re thinking about how we’ve done things,” Steve said. “We used to want the area under trees to be as bare as an asphalt parking lot. We’ve discovered that’s not very healthy for the soil, and we’re changing our ways.” As Iowa’s orchard landscape appears to be gaining ground, both he and Michael were optimistic that orchardists here would find their own nuanced way of building commercial orchards.

Apples are not the only perennial tree crop available to Iowa growers. While some may want to grow unique fruits like pears, cherries or persimmons, many new growers are interested in nuts. The nut crop leading the cluster is the Chinese chestnut. “This is a very profitable crop to grow,” said Tom Wahl, who owns Red Fern Farm near Wapello with his wife, Kathy Dice. Tom and Kathy have grown virtually every species of fruit and nut crop that will grow in a southern Iowa climate, and they said nothing compares to chestnuts in terms of being easy to sell at a really high profit. In February, PFI partnered with Red Fern Farm to offer a full-day Beginning Chestnut Growers workshop that drew over 100 attendees. The event sold out, as did the to-capacity field class Tom and Kathy led on their farm in September 2018. The demand highlights the strong interest people have in learning about growing tree crops. 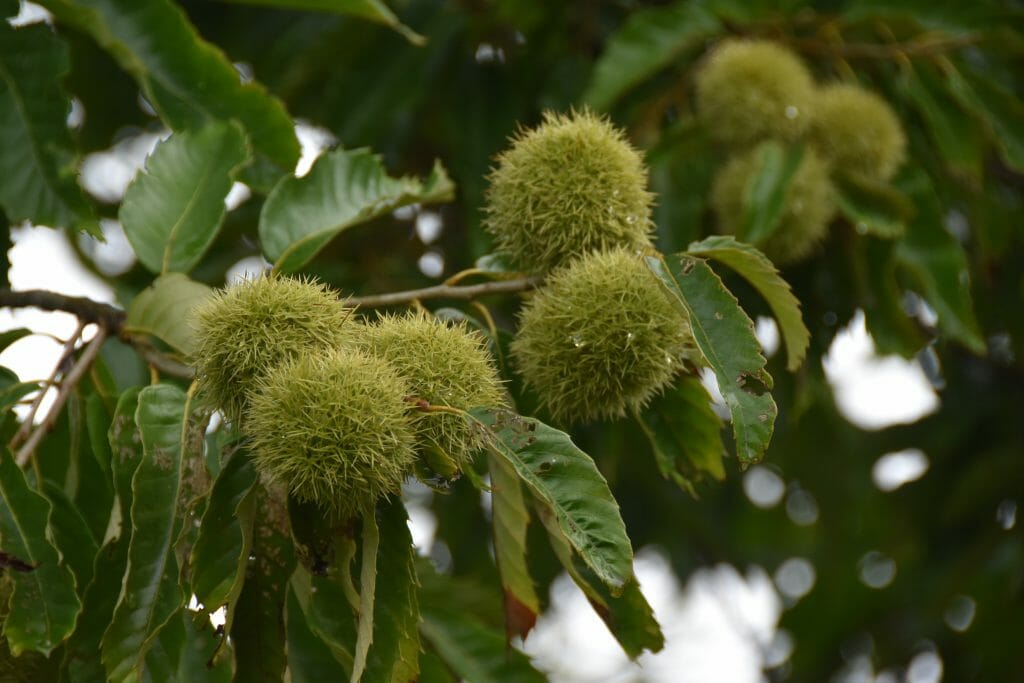 “On our mature trees, we’re making around $10,000 per acre on a crop we don’t have to plant every year – or weed, cultivate, spray, prune or harvest. Or sort, refrigerate, bag or ship,” Tom said. “All we have to do is get the grass mowed before the nuts start falling. Mow the grass and collect the money; the trees take care of themselves.”

Tom and Kathy sell all the chestnuts they grow on their farm via U-pick. For those who wish to sell wholesale, they recommend going through the Prairie Grove Chestnut Growers, based in Columbus Junction and managed since 2013 by Roger Stone. Roger currently buys chestnuts from 62 growers in Iowa, Missouri and Illinois, and sells them to retail outlets and customers throughout the U.S. During the workshop, Roger shared clear, easy-to-follow do’s and don’ts for harvesting and selling chestnuts to the cooperative. “Right now, the supply of chestnuts is the size of my thumb,” Roger said. Holding out his arms wide, he continued, “and the demand is this big. We are in the embryo stage of this market. Last year we sold 84,000 pounds of chestnuts. In five years, I think we’ll be selling 200,000 pounds. In 10 years, close to half a million pounds. I don’t have any doubt that I can sell that many chestnuts.” 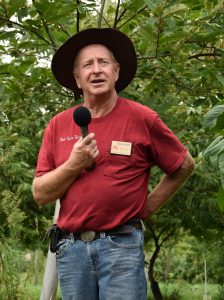 Roger thanked Tom and Kathy, and Mike Gold from the Center for Agroforestry at the University of Missouri, for starting growers in the right direction to raising high-quality chestnuts. “Twenty-five years from now, we’re going to look back and see that the U.S. chestnut industry got started in southeast Iowa.”

“Most Americans don’t realize how big chestnuts are, because we lost our native [American] chestnut about 100 years ago and there’s no one left that remembers them,” Tom said. “But for most of the rest of the world, chestnuts are a really big deal. Anyone who grew up in Europe or Asia grew up with chestnuts, and are really excited about them. Now they live here and want to buy them.”

As interest in tree crops continues to grow, PFI plans to provide more farmer-led events and programming to better connect orchardists and nut growers in Iowa.

From the Executive Director: Inspiration from PFI Leaders