Food Forests are an attractive concept; an integrated system of lower-maintenance perennial crops that provide diverse habitat, ecosystem services and nutrient rich foods for humans. Starting a food forest is intimidating. Having a planting plan for perennial crops is essential, and to complete a planting plan requires knowledge of your land, and the basics about fertility needs, growth habits, pest and disease pressures, and maintenance for each species you intend to plant. For many people interested in food forests, the process ends here, with a well-thought-out landscape dream rendered on paper. 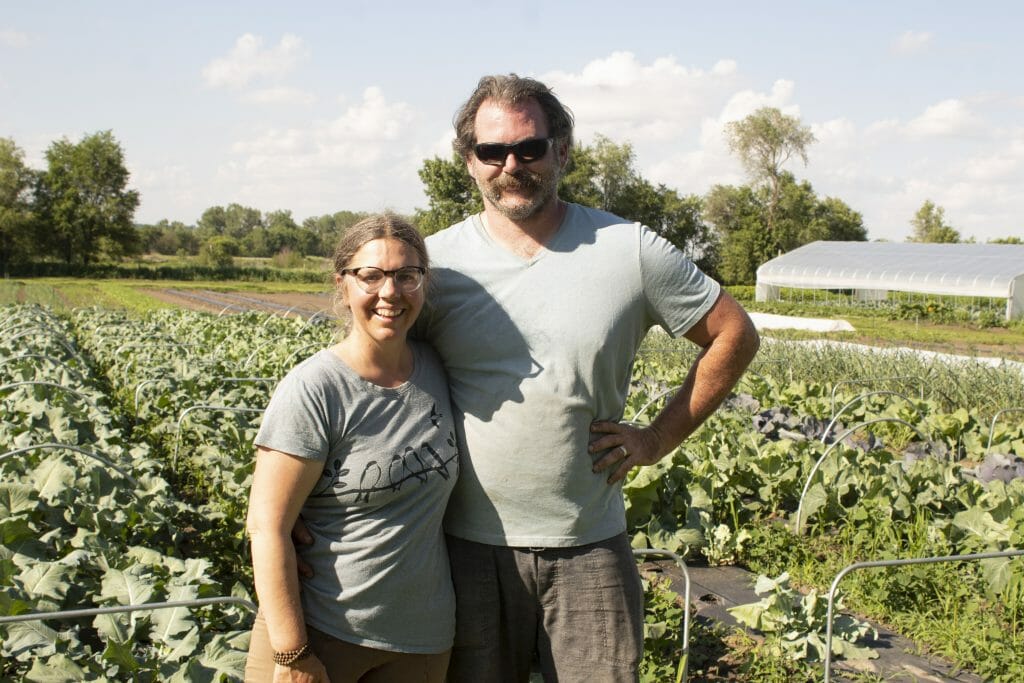 Terra and Matthew Hall own and operate Rhizosphere Farm in Missouri Valley, IA.

Taking the next steps requires the dedication of several precious commodities: money, physical labor, money, physical labor, and time, and time and time. It requires a combination of rare character values: creativity, resourcefulness, confidence, perseverance, patience, and optimism (with a heavy dose of pragmatism). Eventually, it will also require savvy marketing, a tidy business plan, good customer service, and all the other hallmarks of a successful direct-market farm. 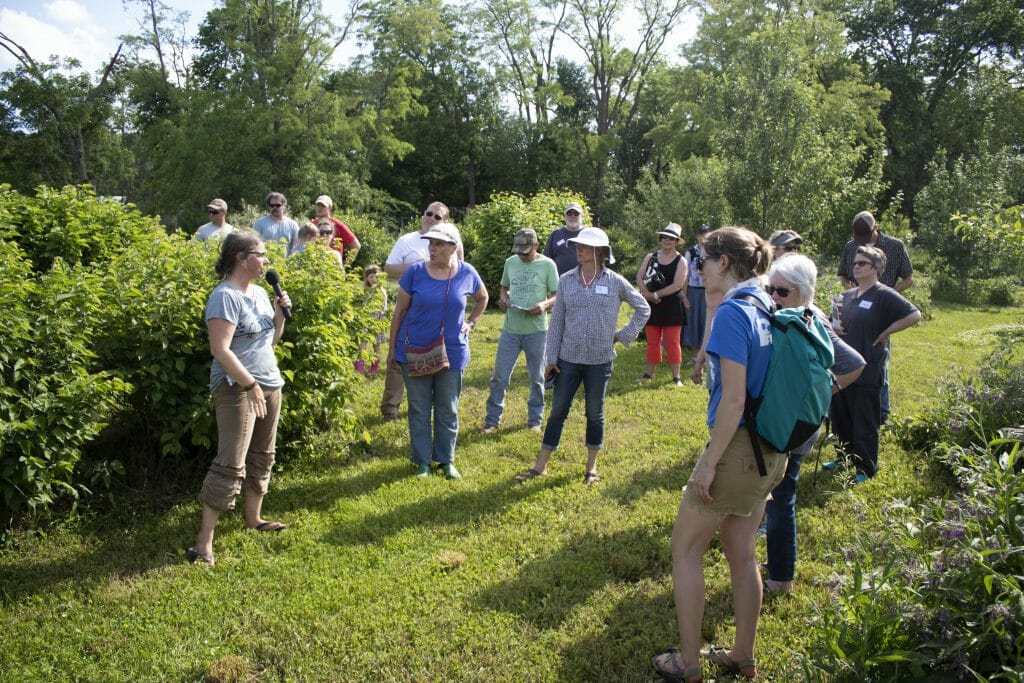 Terra addresses the group, with a hazelnut bush behind her.

Who does this? More and more farmers are slowly incorporating concepts of food forests into their farms, many in small ways, and some in substantive form. Matthew and Terra Hall bought the land to create Rhizosphere Farm in 2013, and in 2014 began building a 1.5-acre food forest while also farming annual vegetable crops for farmers markets and restaurants in Omaha. Now five years in (in 2019), the Halls hosted a field day to show the early stages of the food forest (they also discussed annual vegetable production, particularly heirloom tomatoes, in depth).

“Welcome to the depth of plant madness. This is what happens when you turn a hobby into a passion,” said Terra as she opened the gate of the 8-ft deer fence, which encloses the 1.5-acre food forest. The food forest contains over 40 different varieties of trees, shrubs, and berries, plus additional herbs and companion plants that serve as dynamic accumulators and nitrogen fixers. Species include: grape, plum, cherry, elderberry, gooseberry, gogi berry, currants, honey berries, rhubarb, hazelnut, peaches, apricots, seaberries, Asian pears, European pears, chestnuts (lost to winter), apples, paw paws, aronia berries, chives, witch hazel, horseradish patch and comfrey, among others. Hedgerows along the fence nearest the road include shipova (which also produces fruit), pea shrubs, black haw viburnum. 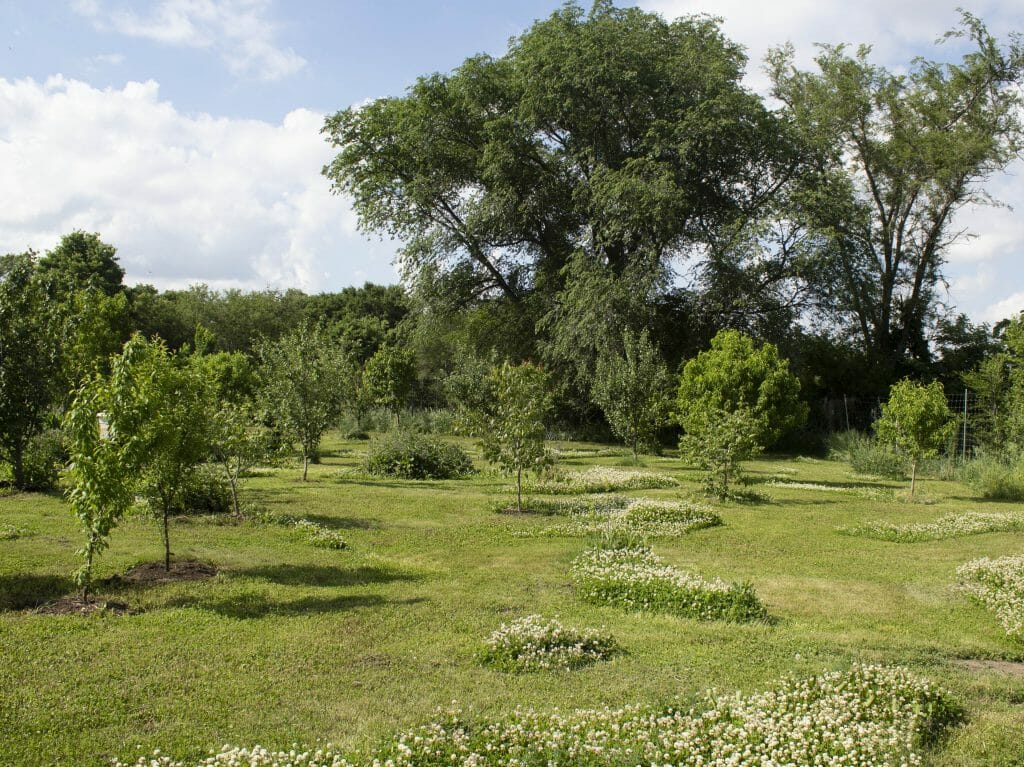 The early years of a food forest.

Terra planned for the tallest trees to be on the north side, so that the sun in the south is still available to berries and shorter shrubs. On the southern-most end, Terra plans to have a pond with some swales, but that project is still a ways in the future. 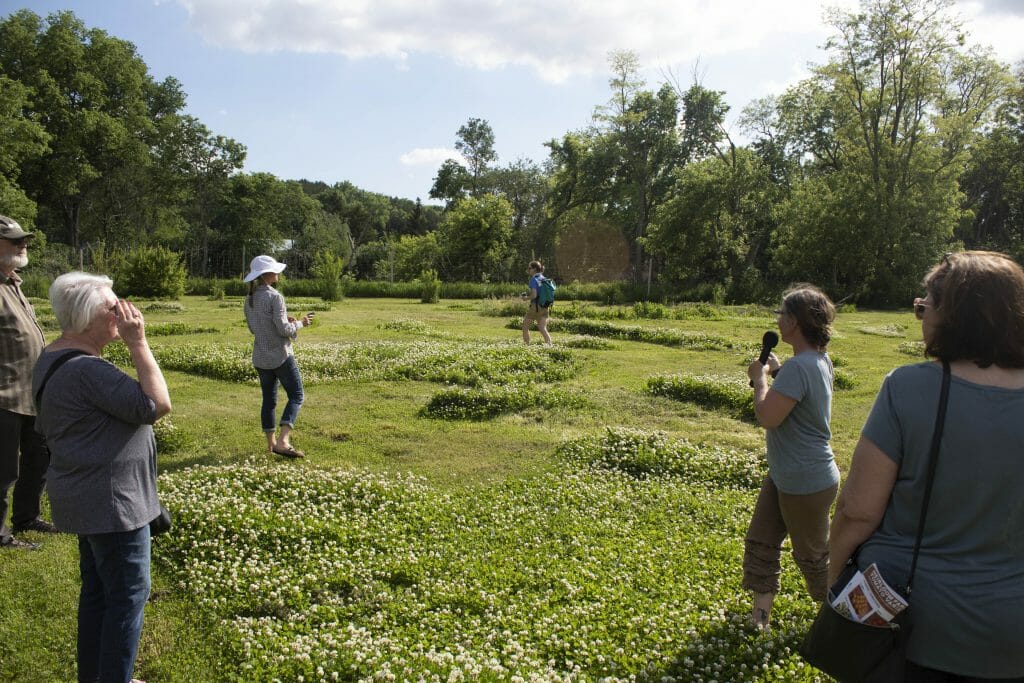 Terra one day plans to install a pond and swales on the south end of the food forest, where the woman in the backpack is walking. 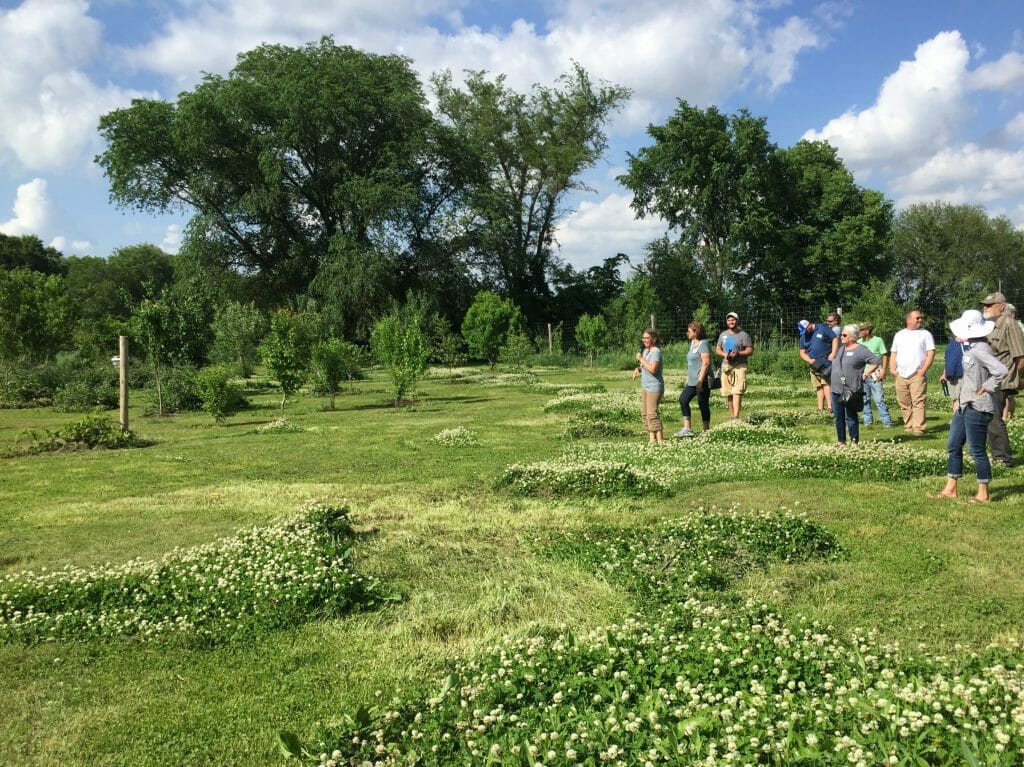 Looking north in the food forest. At Terra’s request, Terra’s mother “artistically” mows the grass to allow clover to flower in patches for the pollinators. 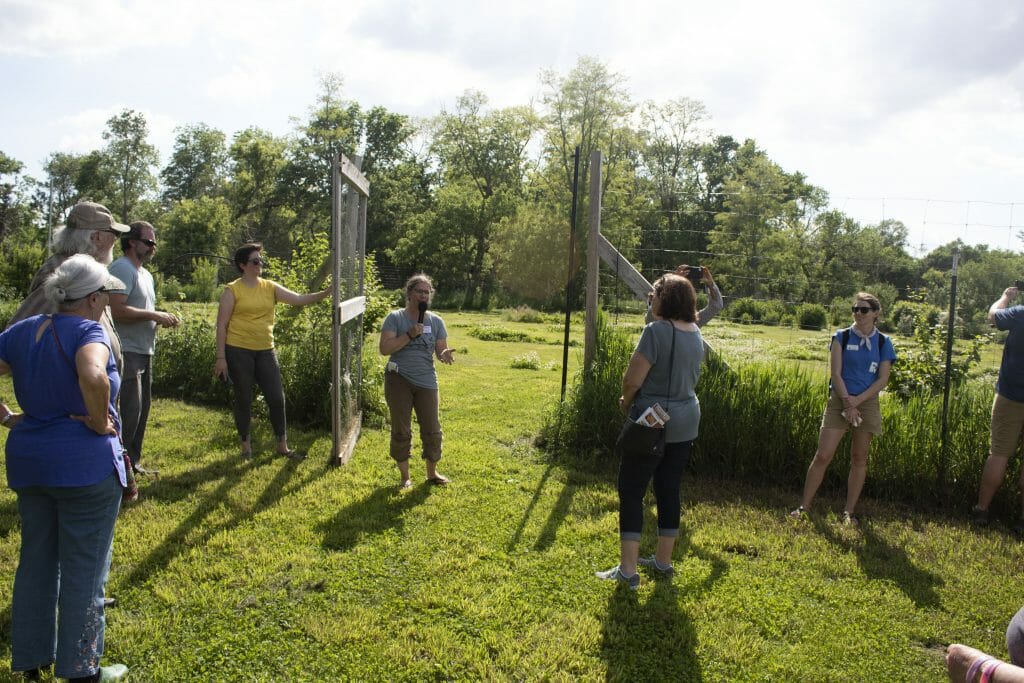 Standing outside the deer fence gate of the 1.5-acre food forest.

All the trees and shrubs in the food forest were planted as whips (trees), transplants or bare root cuttings sourced from Fedco and One Green World between 2014 and 2018. Plants were watered until they were well-established, using tree bags or a self-moving sprinkler. Terra was very clear about the profit generation of their food forest: “This is not a good money-making adventure that we’re on, here. Some of these things have started to pay dividends, but most have not. For example, peaches. If we don’t stop the bugs from eating them, we won’t get enough of the harvest as marketable fruit to make money on them.” Terra did note that 2019 seemed to be a really good fruit set for the peaches, so she hasn’t given up on them as profitable crop, yet. 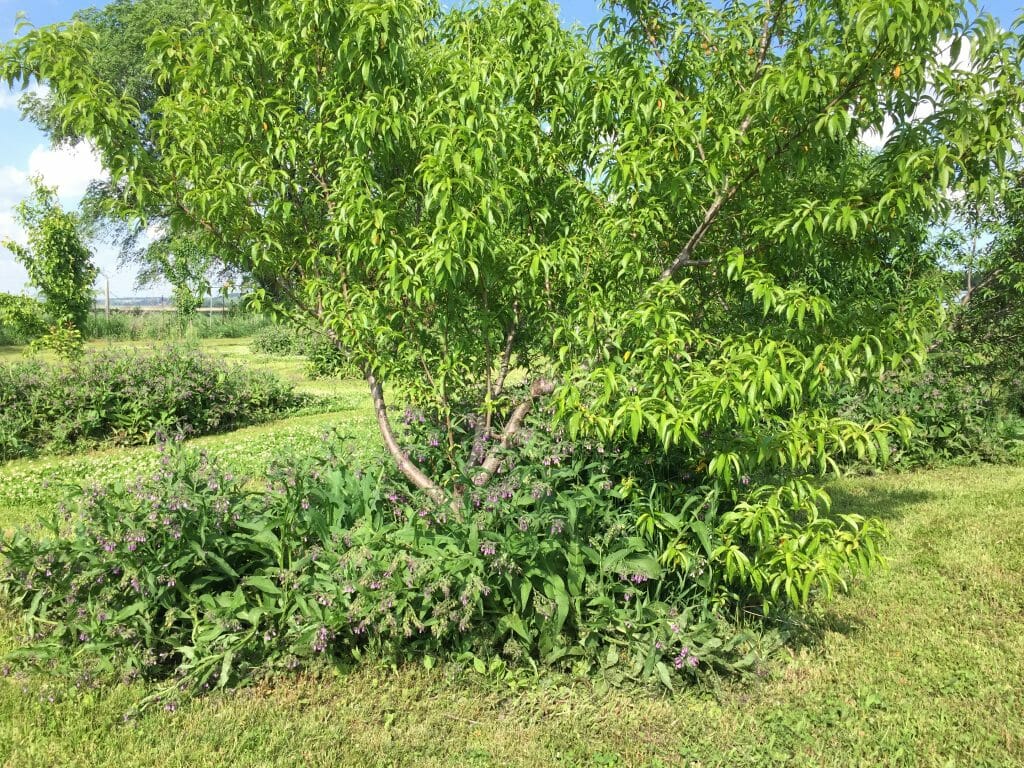 A peach tree with comfrey surrounding the base. “Comfrey is a good thing if you can manage it. It’s a dynamic accumulator, and brings a lot of pollinators. But, the comfrey can block air to the trees, so you need to be willing to manage it and cut it down. In two weeks it will be back; you’re never going to destroy your comfrey. You can use it as mulch; not right next to the tree but as an outer layer to beat back the grass,” said Terra. 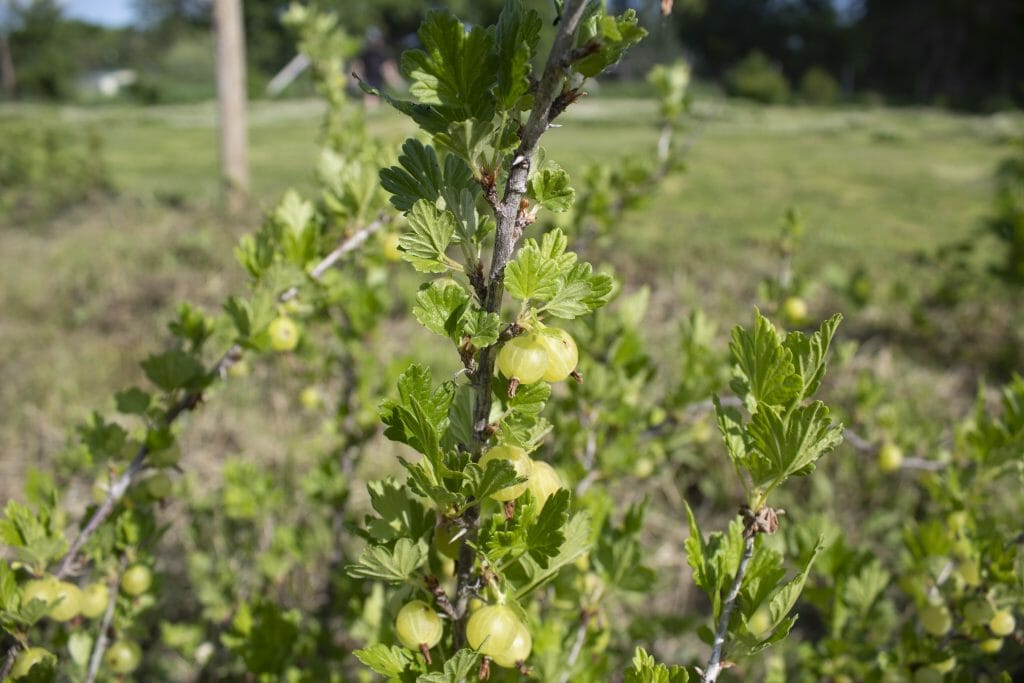 Gooseberries, not yet ripe. 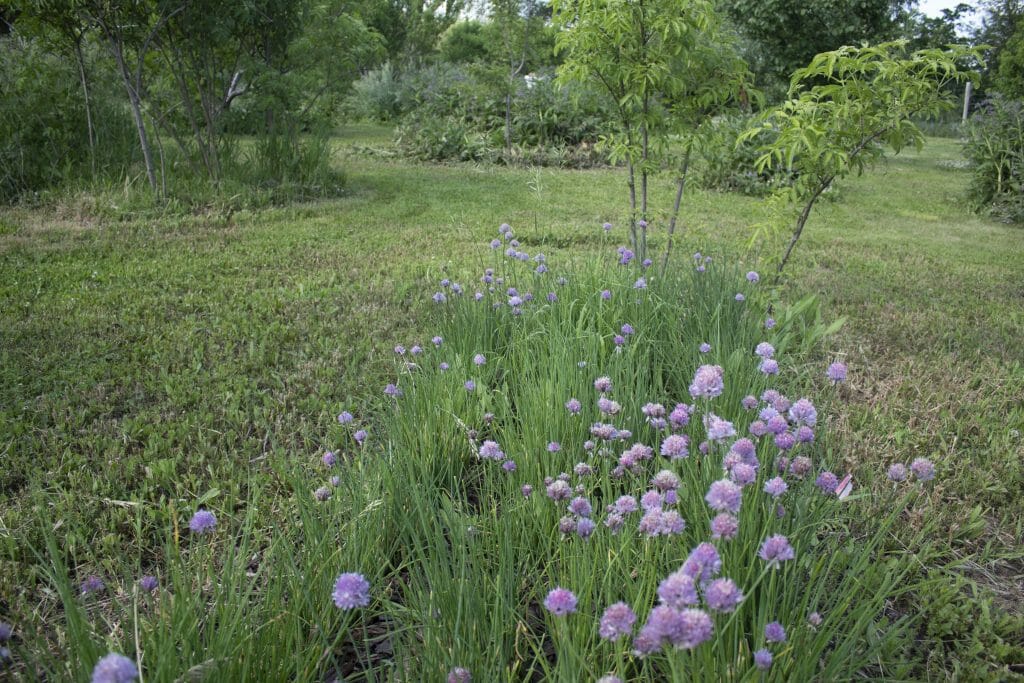 Chives, with elderberry in the background. 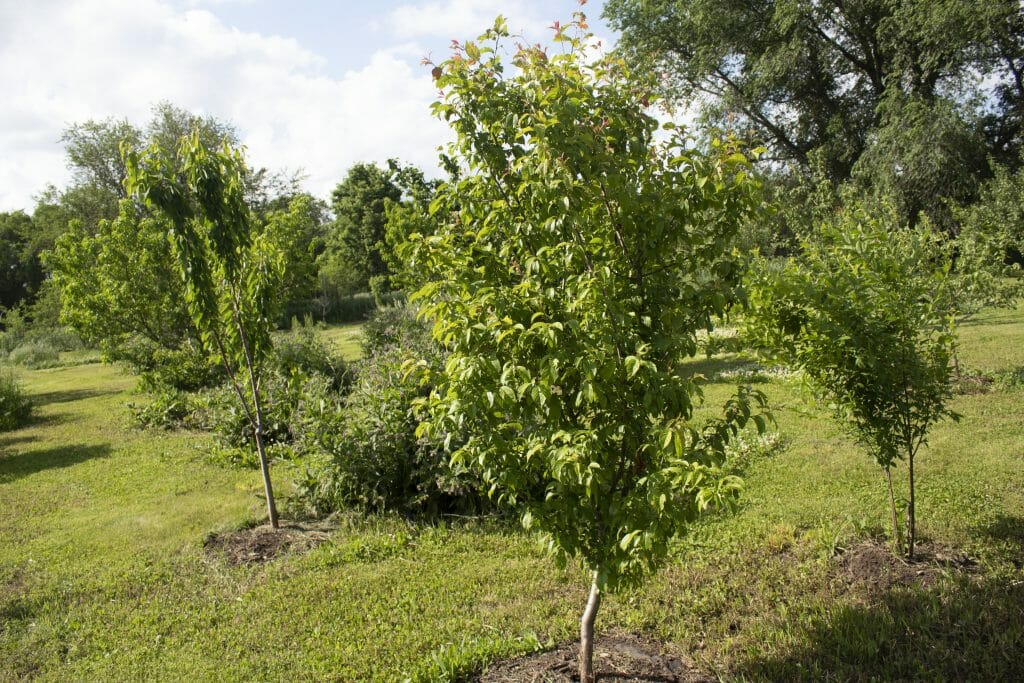 A collection of stone fruit trees. 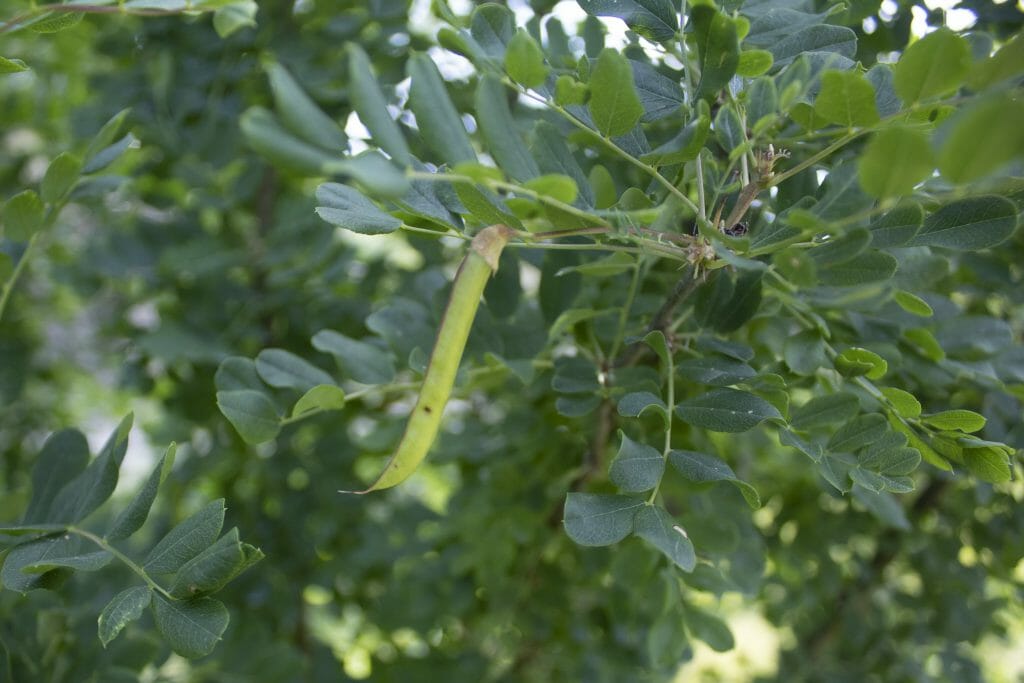 The Siberian peashrub has attractive foliage and edible peas, though Fedco suggests they are perhaps best for chicken feed.

For now, Terra and Matthew are simply trying a bunch of different things in the food forest to see what works; what they like, and what they can sell. “Knowing what I know now,” said Terra, “I would concentrate on certain things, like the Asian pear. No pests, it hardly need anything, and they produced from year 3. We take them to market, to restaurants, people want them and they grow great on our site.” The European pear and aronia berry are similarly successful for Terra. Like many orchardists, the Halls struggle with Japanese beetles. “We use our honeycrisp apple tree as a trap crop,” she joked. To prevent Japanese beetle damage, they use insect netting on their highest priority trees, like peaches. The netting is a lot of work, she notes, but it is effective.

To learn about other food forest examples in Iowa, see the following resources on the PFI website: