A Look Back at PFI’s 2019 Habitat Field Days

This summer Practical Farmers of Iowa facilitated several habitat and conservation-focused field days. We want to share just a few highlights from these field days, including some information on the PFI member-hosts who opened up their farms and their operations to share their experiences with the public. 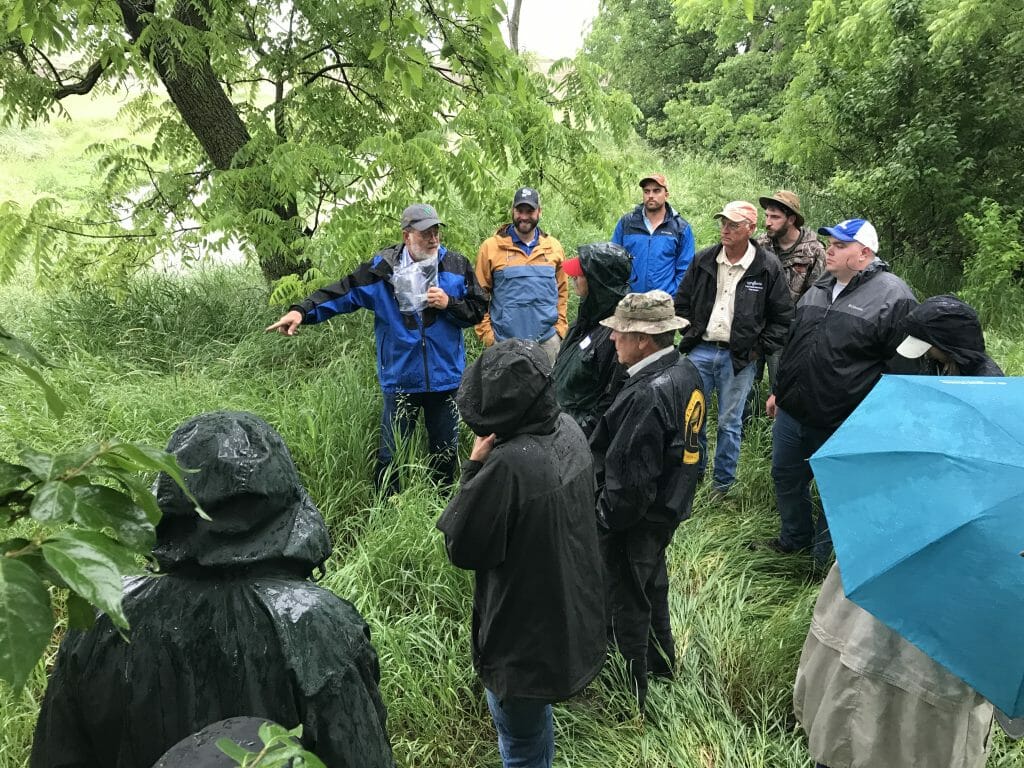 Two of our first field days this season were held in conjunction with partner organizations. In western Iowa on the border of Pottawattamie and Cass County. PFI hosted a field day with Pheasants Forever and Quail Forever. Despite an extraordinarily rainy evening, about 25 people showed up to hear host Bob Zimmerman’s experiences with on-farm habitat establishment and management. 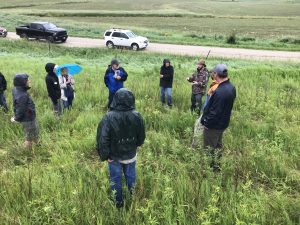 Bob Zimmerman and Nicholas Salick discuss the establishment of the buffer strip.

Joined by biologists Nicholas Salick, Kelsey Fleming and Josh Divan from Pheasants Forever, Bob discussed the history of the South Place Farm that he’s managed for the last 20 years with wildlife conservation as a specific goal. From upland buffer strips to sedimentation basins with stop-log control structures, Bob has worked with Pheasants Forever farm bill biologists to install a variety of conservation practices that benefit not only wildlife, but also water quality and agriculture resiliency.

“It really is a partnership,” Bob explained while standing in a buffer strip in the drizzling rain. “It wouldn’t have got done without the technical and cost-share know-how that Pheasants Forever provided.”

For Bob, the result is a special place full of memories. “You haven’t lived until you’ve seen a sunset at the South Place,” he told field day attendees at the beginning of the field day. And while the rain dampened some of the property’s charm, the skies cleared just long enough as the field day came to a close for attendees to understand exactly what he meant.

The next day, PFI hosted a field day in Peterson, IA in Buena Vista County in partnership with The Nature Conservancy (TNC). This field day focused on the grazing of native perennials (prairie). In contrast to the previous day, the weather was beautiful and almost 80 people gathered at the Buena Vista County Park to learn about TNC’s innovative partnership with local ranchers. 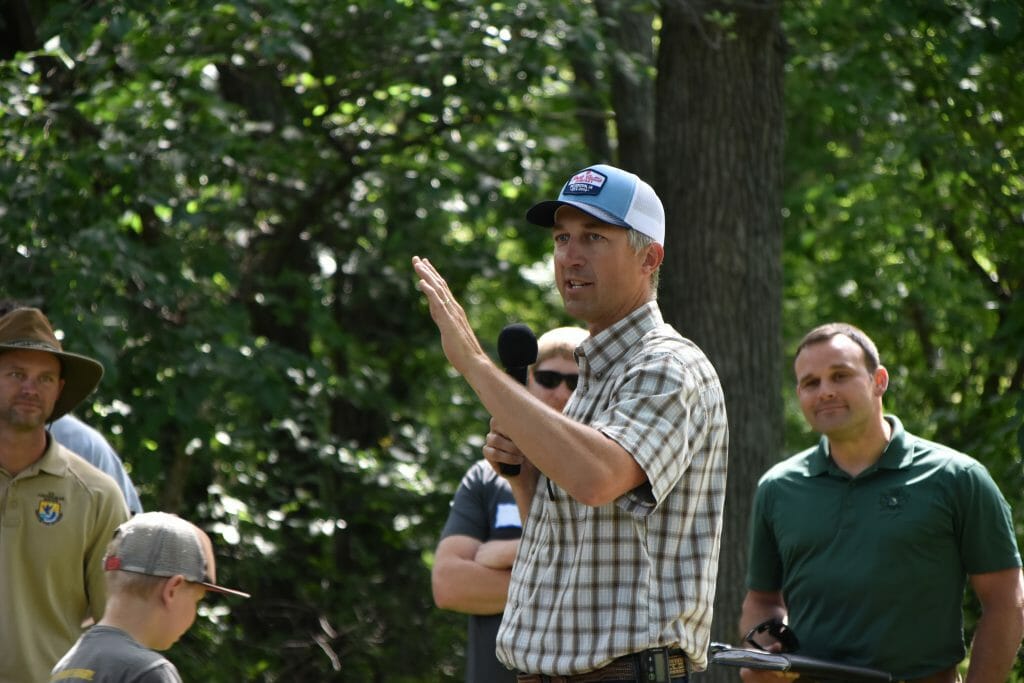 Field day host John Rock explains how they move the cattle in and out of the TNC-owned preserve. 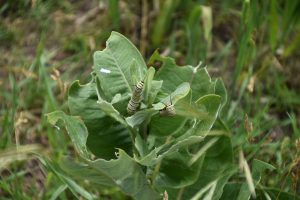 Hosts John Rock and Aaron Nelson, who farm and raise cattle in the region, joined TNC Little Sioux Project Director Amy Crouch to talk about the conservation leases they use to graze cattle on TNC-owned preserves. Both sides talked about the arrangement as a win-win; for John and Aaron, they have access to green grass in early-mid May that would not otherwise be available. For TNC, the mid-May to mid-June/July grazing schedule resulted in reduced pressure from cool season exotic grasses, which the cattle naturally favor at that time of year.

Participants also toured a pasture that John has been rescuing from cedar trees over the last several years, using cattle as disturbance to encourage native species to return and flourish. Overall, the field day illustrated that, contrary to popular belief, cattle and wildlife habitat can coexist. 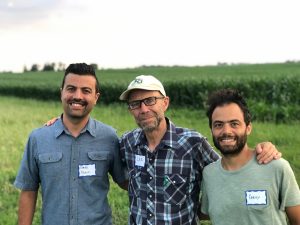 and saturated buffers. Lee, who is the recipient of PFI’s 2019 Farmland Owner Legacy Award, is a rare landowner in Iowa who encourages experimentation and cutting-edge conservation.

“We call it the Tesdell research farm,” said Nick Helland, one of Lee’s renters. “We’ve had a chance to use this as a playground to see what works.”

At the same time, Lee praised his tenants for their willingness to go along with his ideas, no matter how crazy they might think he is. “This work on my farm wouldn’t be a reality if I didn’t have a neighbor like Mike.” 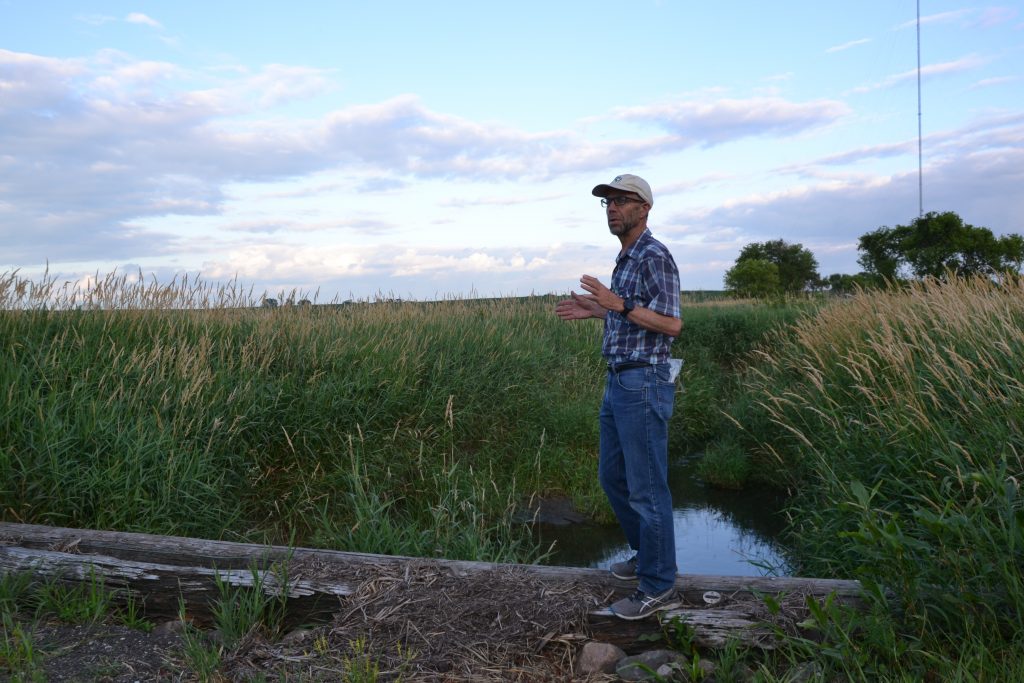 Lee Tesdell overlooks the creek that runs through his farm while discussing the saturated buffer that borders the waterway.

Lee’s farm provides a unique opportunity to see an entire system of conservation practices, in-field and edge-of-field, working together on the landscape. From the cover crops to the prairie strips to the saturated buffer that borders the creek, Lee’s farm is a living demonstrations of some of the most cutting-edge conservation practices available to farmers and landowners. “They key is to educate yourself, look at the research” Lee said. “Meet with your operator and see what you can come up with.” 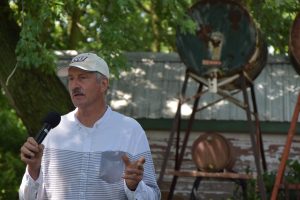 Field day host Paul Mugge explaining why on-farm habitat is important and how he’s partnered with Xerces to make it happen.

In mid-July, in northwest Iowa near Sutherland, PFI hosted back-to-back field days at Paul Mugge’s organic farm. The morning session focused on habitat, specifically habitat for pollinators and other beneficial insects (like predatory ground beetles) and PFI partnered with The Xerces Society. Despite iffy weather at the start and a few scattered thunderstorms that caused participants to seek shelter in a nearby barn, 45 farmers, researchers, students, and bug lovers joined up to explore Paul’s beetle banks and prairie strips.

Paul has been a long-time believer in on-farm habitat. In a 1998 Practical Farmer article titled, “The value of biodiversity,” Paul stated:

“Ecosystems are more than the sum of their parts. They are more than collections of species or genes; they are functioning, synergistic wholes, processes as well as parts, and many are in decline worldwide.” Paul Mugge, “the Practical Farmer” 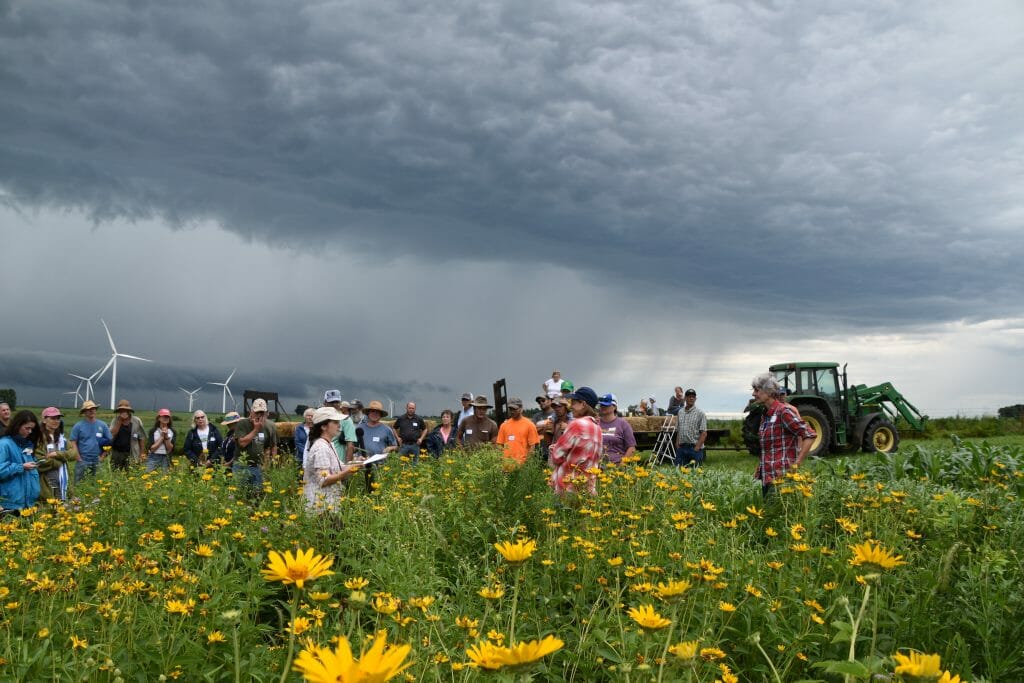 Attendees at Paul Mugge’s field day explore a prairie strip while a thunderstorm rolls by in the background.

Paul practices what he preaches on his farm. He has buffer strips, beetle banks (strips of raised earth planted to native grasses with some forbs), and prairie strips across his property. Some are mature, having been around for more than a decade, while some are just in their first year of establishment. Paul talked about some of the challenges managing new habitat plantings in the field.

“It’s hard to go out there and say I’m going to mow all those pretty flowers,” he explained during the field day, “but sometimes that’s exactly what you have to do. And then when you mow it can leave that residue behind that seems like it could smother everything out.”

“The challenges mean you have to do your homework,” Paul cautioned, “You have to make use of all the stuff out there. There are a lot more people trying sustainable practices who are willing to share their knowledge, and there are a lot of resources—find them and use them”

In September, PFI again partnered with The Xerces Society to put on a field day at Scattergood Friends School near Iowa City. Like the field day at Paul Mugge’s, this event focused on pollinators and beneficial insect habitat, but this time within a fruits and vegetables farm setting. Scattergood teacher and farm manager (and PFI board member) Mark Quee hosted the event. 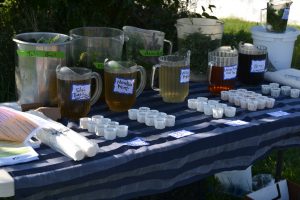 With almost 70 people in attendance, the day featured conversations about habitat design and protection, establishment of habitat from seed vs from plugs, weed control and site prep for habitat establishment and the ecological and production benefits of habitat. Field day attendees also got to enjoy a native tea tasting and explored the newly planted native tea garden. 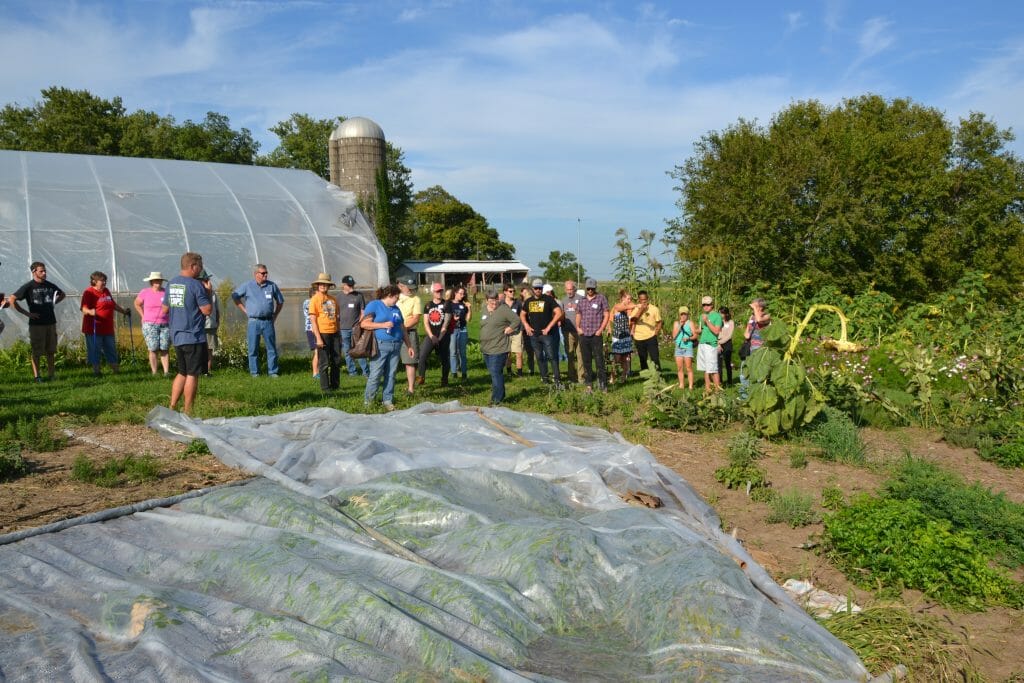 Xerces staff Sarah Foltz Jordan and Sarah Nizzi were also in attendance to provide technical expertise. Sarah Nizzi also shared information about cost-share and financial assistance opportunities for pollinator and beneficial insect habitat establishment, noting that most cost-share opportunities required some sort of agricultural history, but that there are options for non-production lands. 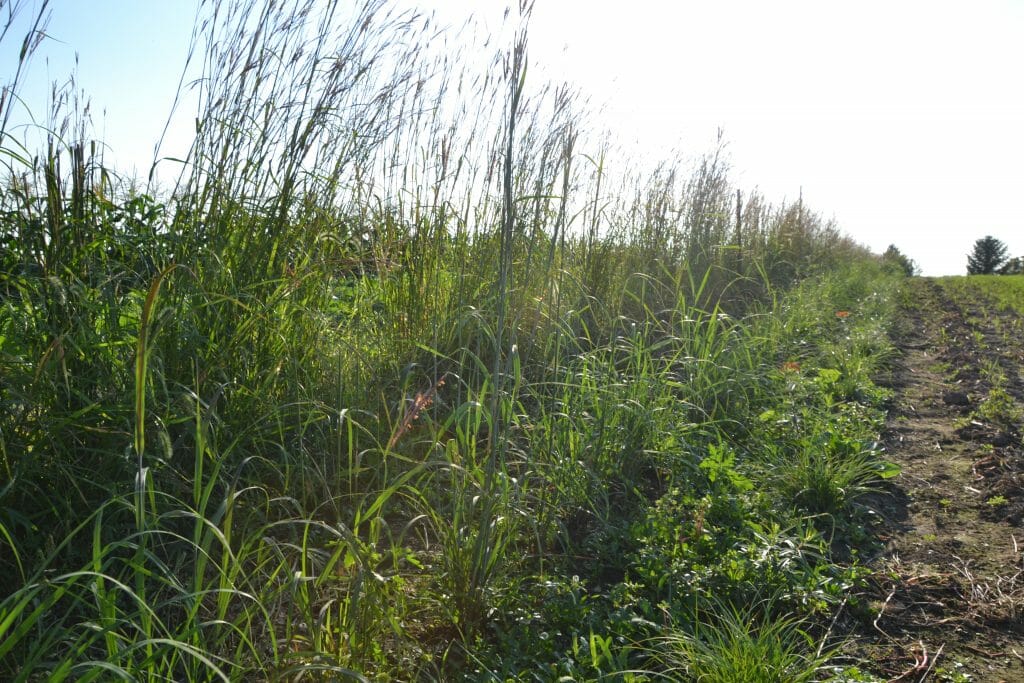 A beetle bank at Scattergood Friends School Farm; although difficult to see, the strip of habitat is mounded slightly to provide habitat for burrowing beetles.

During the event, Mark praised PFI and encouraged attendees to think about joining. “I can honestly say that being a member of Practical Farmers of Iowa has made me a better farmer,” Mark said, “but it’s also made me a better person.”