A Practice With Potential

Saturated buffers have the potential to address a significant challenge to water quality efforts on agricultural working lands: nitrate loading from subsurface drainage tiles. But despite their potential, saturated buffers have specific requirements and functions that don’t make them suitable for every farm.

Take a drive down U.S. 65 south of U.S. 20 near Iowa Falls, and you’ll see a sign for the Southfork Watershed Alliance’s (SFWA) Conservation Demonstration Farm. The farm is owned by family of PFI members Lindsay and Jacob Bolson. Lindsay’s mother, Mary Knutson, grew up on this farm and she and her husband Roger were able to purchase it several years ago. Active members of the Southfork Watershed Alliance, the family jumped at the chance to use the farm as a test bed for conservation practices designed to protect and enhance soil health and water quality. 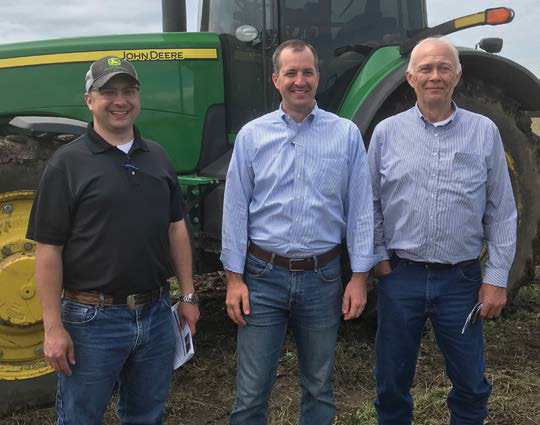 Using funds from a watershed grant and federal cost-share dollars, along with assistance from organizations like Iowa Soybean Association, Antares Group and Southfork Watershed Alliance, the farm is a unique example of conservation at work. Almost 130 acres, the property includes many different conservation practices ranging from blind tile inlets to filter socks to grassed waterways. The farm also includes two saturated buffers, a relatively new conservation practice that is gaining popularity across Iowa.

“The goal is to do the right thing for the property,” Jacob says. “It’s an investment, but there’s also sentimental value for the family and the land means a lot to Roger and Mary personally.” For Jacob’s family, the saturated buffer is just one more tool in the proverbial conservation tool belt.

“We learned pretty quick that there’s a lot of siting requirements for saturated buffers. You can’t do them willy-nilly wherever you like.” – Jacob Bolson

Why Use a Saturated Buffer?

Iowa’s farmland is some of the most fertile and productive in the world, but large portions of Iowa were historically too wet to farm. It is only in the last 150 years, with the advent of constructed drainage systems, that Iowa has become one of the most agriculturally productive areas in the world. But constructed drainage, while enabling enormous productivity, has drawbacks that require innovative solutions to address. This is especially true of subsurface drainage tile, which has altered the hydrodynamics of watersheds significantly. 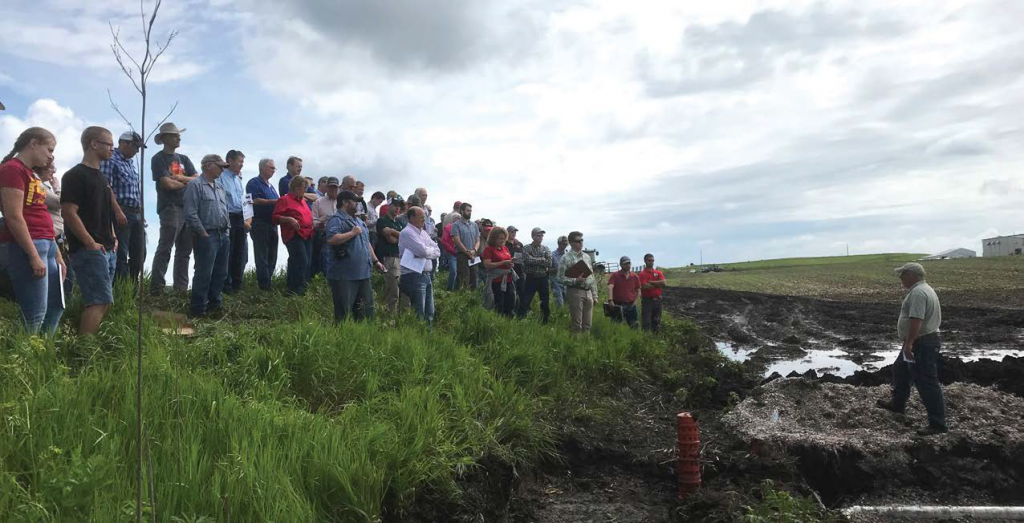 Guests gather to learn about installing a saturated buffer at the Southfork Watershed Alliance’s Conservation Demonstration Farm, owned by Mary and Roger Knutson near Iowa Falls.

Among other side effects, subsurface drainage tiling provides a quick and efficient transportation method for water-bound nitrate to leave the field. These nutrients inevitably find their way into Iowa’s streams, rivers and lakes and ultimately the Gulf of Mexico, where they contribute to algae blooms and the now-infamous dead zone where oxygen levels are too low for aquatic life to survive.

“Saturated buffers are a way to remove nitrate in drainage water by allowing that drainage water to interact with the soils – and the microbes living in that soil – within a stream-side or ditch-side buffer.”

What Is a Saturated Buffer?

On the surface, a saturated buffer looks much like any other riparian buffer: an area of perennially vegetated, unfarmed land bordering a waterway. If you look closely, however, you might see a little box sitting in the buffer strip, or maybe some flags or poles sticking out of the ground. Those would probably be your only external clues, Chris says; the real differences are below the surface. Where traditional tile drainage has an outlet that passes underneath the buffer and deposits directly into the waterway (you can often see these pipes protruding from streambanks across Iowa), the tile line leading into the saturated buffer is interrupted by a control box designed to redirect the flow of water. Instead of flowing through the tile outlet directly into the stream or ditch, water from the tile line is redirected into distribution lines running parallel to the waterway throughout the buffer strip. This lets water moving through the tiles seep into the buffer, where nitrate is filtered out into the soils.

Control boxes in saturated buffers are typically stop-log structures, which use a series of risers or bulkheads in a track to adjust water levels. Adding more stop logs raises the water level, forcing more water into the distribution laterals; removing stop logs lets more water bypass the distribution laterals and continue on uninterrupted to the waterway. Saturated buffers are always designed with overflows so that, in times of peak subsurface drainage flow, water can move freely out of the fields.

Although they are an innovative technology, buffers are not a one-size-fits-all solution to nitrate loading from drainage tile. “We learned pretty quick that there’s a lot of siting requirements for saturated buffers,” Jacob says. “You can’t do them willy-nilly wherever you’d like.”

According to Chris Hay, the first thing you need is an existing or planned buffer at least 30 feet wide, although wider is better. You also need soils with high organic matter – which in Iowa generally isn’t a problem – and soils without sand or gravel. The point is to hold water in the soil where it can be filtered by plants and microbes, so well-drained soils are counterproductive. Then there are the topographical requirements. Generally, you need to have a slope from the buffer back up into the field to prevent water from backing up into the drained area. Ideally, there should also be less than a 2% slope along the length of the buffer. While no single siting requirement is too strenuous, taken together these criteria can limit where saturated buffers can be installed on the landscape.

How Effective Are They?

Chris says the effectiveness of a saturated buffer largely depends on how much water can be delivered into the buffer: If the water can make its way through the distribution lines and into the soil of the buffer strip, then most (upwards of 90%) of nitrate will be filtered out. The reality is that the buffers can only hold so much water, especially during periods of peak rainfall. Thus, the soils in the buffer, the area that is being drained and the length of the distribution laterals are all factors that can influence the buffer’s efficacy.

Despite this limitation, saturated buffers are relatively cheap to install and generally require little maintenance – both advantanges compared with a practice like a bioreactor. Costs are limited to the control structure itself and the cost of installing the additional tile, Chris says. “With the right site, we can set the control structure and there’s really no maintenance required.”

Jacob advises farmers and landowners to do their due diligence and plan appropriately. He says getting buffers installed on his family’s farm involved a lot of coordination and buy-in from his wife’s family. They also worked with external partners, receiving significant financial and technical support from the Southfork Watershed Alliance and the NRCS. “Planning and design takes time,” Jacob says, “and sometimes a lot of time, especially when there’s cost-share and this many stakeholders involved.”

Jacob also encourages those thinking of installing a saturated buffer to use them as part of broader conservation efforts. On the Knutson farm, for instance, he says the family is using cover crops and taking highly erodible ground out of production – both in-field practices that also benefit soil health and water quality.

“It’s easy to know [a saturated buffer] is the right thing to do,” Jacob says. “But penciling it out in reality is much more difficult. That part takes help, time and patience.”

If you have a suitable site, however, and can work out the logistics, Chris says saturated buffers have the potential to be a powerful water quality tool. “As an edge-of-field practice it’s not really that expensive, and generally we can get it completely paid for some way or another,” he says. “If we can site a saturated buffer, then it’s a great way to address the nitrate coming out of the drainage tile that we otherwise wouldn’t have an easy way to address.”

A Look Back at PFI's 2019 Habitat Field Days