Larry and Ruth Neppl have valued PFI’s culture of sharing since 1988.

Larry and Ruth Neppl both graduated from Iowa State University in 1966 and married that July. Ruth’s career included working in the hospice office, doing development and fundraising for non-profits, and directing the Retired Senior Volunteer Program.

Larry taught high school vocational agriculture until he served in the Army and then joined Iowa Farms Associates, a farm management company, as a fieldman in 1970. He became president of the complany in 1983 and retired in 2000. The Neppls lived in the Fort Dodge area for much of their married life and moved to the Cedar Rapids area after retiring. 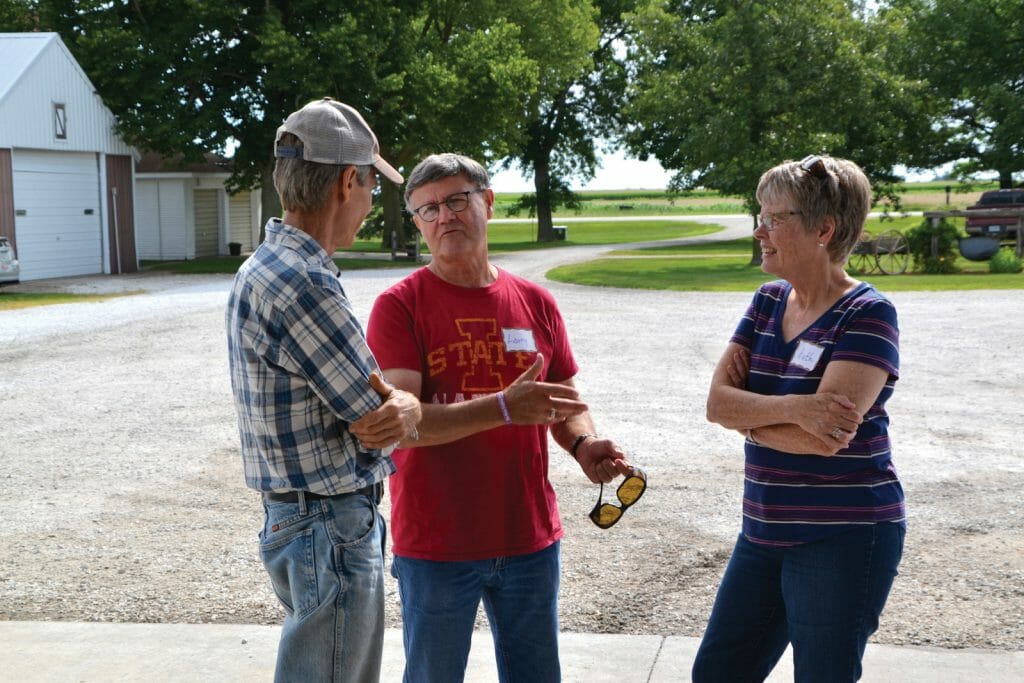 Kelly Blair, A.J. Blair’s father (left), speaks with Larry and Ruth Neppl during the PFI field day the Blairs hosted on their farm near Dayton in 2018.

The Neppls have been members of Practical Farmers since 1988. Larry is a firm believer in ridge-till, and says, “PFI in the early years was a lot of ridge-tillers.” Larry enjoyed learning from Dick Thompson and other early PFI ridge-till farmers, and he appreciated Dick’s philosophy on experimenting. “People at PFI are still carrying on Dick’s mission to continuously learn and share with others.”

Larry followed the research ISU agronomy professor Fred Blackmer was doing with PFI members. Many of the farms Larry managed at Iowa Farms Associates practiced ridge-till, and Larry conducted randomized replicated nitrate tests on these farms. “We were running about 120 pounds of nitrogen side-dressed on a lot of farms,” Larry says, “banding 30 pounds in the fall, coming back with 15-20 pounds on the planter and then side-dressing.” The spring nitrate test showed that most of those farms needed only 50-60 pounds of nitrogen, rather than the 120 pounds they had been applying. “That’s in line with what some of the very first PFI strip trials found, and we changed.”

Larry and Ruth went to a lot of early PFI annual conferences. “The thing that always impressed me about PFI is that most farmers are not necessarily willing to share what they are doing with others,” Larry says. “They get in their pickup and drive around the neighborhood to see what others are doing. PFI opened up a whole new avenue of farmers willing to share, work together and learn.”

Larry and Ruth started going to Arizona to spend January and February in a warmer climate, but recently stayed in Iowa and attended the last two conferences after a long sabbatical. “It’s blossomed,” he says of how PFI and the annual conference have grown. “I am amazed at how broad it has become. It is great to see the open sharing of ideas among such a diverse group of farmers.”

“The thing that impressed me about PFI is that most farmers are not necessarily willing to share what they are doing with others . . . . PFI opened up a whole new avenue of farmers willing to share, work together and learn.” – Larry Neppl

While less present at events, Larry still follows Practical Farmers closely. “The magazine is much improved over what it used to be,” he says. “I read nearly all of it when we receive it.” He feels PFI continues to evolve to meet the challenges of the future. “The focus on farmers sharing and learning together is really valuable. It’s not available any other place that I know of.” Larry praises the leadership of many of the early members and feels confident the organization has retained good leadership through the years. He recommends field days, saying attending them is especially valuable to see what people are doing on their farms and having the opportunity to ask direct questions.

“Practical Farmers are people who want to learn,” Larry says, adding that he appreciates how yield isn’t the sole measure of success for many PFI’ers. “For so many in the ag industry, their goal is high yield. The goal should be maximum net return because that’s the true measure of what will keep you able to farm.”

During that field day, Larry, Ruth and the other guests had a chance to see the Blairs’ rye field that was baled earlier in the year, as well as the mobile water tank the Blairs use for their cows. Larry and Ruth terminated the lease held by other tenants on their Fort Dodge farm and rented that land to the Blairs because they knew the Blairs would be willing to try practices like cover crops.

Larry is passionate about conservation, and has strong feelings about fall tillage and fall nitrogen application. “The amount of nitrate going into the Gulf of Mexico from Iowa is increasing because the soil is exposed,” he says. Larry has written numerous letters to The Gazette, the Cedar Rapids newspaper, and various farm magazines about farming, conservation and water quality.

Larry and Ruth own two small farms, one at Emmetsburg where Ruth grew up and one south of Fort Dodge. In 2015, Ruth and Larry didn’t have a lot of success getting the tenants interested in cover crops, no-till or strip-till, which both farms are now practicing. They terminated the lease and rented the Fort Dodge farm to fellow PFI members A.J. and Kellie Blair. “I knew A.J. as a little kid,” Larry says. “His dad rented from me and was a ridge-tiller and innovator. When we wanted to make a change, we knew they would be willing to try new things.”

Larry and Ruth attended the Blair family’s field day in 2018 and were able to hear more about the conservation practices they employ.
Larry and Ruth have graciously included Practical Farmers in their will – and they appreciate PFI’s message of inclusivity in agriculture. “We believe in what Practical Farmers has done over the years, and like where they’re going,” Larry says. “We’d like to be able to perpetuate the good work PFI is doing.

“It seems like for the past 20 or more years, it has been ‘get big or get out’ in agriculture. Practical Farmers has shown that this is not necessarily a good philosophy, or the answer for everyone. There are many ways to farm and be viable.”

Farming for the Future