By Rebecca Clay and Sarah Carlson

The crop destruction of last week’s derecho hindered many farmers’ fall harvest and cover crop plans. This fall will be especially busy and stressful—with farmers scurrying to drive the combine, tender grain carts, apply manure and conduct general fall field work—which is why it is important to prioritize seeding cover crops now. 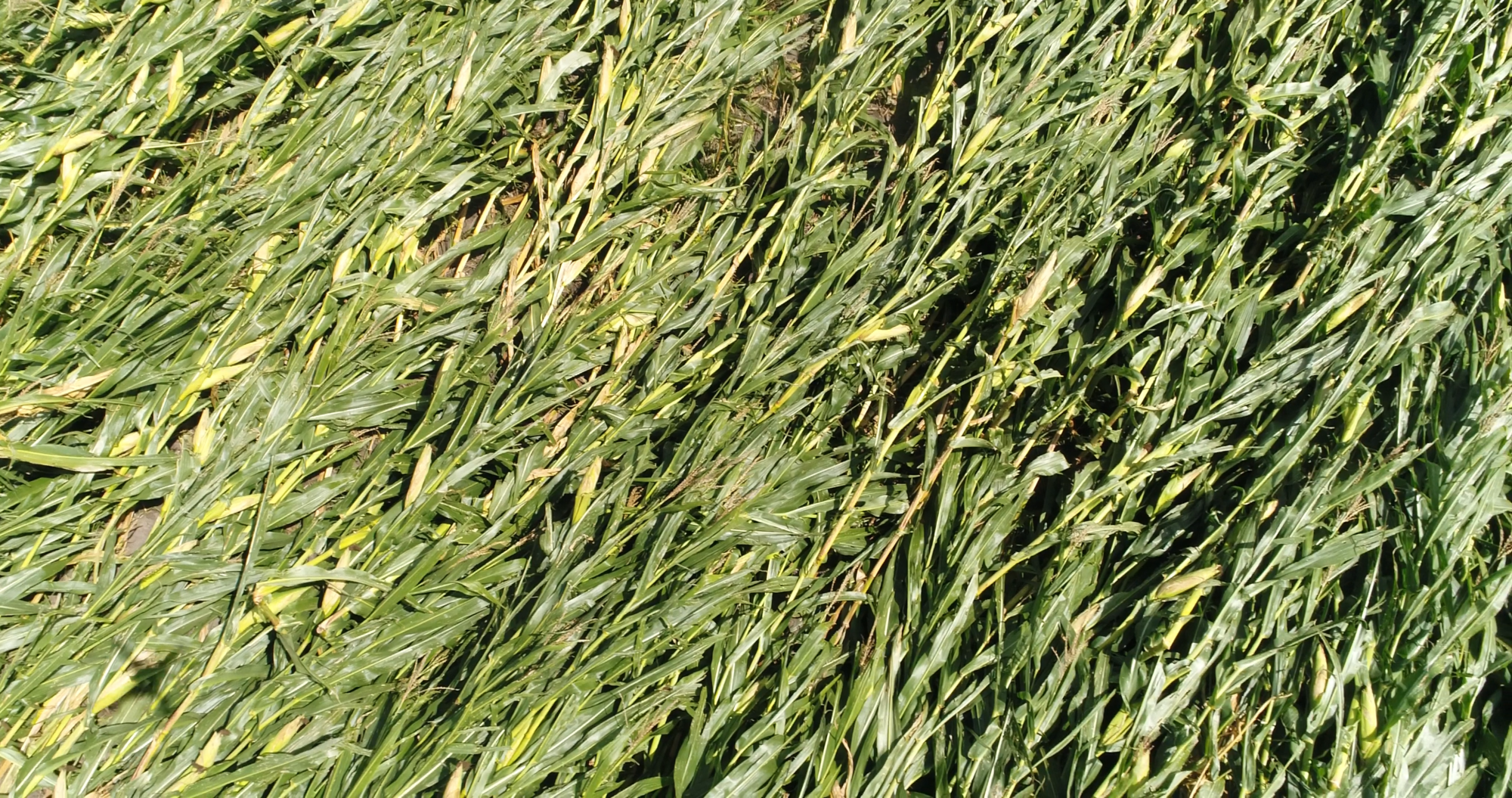 Getting the cover crop established will be especially important this fall for two reasons: First, due to this year’s drought conditions, nitrogen uptake by crops is less than it would be under typical moisture conditions. Next spring Iowa could have a huge pulse of nitrogen leaving our fields, rendering that nitrogen unavailable to future crops. We experienced a similar nitrate pulse in 2013 following the 2012 drought.

The second reason benefits next year’s crop more directly: cereal rye controls weeds including volunteer corn. The presence of cereal rye reduces germination of weed and volunteer corn seed and competes with them for light and nutrients. Weeds end up being smaller and easier to manage.

Fields that produce viable grain but are difficult to harvest will have volunteer corn in next year’s soybeans. Cover crops can help! Aerially seeding cover crops now relieves the pressure to seed later this fall when farmers are busier.

Farmers and cover crop businesses reached out to ask how well cover crop seed would pass through damaged corn to reach the soil. To evaluate whether seed could get through damaged corn canopy, Practical Farmers conducted a demonstration using Rantizo’s cover crop drone. This drone has a hopper that can hold about 15 pounds of cereal rye seed and is usually used for small seeding projects—perfect for testing aerial seed distribution on a small area of a field. Tim Couser of Nevada, IA selected a field north of his family’s home farm that had varying levels of downed and damaged corn and would act as our test site. 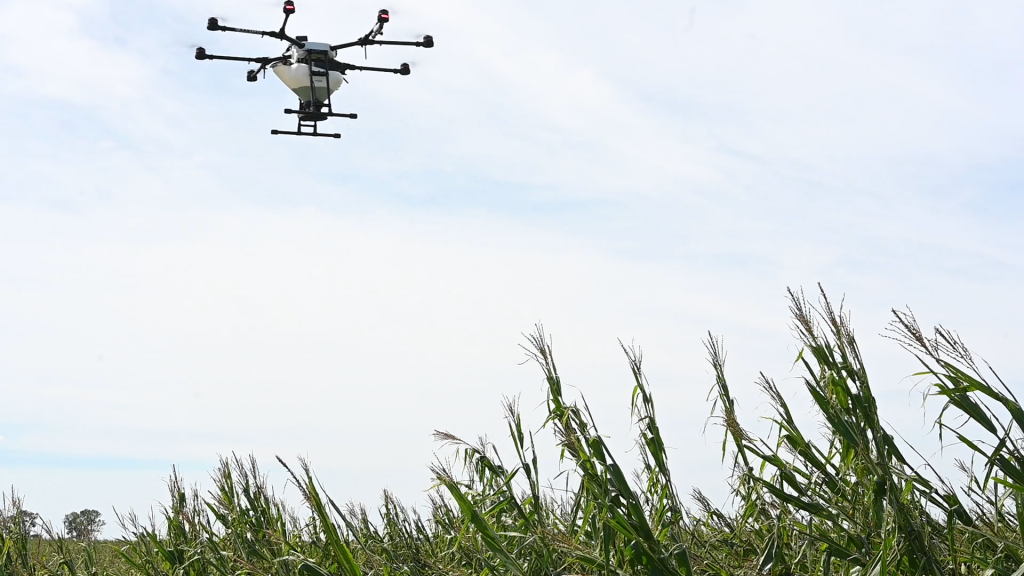 Bill Frederick from Iowa Cover Crop donated the cereal rye seed, and Meaghan Anderson from Iowa State University assisted in experiment design. The corn rows were at 20-inch spacing with a 32,000 plants per acre population. More light was passing through than we thought in the areas of the field with severely lodged plants. 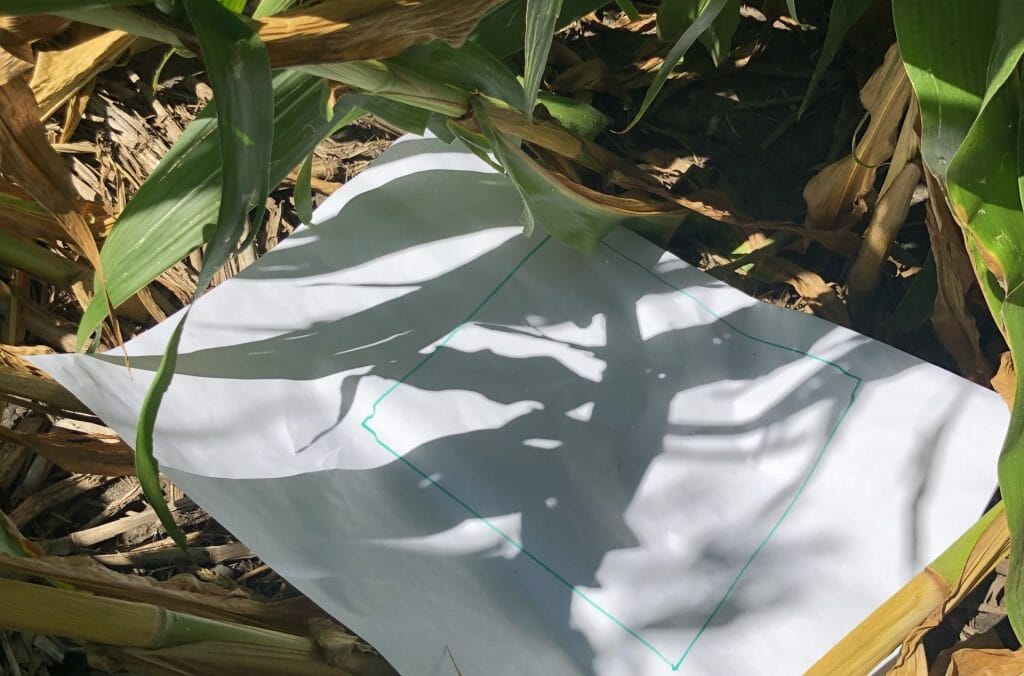 More light was coming through the canopy than we had thought.

Details of the Demonstration

Prior to drone-seeding we scouted areas of the damaged cornfield which would serve as different treatments:

We calibrated the drone to seed a rate of 55 pounds per acre or 21 seeds per square foot. We then applied the seed over the treatments and counted the seeds in the 1-foot square areas to see how much seed reached the ground.

The drone-seeding of cover crops into the damaged corn came out better than we expected. Observations are listed below: 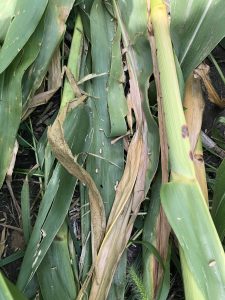 Treatment 2: About a quarter of cereal rye seed was caught on the corn leaves and in the whorl, while the three-quarters passed through to the soil. 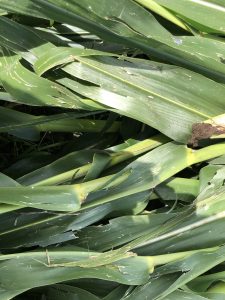 Treatment 3: Some of the cereal rye cover crop seed remained on top of downed corn leaves, but most reached the soil surface.

After evaluating this field with these various damaged corn treatments, it looks like aerial seeding will work unless a field has most of its corn leaves touching the ground, resulting in seed interception. If farmers can harvest their corn, then an aerial seeded cover crop should work. However, they should still consider other factors which lead to success in aerially seeding including adequate moisture.

If a field is too damaged for combine harvest, then farmers might consider running a stalk chopper over the damaged area, then following up with a vertical tillage pass to prepare the field for soybeans the following spring. A seeder mounted on the vertical tillage implement would minimize the additional cover crop seeding expense.

How are Other Farmers Planning to use Cover Crops this Fall? 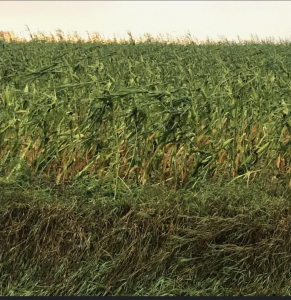 Some of Ryan Tiefenthaler’s corn has less than a quarter of its 33,000 plant population intact after the derecho. This will be harvested for silage then planted to a cereal rye cover crop.

Ryan Tiefenthaler of Breda, IA experienced hail damage on many of his fields, with some 100 acres of corn having less than a quarter of the original corn population standing after the storm. Ryan has worked with his adjuster to establish check strips across the field and has chopped the majority of the field for silage.

He says, “We want to get out there before mold becomes a problem and before the corn dries down too much.” So many ears were downed that he will likely rake and bale the remaining downed corn after chopping. On this field, he will either drill or spread cereal rye with the goal of getting ample biomass ahead of his soybeans next year.

Ryan is still working with his adjustor and soybean purchasers to decide what to do with his severely hail-damaged soybean fields. If he can get in early enough, he will seed these fields with a legume/brassica mix, or if he seeds later, a triticale cover crop.

Sam Spellman of Woodward, IA farms in one of the areas in the state which experienced above 100 mph wind gusts. About 35 percent of his corn is lying flat, of which some has snapped at the root. He is expecting poor kernel quality, low test weight and low-yielding corn in these fields, which he might take to harvest depending on what his adjuster says.

Amidst much uncertainty, Sam was finalizing his cover crop plans this week. “I’ll either fly rye onto my soybeans like usual—or—because of the dry conditions from drought, I might wait until after harvest and seed using my fertilizer buggy. I have two fields without too much downed corn that I’ll still fly my cover crop seed on.” 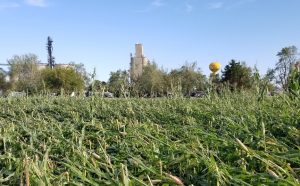 Randy Miller of Ankeny, IA experienced some kinked corn and lost a grain bin in the storm. He isn’t sure what his crop insurance adjuster will do with the kinked corn, but Randy has decided that he can and will still fly on cover crops into his standing soybeans.

We’ve been dealt quite a few lemons in 2020. Looking to 2021, we will need to make adjustments to ensure spring planting goes well. Let’s make lemonade from these lemons and use cover crops as a tool to protect losses of soil nitrogen and control weeds next spring.

Cereal Rye for Weed Management: A New Tool in the Toolbox?