Bill Frederick and his father liked having a three-crop rotation with cover but did not have a solid market for their third crop—wheat and oats. When they began peddling their wheat and oats to their neighbors as cover crop seed, they called on a local guy with a mobile seed cleaning business to clean wheat seed for them, but they soon realized they wanted to scale up.

Today Bill and business partner James Holz operate Iowa Cover Crop, a custom seeding and seed business out of Jefferson, Iowa, with seed cleaning as an essential prong of their business. They grow and purchase from neighbors oats, wheat and rye, and sell cover crop seed to co-ops, retailers and individuals. They have progressed from hiring their seed cleaning out to now leasing a seed cleaning facility, with many lessons learned along the way. On our January shared learning call, Bill shared some lessons he has learned from several years of cleaning cover crop seed.

Why Clean Your Own Seed?

Bill found that purchased cover crop seed varied in quality—sometimes germination would be low, or there would high levels of inert material or weed seed. Likewise, in years when the seed supply is low, “you didn’t have as much control when you’re dealing with another party to get it cleaned… We decided to get some seed cleaners to be a bit more autonomous and have more control over our seed supply,” explains Bill.

Cleaning their own seed provides some autonomy and more control over the quality of the seed Iowa Cover Crops sells.

The financial case for cleaning their own seed was also apparent to Bill. He thought, “Why pay somebody else to clean the seed for us, pay that $0.50 to $1.50 per bushel to get the seed cleaned or purchase already cleaned seed when we could capture that ourselves.” 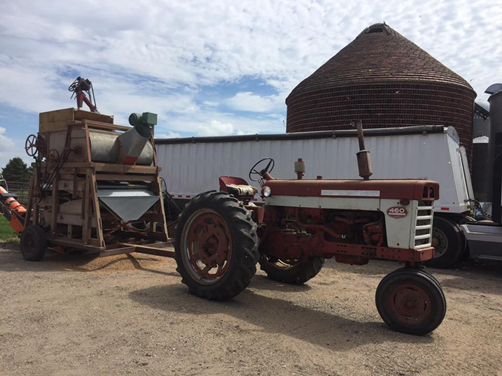 Up until a couple years ago Iowa Cover Crop used a 1950s Clipper seed cleaner to clean seed.

When Bill decided to get into seed cleaning, he purchased two 1950s Clippers: a 228D and 218D, via an online auction. The two wooden, single screen seed cleaners functioned as “scalpers” or “stationary combines” with two shaker screens and a suction fan. The design is nearly the same as modern seed cleaners, but the older machines require additional maintenance. Bill originally invested $4,500 or so per cleaner with the caveat that he had to replace a motor and some wood parts. Bill advises anyone looking to purchase an old cleaner to look for a name-brand cleaner like a Clipper or Crippen, since replacement screens for these types of cleaners are more abundant. The cleaner set-up was temporary, with Parker wagons with augers to feed the seed into the corn crib-housed cleaner.

A couple years later, Bill purchased a GCS screenless cleaner at the Farm and Power Show. The cleaner separates grain by density instead of using screens, and Bill found it convenient to not have to think about screen size for each seed type. Bill and James were still using a portable set-up, however, which they found inconvenient when they started to clean larger quantities. It was time to scale up.

You can see Iowa Cover Crop’s GCS screenless cleaner in this video.

A neighbor had a seed cleaning facility with a Cimbria four screen, top and bottom air cleaner, and they asked the neighbor to do custom seed cleaning. When the neighbor was ready to retire, and Bill and James were ready to expand into more professional packaging, they began to lease the entire facility. They have a gravity table for the rye to separate different densities of rye, and a length separator for the oats to remove odd-sized oats; these additional steps improve the seed quality substantially. The facility enables them to automate the bagging process for bags and totes and it even has a robotic palletizer. With the current set-up, they can clean 250-300 bushels per hour with high quality seed. One of the biggest benefits of using a permanent, indoor cleaning facility is that they no longer have to move augers or other equipment when it rains.

Iowa Cover Crop’s current seed cleaning set up has permanent infrastructure and a much higher capacity.

Thinking About the Set-Up of a Seed Cleaning System

Bill says that if you are processing over 10,000 bushels, it is probably best to have an indoor, permanent set-up so you do not have to move the cleaner set-up inside when it rains. It can be taxing in July and August to have to move the wagons, augers and trucks.

With Iowa Cover Crop’s old seed cleaning set-up there was a lot of moving of augers while cleaning.

Get Clean Seed from the Start

The seed cleaning facility that Iowa Cover Crop now leases came with some advice from the owner/former operator: “If you bring crap in, you’re going to have crap going out.” Bill recommends that you identify who is selling you good seed and avoid the people who are trying to save each last kernel or bringing a lot of trash in. Bill says, “If you’re going to start cleaning seed, get to know the people who are going to be growing seed for you.” He will even make agronomic and combine setting recommendations and to growers to procure high quality seed.

So far, they have not rejected loads, but they will dock prices on trashy seed. Bill explains the financial logic as: If you purchased an uncleaned bushel of rye at $8, and clean out 2% inert matter or weed seed on, the per bushel price of pure seed calculates to $8.16. If you have to clean out 10% inert matter and weed seed, the pure bushel price of pure seed calculates to $8.88. Bill pays a premium price for higher quality seed.

Bill advised to make sure you are selling seed legally by getting seed tested via a certified lab and not selling proprietary seed. You can learn more about the legality of selling seed in this blog post.