Alfalfa as a Staple in Rotation and Pasture

Alfalfa offers a double benefit to any diversified ruminant livestock operation due to its nitrogen fixation potential and use as a feed source. In the most recent shared learning call, John Schulte shared how alfalfa, which has become a staple in his rotation and pasture, helps keep living roots on his land year-round.

“In everything that we do, keeping the soil in place is the primary focus, whether we’re grazing or supplying feed for the dairy,” says John. 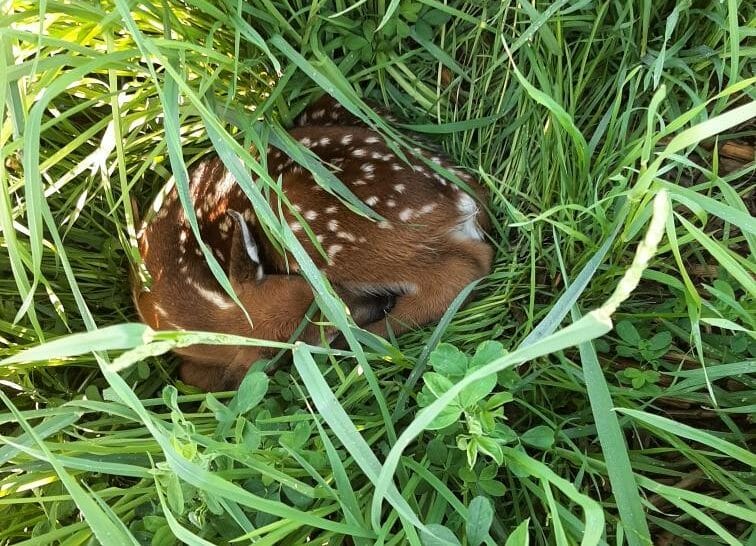 A fawn nesting in a field that was interseeded in early May, 2021.

Alfalfa as a Feed Source

John farms with his two sons across their three distinct operations in Norway, IA. The operations consist of a 170-cow dairy, a beef cattle herd and farrow-to-finish pigs. Across the roughly 700 acres that John farms, every crop grown is used for animal feed.

While legumes can present challenges to some producers (e.g. bloating), John trusts the cattle to adapt and regulate themselves through epigenetics. His herd feeds on alfalfa for most of the year and performs well with no bloat. John mitigates the risk of bloating by turning cattle out to pasture in the mid-day when there is little frost or moisture present. The cattle are also fed prior to being turned out, so that they do not overeat. 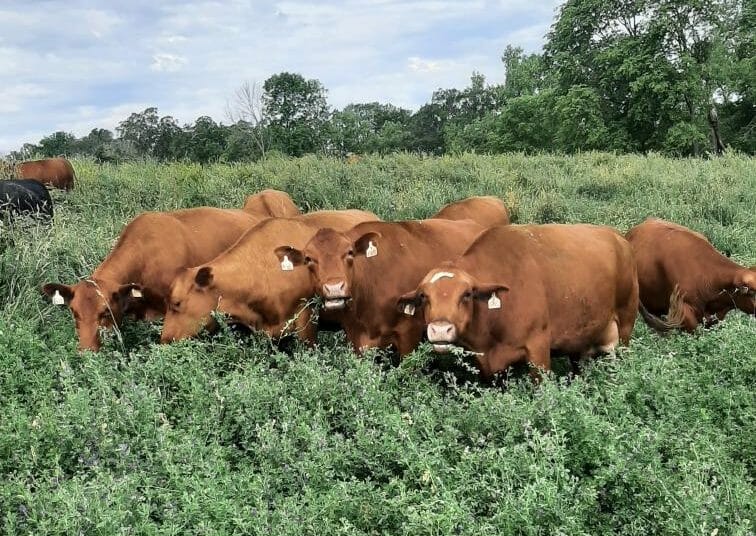 Maintaining proper soil pH (between 6.8 – 7.0) is critical in successfully establishing an alfalfa crop. Though John does not soil test, he recommends it to those unsure of their soil conditions. John warns that low pH levels make alfalfa more prone to disease. He recommends investing in lime, as it is a low cost input with significant returns.

When it comes to stand and seeding rates, John refers to Iowa State Extension recommendations. In a seeding year, aiming for 55 stems per square foot or, in a first-year stand, 15-18 plants per square foot is the goal. With an older stand, 55 stems can be achieved with 4-5 plants. John recommends seeding at five pounds per acre to achieve this goal.

John has experimented with many establishment methods through multiple pasture renovations. His preferred choice for seeding is using a land roller, drilling seed in at a ¼ inch depth then land rolling once more. John plants his alfalfa with a Great Plains 15 foot no-till drill with press wheels (which help aid with placement). He suggests using a cultipacker or an end-gate seeder if you do not have access to a land roller.

John advises re-seeding within the same year to improve poor stands. If seeded in the fall, the field can be re-seeded in the spring. He warns against seeding a year later because the autotoxicity of the established plants will reduce germination and growth of new seed. If replanting a field back to alfalfa, John suggests waiting a year after terminating the current stand.

Making it Work in Rotation

John and his sons have made alfalfa a central part of their crop rotation. At their dairy farm, alfalfa is left in production for three years, then injected with manure after the final cutting. Afterwards, a cereal rye cover crop is seeded in the fall, chopped and bagged in the spring, then strip-tilled in preparation for corn to be planted into green rye. A new alfalfa seeding will be vertically tilled, rolled, planted, then rolled once more.

For nurse crops, John uses multiple species and mixes including triticale, peas, clover, teff and sorghum. He recommends having more than one species as it offers insurance that something will succeed. Alfalfa is a tough crop, but he advises that it should not be “smothered” with a nurse crop. If soil fertility is adequate, John suggests keeping fertility inputs for the nurse crop low as to limit its growth.

John is a believer in alfalfa’s benefits and encourages others to adopt it into their rotations. By including it in his rotation, he has seen increased porosity and water retention on his farm. Alfalfa can offer multiple benefits to your land while serving as a high quality feedstuff for cattle and grazing systems. 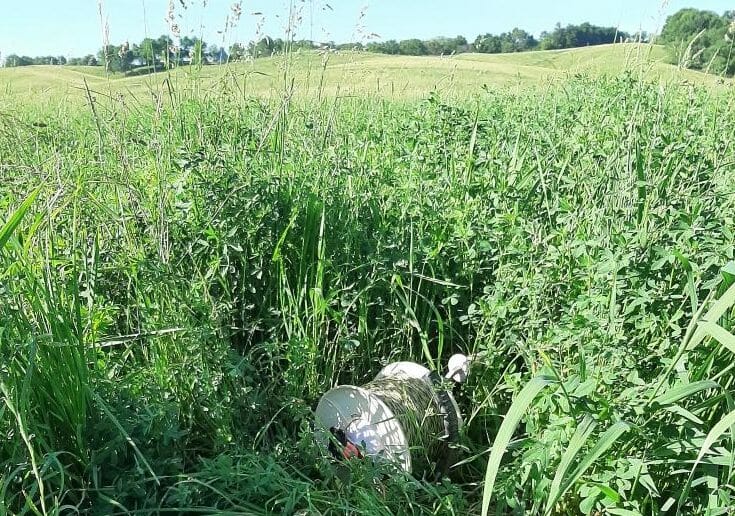 One of John’s fields 30 days since being grazed.

Interested in learning more about small grains? Join future shared learning calls and get resources on small grain production delivered straight to your inbox by signing up for our monthly small grains newsletter to get details sent directly to your inbox.”

Maximizing Forage Production with Summer Annuals in an Extended Rotation