Hybrid rye can be a positive addition to both organic and conventional farming operations, growing in popularity due to its higher yield, disease resistance and weed control properties. A recent article, shared by the Land Stewardship Project, highlights how hybrid rye can improve production systems.

Jude has been passionate about small grains throughout his farming career. However, he experienced difficulties with weed pressure, poor stand, winter viability and vomitoxin content with some of the small grain species he tried. After attending a PFI field day and learning about hybrid rye, he planted 20 acres in 2017 for harvest in 2018. It was the best small grains crop grown on his farm and he began to prioritize incorporating it in his operation. 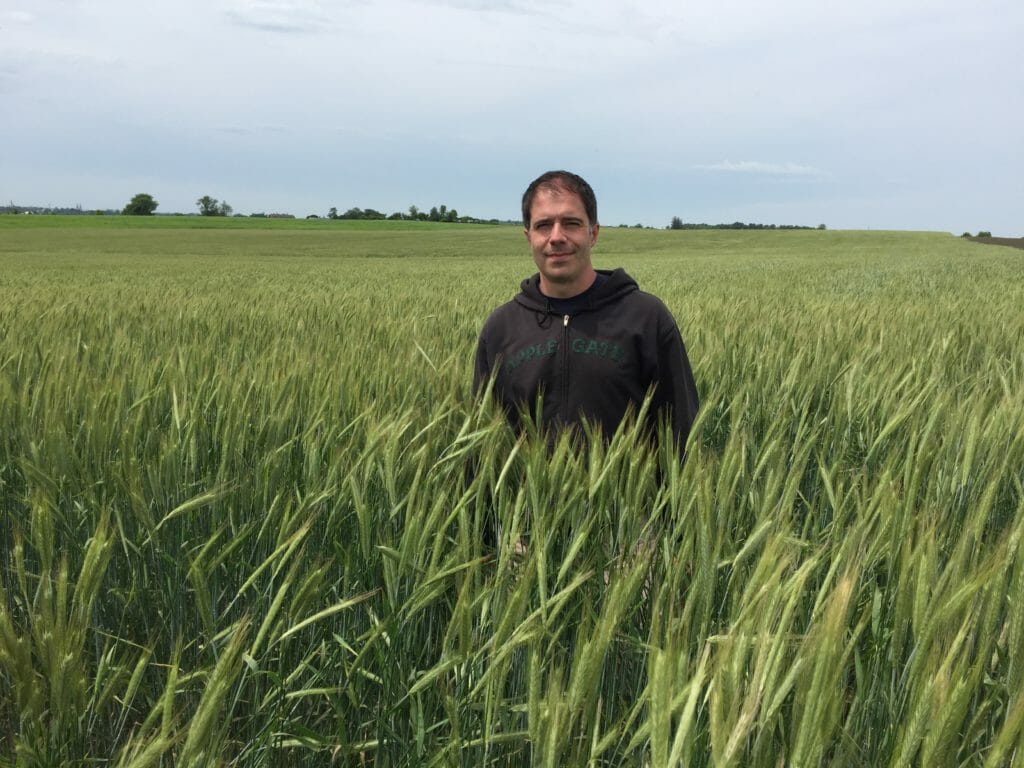 Jude standing in the field of his first hybrid rye crop in 2018.

Jude raises both the KWS Brasetto and KWS Bono hybrid rye varieties. He recommends talking with your seed dealer to determine which variety is best for you and ordering ahead of time. If you would like to learn more about rye varieties and their performance, check out our Cereal Rye Variety Trial.

Hybrid rye can work with a variety of soil and tillage programs; Jude has experimented with both plowing and disking prior to drilling hybrid cereal rye. For seeding, Jude recommends 800,000 seeds per acre and to ensure your grain drill is calibrated correctly. Jude uses a John Deere 450 grain drill with double disc openers to aid in more accurate seed placement; his seed depth is ¾ to 1-inch deep. It’s also important to plant the crop on time; Jude targets mid-September before heavy fall rains arrive.

Jude advises, ”Focus on planting hybrid rye like you’re raising corn or soybeans. Get the land level and fine-textured. Treating this like you’re seeding a cover crop, like oats to alfalfa for example, would be a mistake and result in poor stand.” 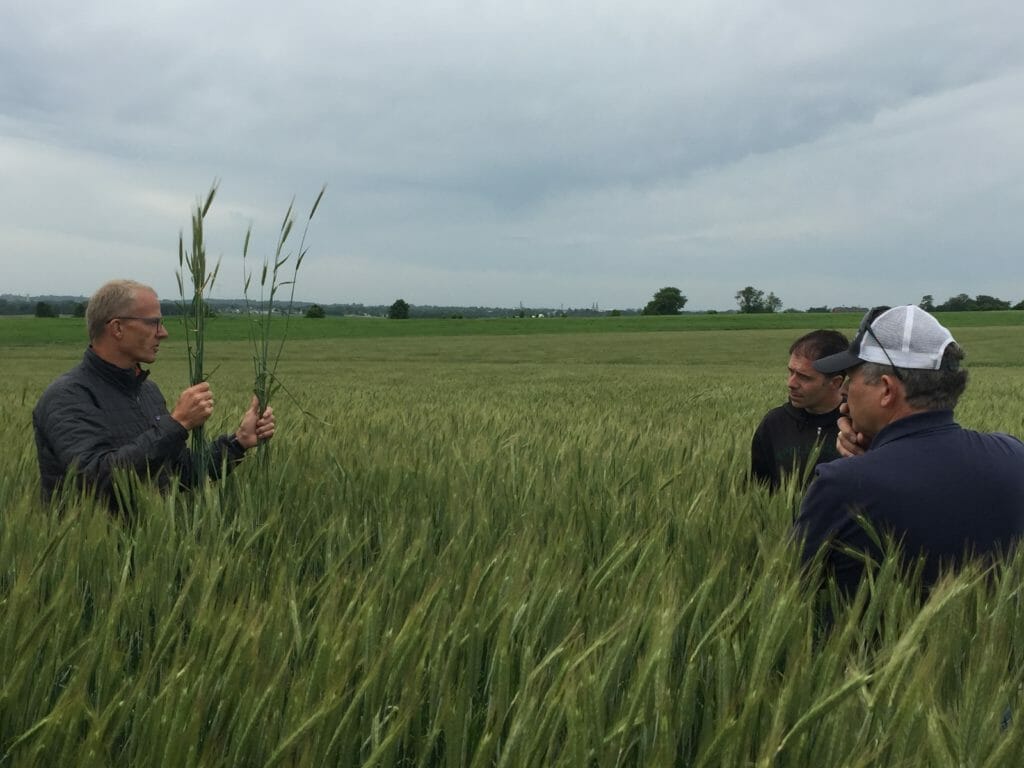 This year, Jude will direct combine his hybrid rye crop, though in previous years he has windrow harvested. Windrow harvesting should be done with some caution, as it can lead to loss of rye. Additionally, weed resistance will end when the rye crop dies and aggressive weed growth may necessitate a second round of windrowing. Jude recommends leaving 6-inch stubble if windrowing the rye crop. He also stresses the importance of adequate grain storage. His rye is generally 17-18% moisture and maintains quality best when stored in a large bin with a fan as it is critical to have some ventilation on high-moisture rye.

Jude uses the newest model of an Art’s Way mixer mill with a 3/16 screen to grind the rye for his pig rations. While it does grind a little harder than corn or beans, he has had no issues using this equipment. Jude began incorporating rye into his rations incrementally, starting with only a few hundred lbs/ton. He recommends observing animal health and rate of gain while gradually increasing rye inclusion rate. He hasn’t observed any rejection or palatability issues in his pigs. To learn more about including hybrid rye in pig rations, check out this PFI research report and blog.

Hybrid rye is included in all five pig diets on Jude’s farm as follows:

The rye is balanced with corn, soybean meal, soybean oil and vitamins and minerals. Jude can see the benefits of incorporating rye into his ration including increased regularity in animal blood sugar levels, calmer animals, the additional protein added to the ration, the same or comparable test weights to corn and financial viability.

Additionally, the rye straw is used in nesting boxes and hoop barns. While rye straw is not as preferable as oat or barley straw, Jude has had no issues with its coarseness when used in farrowing huts. 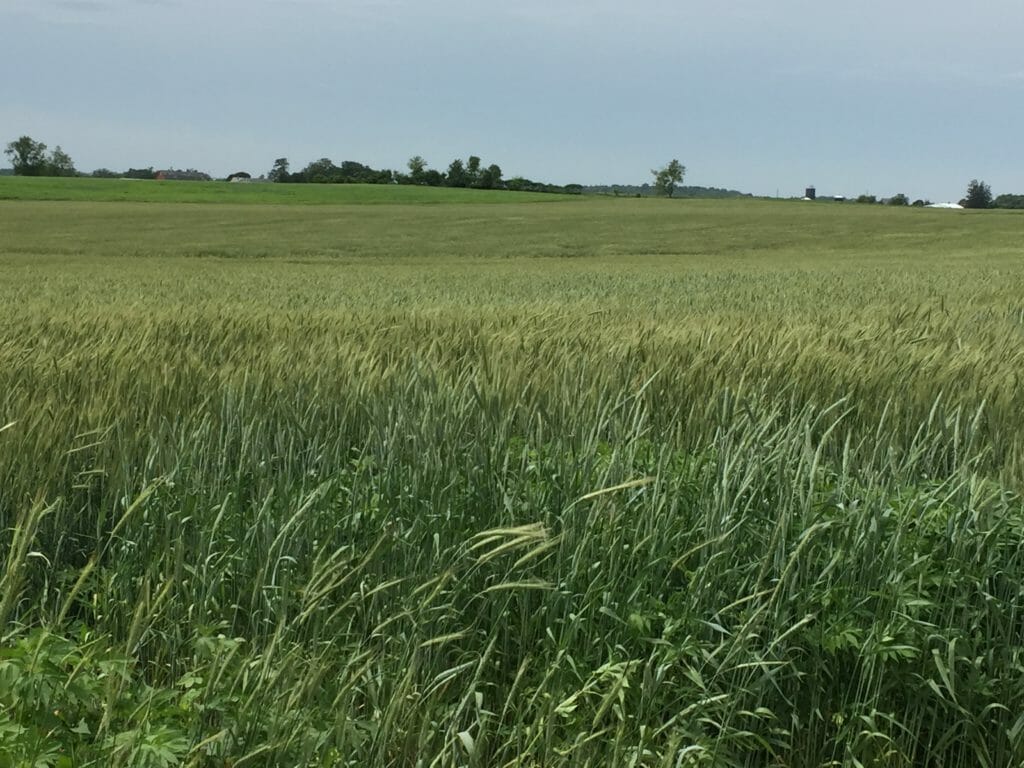 “I would be further ahead financially than I am now if I had grown rye for years,” says Jude. He is now considering a rye-centric rotation on certain parts of his farm. With a 100 bushel/acre yield plus straw bedding, hybrid rye can compete with the average long-term results of Jude’s previous corn crops. He is a believer in hybrid rye as it has served as a financially viable crop, feedstuff and bedding source and encourages others to include it in their rotation.