Mark Quee, the farm manager at Scattergood Farm, stared out over his pollinator habitat on a warm day in late June. The golden Alexanders are in full bloom and the long strips of prairie are a vibrant pastiche of dark green, yellow and purple against the rows of vegetables.

“Every day I walk out to the farm, and along our main path is our pollinator palooza mix,” Mark says. “Every week it’s different and beautiful, and it’s really fun to watch it change year to year, as well as week to week.” 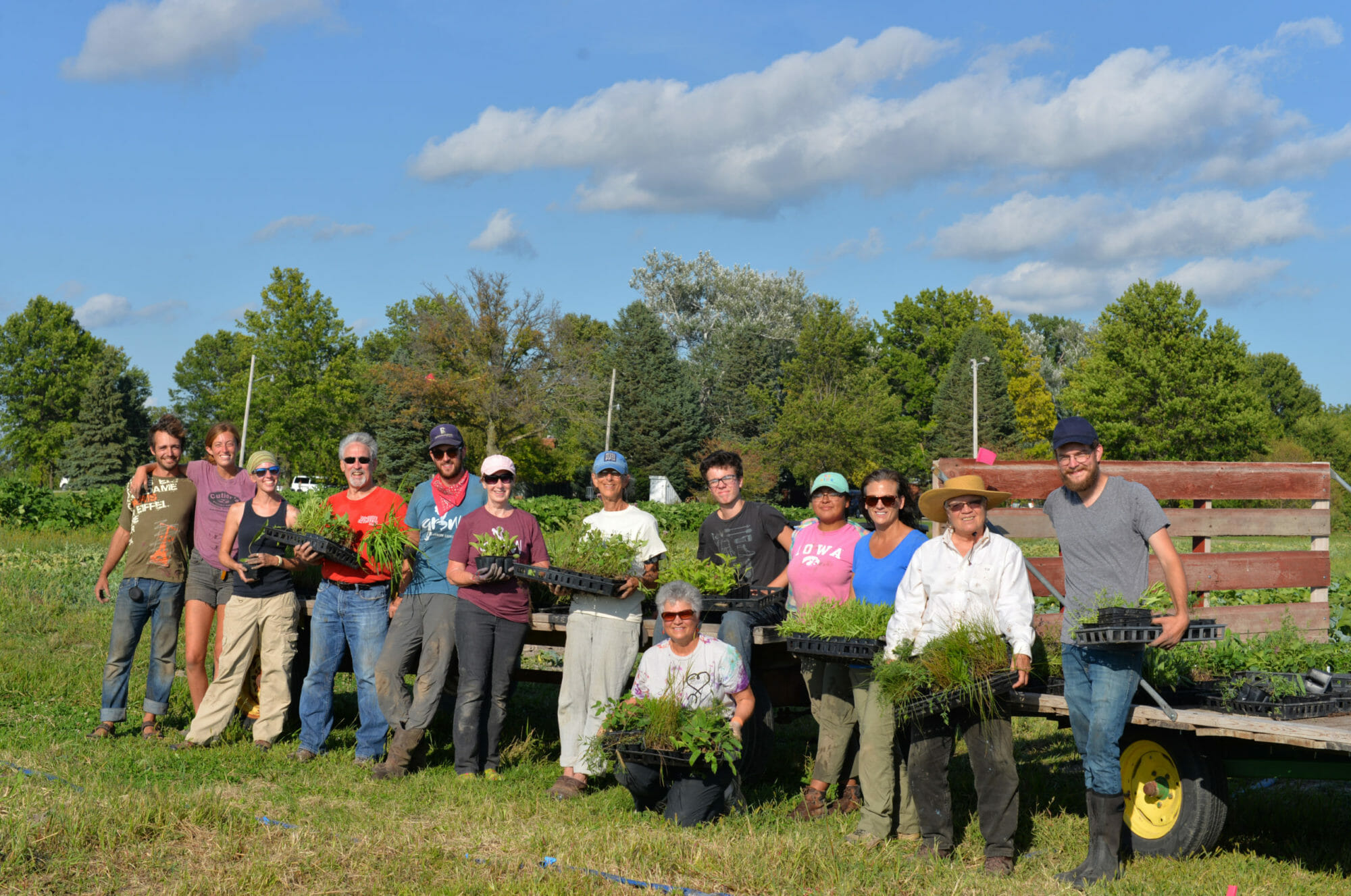 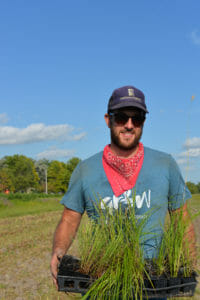 Jake Kundert, the former food systems director at Grow: Johnson County, also has robust pollinator habitat that hums with bumblebees and other pollinators. Sitting in front of the beetle banks at the Johnson County Historic Poor Farm, where Grow: Johnson County is based, he reflects on the benefits this habitat has provided. “The farm is much better because of having this environment where insects are able to thrive,” Jake says.

Jake and Mark both have multiple, expansive prairie areas that attract beneficial insects, help with pest prevention in crop fields, keep soil on their land, significantly improve their operations and make the places they farm beautiful.

They could not have created these spaces, however, without the help of many volunteers and partners, including Xerces Society volunteers, Scattergood students, Grow: Johnson County staff and others. The planting process took days, and the growing and managing took years, but the prairie has benefitted Jake’s and Mark’s communities and their farms in many ways.

To establish their habitat areas, both farmers used Prairie Moon Nursery’s Pollinator Palooza mix, taking underperforming acres and field edges out of production. Doing this decreased the costs of planting future cash crops. Average yield also improved, since lower-producing acres drag down calculations of a field’s average output. Plus, as horticulture farmers, they gained more pollinators to help their vegetable crops and balance out the pest insects.

For Jake, the decision to plant beetle banks stemmed from a problem with Colorado potato beetles. Many potato farmers in Iowa and beyond deal with these small yet voracious beetles, which pose a significant threat to potato crops. The beetles can produce three generations per year, and one unchecked adult beetle can lead to droves of hungry beetle offspring eating the leaves of potato plants.

“They go out and can demolish a field really quickly, to the point you walk out there and it looks like some green stems sticking out of the ground,” Jake says. Without leaf material for the plant to photosynthesize, the potato underground fails to thrive, reducing yield.

To avoid this fate, Jake had tried walking the rows of potatoes to find the beetles and kill them individually. This job was both labor-intensive and unpleasant, and the method meant he invariably missed some beetles. Seeking a better approach, Jake decided to try planting beetle banks – something he was inspired to do after attending a 2018 PFI field day at Andy and Melissa Dunham’s Grinnell Heritage Farm.

“Andy came up on this one spot on the farm and said, ‘These are beetle banks, and since we’ve installed them, we haven’t had to spray for potato beetles anymore.’ That set the lightbulb off in my mind,” Jake says. After some more research, he discovered why the Dunhams no longer needed to spray: predatory ground beetles, which feed on potato beetles and keep the population in check. 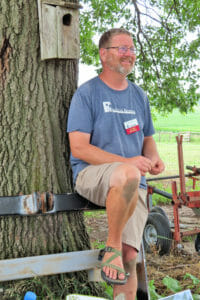 The impetus for adding prairie at Scattergood began with a half-acre patch on a steep, erosion-prone slope. After big rains, Mark found it “soul-crushing” to see the amount of soil washed into the nearby path. After years of trying to grow vegetables on the patch, Mark conducted two PFI field crop trials, which stabilized the soil through reduced tillage. But he hesitated to keep farming that land.

Scattergood’s former biology teacher, Mike Severino, was actually the first to plant prairie at Scattergood. For that half-acre piece of steep slope, Mike had applied for and received a Sustainable Agriculture Research & Education (SARE) grant to seed it with Minnesota Native Landscape’s Pollinator Mix. The first seeds of that prairie patch were planted in 2014.

“It’s just been the very best thing we’ve ever done,” Mark says. “The prairie plants have really stabilized that hillside, encourage lots of diverse insect life and it’s just beautiful.” The success of that first prairie planting inspired Mark to plant more prairie and pollinator habitat whenever he discovered more unproductive parts of the school’s land.

Once Jake Kundert decided to plant the beetle banks at Grow: Johnson County, he began to involve his community. He ordered more than 2,000 native prairie plugs, or container-grown prairie plants, from Minnesota Native Landscapes to plant in the banks. These plugs contained three main grass species: little bluestem, prairie dropseed and junegrass, and were meant to establish the prairie faster than starting from seed.

On the day the plugs arrived, Grow: Johnson County staff and 10 volunteers from across the region planted every last plug in four sections of beetle bank. The volunteers included those who regularly volunteered at the Grow farm; a few from the Johnson County Historic Poor Farm where Grow is based; Sarah Nizzi from the Xerces Society; and some members from a local naturalist group.

While three of Grow: Johnson County’s staff planted the main plugs using the tractor and water wheel transplanter, the other volunteers followed and added the remaining plants. Although the planting was tough work, the volunteers and Jake rallied around the beetle banks as a haven for beneficial insects and beauty on the farm. 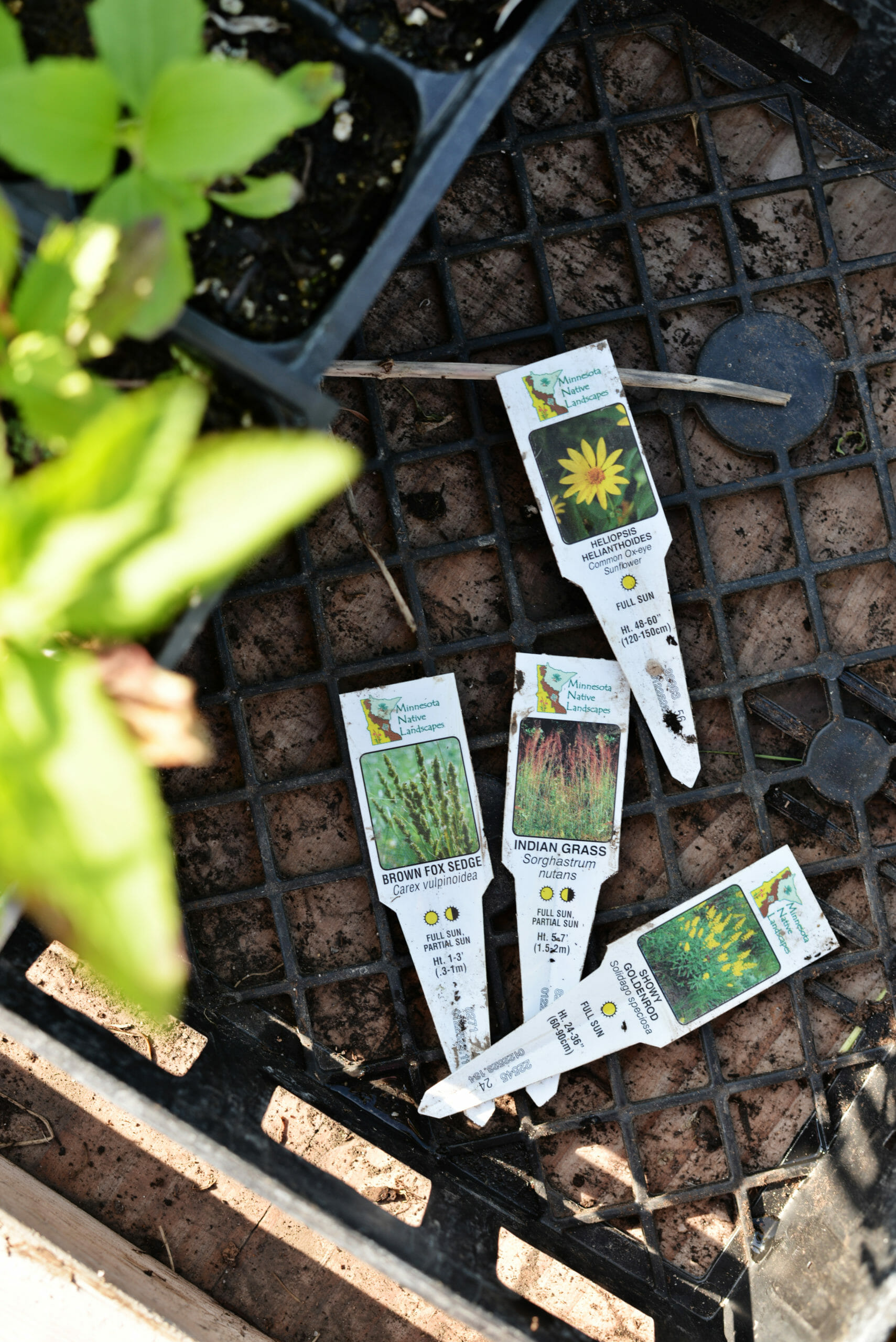 Mark Quee’s prairie strips also came together with the help of the community and Practical Farmers of Iowa. At the 2019 PFI conference, after Sarah Foltz Jordan’s conference session “Installing Prairie Habitat: Starting With Seedlings,” Mark approached Sarah, introduced himself and Scattergood and offered to work with her on pollinator projects. Sarah leapt at the opportunity and brought Sarah Nizzi on board. Together, they came up with specific seed and transplant mixes for the Scattergood strips.

Mark’s first prairie strip installation was funded by Xerces Society and planted by staff members Sarah Foltz-Jordan and Sarah Nizzi. His prairie strips were also planted with transplants for quicker establishment. “It was really fun because [the two Sarahs] were trying to get the plants separated by heights and bloom times, so we could have a really nice cascading effect as you go down the row,” Mark says. “It’s more expensive and labor-intensive, but after one year it’s pretty amazing.”

Mark slowly turned more of the unproductive parts of Scattergood’s land into pollinator habitat. When Mark decided to break up one of his bigger fields with a row of big bluestem, Xerces Society brought in volunteers to help him install three extra rows of prairie with added diversity. Xerces and Mark organized a planting day, with volunteers from Xerces Society and PFI, who planted bluestem transplants by hand.

From left to right: Jake Kundert plants plugs into the holes created by the water-wheel transplanter. A tray containing plugs of long-beaked sedge. Sarah Nizzi smiles while grabbing plugs to plant.

The Healing Nature of Habitat

At Grow: Johnson County, Jake says the beetle banks present an opportunity to showcase how food and nature coexist on a farm. “The beetle banks are an opportunity to share the value of these native plants – plants that have been in Iowa for thousands of years – in modern, agricultural landscapes,” Jake says. At Scattergood, the prairie is integral to student engagement: Mark frequently involves his students in farm management and efforts to establish prairie through class curricula. Right now, he and his students are working on a SARE grant to plant understory in their orchard.

On-farm prairie has not only brought Jake and Mark closer to their communities, but it has brought healing to their operations. For Jake, installing beetle banks brought ecological balance between predatory ground beetles and potato bugs. The predatory beetles also eat weed seeds. “Just think,” Jake says. “You create this little space for a bug and it takes care of a problem you might have on the farm, like dealing with a pest as important and detrimental as the potato beetle.” He looks forward to seeing how restoring this ecological balance over time will decrease the need for harsher methods of pest control, like chemical application.

Mark’s problems also diminished with the planting of his prairie. His erosive patch of land finally stabilized, and by taking pressure off of underperforming areas, his operation is more efficient. The prairie is also helping to unite and educate his students – and pollinators and ground beetles are using the prairie strips for shelter and food, in return benefitting the surrounding area. 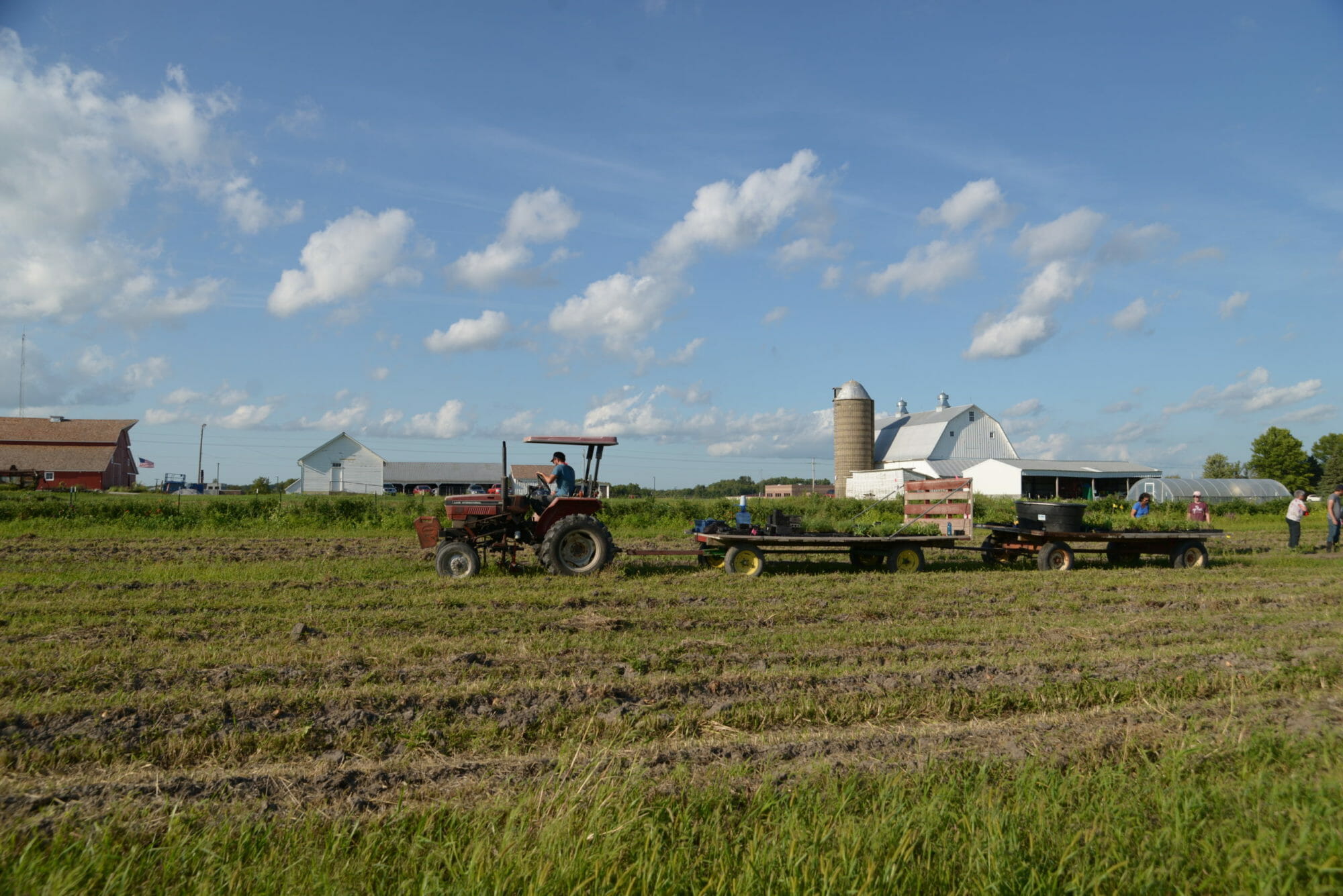 Considering Your Own Habitat

For those considering adding habitat, Jake suggests looking at what is reasonable with the given setup, preparing to manage it for the next three to five years and using what you already know to your advantage. “Having not a lot of experience, we went back to doing what we know – and we know how to plant transplants,” Jake says. “So we plant it like we would plant our cabbage field.”

Mark recommends starting with buckwheat as a precursor to prairie, as buckwheat is easy to manage, makes an immediate difference and can be eradicated at will. Otherwise, he suggests finding the less productive areas, reaching out for assistance and thinking about the long-term in your decision-making. “Even if you’re discouraged, try not to judge for five years,” he says. “I suspect you’ll be happy with what you did.”

When well-established prairie is in full bloom, Jake and Mark both say they love to watch the colors change from season to season, especially as the prairie matures. Tallgrass prairie is reminiscent of Iowa’s past, and can build community in the present.

“Just to know that there’s room for beauty in a farm that’s also focused on productivity, that’s important spiritually, to make room for the things that we don’t eat,” Mark says. “It feels like we’ve planted hope.”

From left to right: Theresa Carbrey smiles while handling a prairie plant. Volunteers plant along the rows. Volunteer Michi Lopez keeps track of the plugs being planted.

Live from the Farm: Benching & Boulders: Restoring Stream Hydrology and Habitat for Wildlife and Water Quality