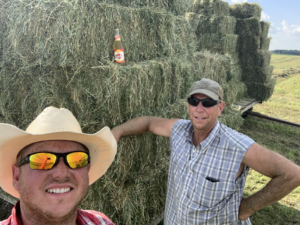 Tracy Skaar (right) and his son after a day of stacking hay bales.

For growers looking to get into small grains or scale up their production, it’s important to consider equipment options. In March we talked to three seasoned small grains farmers who shared their experiences with different seeding, harvesting, and small grain storage methods.

Tracy Skaar of Hayward, Minnesota grows 15 to 30 acres of small grains, primarily oats, on his farm each year. Tracy markets his oats locally and harvests his straw to use as livestock bedding. Doug Alert and Margaret Smith of Hampton, Iowa have been certified organic since 1994 and grow oats, winter rye and peas. They have also grown barley and wheat in the past. Doug and Margaret have been seed producers for nearly 35 years. 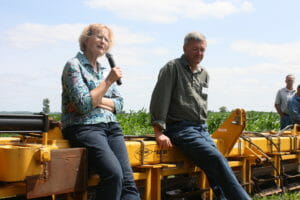 Margaret Smith and Doug Alert at a 2015 PFI field day they hosted.

Many farmers plant their small grains with a grain drill, as it allows for more precise seed-to-soil contact. However, it is also possible to broadcast small grain seed and come back with a light tillage pass and a cultipacker. To keep costs down on his small grains acres Tracy has used a trustworthy John Deere Van Brunt drill, but in recent years has been updating his spring seeding practices.

“Our local NRCS has a no-till drill that has both grass seed and alfalfa seed boxes on it, they are renting that for ten dollars per acre and we’re going to try that this year”, Tracy says. “It will make it easier to seed down our clover with our small grains.” In the past he has broadcast an alfalfa-clover mix while spreading fertilizer over the oats, and while it can work in a pinch, Tracy prefers to use a drill.

For their seeding needs, Doug and Margaret currently use a John Deere model 750 no-till drill. It has a single disk opener with a depth control wheel alongside the opener. “I like the single disk: it causes minimal soil disturbance, and the depth control wheel gives me uniform seed depth” says Doug, “Also, with a simple adjustment of down pressure on the openers, I can go from no-tilling into a frozen crust to seeding a freshly tilled field.” Doug has added a hydraulic seed meter drive, repurposed from a John Deere planter, and an electronic scale to his drill. This allows him to monitor his small grain seeding rate and adjust it from the cab.

Ensuring a firm seed bed is important for uniform oat germination and emergence. When under-seeding his oats with an older drill, Tracy will come back through with a cultipacker or alfalfa seeder, “to firm the ground up and get the seed buried a little better”, he says. Doug and Margaret’s drill uses an in furrow seed firming wheel to help with germination, which, “most drills don’t have” notes Margaret. Tracy recommends staying within 6 to 7.5-inches for small grain row-spacing to help with weed control. Doug suggests an optimal seeding depth of .75 to 1-inch for winter rye, and 2.25 to 2.5-inches for oats.

There are two main options for harvesting small grains: swathing the grains into a windrow or cutting and harvesting the grains directly. “I like to swath, it gets the oats dried down a little faster, and it makes it easier to combine” says Tracy. Doug and Margaret are also equipped to swath their small grains, although Doug says, “for the rye and the oats I go into the season planning to harvest them standing, but will adjust based on the amount of lodging and weed pressure.”

When it’s time to pick up the oats out of the windrow, Tracy uses a belt pickup head that was converted from an older model grain platform. He only had to make minor adjustments to fit it on his combine. He recommends adjusting the fan to achieve desired test weight. 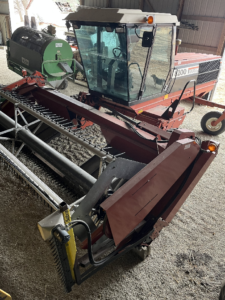 He adds, “if you’re getting a 34 or 35 pound per bushel test weight, and you want a little heavier, turn the fan up and blow some of the lighter stuff out the back.” He wouldn’t recommend exceeding 38 pound per bushel test weight during harvest as doing so may blow saleable grains out the back of the combine. Combines with draper heads work similarly to a swather and may be just as suitable for small grains harvest.

Doug notes, “When I’m swathing I cut grain the grain fairly low and when I take the grain standing I will go as low as I can, only to the point where I’m just starting to clip a little of the under-seeding.” He uses a standard platform head with the flex cutter bar locked in the upper position for direct cutting and he adapted a John Deere model 212 belt head for picking up swathed grain. Doug’s experience lies largely with CaseIH combines, and he has some helpful pointers for anyone trying to hone their combine knowledge for small grains harvest.

“I use filler plates under the concaves to block the material from dropping through at the very front, that allows it to spend more time in the threshing area” says Doug. The rotor speed will hover around 900-1000 rpm for the majority of small grains. For oats, this rotor speed helps separate the two oat kernels in each spikelet, which Doug advises, “is the easiest way to increase test weight.” Doug also uses smooth, slotted rear grates, which “don’t break up the straw as much as the more common key stock grates, making it easier to keep straw out of the grain tank.”

Left: Tracy’s straw chopper with the regular deflector fins, which are removed for small grain straw harvest. Right: the shroud that gets bolted to the back of the chopper to keep the windrows in tighter spacing.

To make the best use of his equipment Tracy has made a custom shroud for the back of his straw chopper to tighten up his windrows for straw harvest. He’s observed that straw sometimes won’t dry down as fast when using a fungicide, so using a straw chopper helps him achieve his desired moisture level faster.

Doug and Margaret don’t usually harvest straw from their small grains preferring to keep nutrients, like potassium, on their fields. But if taking the straw off the field, Doug suggests, “for the CaseIH combine put the internal straw chopper in low gear, fully open the concave plate, take the adjustable knives out, and you will have nice sized straw.”

“The more you move oats the better sample you will get,” remarks Tracy. Oats will enter a ‘sweat’ phase after they are harvested, and moving them will help mitigate hot spots or moisture build up. If the oats aren’t moving around, Tracy suggests utilizing a screw fan to draw air and moisture up and out of the oats if they’re being kept in a location without drying capabilities.

Doug and Margaret utilize grain bins with drying floors and large fans to keep air circulating in their harvested small grains. It is especially important to get air movement if the oats are taken standing. “You need to be able to move a lot of air through the grain mass to equalize the moisture and temperature during their ‘sweat’”

“The advantage of swathing the oats is that they go through their sweat while in the windrow”, says Margaret. During the sweating process, the moisture that works its way out of the oat kernels dries, but you may still want to aerate the grain to take out the field heat. “However”, Margaret notes, “the weather patterns have changed, so our windrowed oats are getting rained on more than they used to. Where weed control is good we’ve been taking them standing.” The ‘sweat’ only applies to oats; for other small grains the post-harvest handling will have one less step.

Small Grains Harvest: Maintaining Quality With the Equipment You Have