Heath Stolee has found ways to integrate wetlands, buffers and other on-farm habitat while staying profitable.

Heath Stolee has a passion for conserving the land, habitat and wildlife of his home state. 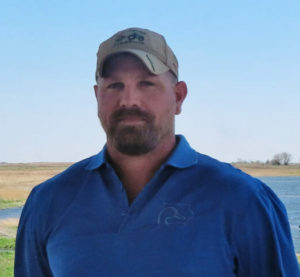 In 2009, he returned from military service in Iraq to Nutty Farmer Chestnuts, his family farm in Radcliff, Iowa. Soon afterwards, he and his family started experimenting with ways to integrate conservation practices into their farm management.

Heath’s conservation efforts accelerated in 2020, when he worked closely with Ducks Unlimited and the Iowa Department of Agriculture and Land Stewardship to install a 16-acre wetland. As an active member of Ducks Unlimited and a board member of the local chapter of Pheasants Forever, participating in the Conservation Reserve Enhancement Program (CREP) was a natural fit. Part of the federal Conservation Reserve Program, CREP involves state, federal, local and private partners to offer financial incentives to landowners for voluntarily restoring wetlands to benefit water quality. 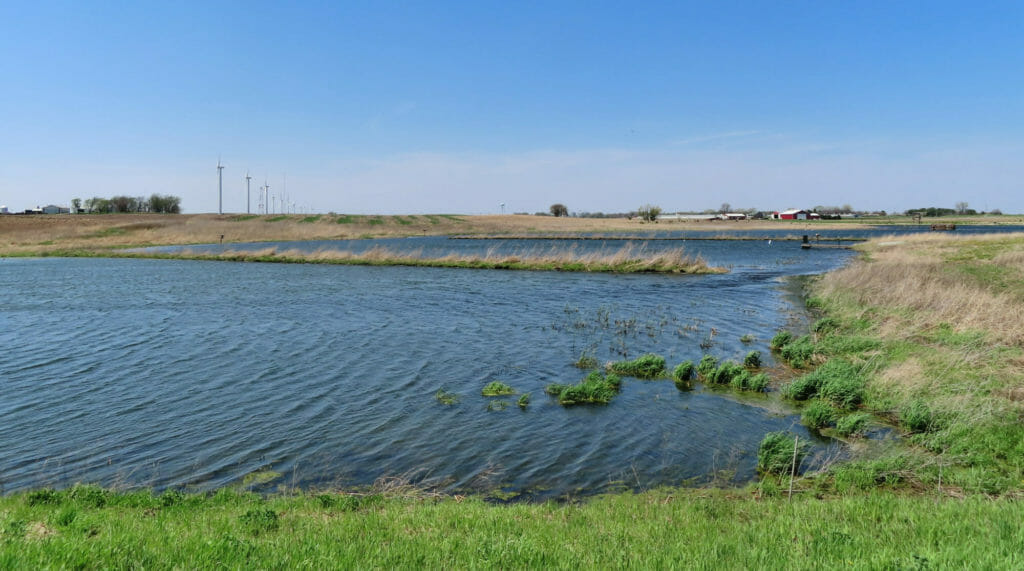 Through the program, wetlands are intentionally placed in areas where they capture water from tile drainage – in Heath’s case, about six tile lines from 1,893 acres of agricultural land – before it enters streams and rivers. The wetlands remove nitrate and other agricultural chemicals that would otherwise enter surface waters while also providing habitat for a variety of species. Ducks Unlimited estimates that Heath’s wetland will, over its lifespan, remove more than 1,744 tons of nitrogen from the drainage tile in the watershed.

To pay for the project, Heath took advantage of financial incentives through CREP, along with additional funds from Ducks Unlimited’s Living Lakes Initiative. In total, Heath enrolled 56 acres, including the wetland, into a conservation easement that ensures those acres will be protected as wildlife habitat.

“It’s good for private landowners that want to do something,” says Heath about the benefits of the Conservation Reserve Enhancement Program. “[The wetland] is paid for, you still own it, you get to enjoy it and it’s the right thing to do for wildlife and water quality.”

The Value of Wetlands

So what are wetlands and why are they so important to protect, build or restore? Adam Janke, a wildlife extension specialist with Iowa State University, defines wetlands as places where water and water-loving plants interact to create shallow pools that vary in depth and duration of flooding. The definition is broad because wetlands can vary widely, from oxbows and marshes to potholes, shallow ponds and more. 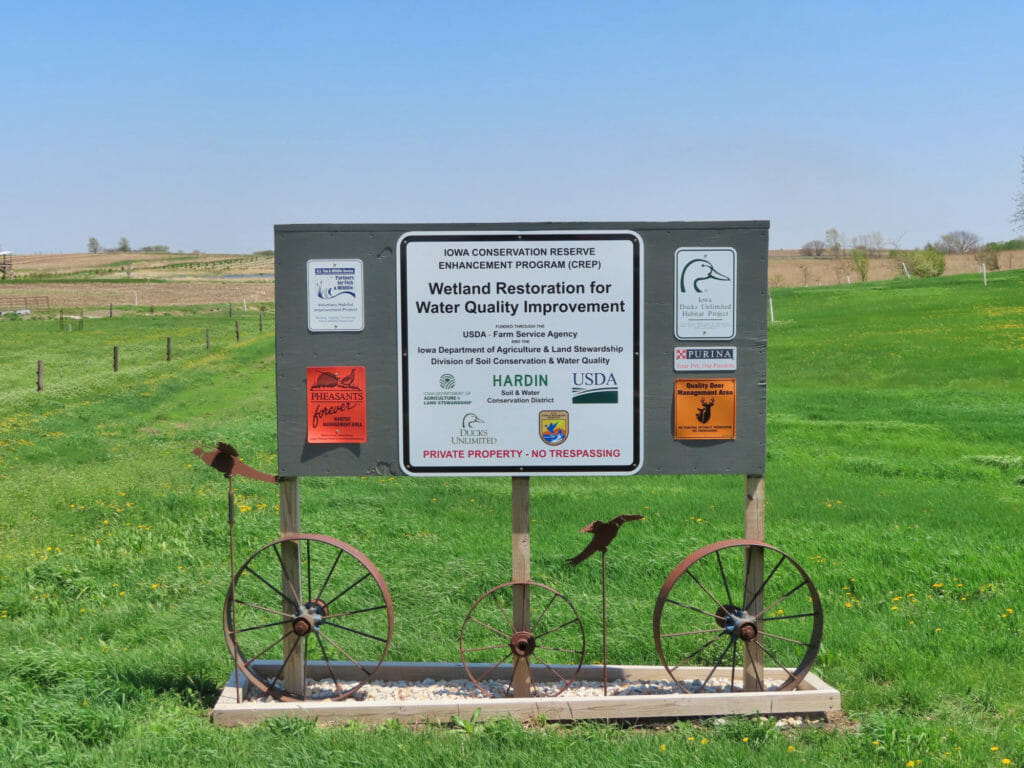 All wetlands, however, provide vital habitat for wildlife, fish and waterfowl – and they were once widespread features of Iowa’s landscape. Today, with more than 85% of Iowa’s land used for farming, wetlands also play a vital role in filtering out excess nitrogen and phosphorus, as well as agricultural chemicals, that are commonly found in agricultural runoff.

Recognizing this, the Iowa Nutrient Reduction Strategy lists wetlands as one of several practices that can help Iowa improve its water quality. The strategy, adopted by the state in 2013, aims for a 45% reduction in levels of nitrogen and phosphorus flowing from Iowa waters to the Gulf of Mexico. These excess nutrients contribute to the Gulf’s annual dead zone, a low-oxygen area unable to support marine life.

Because 95% of Iowa’s land is privately owned, farmers and landowners are key partners in Iowa’s water quality efforts.

“We look for potential sites to restore wetlands, but a lot of the time, it’s farmers and landowners coming to me,” says Mike Shannon, a biologist from Ducks Unlimited whom Heath worked with to create his wetland. “Wetlands have a high cost to begin with, but they are the longest lasting of all the water quality practices. When someone contacts me, I try to figure out their vision and what programs might work for them.”

Usually, Mike adds, it ends up being cheaper for farmers to install a wetland than to keep spending money – whether by installing more tile, replanting, fertilizing or losing yields – on an area that isn’t good for production. For Heath, that constant struggle with a patch of ground signifies the area may be better as a wetland. “We have to take care of the land, and if the land wants to be wet anyway, you’re not taking prime acres out of production,” he says. “It just makes sense to put some of these things on the landscape.”

Mike acknowledges that taking ground out of production is a big decision. While people decide to install wetlands for different reasons, he says that, in his experience, most landowners find that the wetland solves a problem and improves their quality of life. Adding a wetland can also be a gateway to exploring other conservation practices, he notes.

“I once worked with a landowner who wanted to put a 10-acre wetland on family farm ground right behind the house,” Mike says. “He said this area was essentially always wet and wasn’t good for production. At first, the landowner’s wife had doubts – she didn’t want mosquitos and bugs around, and didn’t want any part of it. Now it’s their favorite place to be.”

The couple built a deck that overlooks the wetland to enjoy the view and all the visiting waterfowl, and Mike says they found it especially meaningful when their son shot his first duck there. Notably, their positive experience with the wetland encouraged the couple to experiment with cover crops. “That CREP wetland had made them look into soil health and other conservation practices, like putting radishes out there, and they are so happy.”

Heath is also experimenting with other conservation and agricultural practices. For instance, he has added buffer strips and planted chestnut trees to diversify his property, help the land and “break up the monotony of the corn.”

“I had about 15 pounds of production last year on 600 trees, and expect production to really ramp up in three or four years as the trees mature,” he says. “Right now, the important thing is that they’re growing. It’s fun to watch them start to produce.”

Heath is also collaborating with Mike and ISU to add some vegetation to the wetland. They have planted bull rush, arrowhead and wild rice to provide food for the waterfowl and wildlife that lives on and visits the farm. Heath says he doesn’t mind spending money on projects like this because he sees the benefits. “The wetland and other habitat on the property has provided a resting area and a home for trumpeter swans, waterfowl, pheasants and other wildlife,” he says, “all while helping water quality.”

Farmers and landowners interested in ways to add or restore a wetland or other habitat on their land have a range of options. “There are plenty of programs to help with financial assistance,” Mike says. “Often, Ducks Unlimited has resources to help out or can serve as a technical expert.” He and other private lands biologists also regularly work with government agencies and nonprofit organizations, and can suggest other programs that might be a good fit.

“I am happy saying, okay, I can’t help you but let’s go talk to the U.S. Fish and Wildlife Service, IDALS, DNR or some other organization,” Mike says. “Let’s talk to somebody that has something that might work for you.”

When he does have a chance to work with farmers and landowners, Mike says he appreciates the opportunity to hear farmers’ perspectives, work with them to meet their goals – and sometimes, help shift their thinking about conservation.

“I’ve really enjoyed working with Heath to add different conservation practices to build a resilient farm,” he says. “When I speak to landowners, I occasionally get the comment that Iowa is only for farming, and Heath’s perspective is refreshing.”

Responding to that sentiment, Heath says: “That’s not how it used to be or what it should be. The land provides us income, and we have to take care of it. We all have to farm – I have to farm, and everyone has to make a living.

“But there are also acres that don’t need to be farmed. There is no reason we can’t make a prosperous living and put some of the other good stuff into conservation. It can be a give-and-take.”

Practical Farmers of Iowa can help connect people to their local USDA Service Centers or a private lands biologist near them. Contact Jorgen Rose at (515) 232-5661 or jorgen@practicalfarmers.org.

Read the wetland story of another PFI family, John and Beverly Gilbert.