Coming Home, Passing It On

After a storied career in government that took him across the globe, lifetime member John Norris finds hope for Iowa agriculture through PFI

John Norris, a lifetime member from Des Moines, was in-between meetings when I called him in early July. 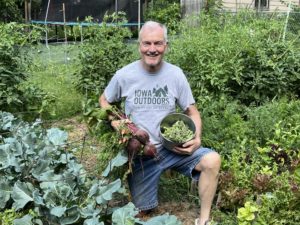 Following a long career in government at both the state and national levels, he currently serves as the Polk County administrator, where he has kept busy since 2021 managing daily county operations and handling financials. We had a positive conversation about John’s work in agriculture, his vision for Iowa agriculture and how he defines a “friend of farmer.”

The question arose because, until recently, PFI membership forms and member surveys included the category “friend of farmer” as an identifying term. Internally, we defined it as “a non-farmer who does not own farmland, nor plans to farm in the future.” While the label helped us identify our non-farming members, it also proved to be confusing: Many farmers, aspiring farmers and farmland owners also consider themselves friends of farmers. For this reason, we switched to using the straightforward “non-farmer” label in our member database. But the “friend of farmer” notion still holds sway – and meaning – for our members.

For John, it means actively supporting farmers in their goals. “What I’m trying to do is empower what PFI farmers are trying to do and support them in making a good living and producing healthy food,” he says.

John grew up on a hog and grain farm near Red Oak, in Montgomery County, Iowa, where his brother still lives. John kept close to home, serving with various agricultural non-profits during the farm crisis of the 1980s, owning and managing a restaurant in Greenfield, Iowa, and gaining a law degree. His knowledge of agriculture and energy issues eventually led him to work in government, which included serving on Iowa and national political campaigns, and in other political roles in Iowa.

In 2009, John served as the chief of staff for U.S. Secretary of Agriculture Tom Vilsack. More recently, he represented the U.S. Department of Agriculture for two years as the U.S. minister counselor for agriculture to the Food and Agriculture Organization of the United Nations, which took him and his family to Rome, Italy. As that work ended, the Norrises moved back to Iowa and its agricultural landscape.

“What I’m trying to do is empower what PFI farmers are trying to do and support them in making a good living and producing healthy food.”

John learned of PFI at its inception in 1985, but his bustling political career prevented him from keeping close tabs on the organization. When he returned, PFI member Matt Russell, who now directs Iowa’s Farm Service Agency, invited John to PFI’s 2018 annual conference. The positive, collaborative energy of the event resonated with him and he joined as a member that year.

“You just see the dedication and belief in the farming community that PFI represents, reconnecting land to food to the environment, which is so essential for sustainability,” John says. He attended more PFI events, spread the word and became a lifetime member in 2019.

PFI’s vision – an Iowa with healthy soil, healthy food, clean air, clean water, resilient farms and vibrant communities – speaks to him. “Farmers in PFI are providing living examples in our state, and around the world, of how you farm sustainably,” he says, adding it’s “not just business but a life commitment to raising food in a sustainable way.”

John sees the work PFI members have done to create resilient farms and communities – holding events; sharing their experiences with cover crops, small grains, on-farm habitat and other practices; mentoring others; and more – and says the best solution is more of the PFI approach: connecting farmers to share knowledge and build community.

“I think that’s the collaborative community spirit of PFI members and farmers,” he says. “They want to share. Everyone tells Iowa that we should feed the world, but if we can teach the world to deploy practices PFI farmers use, that plays a critical role.”

Next article: “Review of: ‘Pastoral Song’ “