Are Fungicide and Insecticide Seed Treatments Necessary for Corn? 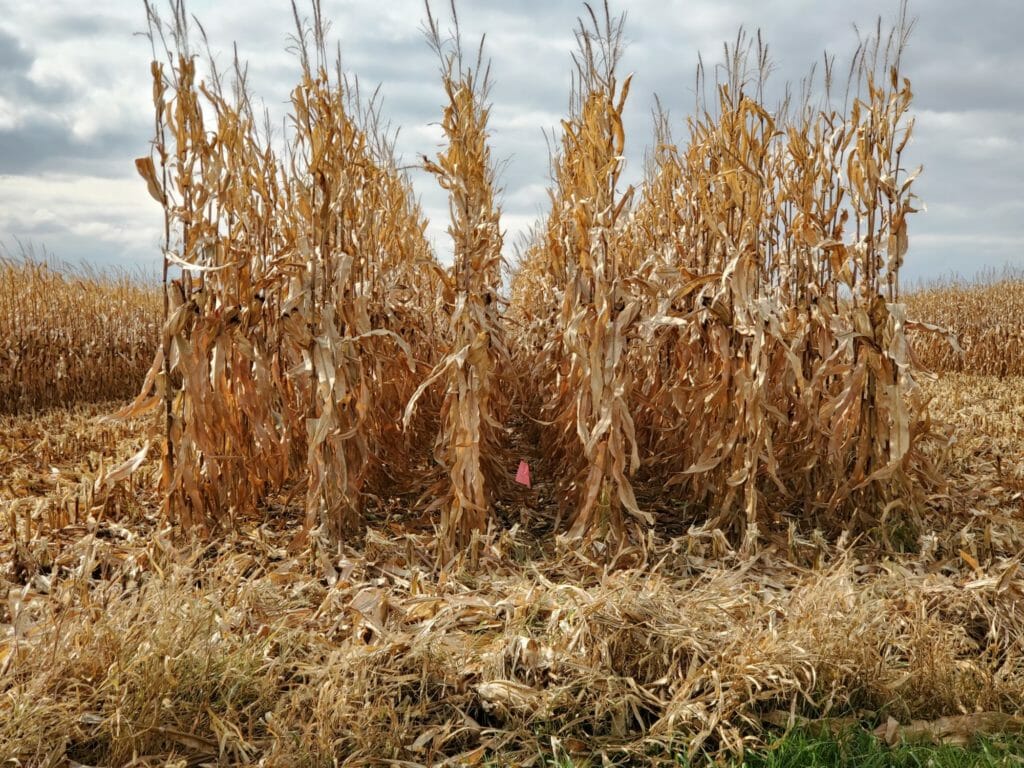 On May 9, 2022, Sloan planted corn in 30-in. row-widths at a population of 32,000 seeds per acre into a field previously in soybeans and seeded to a cover crop of cereal rye, winter wheat and winter barley in fall 2021. He compared three seed treatment packages:

3. Humic acid (no fungicide, no insecticide):

Dick Sloan used labeled and color-coded flags to mark strips in which he planted the three different seed treatment packages. Photos taken May 18, 2022.

Sloan harvested corn from the middle 15 ft (6 rows) of each strip and recorded yields from each individual strip on Oct. 13, 2022. Yields were adjusted to 15.5% moisture.

To evaluate the effect of seed treatment on corn yield, we calculated Tukey’s least significant difference (LSD) at the 95% confidence level. If the difference between any two of the treatments was greater than the LSD, we would expect such a difference to occur 95 times out of 100 under the same conditions – we refer to this as a statistically significant effect. On the other hand, if the resulting difference between any two treatments was less than the LSD, we would consider the results to be statistically similar. We could make these statistical calculations because Sloan’s experimental design involved replication of the treatments (Figure A1). 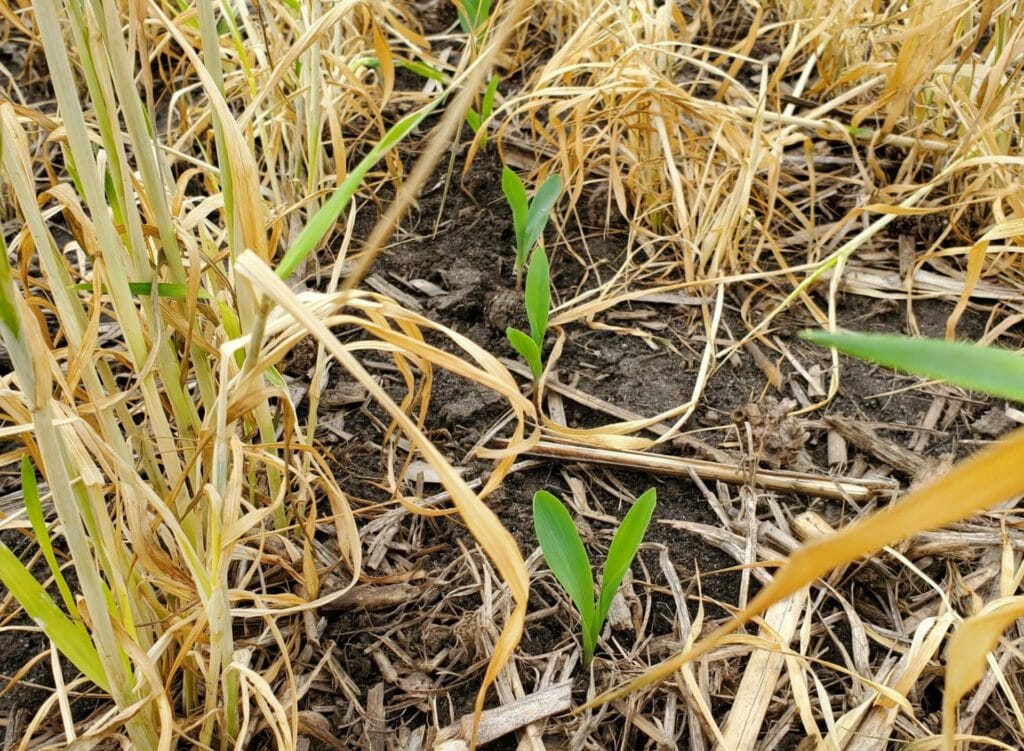 Corn seedlings growing up among cover crop residue at Dick Sloan’s on May 18, 2022 (9 days after planting and 7 days after terminating the cover crop).

Corn yield was not affected by seed treatment (Figure 1). In other words, the Humic acid treatment, which did not contain a fungicide or insecticide, produced yields equal to seeds treated with fungicide and insecticide or fungicide only. Across all treatments, the average yield was 214 bu/ac which is just above the five-year average for Buchanan County (209 bu/ac) where Sloan farms.[1] 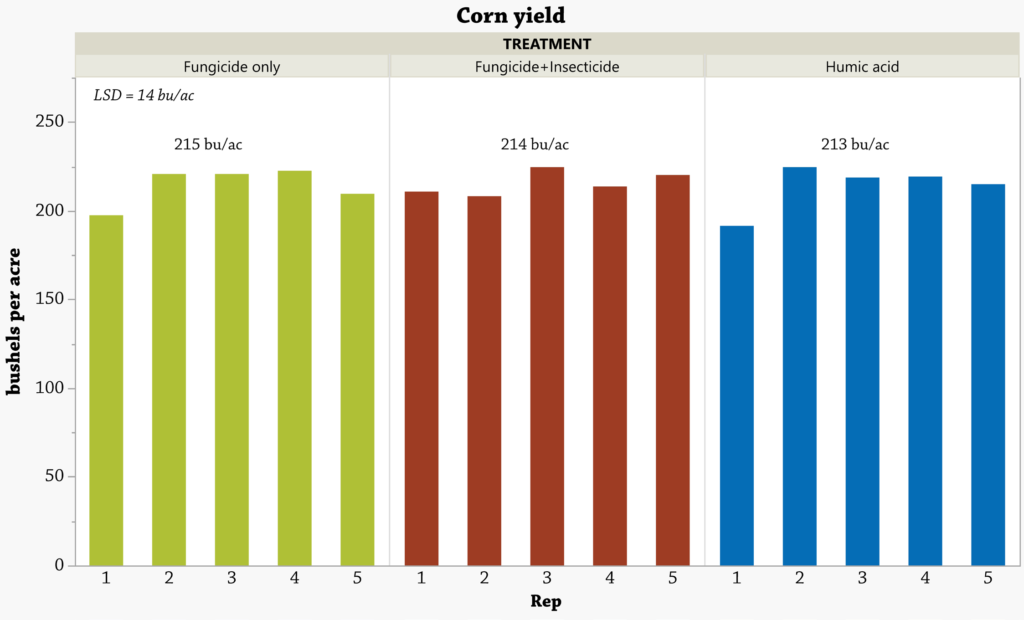 Sloan conducted this trial on corn seed treatments because he questioned the use of preventative insecticide applications for corn planted after soybeans in rotation. “I want to reduce unnecessary insecticides in the soil health environment,” he said at the onset. Sloan’s results showed that forgoing insecticide seed treatment did not reduce yields and improved net returns through reduced costs. Forgoing both the insecticide and fungicides in the Humic acid treatment did not reduce yields either (though, it turned out to be just as costly as the Fungicide+Insecticide treatment).

“Now I’m less convinced that we have a routine need for fungicides as well,” Sloan said. “Not getting a response from the fungicides on seed really makes me wonder if they are interfering with the healthy fungi I am trying to develop in my soil. Are we buying pesticides as a form of insurance, to alleviate some perceived risk which may not be all that likely? I don’t want to poison soil health with needless applications of pesticides.”

FIGURE A1. Dick Sloan’s experimental design consisted of five replications of the three treatments. This design allowed for statistical analysis of the data. 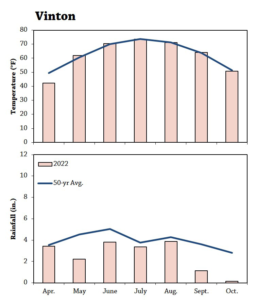 FIGURE A2. Mean monthly temperature and rainfall during the trial period and the long-term averages at Vinton, the nearest weather station to Sloan’s farm.[2]