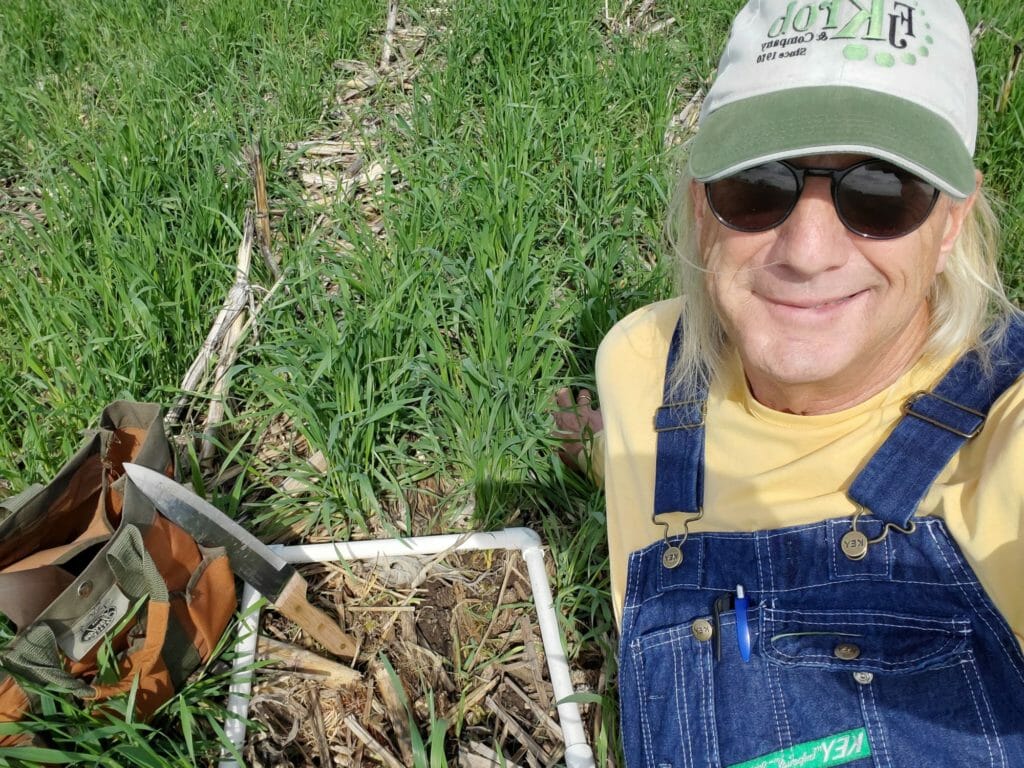 Dick Sloan is always looking for ways to maximize the benefits he gets from his overwintering cover crops. “I hope to get more growth out of my cover crops to gain more soil health benefits” he says. He has previously looked at how he can maximize cover crop growth in the spring before planting a corn crop.[1] This year Sloan’s attention turned to the effects of nitrogen (N) fertilizer on cover crop growth, both when grown for seed[2] and when a mixture of rye, triticale, and hard red wheat are grown as an overwintering cover crop before his soybeans (present study). There is a dearth of information about how cover crops, particularly mixtures like Sloan is using, respond to N fertilizer in the Midwest. It is often assumed cover crops like rye are good nutrient scavengers and their growth is not N limited, but on-farm research is the perfect setting to test this assumption.

On Oct. 3, 2021 Sloan no-till drilled a mixture of 45 lb/ac cereal rye (variety not stated; VNS), 25 lb/ac triticale (VNS), 20 lb/ac hard red wheat (VNS) into corn stubble in 7.5-in. rows using a 1.5-in. depth setting. He compared two N-fertilizer treatments. He replicated each treatment four times, for a total of eight strips (Figure A1):

Each treatment strip was 1.17 to 1.96 acres, depending on where they fell along the contours. Besides the amount of N applied at cover crop planting, the plots were treated identically (Table 1). Sloan looked at the effect of the two treatments on both cover crop biomass and subsequent soybean yields. 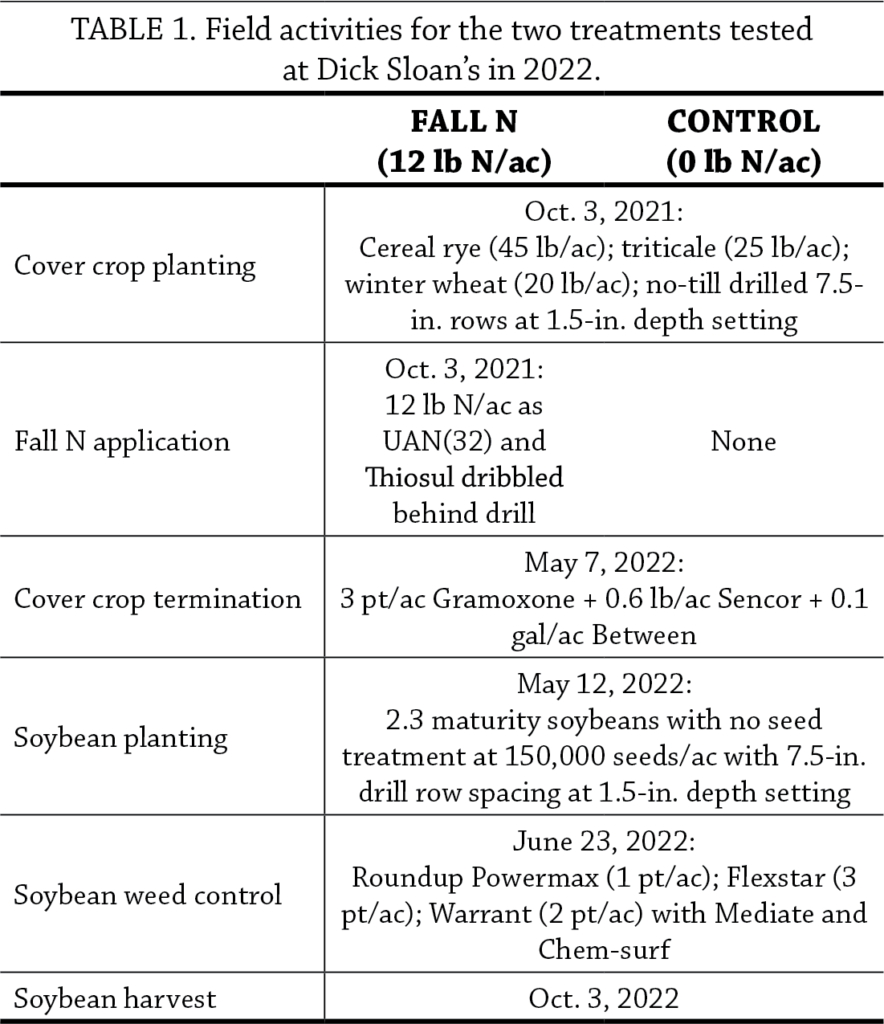 The day prior to cover crop termination, Sloan observed the cover crop growth and took biomass samples from each plot. He air dried the samples for ~3 weeks and weighed them on May 25, 2022.
Sloan also recorded the soybean yields from each strip during harvest (Oct. 3, 2022). Reported yields are corrected to 13% moisture.

Overall, Sloan was pleased with the cover crop biomass, citing his early corn harvest and thus early fall planting date (Oct 3). He observed a uniform stand in both treatments and saw no visible difference in the plots. His measurements confirmed his observations. The Fall N treatment (12 lb N/ac) had a mean cover crop biomass of 2,740 lb/ac. The control plots (no N applied) did average less biomass, but only by 110 lb/ac which was not statistically significant (Figure 1). In this experiment Sloan would have needed to see a difference of at least 630 lb/ac to be 95% confident his treatment had an effect. 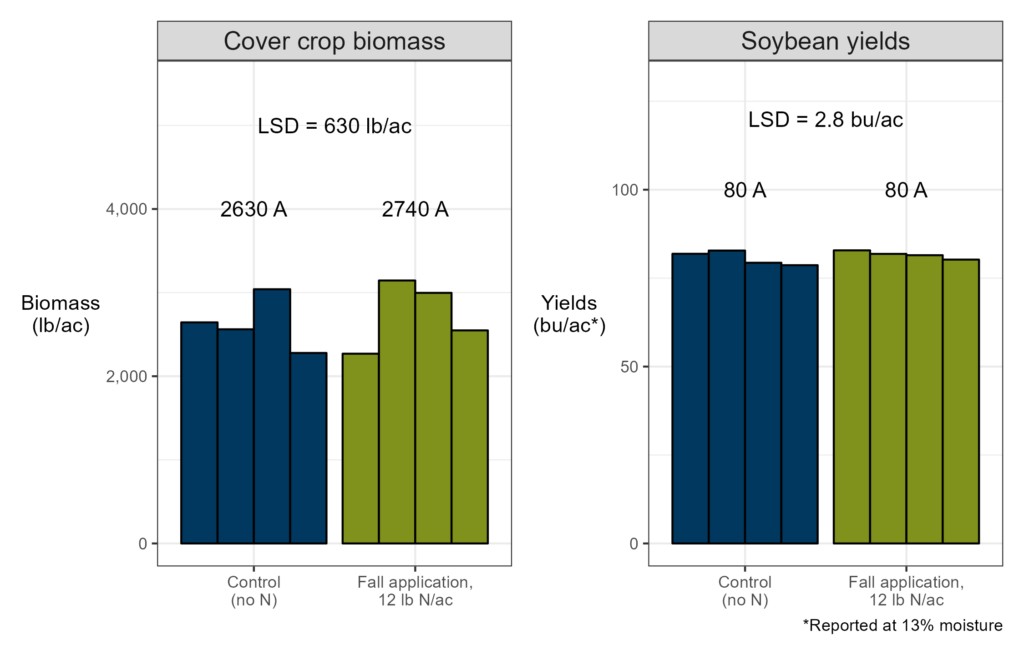 FIGURE 1. Cover crop biomass (left) and soybean (yield) as affected by fall N application at Dick Sloan’s in 2022. Each column represents a replication of the treatment. Above each cluster of columns is the treatment average. Values followed by the same letter indicate no significant difference, least-significant-differences (LSDs) are provided for context. (Left) Cover crop biomass was not significantly impacted by fall application of 12 lb N/ac. (Right) Subsequent soybean yields following the cover crop were also not impacted.

Likewise, Sloan’s soybean yields were not impacted by the fall application of 12 lb N/ac, with both treatments yielding 80 bu/ac (Figure 1). Soybean yields were well above the five-year Buchanan County average (57.4 bu/ac)[3] where Sloan farms.

Sloan noted when he applied the N into his no-till corn stubble, the N landed on top of the corn stubble.

Sloan noted, “I would have liked to figure out a way to get the fertilizer on the ground near the [cover crop] seed instead of landing on corn residue.” While this may have impacted the results, based on this experiment, Sloan is comfortable concentrating on getting an earlier fall planting date to help his cover crop growth. “I definitely won’t bother fertilizing cover crops. I see bigger differences every fall based on planting date,” he added.

Sloan was able to test his hypothesis that a little fall fertilization would help get his cover crop mixture to put on more biomass. He found the fall fertilizer was not a significant factor in cover crop growth on his farm. He is satisfied the cover crops are scavenging sufficient nitrogen, and that nitrogen is not limiting their growth on his farm. He noted that he often has some starter fertilizer left over from his corn, so while he may continue to use it on his winter small grain crops, Sloan said, “I won’t purchase more [fertilizer] to use on my cover crops.”

FIGURE A1. Dick Sloan’s experimental design consisted of four replications of the two treatments (8 strips total), with his prairie strips interspersed between the experimental plots. This design allowed for statistical analysis of the results. 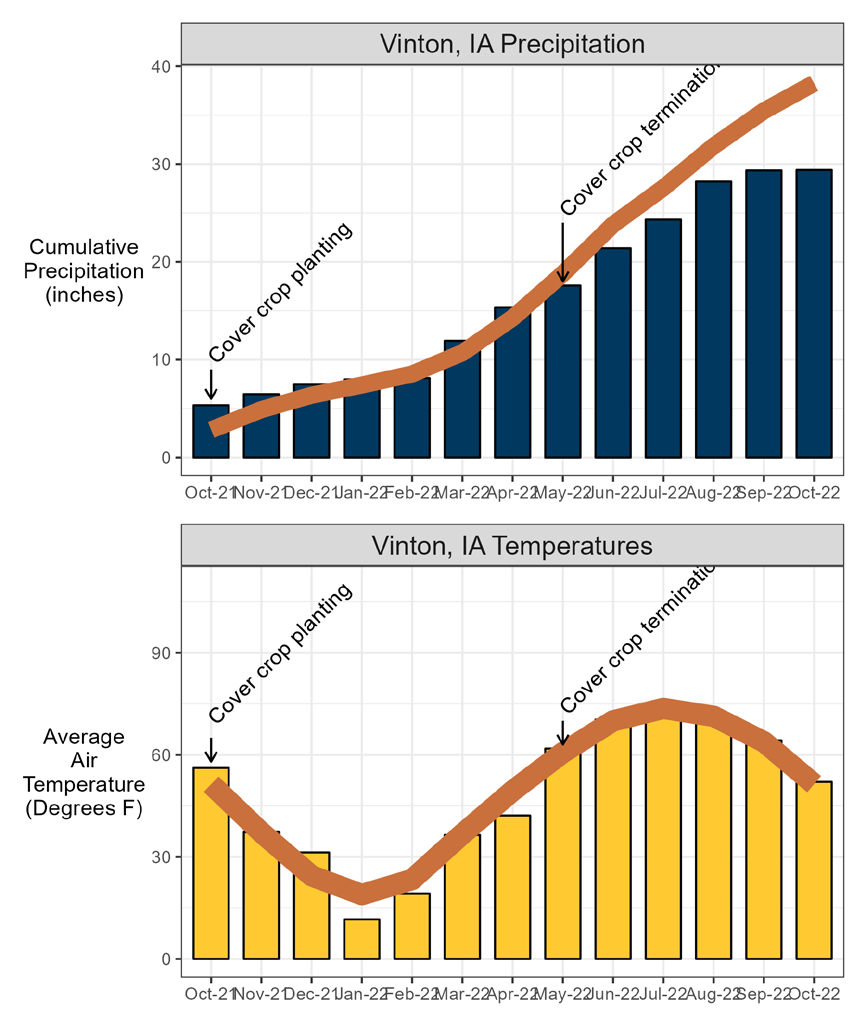