Cover crop termination and cash crop planting in the spring is the most important aspect of cover crop management to ensure good yields. So this spring we’ve scheduled two shared learning calls where experienced cover crop farmers share their “spring cover crop management playbook.” On February 16, Wayne Fredericks, a corn and soybean farmer in Mitchell County laid out his spring plans for us putting emphasis on the importance of planter set up for planting both corn and soybeans into higher residue field conditions created by the cover crop.

“Last fall was the first fall that we seeded 100% cereal rye before corn and soybeans,” Wayne began. “Our first experience with cover crops was fall of 2012, and we did that in strip trials because we saw the need to gather input and research on what cover crops were doing.” Wayne, who was a member of the Iowa Soybean Association Board at that time, used the knowledge he gained in these strip trials to design his finely tuned spring management strategy to maximize benefits from the cover crop and deal with the unique scenarios preceding corn and soybean planting. Wayne’s talk focused on terminating cereal rye in the spring, fertilizer adjustments for corn planted after rye and planter settings for corn and soybeans. 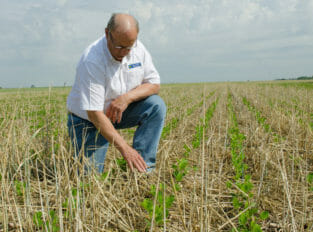 Before soybeans, Wayne maximizes biomass growth and weed control from his cover crop by “planting green” into living rye for the last three years. He says, “when you include your pre-emerge chemicals with the roundup it takes a higher rate to ensure adequate control.” On his farm they combine the cover crop burn down herbicides with their pre-emergence plan just before soybean planting, including 44 oz. of WeatherMAX® + AMS, 3 pints of Harness®, 5 oz. of Sencor® and generic capture.

Before corn, Wayne seeds a half rate of cereal rye (~30 lbs/acre) compared to soybeans (~66 lbs/acre) and terminates the rye with 28 oz. of WeatherMAX® + Roundup® and water. Then he no-till plants corn on his fall built strips before coming back with the pre-emergence herbicide plan. This ensures that the soil is in its final place before the herbicide is applied so the tillage or planter doesn’t turn over an unprotected strip that is susceptible to weeds. Because of his strip till system, Wayne can get away with planting corn one day after terminating cereal rye with no significant yield drag (see his trial results here), but he cautions that this same lesson is not transferable to no-tilled corn which likely needs a longer rest period between cover crop termination and corn planting. 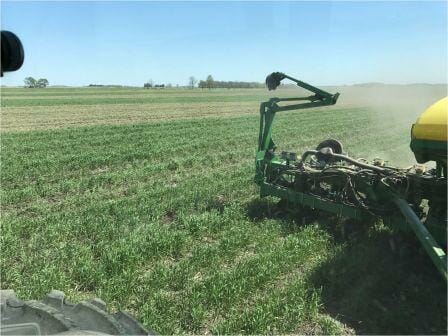 Front loading your nitrogen applications to planting time is also a best practice to avoid yield drag for corn following cereal rye. “You don’t need additional nitrogen in your program,” Wayne says, “but you need to front load it.” He runs fertilizer on his planter, 3 gallons of 8-24-0 starter is placed in furrow. Then he also comes back with 12 gallons of UAN 32% as a carrier with the pre-emergence herbicide (42 lbs of N/acre).

“Your planter is the most important tool that you have on your farm,” he says. “What’s necessary is to give the planter the opportunity to do the job in the conditions that we’re going to have out there. Every planter out there can work with these conditions.” Wayne runs a John Deere® 1790 planter with 15” splitters that he has modified and augmented to fine tune its ability to manage cover crop residue. Here are his 8 planter adjustments for planting into cover crop residue:

Most of these adjustments are already in place for those using planters in no-till and strip-till systems. Wayne’s planter equipped as previously described for no-till/strip-till planting even before his adoption of cover crops.  The extra attention to planting depth was the necessary change when heavy biomass from cereal rye was added to the crop system. Another great resource on planter set up for planting into cover crop residue is Iowa Soybean Association’s guide to Improving Cash Crop Stand Establishment in Cover Crop Fields.

If you enjoyed hearing about Wayne’s spring management plan, tune in next month on March 16 Noon – 1 p.m. to hear from Washington County farmer Steve Berger on his spring playbook, fine tuned to his hillier terrain and lighter soils. Also, don’t miss our farminar on planter set up for cash crop into cover crop on March 6 to join and learn more the farminar page. And be sure to check our lineup of spring field days – spring management will be a central topic at all six events.

Do you sell soybeans in the Archer Daniels Midland supply chain in Des Moines? Then you’re eligible to participate in cover crop cost share and access resources and expert farmers like these through the Unilever Sustainable Soy program. Read more about the program here and reserve your place by signing up for a consultation today.