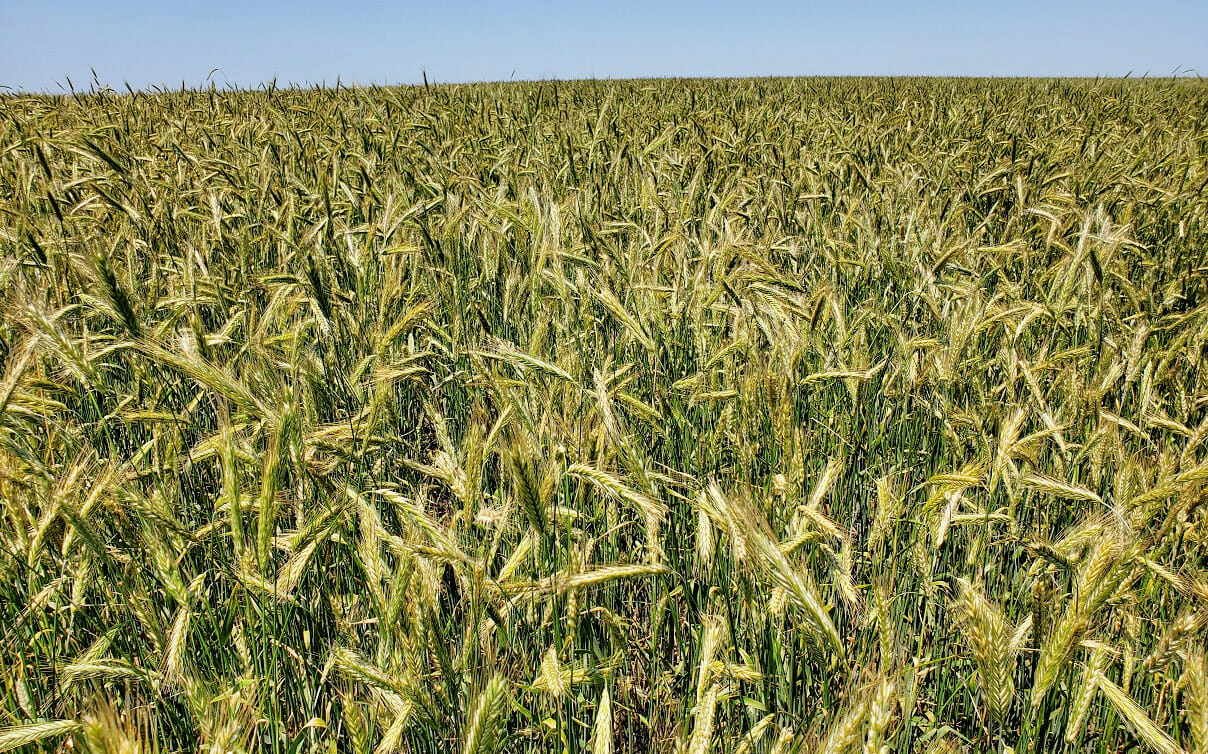 Sloan harvested cereal rye seed from the middle 25 ft of each strip and recorded yields from each individual strip on July 30, 2022. Yields were adjusted to 14% moisture. Sloan sent seed samples from each strip to the ISU Seed Lab on Aug. 3 to determine germination percentage.

To evaluate the effect of N-fertilizer treatment on cereal rye yield and germination percentage (quality), we calculated the least significant difference (LSD) at the 95% confidence level using a t-test. If the difference between any two of the N treatments was greater than the LSD, we would expect such a difference to occur 95 times out of 100 under the same conditions – we refer to this as a statistically significant effect. On the other hand, if the resulting difference between any two treatments was less than the LSD, we would consider the results to be statistically similar. We could make these statistical calculations because Sloan’s experimental design involved replication of the treatments (Figure A1). 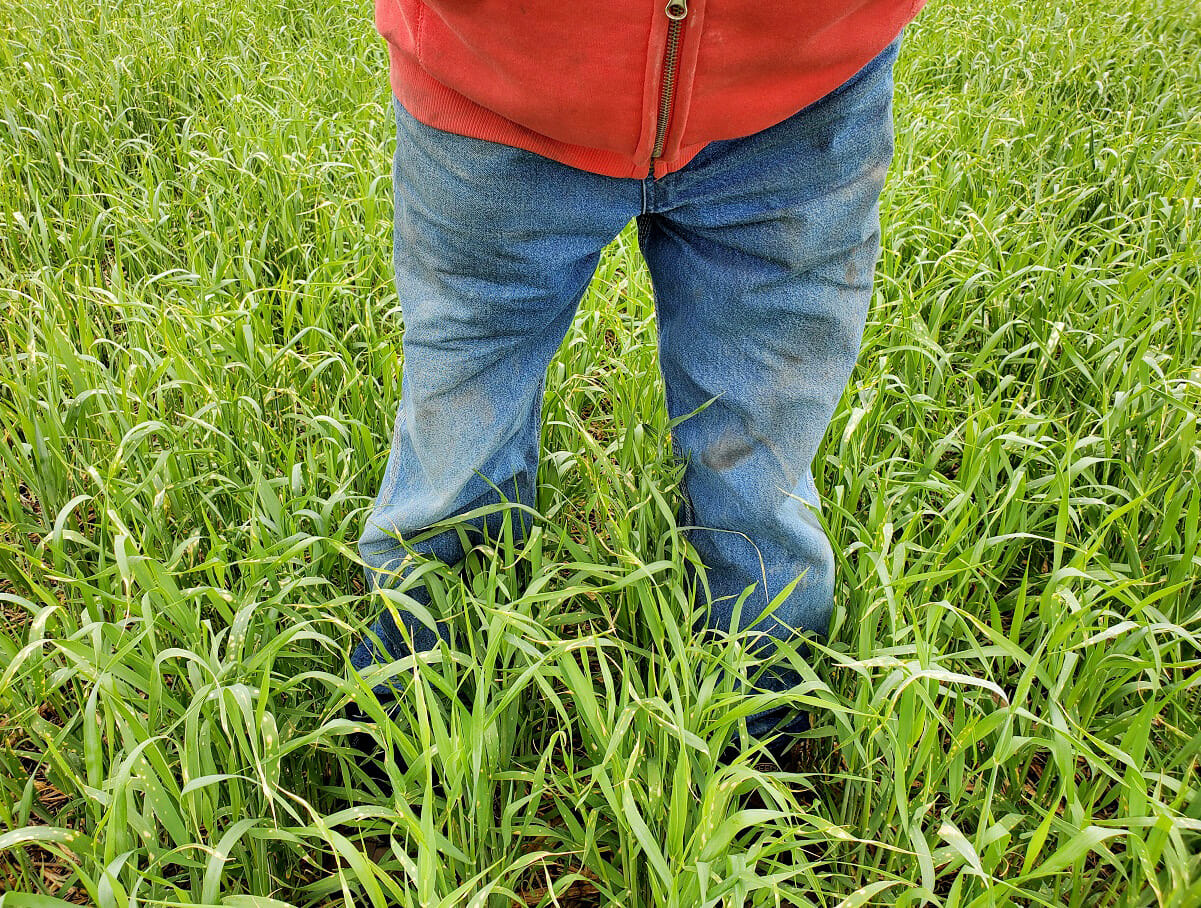 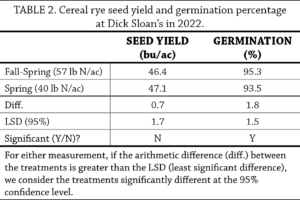 The additional 15 lb/ac applied with the Fall-Spring treatment cost $9.88/ac compared with the Spring treatment. Was this additional cost worth it? Seed yield was not improved but germination percentage was statistically improved by the additional 15 lb N/ac applied in the fall. “I would say improvement to germination by [additional] N fertilizer was limited,” Sloan admitted. “I thought some extra fall fertilizer might boost cereal rye yields [but it did not.]”

At the onset of the trial, Sloan said: “If I see benefits to the simple fall fertilizer applicator I’ve installed on the back of my no-till drill, I will have less incentive to invest in more elaborate placement systems.” Because seed yields were unaffected by N fertilizer regime, Sloan is wondering whether he can alter and improve placement of fertilizer applied in the fall with the drill. He admitted that the current set up he uses to dribble fertilizer between the drill rows cost him very little in terms of supplies and labor; so, he is considering more tinkering because he is still curious if a split-application of N fertilizer in the fall and spring can improve cereal rye seed yield. “I will look at fertilizer attachments which place fertilizer closer to the seed before repeating the trial.”

FIGURE A1. Dick Sloan’s experimental design consisted of four replications of both treatments. This design allowed for statistical analysis of the data. 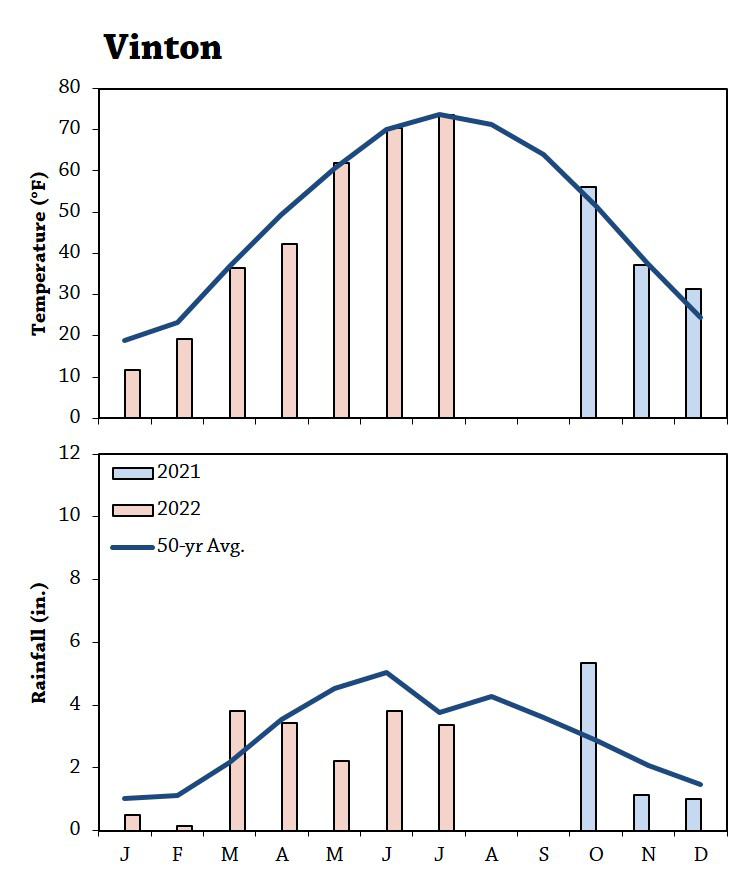 FIGURE A2. Mean monthly temperature and rainfall during the trial period and the long-term averages at Vinton, the nearest weather station to Sloan’s farm.[1]