When growing vegetables that are seeded in a greenhouse and later transplanted into a field, the seed-starting media used is important to the initial resilience of these crops. Three brands of potting soil that are commonly used for these starter media in Iowa: Beautiful Land Products, Cowsmo and Vermont Compost Company. Beautiful Land Products is a local soil company out of West Branch, Cowsmo is a Wisconsin-based company that many farmers use (and is best for bulk orders), and Vermont Compost is an organic, high-quality potting soil and the most expensive of the three. Knowing the potting soil that each farmer prefers most will allow them to determine whether they should bulk order soil, purchase it from their local shop, or invest in a brand that is not local, but produces higher quality transplants. 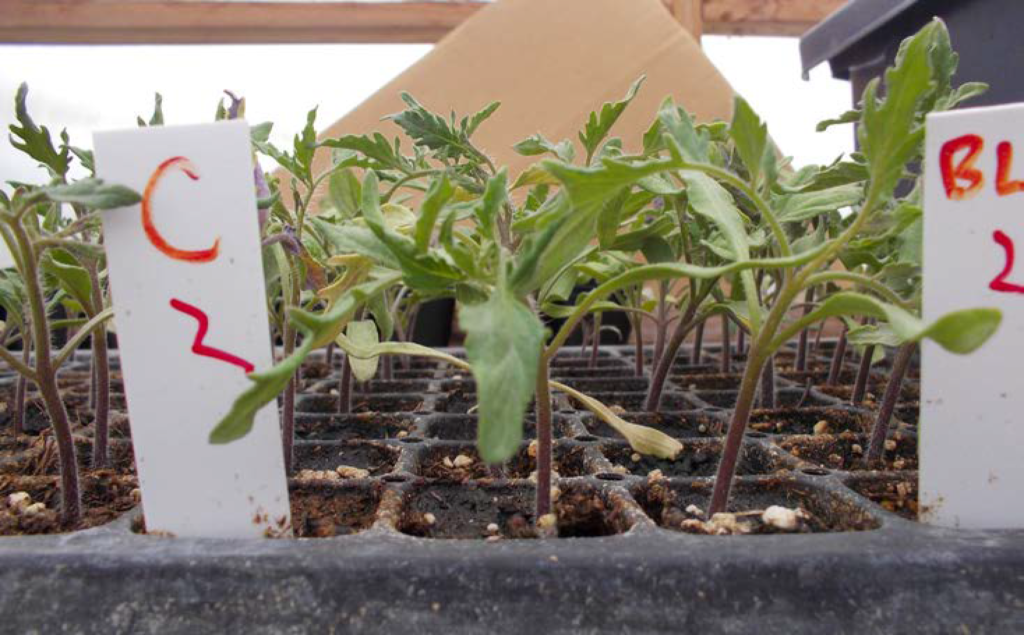 Cooperators were curious about which media of the three above gave them the best vegetable transplants. They predicted that the Vermont Compost Company soil, which was the most expensive option of the three, would produce the healthiest and strongest transplants. Emily Fagan was motivated to improve her practices and answer the long-term question of which soil is best for her farm. “Whenever I buy potting soil I never feel very certain about my choice because I don’t really know much about it, so I’m hoping that this trial will help me find some more information to make that choice with,” Fagan said.

For both tomatoes and broccoli, cooperators prepared seedling trays in a randomized, replicated pattern of potting soil varieties. Cooperators could use any starting tray and blocks they normally used in their system, as long as it followed those guidelines (Figure A1). They used three different soils in their experiment: Beautiful Land Products (#10), Cowsmo (Green Mix), and Vermont Compost Company (Fort Vee mix). All of the mixes are seed starter or germination medias. Management information can be found in Table 1.

At the time of transplant, cooperators measured 10 seedlings per replication for stem diameter, number of leaves, and seedling color. Stem diameter was measured in millimeters with a Vernier caliper. Number of leaves was calculated as an average across ten seedlings and rounded. Seedling color was ranked dark green, light green, and yellow-ish, which was coded for analysis as 1 = yellow-ish, 2 = light green, and 3 = green or dark green.

To evaluate differences in potting soil varieties for tomato and broccoli seedlings, we calculated Tukey’s least significant difference (LSD). If the difference in a seedling indicator for any two potting soil brands was greater than or equal to the LSD, we confirm that brand had a statistically significant effect on the indicator. On the other hand, if the difference in yield was less than the LSD, we consider the varieties to be statistically similar. We used a 90% confidence interval to calculate the LSDs, which means that we would expect our rankings to occur 9 times out of 10. We could make these statistical calculations for both cooperators due to the replication and randomization of their experimental design (Figure A1).

Before seeding broccoli and tomato, cooperators tested and evaluated each of the three brands of potting soil. For Breckbill and Fagan, the Cowsmo soil was the easiest and best to work with, especially for filling flats. For Yagla, the Vermont Compost Company soil was the best to work with in every category. Comprehensive evaluations are shown in Table 2. 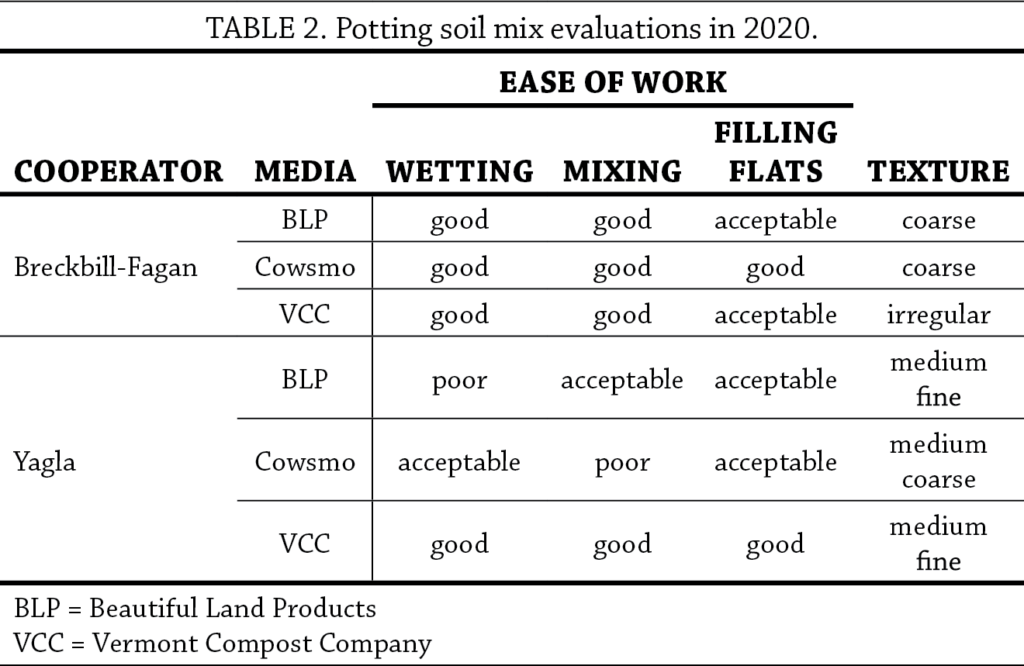 Germination rate was taken as a percentage of originally planted cells that germinated. Breckbill and Fagan only measured tomato germination rates at their farm, and found no significant difference in germination rate among the soils (Figure 1A). The broccoli at Yagla’s farm had a 100% germination rate regardless of potting soil (Figure 1B). Yagla’s tomato plants grown with Vermont Compost had a slightly better germination rate than the others, though we were not able to confirm this statistically.

FIGURE 1. Germination rates at Breckbill & Fagan’s and Yagla’s farms. A). At Breckbill & Fagan’s, because results did not differ by more the least significant difference (LSD) they are considered statistically similar with 90% certainty. We indicate these similarities with the same letter-rankings above the columns. B). We could not conduct statistical analysis for Yagla’s farm. 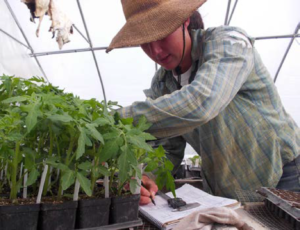 FIGURE 3. Number of leaves per 10 seedlings at Breckbill & Fagan’s and Yagla’s farms in 2020. Results that differ by the least significant difference (LSD) are followed by different letter-ranking and are considered statistically different with 90% certainty. BLP = Beautiful Land Products; VCC = Vermont Compost Company.

Cooperators were curious about which potting soils would work best for growing seedlings before transplant. They tested three products and Vermont Compost soil was expected to do significantly better than the other varieties due to higher cost. On Yagla’s farm, the Vermont Compost was the best soil to work with initially, and it had the highest germination rate, however it produced plants with thinner stem diameters and fewer leaves. Cowsmo had better color and good uniformity compared to Beautiful Land Products and Vermont Compost, but was one of the hardest for Yagla to work with. “I was pretty surprised overall that based on our measurements and observations it didn’t seem like Vermont Compost outperformed. They all seemed pretty similar,” Yagla said at the Cooperators’ Meeting in December 2020. 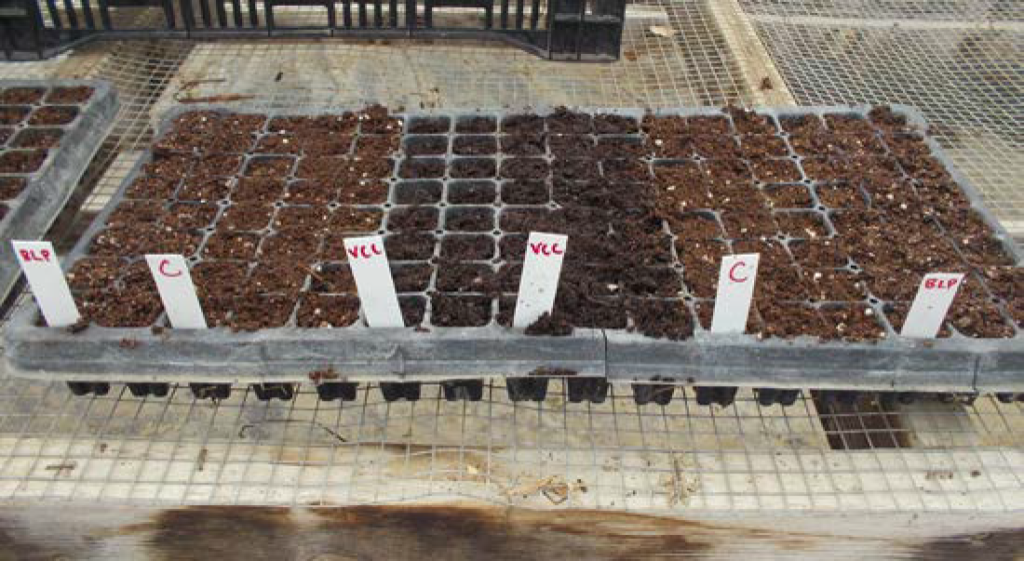 For Breckbill and Fagan, the three potting soils barely differed except with number of leaves, where Beautiful Land Products Mix #10 gave the best results. Through this trial, as well as learning what potting soils would work best for her farm, Emily Fagan also gained insight about growing tomatoes. “Paying closer attention to how we grow tomatoes in the greenhouse gave me new ideas about when to start them and how best to get enough to germinate,” Fagan said.

Cooperators now have the choice of what potting soil they want to buy based on the qualities they preferred. Yagla mentioned that the trial solidified his confidence in the quality of locally-owned Beautiful Land Products soil. “Before this trial every spring I would wonder if I should just pay the extra cost for Vermont Compost soil mix because it has such great reviews from organic farmers across the country. Now I don’t have to worry about that.” Yagla said. Fagan will continue buying Cowsmo soil, because the differences were not noticeable enough between potting soil varieties to warrant a change. “The other farmers in our neighborhood use it and we can order it together,” Fagan said. Even though the results had no impact on her practices, Fagan is still content with performing the trial. “Now I don’t have to wonder about potting soil!” Fagan said. 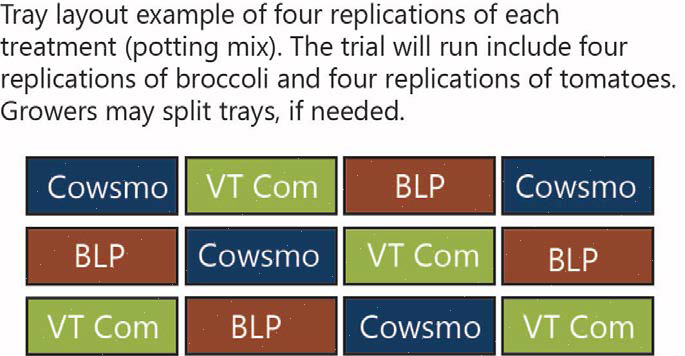 FIGURE A1. Example of experimental design used by all farmers in the trial, which included randomized replications of the products. This design allowed for statistical analysis of the results.