Reduced N Rate to Corn After Repeated Use of Cover Crops

Jack Boyer has been curious to determine if the soil health benefits of long-term cover cropping would allow him to reduce nitrogen in the corn phase of his corn-soybean rotation. Boyer conducted trials in 2019 and 2020 to compare yield and profitability of corn receiving his typical nitrogen rate (180 lb/ac) and a reduced nitrogen rate (130 lb/ac).[1,2] In the first year of research, Boyer found that reducing his typical nitrogen rate by 50 lb/ac saved him $26/ac and did not reduce corn yield. In the second year of his research, however, Boyer reduced nitrogen by 70 lb/ac, which resulted in lower corn yields and a $129/ac loss to his return on investment. Drought and the derecho windstorm during the second year of Boyer’s research likely influenced the results. Thus, in 2021, Boyer conducted the trial a third time with his fingers crossed for better weather conditions than 2020. This time he compared five nitrogen-rate treatments: 90, 110, 130, 150 and 180 lb N/ac.

To test the effect of N rate, Boyer arranged treatments in neighboring strips measuring 30 ft wide by 2,100 ft long and replicated all treatments at least four times (Figure A1). The 130 lb N/ac rate was actually replicated eight times (twice as many strips as all other N rates). He established treatment strips on April 1, 2021, by injecting anhydrous ammonia and all management operations can be found in Table 1. 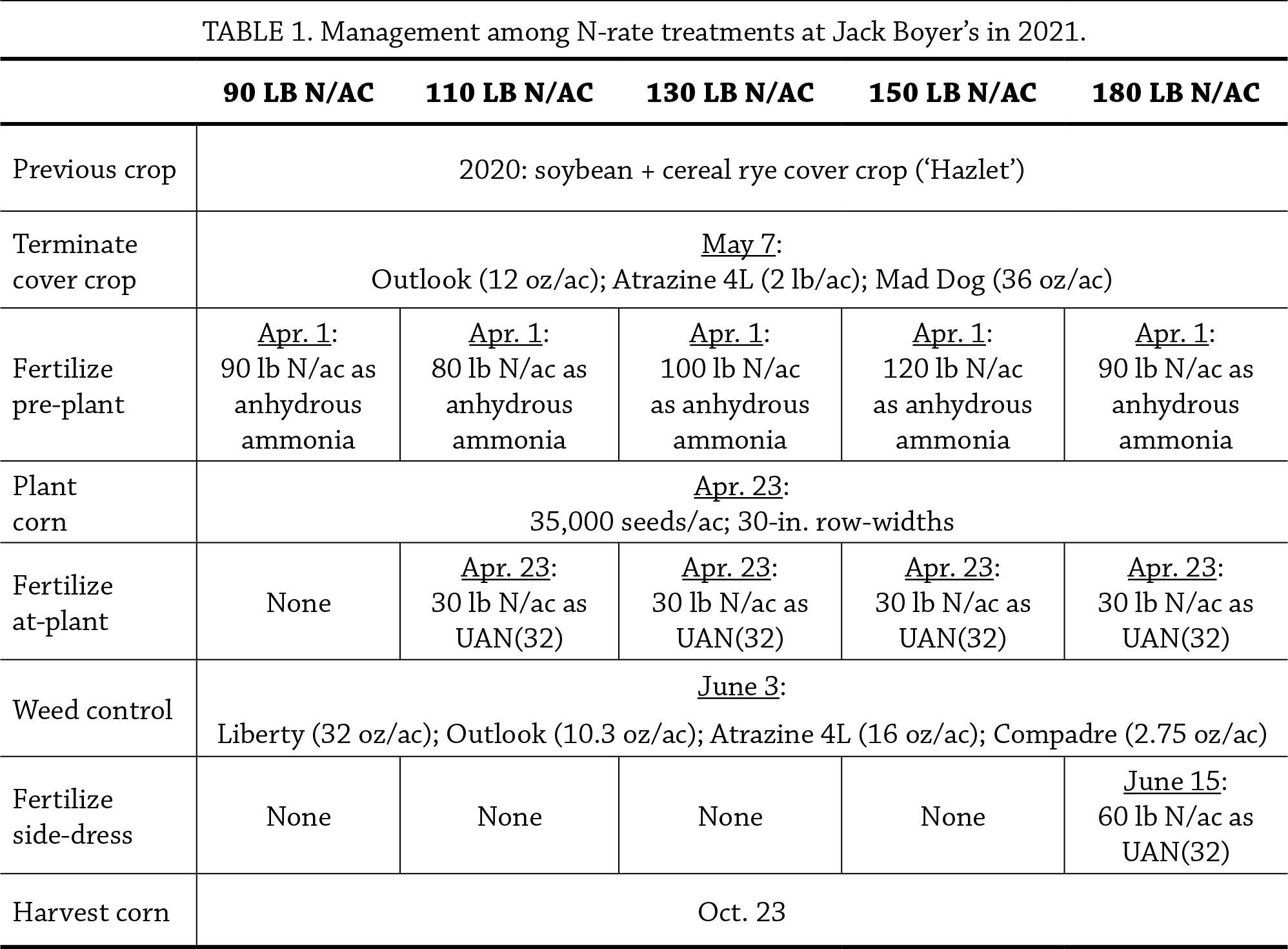 Staff from the Iowa Soybean Association collected cornstalk samples from the 90, 110, 130 and 150 lb N/ac strips only for end-of-season nitrate assay on Sept. 23, 2021. On Oct. 23, Boyer harvested corn from the center of all strips and recorded yields and percent moisture in each strip. Yields were adjusted to standard moisture (15.5%).

To evaluate the effect of N fertilizer rate on corn yield we plotted both linear and quadratic curves and chose the curve that best fit the response of corn yield to N rate. To evaluate the effect of N fertilizer rate cornstalk nitrate, we calculated the treatment averages for each measurement then used Tukey’s tests to compute least significant differences (LSD) at the 95% confidence level. The difference in average yields of two treatments is compared with the LSD. Differences greater than or equal to the LSD indicate the presence of a statistically significant treatment effect, meaning one treatment outperformed the other and the cooperator can expect the same result to occur 95 out of 100 times under the same conditions. A difference that is less than the LSD indicates the difference is not statistically significant and the treatment had no effect. 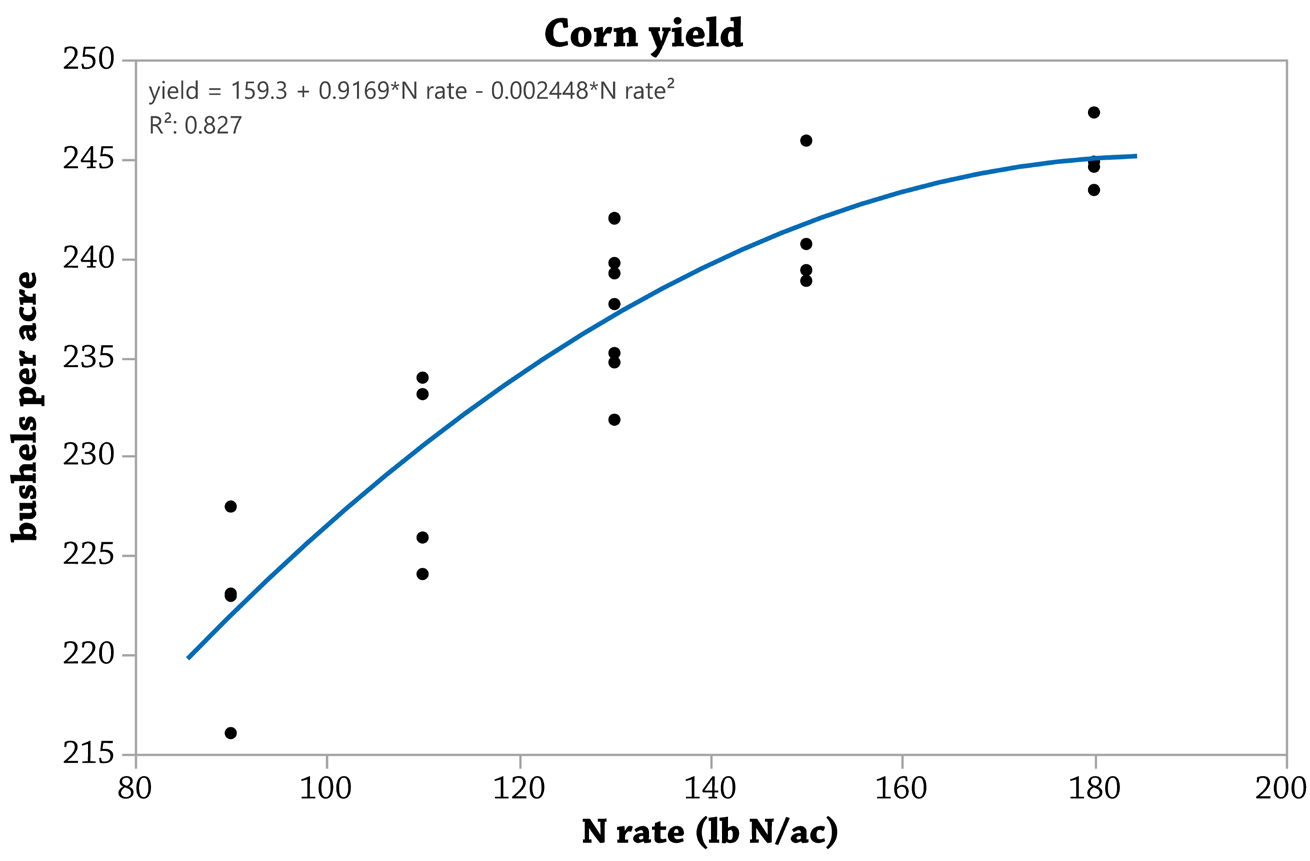 FIGURE 1. Corn yield response to N fertilizer rate at Jack Boyer’s in 2021. Points represent yields of individual strips receiving the different N rates. The curve was fit to the average yield at each N rate. The equation describes the shape of the curve, in this case a quadratic shape best fit the response of corn yield to N rate.

Maximum returns to applied N were achieved at the 150 lb N/ac rate (Table 2). Beyond this rate, returns diminished. In other words, though yield increased when increasing the N rate from 150 to 180 lb N/ac, returns to those additional 30 lb N/ac shrank. 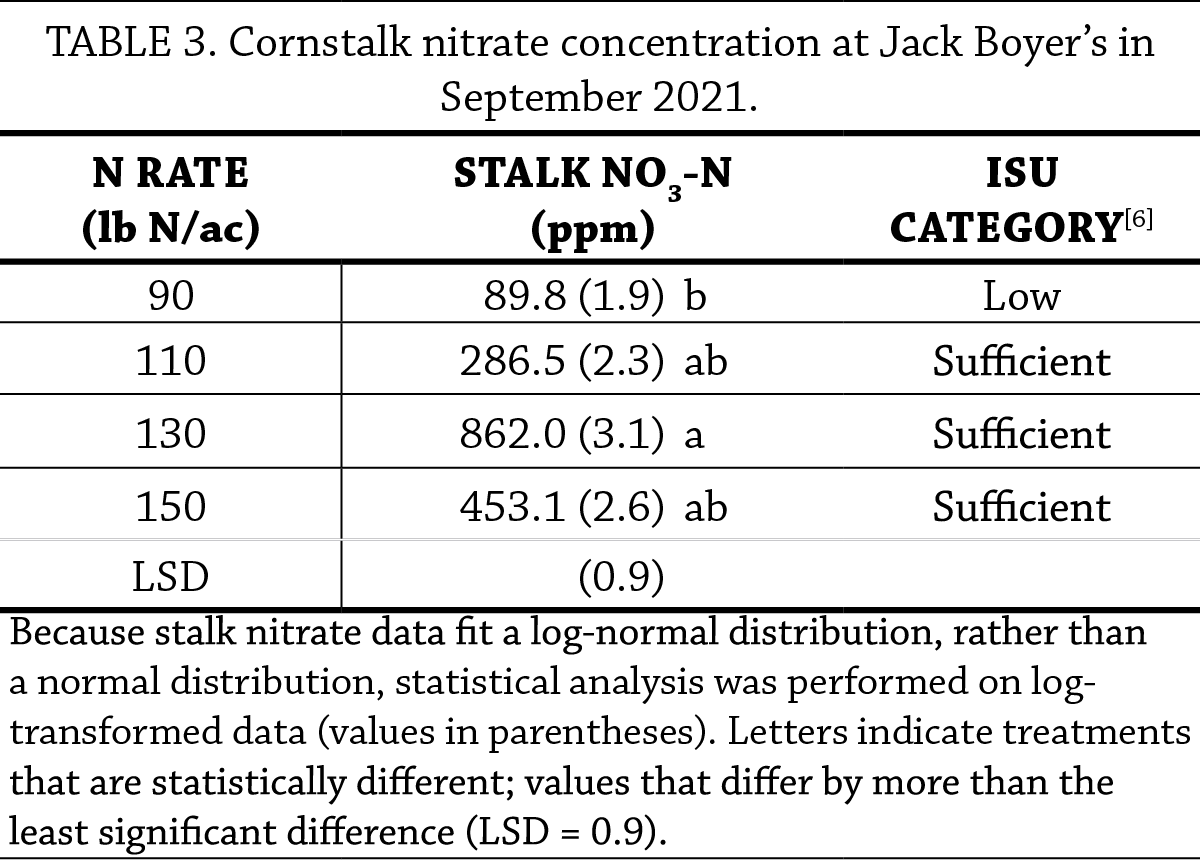 For three years in a row, Boyer has been able to reap similar corn yields, increased net revenue or both from N fertilizer rates lower than his once-typical rate of 180 lb N/ac. In previous years, these improvements came with the 130 lb N/ac rate; in the present trial, 150 lb N/ac. “Running the trials in consecutive years continues to show that reducing commercial N is possible,” Boyer said about his results. Still uncertain by how much he can consistently reduce N fertilizer applications to fields he has dedicated to soil health practices like cover crops, Boyer will continue to trial rates. In the face of rising fertilizer costs, trialing N rates is one way to investigate economic advantages. These advantages may be more likely to manifest in fields with a history of long-term soil health practices.

FIGURE A1. Jack Boyer’s experimental design consisted of at least four replications of each N rate (lb N/ac). This design allowed for statistical analysis of the data.

FIGURE A2. Mean monthly temperature and rainfall and the long-term averages during the trial period at Grundy Center, the nearest weather station to Boyer’s farm.[7]  Click to enlarge.

Grazing Rates: What Is a Fair Payment?