Cabbage is a cool-season crop, meaning it grows best planted during the cooler temperatures of spring for early summer harvest or planted later in the summer for fall harvest depending on the variety.[1] Farmers Hannah Breckbill and Emily Fagan of Humble Hands Harvest and Kate Edwards of Wild Woods Farm would like to harvest spring-planted cabbage later into the summer when coleslaw is at peak popularity among Iowa dinner tables. However, they know the hot temperatures that would accompany a mid-summer harvest could cause their cabbage crop to ‘bolt’ – a process in which a plant diverts its energy away from vegetative growth (leaves and main crop) and toward reproductive growth (flowers and seed), causing the crop to become bitter tasting. 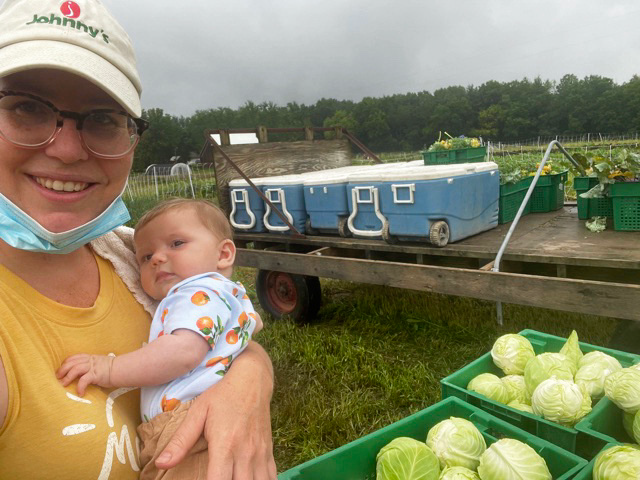 Cabbage varieties that are more heat-tolerant have been developed in the eastern United States; and over the last three years, several PFI farmers have conducted on-farm research trials to determine which from a selection of those varieties perform best in Iowa. In 2019, Farao was the preferred variety among the three farms that participated, and the variety Capture performed poorly in terms of yield and quality.[2] Joined by a fourth farm in 2020, the group tested Farao against four new varieties.[3] Results varied among farms, but Farao again tended to yield well and produce cabbage heads of good quality along with the variety Tiara.

Motivated to continue the trial a third year, Breckbill, Fagan and Edwards compared yield and quality of the best-yielding varieties from 2019 and 2020 (Farao and Tiara) – with the varieties Primo Vantage and Caraflex. The farmers at both farms highlighted the value of conducting this research to improve their growing practices and educate others. Edwards hoped to settle on “a definitive summer cabbage variety,” for her farm, and Fagan commented, “I’m aiming to grow consistently good summer cabbages.”

Cooperators designed a randomized, replicated trial comparing four treatments (cabbage varieties): Primo Vantage, Farao, Tiara and Caraflex. Cooperators seeded each cabbage variety in greenhouses on two different dates in spring 2021 (Table 1). Approximately 4 to 5 weeks after both seeding dates, cooperators transplanted seedlings according to the experiment design in Figure A1. For both succession plantings at each farm, cooperators replicated each treatment four times, resulting in a total of 16 plots per succession at each farm (4 treatments × 4 reps = 16 plots/succession). The randomization and replication of treatments allowed for statistical analysis of the data. 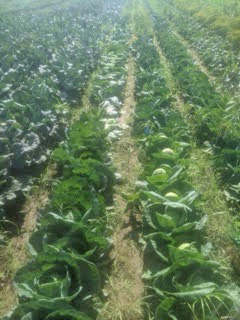 Cooperators harvested cabbage in July and reported the number of heads harvested from each plot as well as the total weight of cabbages in each plot (Table 1). We calculated the harvest rate – the percent of seedlings that yielded cabbage – for each plot by dividing the number of cabbages harvested by the number of seedlings planted and multiplying by 100. Cooperators also scored plots for quality issues, specifically head splitting, black rot and cabbage worms. Presence of these issues was scored per plot as “none,” “some,” or “much.” To create average scoring for quality, numerical values were later substituted as such: “none” = 0, “some” = 1 and “much” = 2. Therefore, a score of 0 indicates no presence of the indicated quality issue and scores closer to zero indicated better cabbage quality. Quality scores were not statistically analyzed.

To determine the effect of cabbage variety on harvest rate and yield, we calculated the average harvest rate and yield in each treatment then used Tukey’s tests to compute the least significant difference (LSD) at the 90% confidence level. If the difference in harvest rate or yield for any two varieties is greater than or equal to the LSD, we consider the treatments to have a statistically significant effect on harvest rate or yield and the cooperator could expect the same results to occur 90 out of 100 times under the same conditions. Conversely, if the difference in yield among varieties is less than the LSD, we consider those varieties to be statistically similar.

FIGURE 1. The percentage of seedlings planted that yielded cabbage (harvest rate) at Hannah Breckbill and Emily Fagan’s farm (A) and Kate Edwards’ farm (B) in 2021. Because the differences between any two cabbage varieties at each farm (and within each succession at Edwards’) is less than the corresponding least significant difference (LSD = 17.1% at Breckbill & Fagan’s; LSD = 12.3% and 33.0 % at Edwards’), cabbage harvest rates in each circumstance are considered statistically similar. Click to enlarge.

FIGURE 2. Cabbage yield at Hannah Breckbill and Emily Fagan’s farm (A) and Kate Edwards’ farm (B) in 2021. Where the difference between any two cabbage varieties within a succession and farm is greater than or equal to the corresponding least significant difference (LSD = 11.3 lb/plot and 13.4 lb/plot at Breckbill & Fagan’s; LSD = 13.0 lb/plot and 13.9 lb/plot at Edwards’), the yields do not share any similar letters and are considered statistically different at the 90% confidence interval. Where yield differences are less than the LSD, the yields share similar letters and are considered statistically similar. Click to enlarge.

Except for succession 1 at Edwards’ in which Primo Vantage yielded a significantly greater total weight of cabbages per plot than Caraflex, within successions at each farm all varieties performed equally well in terms of harvest rate and yield. Tiara tended to experience splitting and black rot symptoms at a slightly greater rate than the other varieties at both farms while Edwards noted Tiara cabbages varied greatly in size.

Breckbill, Fagan and Edwards chose to compare Primo Vantage and Caraflex varieties with Farao and Tiara after Farao and Tiara emerged as the preferred varieties among cooperators in two previous years of on-farm variety trials. All three cooperators were very satisfied with the results of this trial. Kate Edwards commented, “I wanted to fine-tune my variety picks, and I feel this trial confirmed I have a good selection of cabbage varieties to choose from.” Emily Fagan commented, “Having done this trial for three years in a row, I feel we have some pretty solid information to work with as we choose cabbage varieties in the coming years.” All cooperators felt conducting the trial led them to make new observations beyond the bounds of the trial. Breckbill & Fagan found that conducting the trial helped them to “pay attention to the timing of harvest of each variety,” adding, “this is really useful for us to know as we plan our crop rotations.” 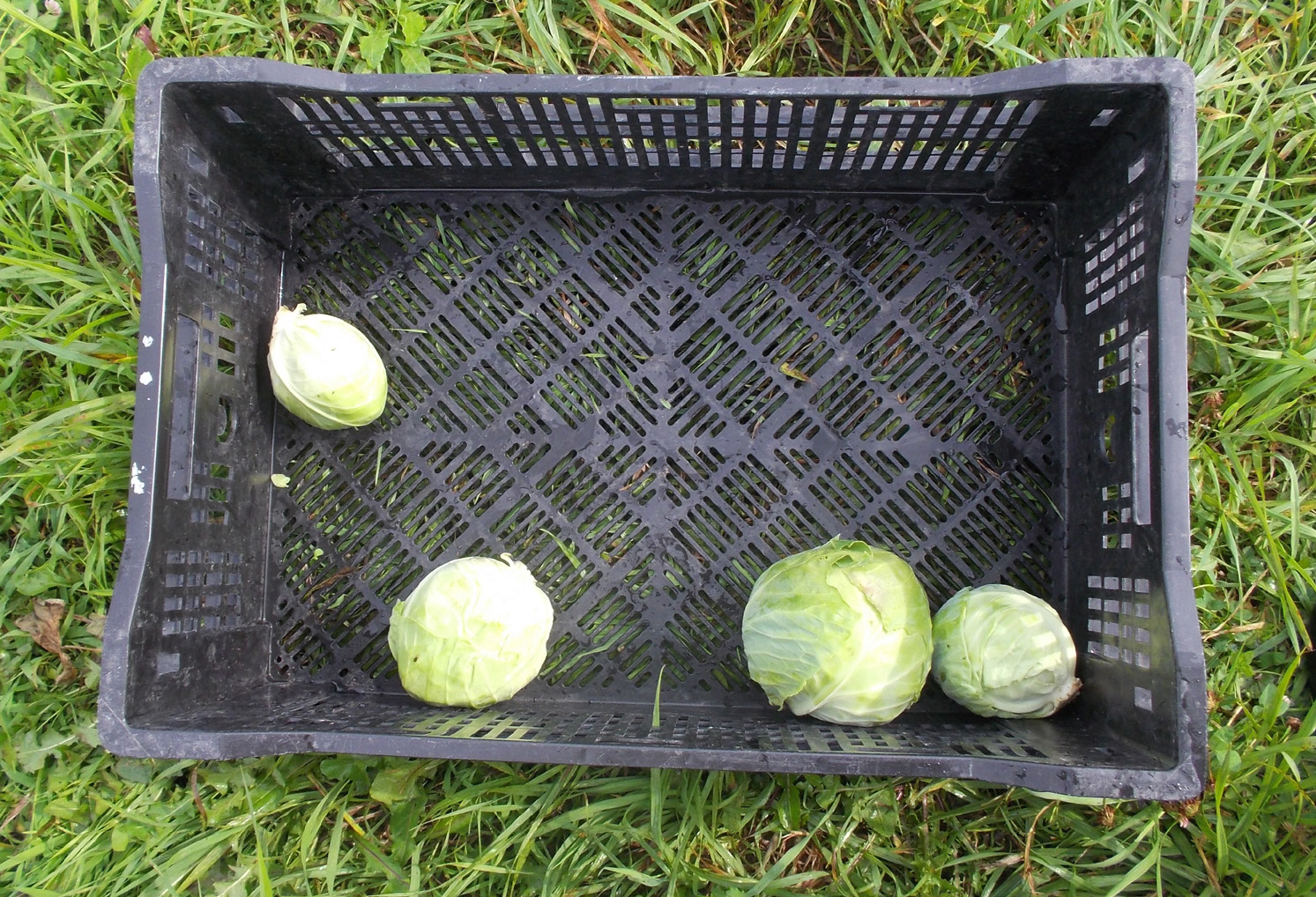 This photo of Tiara cabbages at Hannah Breckbill and Emily Fagan’s farm was taken when they conducted the trial in 2020. The variability in head sizes confirms Kate Edwards’ observations this year. Photo taken summer 2020.

FIGURE A1. Example of experimental design used by Breckbill, Fagan and Edwards, which included randomized replications of the cabbage varieties. This design allowed for statistical analysis of the results. Click to enlarge. 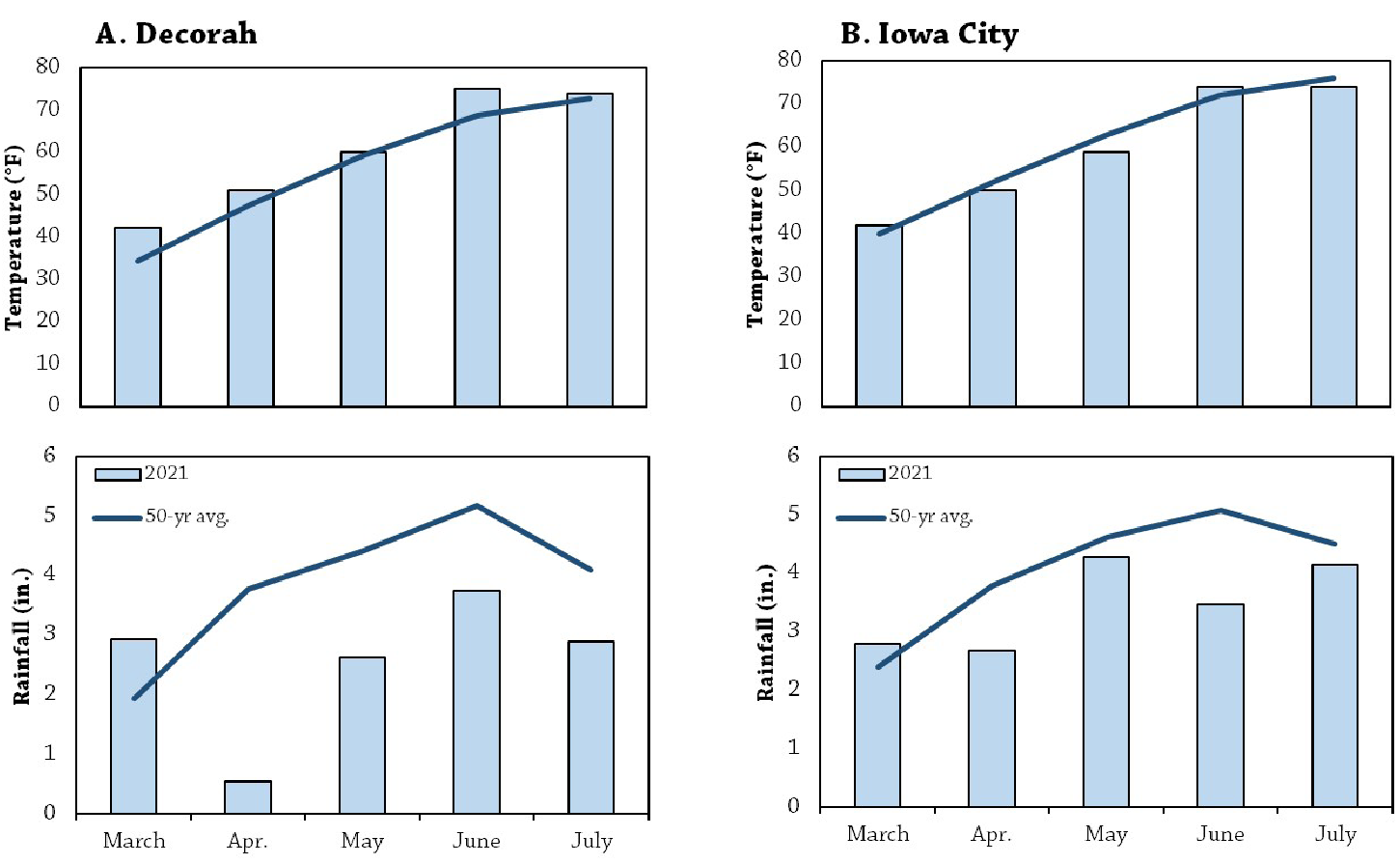 FIGURE A2. Mean monthly temperature and rainfall during the study period and the long-term averages at the nearest weather stations to each farm.[4] A) Decorah (Breckbill and Fagan, about 10 miles away); B) Iowa City (Edwards, about 8 miles away).  Click to enlarge.