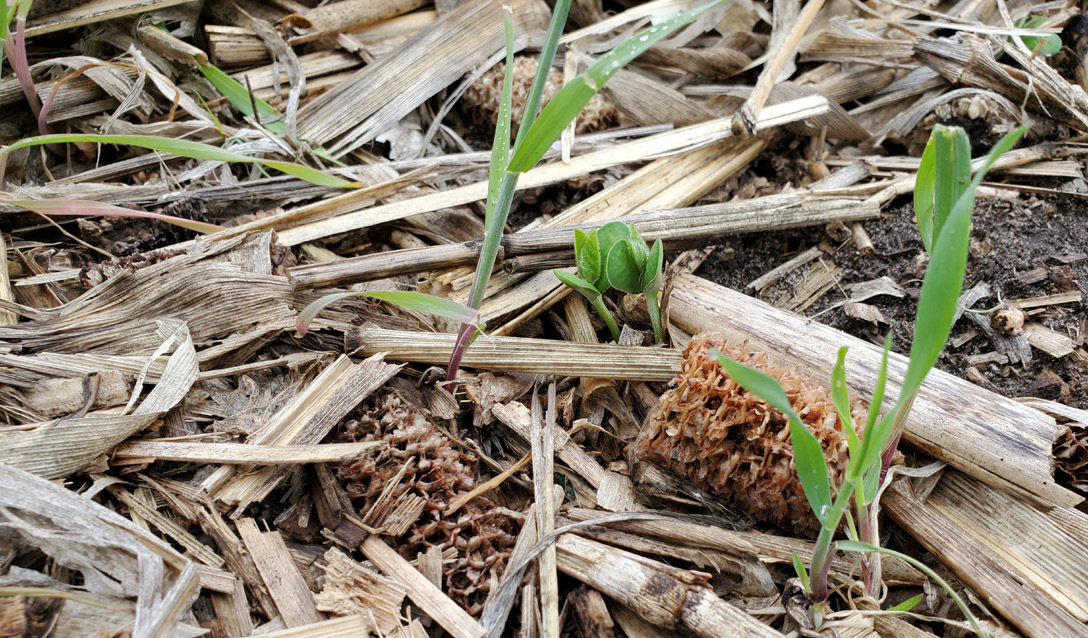 Two weeks after planting, soybeans in Sloan’s trial were growing alongside cereal rye.
Photo taken May 19, 2021.

Terminating a cover crop after planting soybeans is standard practice for Dick Sloan, but he wanted to validate its benefits to his operation with an on-farm research trial. The objective of the trial was to compare weed pressure, soybean yield and profitability between two cover crop termination dates relative to soybean planting:

Sloan commented, “I want to confirm that my normal practice of delaying cover crop termination in soybeans is advantageous for weed control and soybean yield.” His hope was for others to “realize that adding cover crop carbon to the early part of the soybean growing season scavenges deep soil nutrients and leaves them near the surface where they feed soil life and the soybean crop through the summer.”

Sloan established treatment strips on Apr. 30 by terminating the cover crop in his near-plant treatment strips. He used a tank mix of Tomahawk (48 oz/ac), Corral Poly (1 oz/100 gal) and Chemsurf (1 qt/100 gal). Six days later, on May 6, Sloan drilled soybeans in all strips in 7.5-in rows and at a rate of 160,600 seeds/ac. Sloan then terminated the cover crop in his delayed treatment strips on June 1, using the same products and rates as he used to terminate the near-plant treatment strips. Treatment strips measured 45 ft wide by approximately one half mile long and were randomly arranged in pairs. Sloan replicated each treatment 4 times for a total of 8 strips (Figure A1). This arrangement allowed us to conduct statistical analyses to assess the effects of cover crop termination date relative to soybean planting date on weed pressure, soybean yield and profitability. 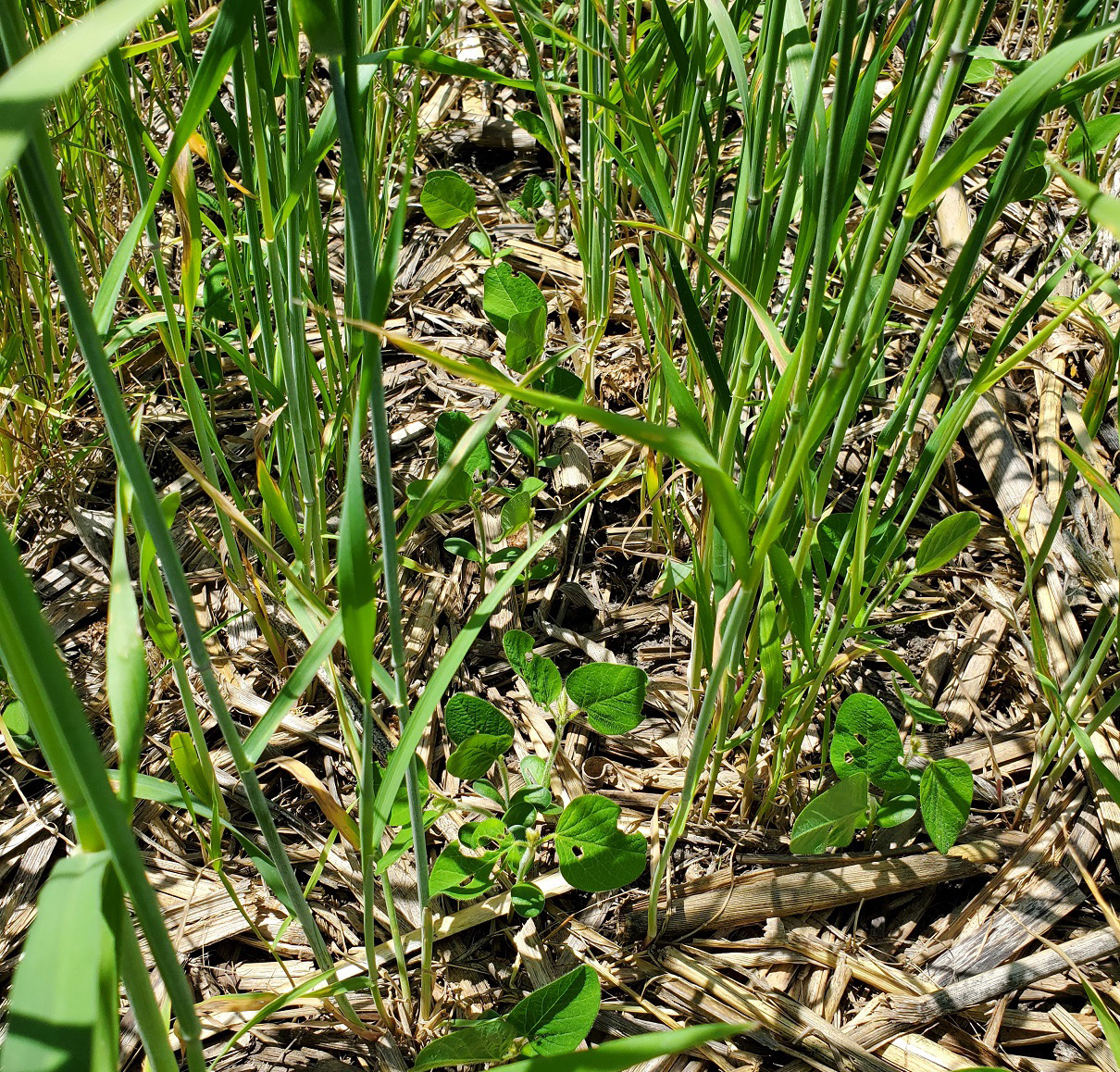 On June 29, Sloan sprayed all strips with a tank mix of Flexstar GT (3 pt/ac), Warrant (2 pt/ac), glyphosate Honcho K6 (2 pt/ac), Amesol and Chemsurf for weed control. He left a 90-ft strip across the end of each strip unsprayed to compare the effectiveness of the cover crop for weed control.

Sloan attempted to sample cover crop biomass; however, the absence of adequate biomass at the time of sampling his near-plant strips (May 29) prevented him from measuring and comparing biomass. To sample weed pressure, Sloan counted the number of weeds inside a 45-in.-diameter hoop (11 ft2) from three random locations in each strip on June 30. He harvested soybeans from the middle 25 ft of each strip on Oct. 16 and recorded yield and percent moisture for each strip. Yields were adjusted to standard moisture (13%).

To evaluate the effects of cover crop termination date on weed pressure and yield, we calculated treatment averages for each measurement then used t-tests to compute least significant differences (LSDs) at the 95% confidence level. The difference between each treatment’s average of a given measurement is compared with the LSD. Differences greater than or equal to the LSD indicate the presence of a statistically significant treatment effect, meaning one treatment outperformed the other and Sloan can expect the same results to occur 95 out of 100 times under the same conditions. A difference that is less than the LSD indicates the difference is not statistically significant and the treatment had no effect.

Sloan experienced very little weed pressure in both treatments (Figure 1). At the end of each strip, Sloan left a 90-ft length unsprayed in order to visually gauge the effectiveness of weed control from both cover crop treatments. In photos of the unsprayed area of each strip taken 2 days before harvest, weeds are visible in both treatments, but there appears to be a greater number in Sloan’s near-termination treatment strips. In the 8 years preceding this trial, the trial site was under continuous no-till and cover crops in a corn-corn-soybean rotation. This likely contributed to Sloan’s low weed pressure. 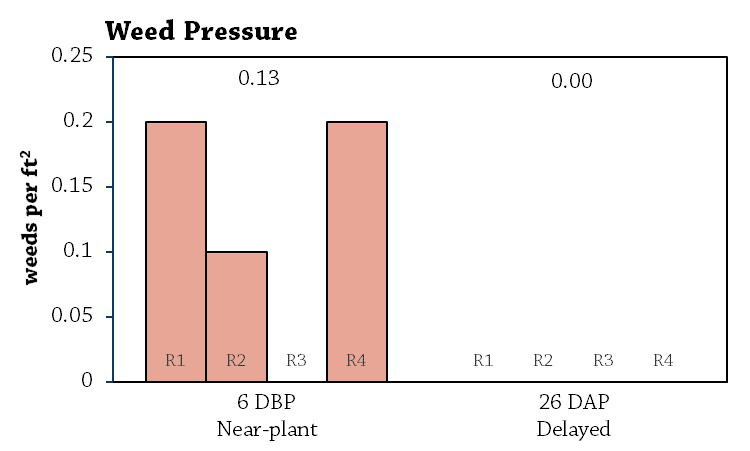 FIGURE 1. Weed pressure at Dick Sloan’s. Columns represent yields for each individual strip. The average yield of a given treatment is indicated above each group of columns. (DBP = days before planting soybeans; DAP = days after planting soybeans).

Soybean yield when terminating the cover crop 6 days before planting (68.4 bu/ac) was greater than when Sloan terminated 26 days after planting (65.1 bu/ac) (Figure 2). Weather data indicate rainfall was below average in the two months surrounding soybean planting, which leaves soybeans to compete with cover crops for moisture (Figure A2). Sloan commented, “We had a drier start to the crop year, so earlier termination of covers probably helped soybeans more than in a wetter year.” 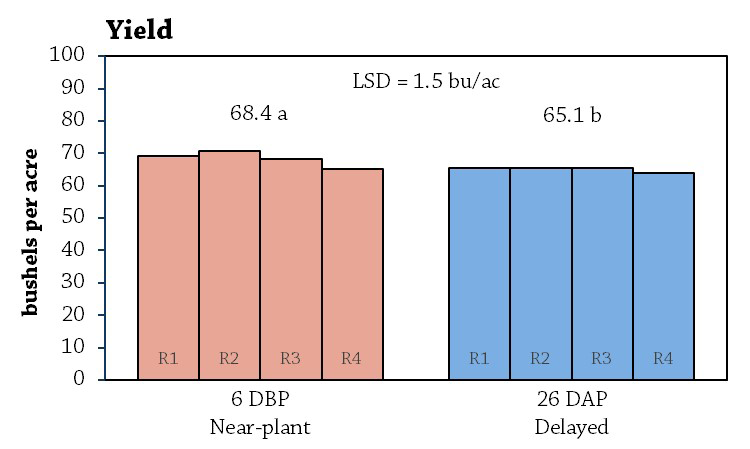 FIGURE 2. Soybean yields at Dick Sloan’s. Columns represent yields for each individual strip. The average yield of a given treatment is indicated above each group of columns. Because the difference between the averages is greater than the least significant difference (LSD = 1.5 bu/ac), the treatment yields are considered statistically different at the 95% confidence level. (DBP = days before planting soybeans; DAP = days after planting soybeans).

Sloan’s data showed that delaying cover crop termination until 26 days after planting soybeans compared to terminating six days prior to planting soybeans resulted in lower yield and a $39/ac loss in revenue. His results echo those of Tim Sieren, Sam Bennett and Jon Bakehouse’s, whose two earlier years of on-farm research led them to conclude that moisture management is key when delaying cover crop termination in dry conditions. Sloan reflected on the trial: “While soybeans can tolerate some early season competition with cover crops for light and moisture, and there is a benefit of improved weed control by letting covers grow longer, soybean yield can be reduced if covers grow too long.” Based on PFI on-farm research since 2015, farmers appear to have the most success when terminating a cover crop within one week of planting soybeans.

FIGURE A1. Experimental design used by Sloan. The design consists of four replications of each treatment (8 strips total) and allows for statistical analysis of the data. 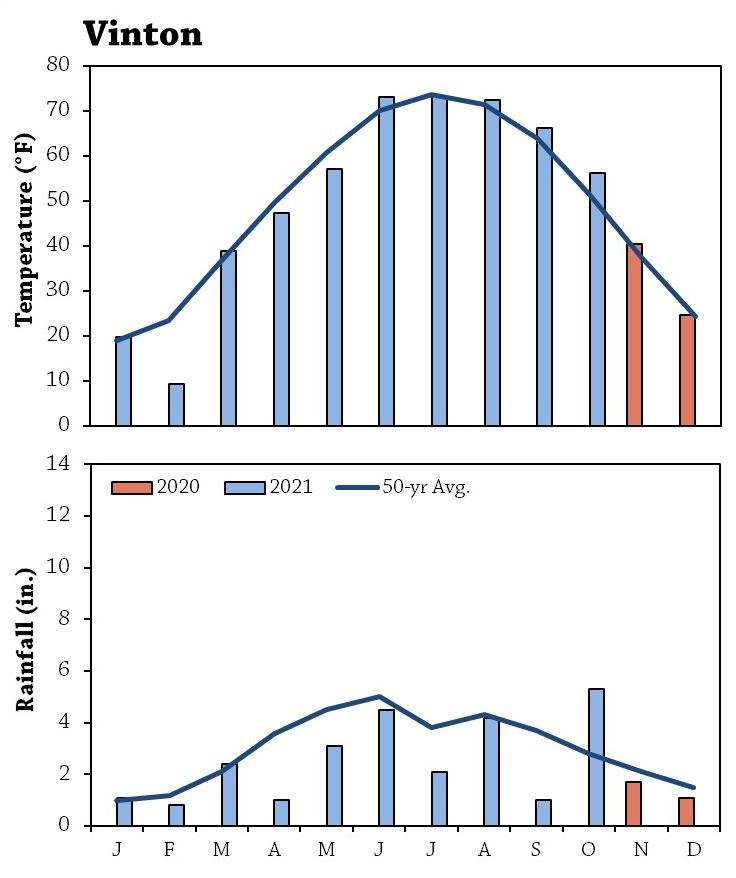 FIGURE A2. Mean monthly temperature and rainfall during the trial period and the long-term averages at the nearest weather station to Sloan’s farm (Vinton).