All across Iowa, the landscape is starting to be dotted more and more with green fields in winter time. Just a few years ago, very few Iowa farmers were using cover crops between corn and soybeans. Today, many farmers say they want to use cover crops to reduce soil erosion from their fields to protect their black gold. Other farmers, especially those located in the headwaters of the North Raccoon watershed – the water the feeds Des Moines Waterworks with drinking water for the residents of Des Moines – have reducing nitrates at the top of their mind.

Clean water is of highest priority and cover crops are one of the practices that have the biggest impact. Cover crops come with an upfront cost, but some farmers are using cattle to make it pay. On November 10th, a group of 35 farmers, landowners, and agency employees toured two farms near Lytton to see how Wes Degner and Ben Albright are finding the cash in their cover crops.

At the first stop, Wes told the crowd how he got started feeding cover crops to his cows, the cover crop species he was using, and how he makes it work for his operations. Wes raises corn and soybeans with his father Dennis, but also has his own cow herd. “Putting cows on cover crops makes it all worth it, and I probably wouldn’t do much cover cropping if I didn’t reap these benefits,” he says.

Wes adds, “I worked out the math and think I saved about $3,000 in feed costs by letting cattle graze the rye and corn stalks. The cost saving pay for the cover crop and at the same time we’re protecting water quality and fertilizing our fields.”

The tour then continued to the farm of Ben Albright. Ben raises cattle in several feedlots and has been aerial seeding and drilling cereal rye and oats into soybeans and corn. The first year he planted cover crops, he tried to bale them in the spring, but it didn’t go well because they were too wet. Grazing has worked much better and now he is in his second year of grazing cover crops.

Ben took questions from the audience about how to get cover crops established, when to put cattle out to graze, and how much of his feed ration he can cut back on when cover crops are available for grazing. While standing in a field of knee-high rye and oats, he also addressed concerns about soil compaction from cattle grazing crop fields.

A Lake City farmer in the audience, Mark Schleisman, who plants and grazes 1,000 acres of cover crops, chimed in with his thoughts on compaction,” I think we’ve been too scared about compaction; I’ve noticed it’s not been that big of a deal. The cover crop roots really decrease the presence of compaction and the fields that are grazed turn out to be my best looking fields.” 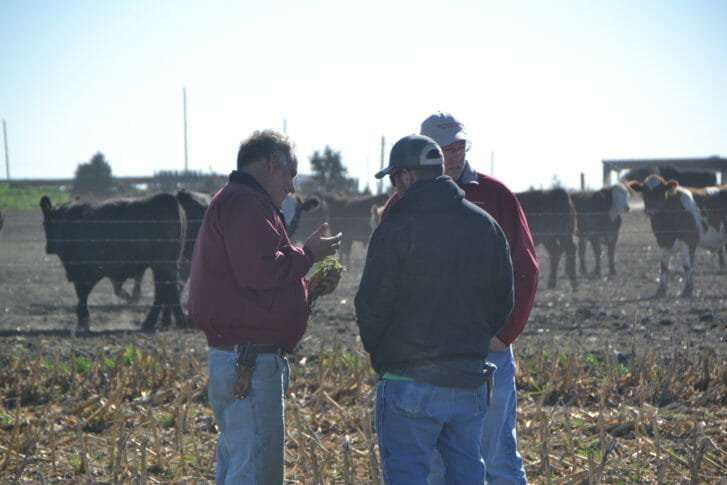 Both Ben and Wes conduct on-farm research with PFI in a project supported by the Iowa Department of Agriculture and Land Stewardship (IDALS). This project looks for water quality solutions that also help farmers investigate methods for making conservation more cost-effective. Four farmers in the North Raccoon watershed recorded the amount of growth their cover crop produced, and we assigned a value to this forage in order to estimate how much that cover crop is worth when put through a cow. In the fall of 2015, these four farmers saved $1,306 to $22,801 in hay or other stored feeds, by grazing their cover crops. In most cases, this more than pays for the upfront costs of cover crops – while feeding cattle, fertilizing fields, creating soil health benefits and improving water quality.

Wesley says, “even if we don’t get government cost-share for cover crops in the future, we now know we can continue planting and grazing cover crops because the costs are offset by feeding less hay to our cows.” To read the results of these farmer’s first-year trials, visit this link: Economic Benefits from Utilizing Cover Crops as Forage 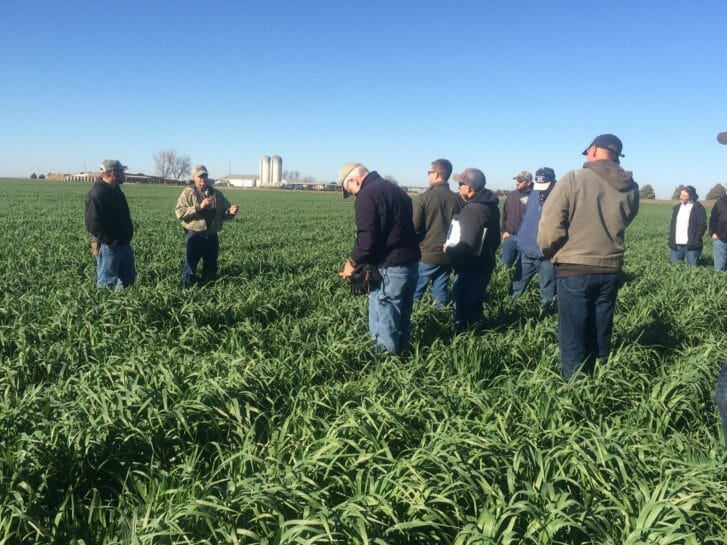 Thank you to our project partners – ISU Extension, Natural Resources Conservation Service, and Iowa Learning Farms – for supporting this field day and on-farm research project. We thank IDALS for funding this event.