Small grains are a unique crop in the Midwestern system because they are harvested early – around July – leaving the field open for different field operations and cover crops. This longer window makes it possible to grow a legume cover crop that can synthesize nitrogen and offset purchased fertilizer costs for the following crop in the rotation.  But farmers don’t have to wait until August to seed their legume, on our February small grains shared learning call we welcomed Keota farmer Tim Sieren and USDA Ag Research Station technician Keith Kohler to discuss frost seeding legumes, an alternative to waiting until after small grain harvest to establish the cover crop. 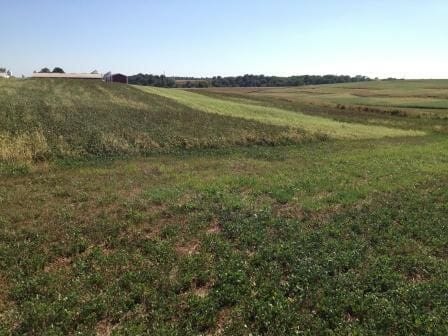 Flowering red clover established via frost seeding into a rye cover crop. Between clover plants you can see the brown of the rye residue decomposing.

“The name ‘frost’ seeding is actually a misnomer,” Keith begins. “It’s really a ‘freeze thaw’ seeding where you want the seed out there as the season warms up.” In early spring as the days begin bouncing back and forth between freezing and warmer temperatures, the ground contracts and expands with the changes, working a seed laying on the soil into the ground. So, if you get a small sized legume seed out there at the right time this natural cycle will do the work of planting it for you. It’s the ideal method for planting clover or alfalfa into an established winter small grain like rye or winter wheat so that the crop isn’t disturbed and can be used ahead of spring small grain planting too.

Keith targets the last 20 days of March for his frost seeding when the following conditions are met:

This formula gets you out in the field while the ground is firm enough to avoid wheel traffic issues and at a time when the seed will stay in place where it’s broadcast to achieve an even stand.

When it comes to equipment, there’s a lot of ways to get that seed out there once the conditions are right. When Tim was first broadcasting legume seeds at a small scale into pastures and waterways he used a broadcast seeder mounted on the back of a four-wheeler. But, “the first year I did 20 acres it was too much to do on the four-wheeler. I added a grass seeder attachment to my drill and put the drill down just enough that the seeding mechanism could turn and disturb the residue to get the seed down by the ground into the rye.”

Since those days Tim has now upgraded to a broadcast seeder that mounts on the three point hitch on his tractor. “Biggest hurdle was trying to see where you’d been. You have to do parallel guidance or something so that you’re not running over where you’ve already been.” So good news, if you want to try this out this year, you probably don’t need to go out and buy any new equipment, but may want to consider upgrading if you want to do a larger number of acres more quickly.

Both Tim and Keith recommend 14-15 lbs of clover seed per acre otherwise weeds will overtake clover after small grain harvest. In their experience medium and mammoth red clover work well in Iowa for winter survivability so the clover would grow into the spring and be terminated before corn planting (a little more than one full year from when it was planted). Southern clover varieties like Southern Belle and Cherokee are less winter hardy and tend to winter kill in our climate, though they do survive through some winters. 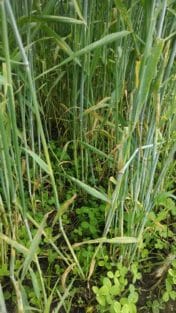 For Keith, the benefits of this system are that the legume is established as early as possible, maximizing nitrogen production and you’re never waiting to get out in the field to plant because it’s too wet. It also tends to be more reliable than establishing a legume in August after small grain harvest. Many a well-planned August cover crop has failed to establish due to lack of moisture, while frost seeding the legume in the spring establishes in a good stand nine out of ten years. The only potential threat to establishment is if you have an early (late February – early March) frost-seeding followed by a warm month so that the clover emerges and then it freezes hard again in early April.

Tim integrates livestock in his system and finds lots of benefits there by baling and grazing the clover. With the early frost-seeded establishment, he’s able to take a cutting of clover off the field in August after small grain harvest and thinks he could have gotten a second cutting around September 1st. He has also grazed the clover in the fall, but is sure to pull cows off of it early so the clover has time to recover before cold temperatures set in. And he figures that he got about 70 lbs of nitrogen from the clover towards the next year’s corn crop. You can read his research report for more information on the clover’s impact of the next year’s corn crop.

Another expert on frost seeding is Doug Alert who farms organically near Hampton, IA. To read about his equipment and best practices check out this blog on frost seeding. We also recently held a farminar on red clover as a cover crop featuring Dr Bill Dean. You can watch this presentation on our farminar archive.

Small grains shared learning calls are held the first Friday of the month on a topic relevant to small grains production or marketing. The next shared learning call will be March 2 from Noon – 1 p.m. on Marketing Small Grains to Breweries and Distilleries. To participate dial 641-715-3620 and enter passcode 357330# when prompted. For more information about small grains programming and other educational opportunities contact Alisha (alisha@practicalfarmers.org).