Inside the Home and Packhouse at Bode’s Moonlight Gardens

The last thing one expects during a field day is a tour through the farmers’ house! But to provide the full experience of their newly-built, combination home and vegetable packhouse, Beany Bode and Joanne Roepke Bode of Bode’s Moonlight Gardens graciously led the group through the packhouse and into their home. From 2004 to 2018 the Bodes lived in the aging farmhouse on the property, but they knew its time had passed. Knowing they were planning to build something new but needing to make-do, Beany kept the old place cozy using cast-offs from his construction jobs; the house has two colors of siding, four colors of shingles, and each winter was fully wrapped (yes, fully wrapped on the outside) with Ty-Vek paper. “It looked terrible, but it was much warmer!” admitted Joanne. But those days are behind them, and soon they will push their old house to the ground as they are fully moved into their new space. 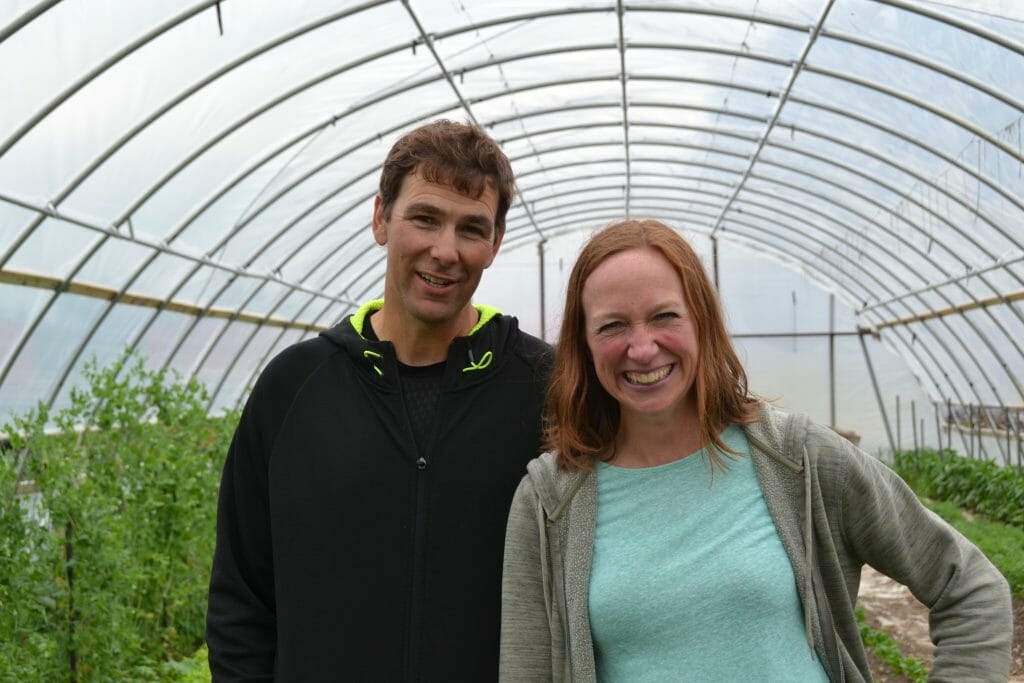 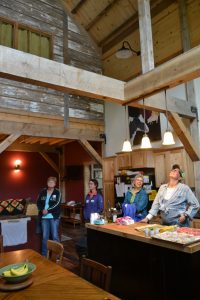 The living space is the west wing of the structure. An open staircase runs up the north wall, leading to a small lofted seating area in the northwest corner and bedrooms extending over the packhouse to the east end.

The Bode’s were initially interested in building a tiny house to go along with their future packhouse, but as they kept looking, eventually they decided to build them as one, and ended up with a fairly large house and large packhouse. “Our life and our work are very intertwined, so being able to move quickly between the two spaces is very handy.” They modified the 24′ x 50′ Ponderosa Country Barn House plan with 12′ lean-to’s from Sand Creek Post and Beam, which gives Joanne, Beany and their three kids a 1,440-square-foot packhouse, germination room and walk-in cooler, and a living space with 1,440 square-feet on the ground and approximately 840 square-feet on the second floor. In addition to making changes to the plan itself, they added 10 feet to the west end, to make the footprint 48 feet x 60 feet. 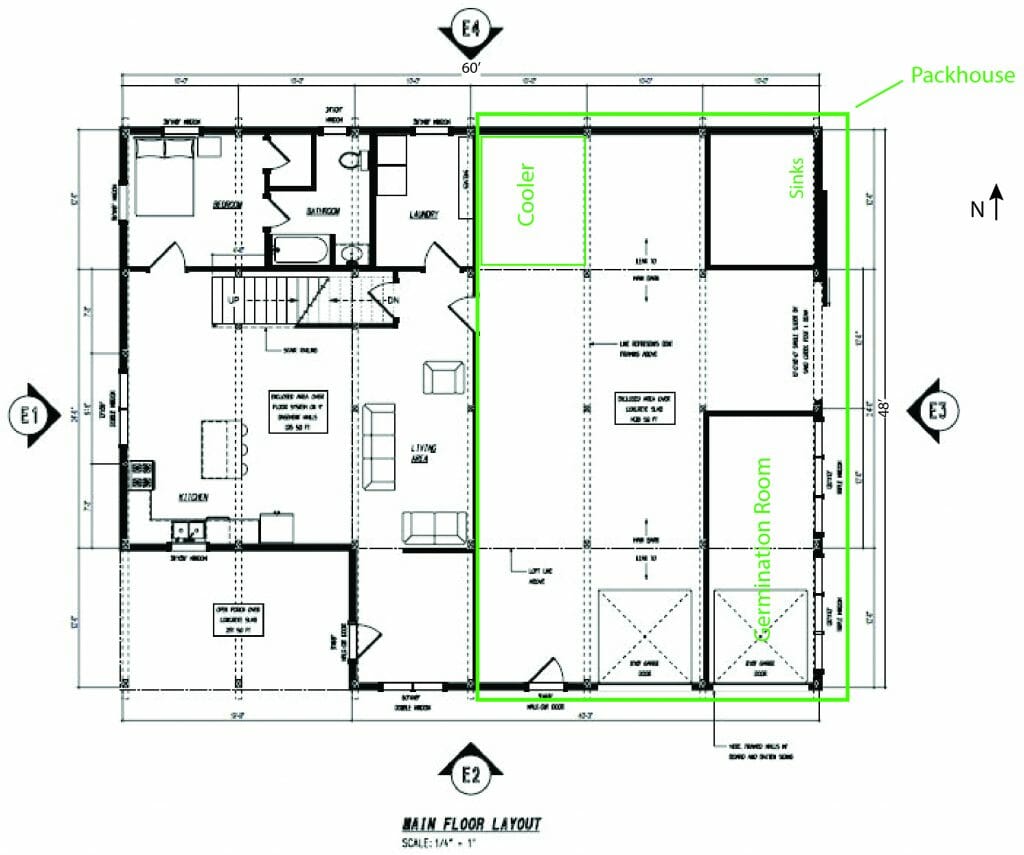 Ground floor plan of the Bode’s combined house and packhouse.

“We really don’t want to get bigger. I like the size we’re at, where we can do most of the work by ourselves, with our kids and with a couple friendly volunteers,” says Beany. In addition to the farm, Beany and Joanne work part-time off the farm; Beany teaches at Bishop Garrigan high school, works construction in the winter, and farms corn and beans with his family. Joanne is the public relations manager at the hospital. The Bodes live near Beany’s parents’ farm, and being involved in the community and connected with local businesses has brought both people and parts to the farm. “A lot of little pieces finally got put together that had been derelict, picked up from different places and sitting in our shed waiting.” Now they are history intertwined on the Bode’s farm. 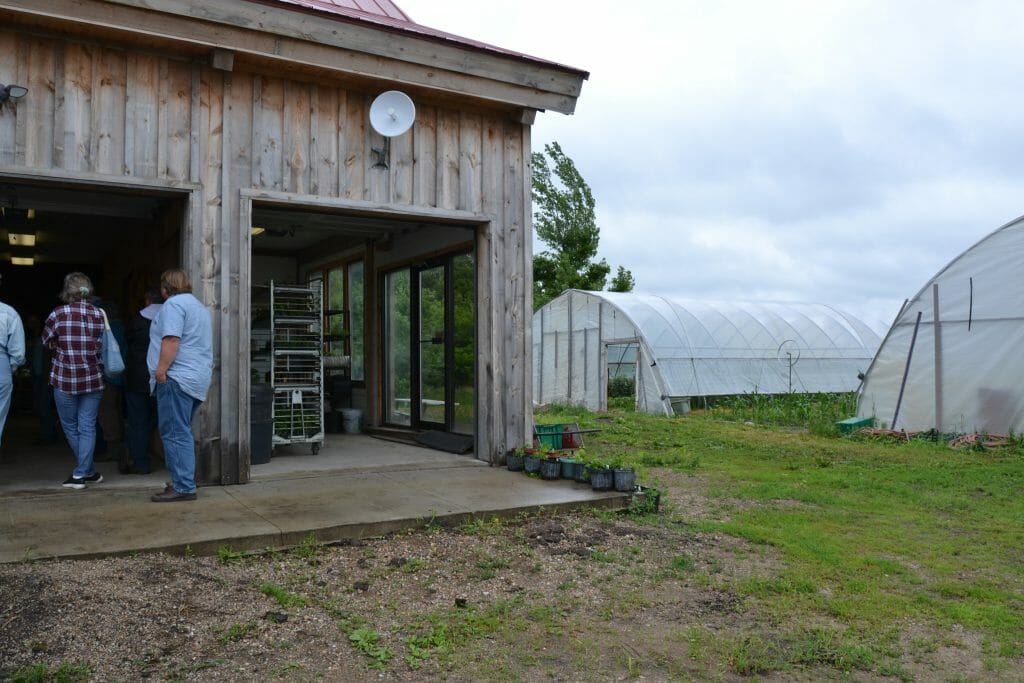 South view of the packhouse: The garage door on the left enters to the main packing space; the right garage door is the germination room.

The west windows  (below) on the germination room came from an old Casey’s store that was getting demolished. Beany: “They had them on the corner – cheap. I happened to be coming back with the big pumpkin trailer, so I pulled over, bought it, threw it on the pumpkin trailer, and put it on the house.” 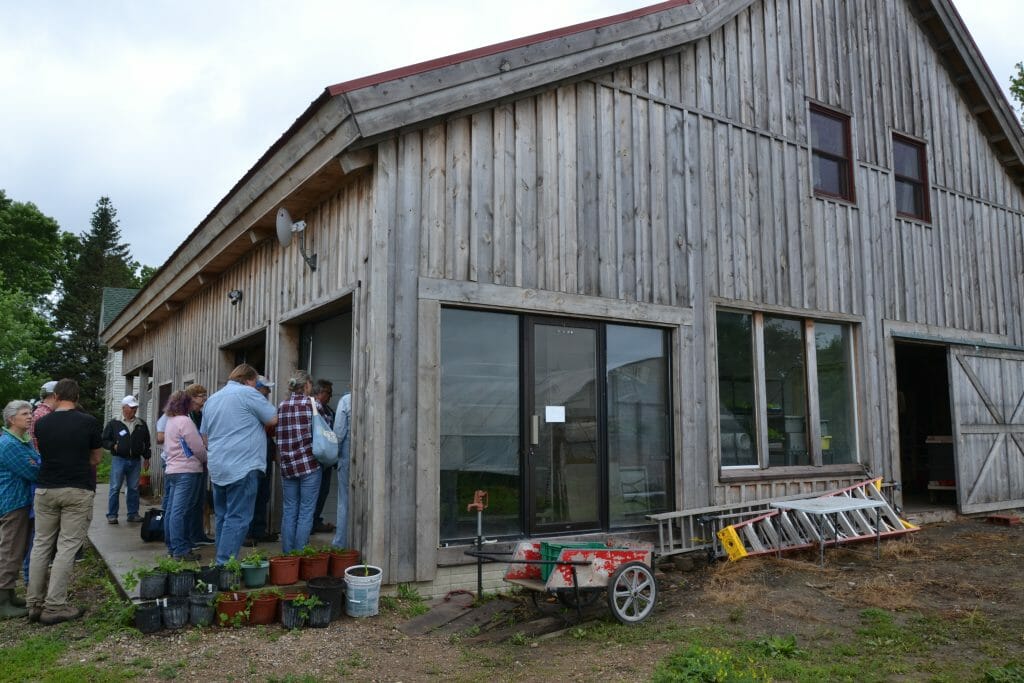 Southeast corner of the packhouse and house. Attendees look into the germination room, which has a door through on its north wall to the washing area. The sliding barn door on the right side of the photo is the main door where harvested vegetables enter to be washed.

The interior windows (below) between the packhouse and germination room provide the Bodes another way to adjust the temperature in both spaces. The windows came from the old trophy case at the school where Beany works, so they slide open and closed. 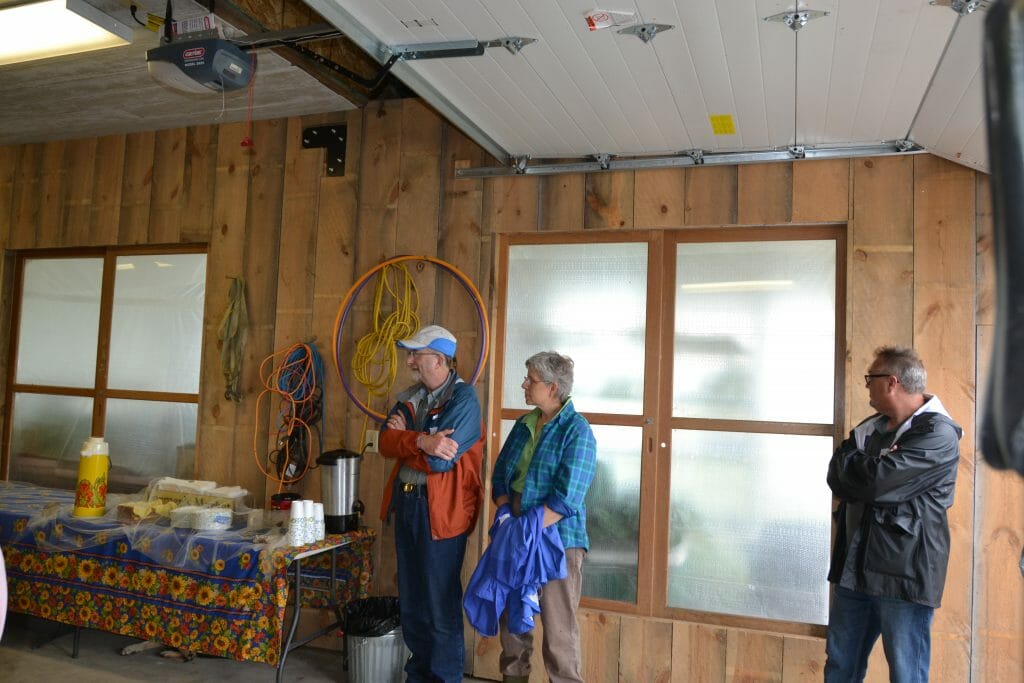 This space in the packhouse doubles as a car garage in the winter. The windows, which go through to the germination room, are old trophy case windows.

The rolling cart in the germination room is from Kriegers Greenhouse in Mason City, which closed in 2011. “I bought it at an auction there, and it sat in a Quonset building for years. But now we have a place for it and I’m thankful every day for that thing.” The size of the grow room works very well, particularly when the weather cooperates. This year Beany spent a lot of time maximizing the space and re-working the shelving for sunlight, watering and access to the plants. Though it wasn’t packed full during the field day, it had been packed full only days before.

“I would like for the germination room to be bigger, and to not have a house over the top of it so we could get better light. But if it was bigger, I would just take up more space. The size of it constrains in a good way – I just have to think more carefully about how I’m going to do things. I planted out some broccoli today that are probably going to be extra, and if I had more space in the germination room I would have had to plant out 400 extra broccoli, just because I had the space,” said Beany. Joanne echoed that the smaller size germination room is also more efficient for heating. 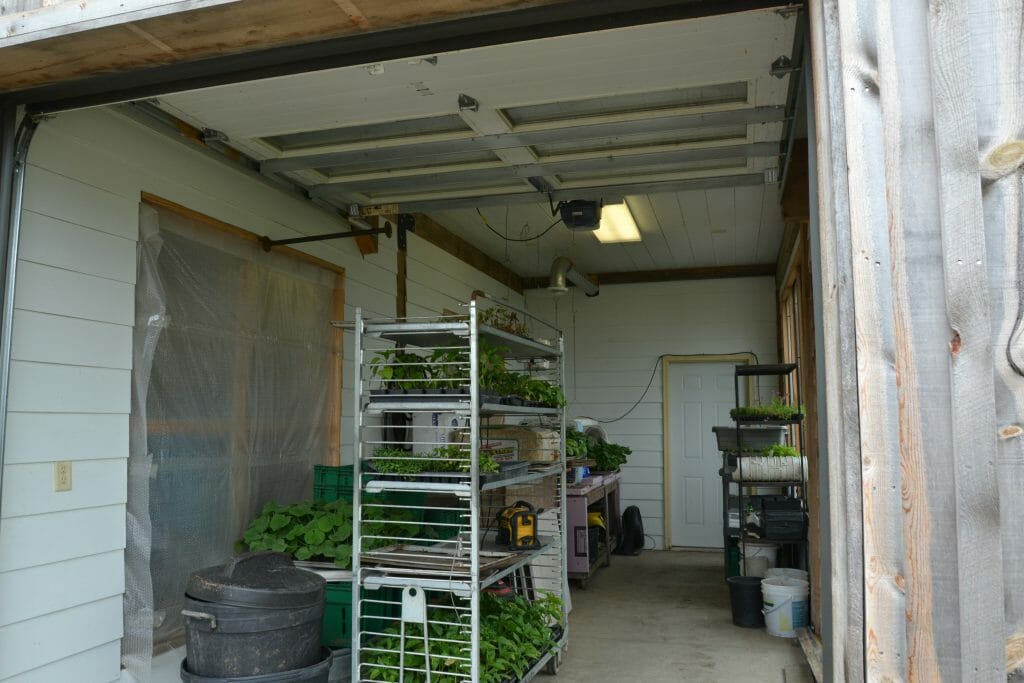 The roller cart in the germination room. 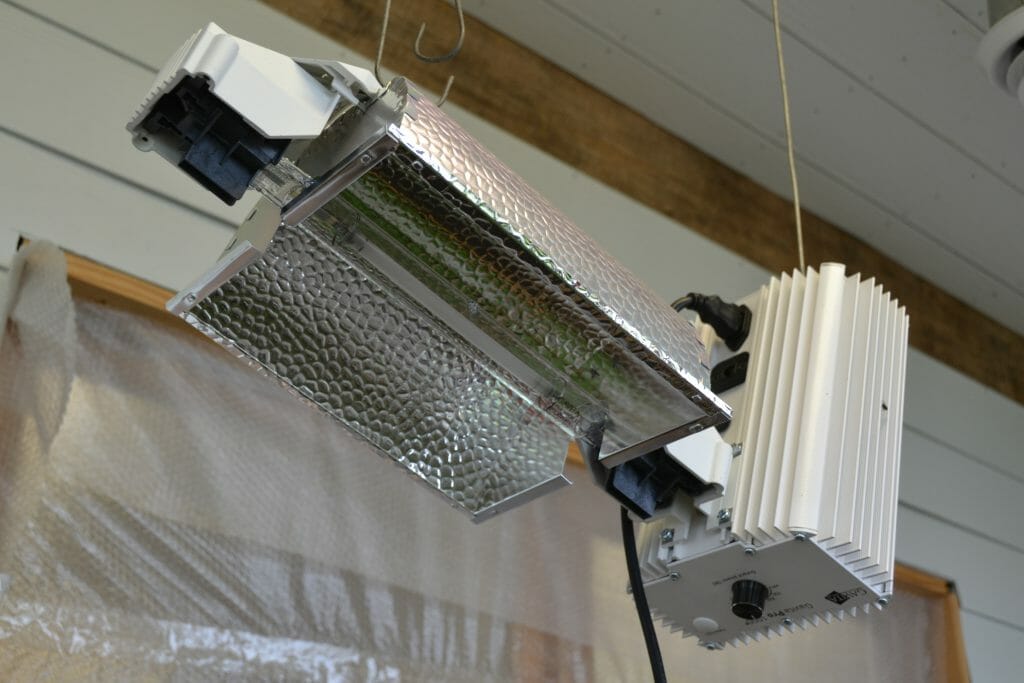 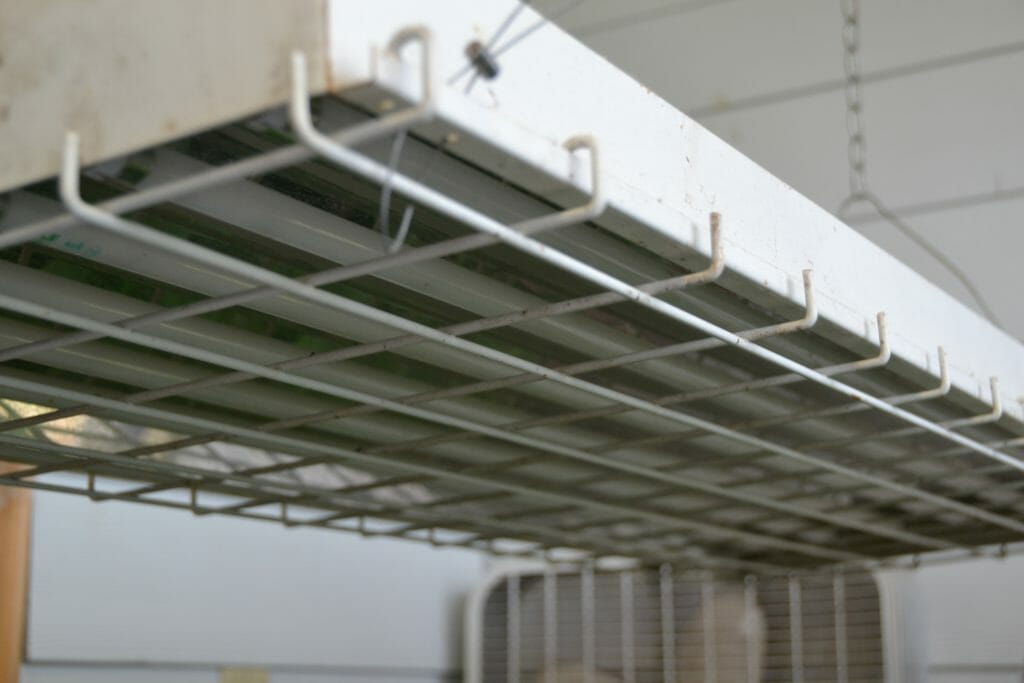 Prior to the new packhouse, the Bodes washed vegetables outside without plumbing, just hoses in the sink draining to the concrete. “The Bodes got running water last year!” said Joanne. An ISU capstone class chose the Bode’s farm as one of their project sites, and to their own surprise, the Bode’s found that the students had a better workflow plan for the packhouse than the Bodes themselves. All the steps of washing and packing are in line – there are no wasted trips around the packhouse carrying tubs and boxes. “We really like the way the workflow is; most of the vegetables come in the sliding barn door, are immediately at the sinks, then step through the packing and weighing station, and finally the cooler.”

All the load bearing in the building is on the post and beams, so all the walls are moveable. The packhouse has lofted storage spaces (one can be seen in the upper left of the photo below), which they access using a rolling steel staircase. Joanne likes these spaces particularly for long-term storage, like storing harvest containers during the winter. 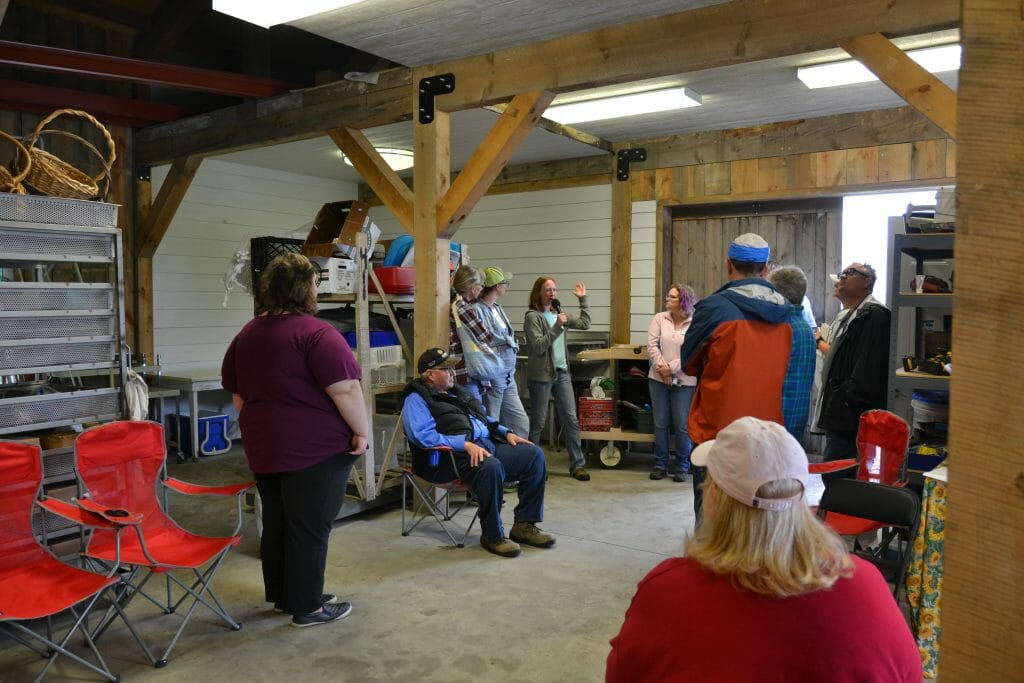 Interior view of the north east corner, which is the wash and pack area. Vegetables from the field come in the open door and immediately reach the sinks, behind Joanne (speaking with the mic).

To manage dirt going down the drain, Beany employs a couple methods. If there’s a lot of dirt in the sink, he siphons the dirty water out with a hose and simply runs it outside. If the sinks are really full of water and dirt, pulling all the plugs at once will usually provide enough force to push everything through. This is important, because the plumbing travels about 90 feet through the house until it reaches the septic on the other side of the house. “If I was going to do it again, I would go through the wall and add a valve to be able to drain the water straight outside as needed.” The packhouse also has a drain in the floor, which slopes toward the drain. They use a squeegee to push water toward the drain. If they were doing it again, Beany would prefer to grade the floor even more toward the drain.

Beany purchased exterior siding at a construction auction, which they used on the interior walls to be washable with a power washer, and flipped over the same siding to cover the ceiling. His one concern is that a food safety inspector might think the material is too porous. If that happens, Beany plans to build a wall around the wash space to separate it from the rest of the packhouse, and re-cover the walls of the wash space with an approved material. 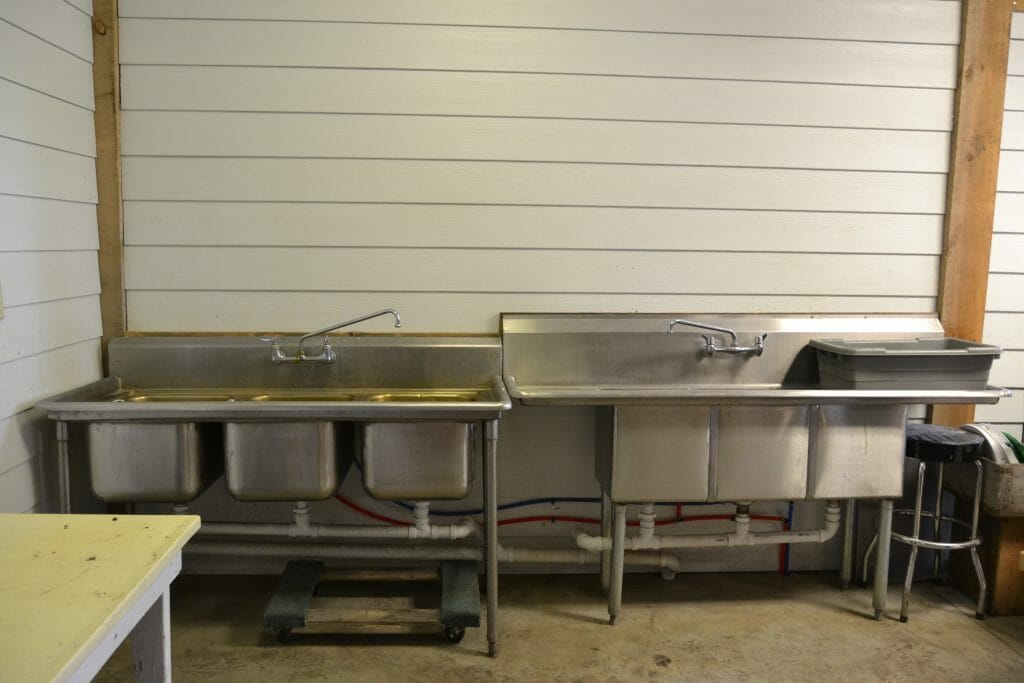 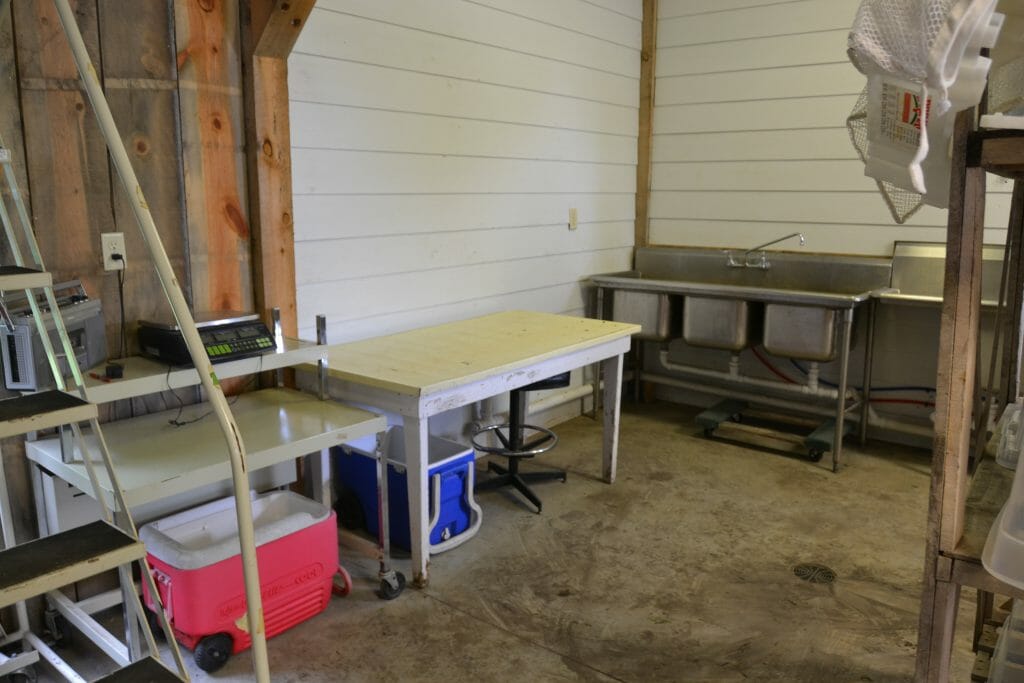 After washing, produce moves to the packing tables. The walk-in cooler is to the left of this photo. 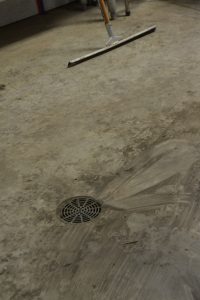 Bodes use a squeegee to push water to the drain on the graded concrete floor. 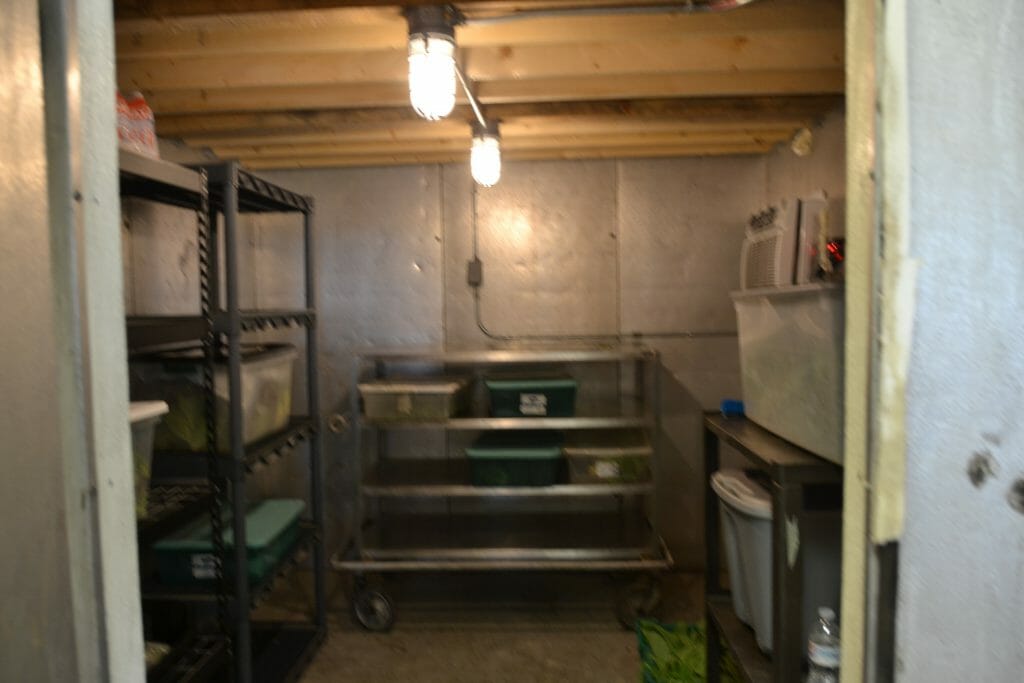 The walk-in cooler was from the old middle school in Swea City that was being torn down. It is cooled with an air conditioner and CoolBot.

Beany and Joanne also led attendees on a tour of their vegetable fields, high tunnels, pumpkin fields, and discussed their mentor relationship with John and Helen Scuffham of Scuffham’s Garden. Their story will be featured in the Fall 2019 issue of The Practical Farmer.