A Lifetime of Learning

Ron and Maria Rosmann reflect on PFI’s early years, impact and the future

Earlier this summer, PFI Swine and Poultry Coordinator Celize Christy asked Ron Rosmann if he’s fed fermented grains to his livestock. Ron’s reply was characteristic of his farming ethos: “No, but we’re open to trying anything.”

Ron has been farming near Harlan, Iowa, since 1973. Forty-six years later, his curiosity about new farming techniques remains as enduring as ever. For Ron, this curiosity and willingness to try new things are core attributes of Practical Farmers of Iowa and its members. “It means the world. It says that you don’t get close-minded and set in your ways,” Ron says.

“If there’s a good reason to do something differently that can make you more profitable as well as more environmentally sound, why not?”

Ron and his wife, Maria Vakulskas Rosmann, operate Rosmann Family Farms, a 700-acre certified organic, diversified crop and livestock operation that includes cattle, hogs, egg layers and a range of crops, and Farm Sweet Farm, the on-farm store spearheaded and run by Maria. Their three sons – David, Daniel and Mark – are all involved. Ron and Maria have been farming together since they were married in 1978, and together are the fourth generation of Rosmanns to farm the family land. Ron returned to the farm after graduating from Iowa State University with a degree in biology. His dad retired shortly after. 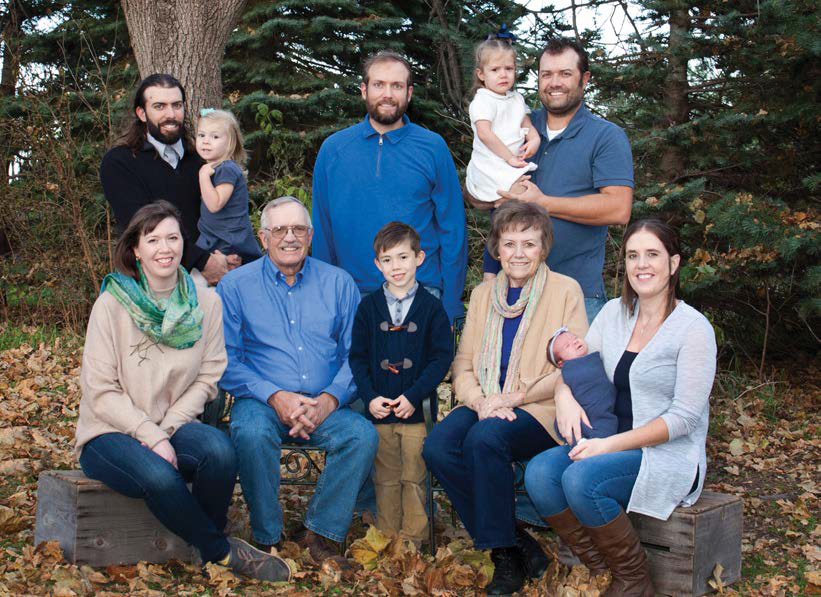 Maria and Ron met in the fall of 1974. Maria was a senior at Creighton University, and was covering a political event as an intern. “Ron came to my rescue when a politician spilled a drink on me,” Maria says. “We started dating after that.” While Maria was quite fond of Ron, she didn’t want to live on a farm and ended their relationship. “Three years later, we met out of the blue,” Maria says. They were married in 1978, within six months of reconnecting.

Ron met PFI co-founders Dick and Sharon Thompson in 1982, before PFI’s 1985 inception. The Thompsons were doing research with Rodale Institute. “What impressed me was the scientific validity of his on-farm research,” Ron says. Ron listened to Dick talk about ridge-till and research, and toured the Thompson farm. “I came home and told Maria, ‘His fields are cleaner than ours and he’s not using pesticides.’”

“If there’s a good reason to do something differently that can make you more profitable as well as more environmentally sound, why not?” – Ron Rosmann

Learning about the Thompson farm influenced the Rosmanns to quit chemicals cold turkey the next year. “We went back to using chemicals a little bit in the early ‘90s, because we were concerned about an increase in weeds,” Ron says. In 1993, Ron received a grant from Sustainable Agriculture Research and Education. With the grant, he compared ridge-till with and without herbicides on his farm. “Out of that trial, there was no yield difference between treatments,” Ron says. “That’s when we decided to do everything certified organic.”

The Rosmanns have been active in Practical Farmers since the beginning. “I went to the first meeting, where people identified a gap in university research,” Ron says. “It was during the farm crisis: What were universities doing to help farmers in terms of environment and economics?”

Ron recalls that around this time, New Farm Magazine put out a survey that asked what type of research farmers trust most. The options were university small-plot research, experiment station research, on-farm research and private company research. Ron says, “Responses showed that on-farm research, done on a working farm, was most trustworthy by a significant margin.”

A steering committee, led by Dick and Sharon Thompson and Larry Kallem, formed the organization in 1985. Their first board meeting and newsletter came out in 1986. Ron was vice-president of PFI’s initial board. “Our goal with PFI was to conserve our natural resources, do less harm to the environment and maintain our bottom line.”

Practical Farmers was important, Ron says, because farmers doing on-farm research were the heart and soul of the organization. “On-farm research provides data to help answer farming questions. On-farm research is exciting!” Ron says. “It keeps you young of heart and young of mind. You have data that propels you to decide what to do or not to do, versus a prescription where you just listen to somebody else tell you how to do it.”

Maria was involved early on by putting her communications degree to work. She sent out press releases for field days for a few years in the late 1980s. Maria says, “I have not had as much involvement in PFI as Ron, and that’s by choice.” Maria stayed home with three little boys as Ron went to many PFI meetings in the early days.

“The organization was started correctly,” Maria says. “Spouses were included as part of the farm from the beginning. It wasn’t Dick Thompson’s farm, it was Dick and Sharon Thompson’s farm. PFI was that way from day one.” This, Maria says, was a departure from the traditional way farms were viewed. “When my parents would come visit, they’d say, ‘We’re coming to visit Ron’s farm. Is that okay with Ron?’ Dick and Sharon really set the stage for inclusivity.”

“PFI has impacted everything about how we farm,” Ron says. “We’ve gotten to answer whether or not practices can work with on-farm research. We’ve gotten the courage to make changes by learning from other farmers who have gone through it before us.”

Maria adds a disclaimer about the farm’s ability to change: “Many farmers are constrained by renting ground, by being children of parents that are still farming. Ron’s father retired soon after Ron came back to the farm, providing Ron the ability to make decisions. Some farmers are in their 50s and 60s and waiting for their parents to retire so they can make decisions someday.”

Ron and Maria both feel it’s important to acknowledge the mentors they had when they were starting to farm. “There cannot be enough accolades for Dick Thompson,” Maria says. “For his ability to just be cool and lead, and know when to back away. For us to get along, but not go along. In his quiet way he knew how to be a fatherly type of leader.”

Ron credits several other PFI farmers with helping them as well. “Dan Wilson for hogs, Tom Frantzen for hogs and general advice. Vic Madsen for everything.” Maria adds, “Paul Mugge, because he’s brilliant.” “They’re all phenomenal individuals,” Ron says, “and we’ve maintained that back-and-forth through the years.”

Preparing for the Next Generation

Sons Daniel and David both farm with Ron. Daniel and his wife, Ellen Walsh-Rosmann, live next door. They have their own enterprises of chickens and crops, and also run Milk & Honey, a restaurant in Harlan, and FarmTable Delivery, a local food aggregator.

David lives 15 miles away in Avoca. His wife, Rebecka Tompkins-Rosmann, is a clinical psychologist at Creighton University. Their youngest son, Mark, currently lives in Washington, D.C. and works for the U.S. Department of Agriculture’s Foreign Agricultural Service on agricultural sustainability at an international scale. He has recently been assigned a post in New Delhi, India, and will move there in March.

The Rosmanns think they’re two or three years away from retirement, and are making progress on farm transfer plans. Their main goal? “How to do it equitably,” says Maria. “Along with that is how we choose to retire. We’re watching our classmates retire. My dad was able to enjoy retirement with my mom, and that was enviable.”

Ron adds, “We want to minimize our debt to David and Daniel, when they take over completely.” Progress has started. “We have moved to mutual consent,” Ron says. “We all agree on decisions. I don’t rule the roost.”

Maria has chosen to stay out of farm-related decisions. But she is the force behind Farm Sweet Farm, the farm store that sells food produced from Rosmann Family Farms along with other local products, specialty coffee, teas and organic products.

Ron would like to see more PFI emphasis on farm crop trials like those done in the early years. “There’s a lot of learning that larger operations can take part in,” he says. “Pesticide trials, fertilizer placement trials. We did it early on, but farmers doing these trials on their own farms can have a big impact.”

Ron and Maria like the direction Practical Farmers of Iowa is going. Maria says, “You haven’t lost your premise from where you started. PFI has gotten bigger, but has done so appropriately.” They like seeing the next generations getting involved. Their son David is now a PFI board member. Vic Madsen’s son, Eric, is taking a role and teaching at PFI events. “PFI is working on things that are so critical,” Ron says, “like beginning farmers, vegetable farmers and other kinds of ag.”

The Rosmanns were part of Practical Farmers’ formation, and 34 years later remain integral members today. Once mentees, now they mentor many. This summer, Ron and Maria held their 23rd field day. Ron plans to continue educating others. “I’d like to speak, to write, to travel,” he says. “Hopefully we can help other farmers not repeat the same mistakes we did. We don’t want to encourage them to do as we do, but to pick and choose what works for their farm. Don’t follow a recipe.”