Honored for a Commitment to Research

By Stefan Gailans and Tamsyn Jones

“Every farm is different, you cannot buy the answers in a bag,” the late Dick Thompson, Practical Farmers co-founder, was known for saying. He was referring to the ethos that drove, and continues to drive, PFI farmers to conduct research to seek solutions on their own farms.

Who better to answer questions than the farmers posing those questions? PFI’s Cooperators’ Program is made up of farmers who put in the extra effort to scientifically ask and address their questions (which are often the questions of other farmers, too!). To recognize the efforts of these farmers – and their contributions to farmer-led learning – Practical Farmers of Iowa established the Master Researcher Award in 2013.

The award honors those who have conducted at least 20 on-farm trials and hosted at least five field days with PFI to share the knowledge they have gained. Sharing research results, and sometimes showing research plots, at field days has been fundamental to PFI and the Cooperators’ Program over the years. Everyone learns when the successes, failures and challenges are honestly discussed. It’s why we frequently hear some version of “I let PFI cooperators struggle with things and figure things out before I try those practices on my own farm,” from attendees of PFI field days.

Most recently, PFI honored two farmers – Mark Quee of West Branch and Bruce Carney of Maxwell – with the Master Researcher Award for their extensive contributions to on-farm research and knowledge-sharing over the years. The awards were presented in December, during Practical Farmers’ 2019 annual Cooperators’ Meeting in Ames, where farmers and collaborators involved with PFI on-farm research gather to share results of projects and discuss ideas for the coming year.

Mark and Bruce are the first farmers to earn master researcher status since the inaugural batch in 2013. They join 12 other farms or individuals to have been recognized with the Master Researcher Award since its inception.

Mark Quee is the farm manager at Scattergood Friends School, a small Quaker boarding school near West Branch, about 15 miles east of Iowa City. The school’s farm includes 8 acres of organic gardens and orchards; about 30 acres of pasture used to grass-finish beef and lamb; a small flock of turkeys; a few heritage-breed Guinea hogs; and occasional broiler and laying chicken flocks. Since 2009, when he joined the Cooperators’ Program, Mark has conducted 25 on-farm trials and hosted six field days. 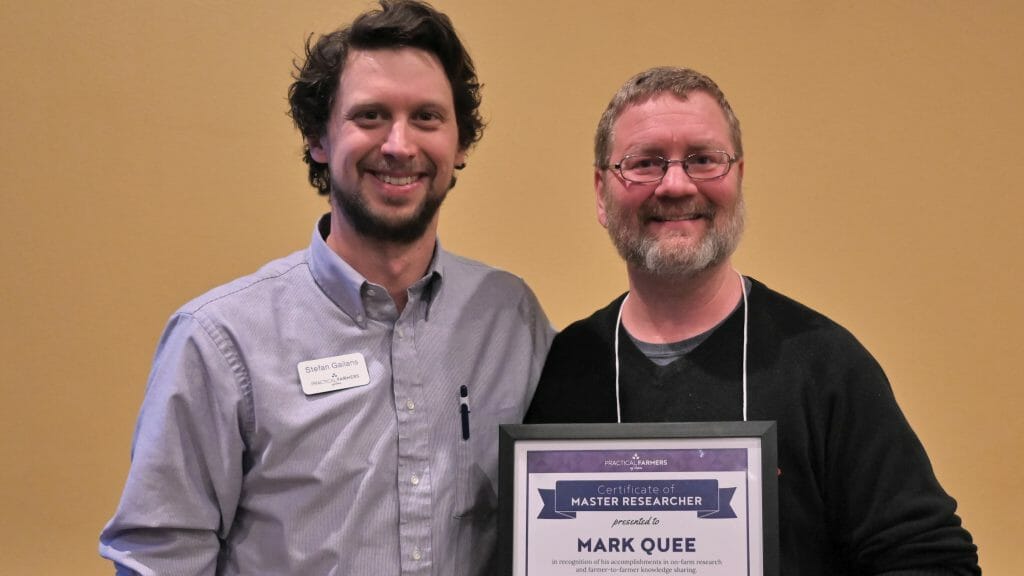 Stefan poses with Mark Quee after presenting Mark with the Master Researcher Award in December.

“Weed suppression results were inconclusive – but as often happens, there were unexpected findings.” – Mark Quee

“Mark’s spirit of trying new things and not being satisfied with just doing what has been done is very much appreciated,” says Tammy Faux, who farms near Tripoli and introduced Mark at the award ceremony. “One of the things I have learned so much from Mark is how to value collaboration and shared endeavors, so it is no surprise that Mark is so involved with PFI.”

“My very first PFI Cooperators’ Program research trial was in 2009, when we looked at the weed suppression capacity of tillage radish in an organic vegetable system,” Mark says. The trial involved seeding a tillage radish cover crop in late August following beet harvest. Mark planted peas and spinach the following spring and compared weed seed germination where he seeded the tillage radish to plots where he didn’t seed tillage radish.

“Weed suppression results were inconclusive – but as often happens, there were unexpected findings. The soil tilth and structure impressed me so much, I thought I had found the next great innovation in food production: letting tillage radish literally do the tillage for us.”

Across all of the trials Mark has conducted, he’s made sure that vegetable productivity has not been the sole focus. Just as important have been the costs of the practices and the effectiveness of the pest-control practices. Many of his trials evaluated different mulching practices like black plastic, paper, straw and residue from an oat cover crop. Mark considered the time spent applying these mulches, along with their effects on weeds and vegetable productivity, when deciding which he should adopt on a broader scale on the farm.

Bruce Carney farms with his family at Carney Family Farms on 300 acres south of Maxwell. The family primarily raises grass-fed and -finished cattle, hair sheep, pigs and poultry. They have also begun adding fruit, nut and shade trees and practicing silvopasture with their diversity of livestock. Since 2009, when Bruce joined the Cooperators’ Program, he has conducted 20 on-farm trials and hosted seven field days. His research over the years has spanned grazing cover crops, pasture management, monitoring carcass quality in grass-based systems and wildlife monitoring on the farm. 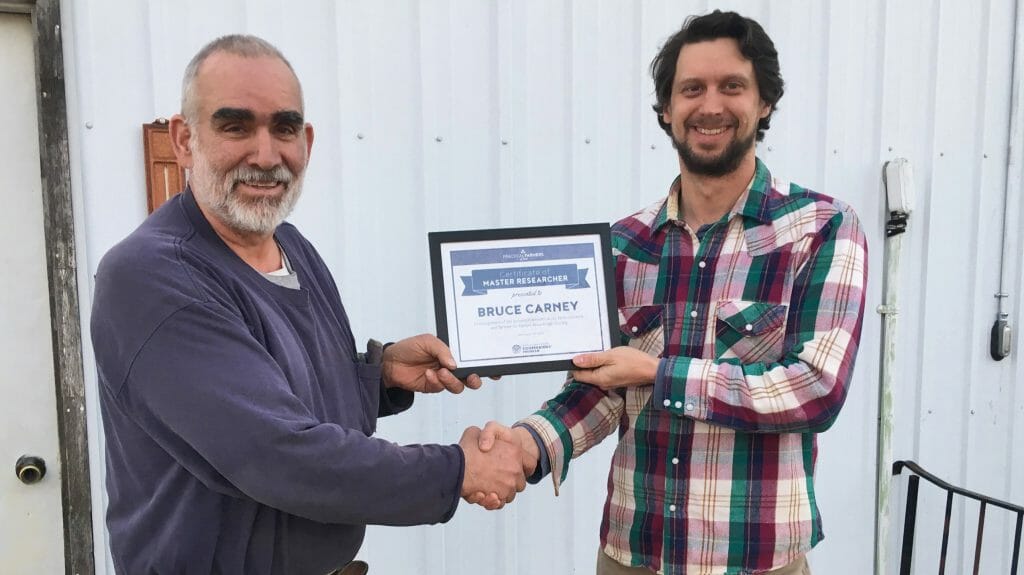 Bruce says he wanted to do on-farm research with PFI to learn more about cattle and pasture. “I want to leave a legacy rooted in perennial agriculture for my children and grandchildren,” Bruce says. “I found Practical Farmers of Iowa and learned they were a diverse group of people, farmer-led. It didn’t matter what you wanted to research. PFI would help set it up and connect you with other interested farmers.”

“I found Practical Farmers of Iowa and learned they were a diverse group of people, farmer-led. It didn’t matter what you wanted to research. PFI would help set it up and connect you with other interested farmers”  – Bruce Carney

Bruce appreciates that PFI research isn’t biased; this is what drew him to on-farm research in the first place. “The research is honest, done by a third party not influenced by companies with products to sell.”

Bruce is quick to point out that this could be a boon for row-crop farmers who have neighbors with livestock. A row-crop farmer would see benefits from cover crops, like weed suppression and less chemical use, and grazing days are a benefit to the grazier, Bruce says. “One thing that could help both in the long run is to have a long-term lease agreement.” This project added to a growing body of work by PFI cooperators on grazing cover crops: Results continue to show that grazing cover crops reduces feed costs and these savings help pay for establishing the cover crops.

The Cooperators’ Program began in 1987. The earliest trials involved farmers looking to save money through more judicious use of fertilizers and pesticides – some were able to eliminate these costly inputs altogether thanks to rigorous research methods. Since then, over 241 farmers have conducted 1,443 research trials on a wide variety of topics in field crops, horticulture, livestock and grazing, wildlife habitat and more. Results from these investigations have helped countless farmers make more informed decisions about their farm operations.

Sharing knowledge at field days is equally vital to PFI’s values and our mission of equipping farmers to build resilient farms and communities. Research reports summarizing project findings can be found at: practicalfarmers.org/research.