Plant breeding has been practiced since ancient times, when the first wild crops were domesticated for agriculture, but it’s come a long way since then. Today, plant breeders can select for a myriad of different traits, from grain qualities like low protein or high test weight to innate resistance against particular pests and diseases.

This is a boon for farmers because it gives them access to plant varieties that may perform well in their soils and climates. It also means they can produce a product keyed into the demands of their target market. Unfortunately, funding for breeding during the 20th century and into the 21st was slowly funneled into a narrower and narrower set of crops, leaving Iowa and other Midwestern states with few or no breeders of oats, rye, barley, triticale and wheat.

For farmers, this lack of research and development of small-grain varieties translates to real risks and costs to their bottom lines. Less disease-resistant small-grain varieties may require more fungicides. Lower-yielding varieties cut into revenue. And certain grain specifications, like test weight in oats, can slam the doors to the more lucrative markets for food-grade products.

To address this gap, Practical Farmers has been trialing oat varieties at three Iowa locations since 2015, adding a fourth spot in 2018. The aim is to arm farmers with better data so they can estimate how varieties will perform in their patch of Iowa soil. In 2018, we launched a project to organize small-grain breeders throughout the Midwest and build a new tool to predict the best-yielding varieties based on a farmer’s zip code. 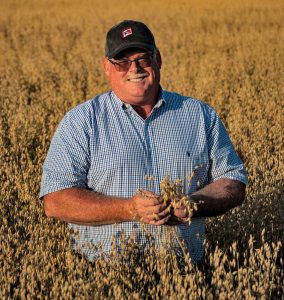 Since 2015, Practical Farmers has organized variety trials at several locations in Iowa. In 2019, our fifth year conducting this research, we also expanded our trialing to include rye for the first time.

From 2015-2019, all trials were conducted on Iowa State University research farms at Kanawha (northern Iowa) and Nashua (northeastern Iowa), as well as on one PFI farm location. Starting in 2018, we expanded the oat trialing to the ISU Ag Engineering and Agronomy Research Farm in Boone (central Iowa).

PFI member and current board president Wendy Johnson and her neighbor and fellow PFI member, Wayne Koehler, have traded the honor of hosting the trials through the years. “It was very interesting the two years I had the trial to see the variation in the variety,” Wayne says. “Some of [the plants] will be different heights. Some, when they start to head out, you can tell differences in the maturity speed. Closer to harvest, you can tell differences in which varieties will lodge and not stand as well.”

The results of these variety trials are published as research reports on PFI’s website each year and serve as a resource for farmers who want to select the right small-grain variety for their operation and goals.

“A major component of the [variety selection] decision for me is: What is the intended use of the oats? Why am I producing them?” Wayne says. Potential uses for oats include as livestock feed (hay or grain) or bedding (straw); as a nurse crop for alfalfa; for milling or food-grade markets; or for seed. “Over the years, I’ve grown oats for all of these different reasons,” Wayne says, “so the market identification is important.”

“A major component of the [variety selection] decision for me is: What is the intended use of the oats? Why am I producing them? ” – Wayne Koehler

If your end use for the grain is livestock feed, you probably want the biggest yield possible, whereas if you’ll take oatlage or oat hay, you might want to look at plant height as an indicator of potential tonnage. “If you’re in an area with a miller or processor for food-grade [oats], then test weight becomes a higher priority,” Wayne says. “Other times, I have seed contracts, where I grow [oats] for seed. Then it’s more of whoever you’re growing the seed for will determine the variety.”

This past year Wayne grew certified Natty for a cover crop seed business. When growing oats for seed, special care must be taken, as the vast majority of oat varieties have legal restrictions on the conditions under which they can be marketed as seed.

Variety trial results can also give farmers clues as to how to manage the crop in our Iowa soils and high-moisture climate. At the Nashua research location, an ongoing fungicide trial shows the response, and thus return on investment, of fungicide applications to key varieties.

The results show that producers who wish to avoid fungicide applications can do so without sacrificing yield by selecting more highly resistant varieties. Another perk: these varieties are easier to manage. “Pay attention to disease resistance and tolerance ratings,” Wayne says. “It helps give you an indication of how closely you might have to manage the crop as far as scouting for disease and the likelihood of whether you may or may not need to apply fungicides.”

It’s important, however, to recognize the limits of variety trial data. While they can empower you to make educated guesses about how the season will go, the locations where the research was conducted all have inherent differences – physically, in terms of soils; temporally, in terms of weather from year to year; and managerially, in terms of the tools and tenets a farmer uses to manage their system.

“[The trial] yields were lower than my own oats were this past year [in 2019],” Wayne says. “My own oats were able to get drilled earlier than the trial plot was – at least a week earlier. I no-tilled my oats, which gained me a day or two because I didn’t have to wait for it to be dry enough to do a tillage pass.” By contrast, the trial plots were planted with a standard drill, so a pass of soil finishing was conducted on the day of or prior to oat planting.

The phenomenon of spotting differences between the same varieties at different locations, and seeing the top-yielding varieties shuffle at each site, has a technical term: genotype by environment interaction. Lucia Gutierrez, associate professor in the Agronomy Department at University of Wisconsin-Madison, researches these interactions and breeds oats, wheat and barley.

“A genotype by environment interaction means that if we have two varieties and we grow them in two different environments, the best variety might be different in each environment,” Lucia explains. “Small grains, particularly, have a large genotype by environment interaction, so one variety is not going to work for the whole U.S.” Therefore, the best data on variety performance for crops like oats or wheat would be to have a full-blown variety trial in every single field across the region – which is obviously unrealistic. 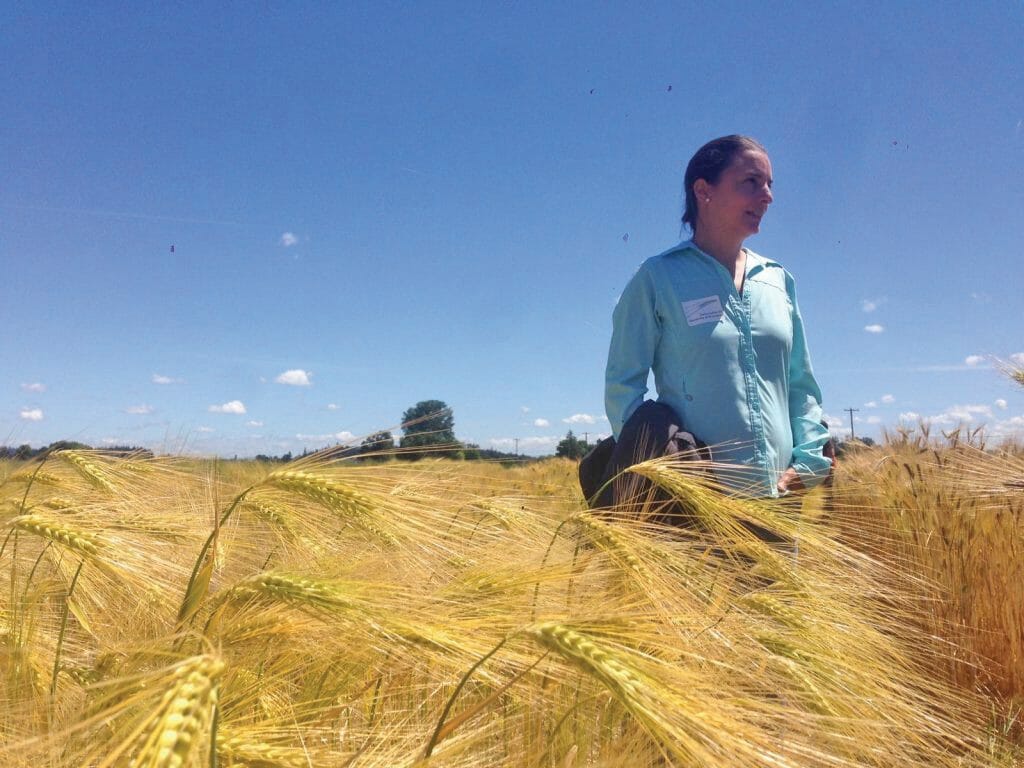 Lucia Gutierrez stands in one of her barley breeding test plots located in Wisconsin.

One area of Lucia’s research addresses this gap in field data by developing models that can predict very localized small-grain variety performance. In 2018, PFI organized a team of 14 researchers and successfully applied for a Sustainable, Agriculture Research and Development (SARE) grant to develop one such model that would help farmers better predict the top-performing variety for their location – even if there wasn’t a variety trial location nearby.

With this project, Lucia’s lab will use oat and wheat variety trial data provided by researchers in six states throughout the Midwest to build a statistical model that will classify a farmer’s location as a certain mega-environment. The model will take into account topography, soils, climate and other factors, and then access the data from the variety trials conducted in the most similar mega-environment to predict oat and wheat variety performance in that farmer’s location.

“With only three or four variety trial locations in Iowa, we don’t know if a farmer’s location will perform like the one they’re closest to or the one farther away that has more similar soil or terrain, for example,” Lucia says. “The genotype by environment model we are building seeks to understand why the varieties change in the ranking and then use this information to predict the top varieties for farmers.”

Eventually, the model will be publicly accessible on the Practical Farmers’ website, where any farmer in the coverage area will be able to enter their zip code, their crop (oats or wheat) and their end market to generate the model results for themselves. But first, the model’s predictions will need to be tested on farms.

“The next step will be to trial the model-predicted varieties on farms so we can assess variety performance between research stations and trials. That way we’re not just working with a theoretical ‘how will it work?’ but we’ll have actual data to continue to improve the model in the future,” Lucia says. “Farmer participation will be very important.”

If you’re interested in getting involved as a trial location for the selector tool for oats or winter wheat, contact Becca Clay at (515) 232-5661 or rebecca@practicalfarmers.org.