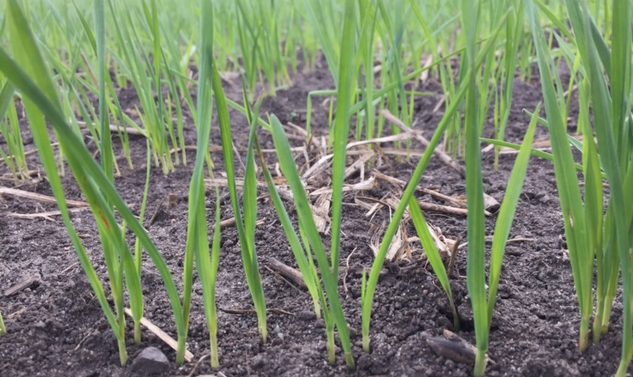 Oats emerge from the soil at the ISU Northeast Research Farm in Nashua on April 28.

“It was very interesting the two years that I had the trial to see the variation in the variety,” Wayne says. “Some of them will be different heights, some of them when they start to head out you can tell differences in the maturity speed. Closer to harvest you can tell differences in which varieties will lodge and not stand as well.” If you’d like to follow along, you can access the 2019 Oat Variety Trial here.

Yields on average were higher in 2019 than in the previous years, with Saddle and Reins standing out as top yield performers in all four locations. Test weights were also very good this year, with many varieties meeting the 36 pound test weight minimum requirement for milling markets. Antigo took the prize for highest test weight across the four locations, ranging from 38-40 pounds per bushel. 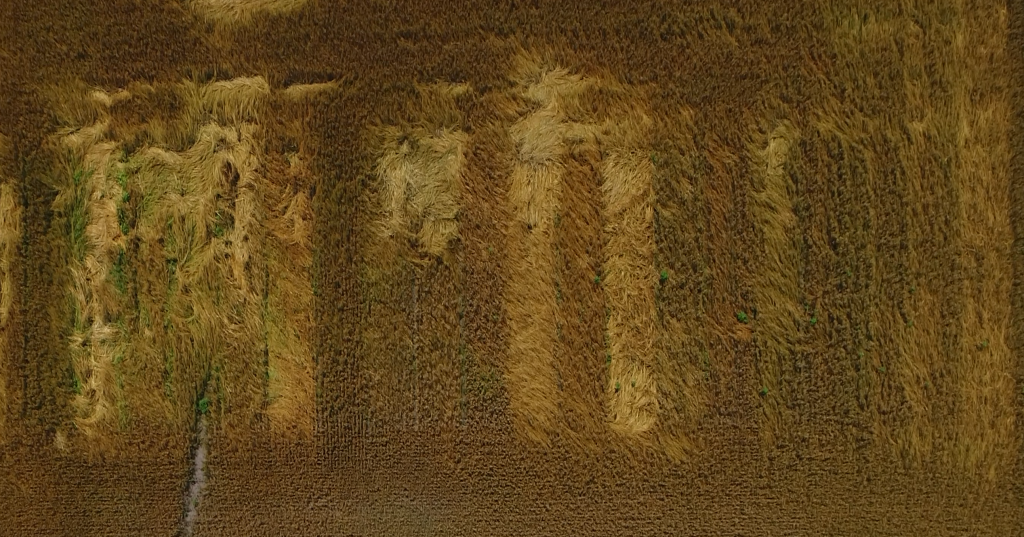 Disease pressure in oats was light in 2019 despite higher than average rainfall. A fungicide trial tested yield responses on four varieties (Deon, Hayden, Horsepower and Shelby 427) and showed that Hayden and Horsepower statistically increased yield and test weight with a fungicide application, while Deon and Shelby 427 did not. This is likely due to the innate disease resistance from the genetics of Deon and Shelby 427 which are resistant or moderately resistant to more diseases. Producers who wish to avoid fungicide applications can do so without sacrificing yield by selecting more resistant varieties. 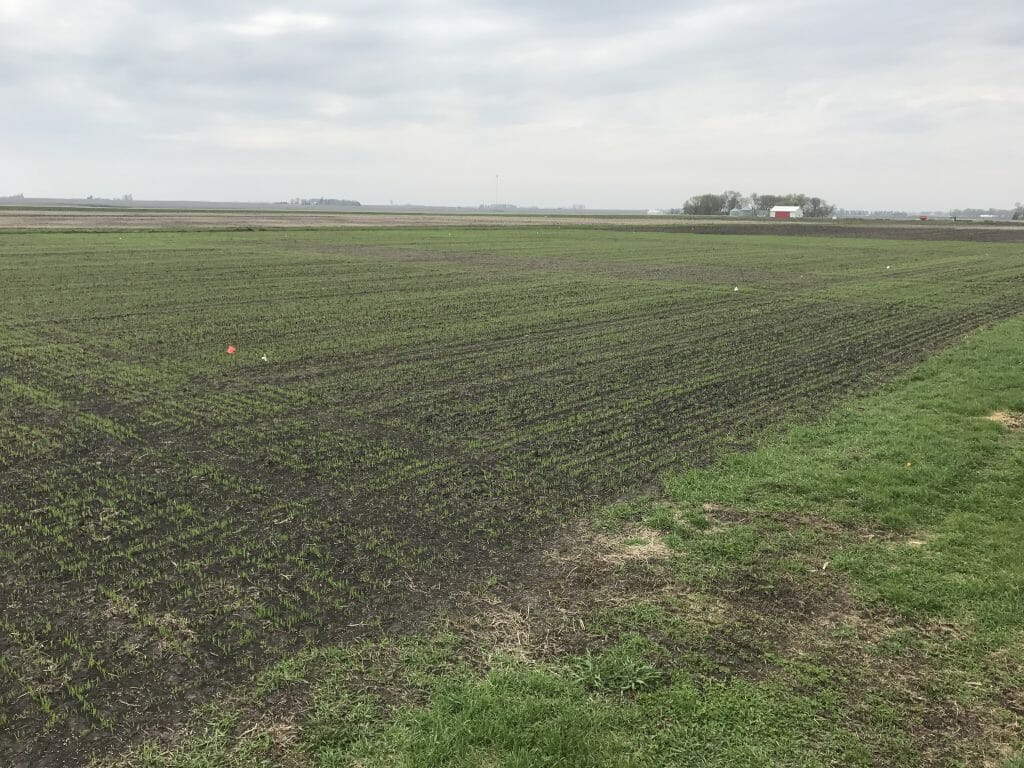 Each plot is flagged to indicate the location of the varieties. 16 varieties were tested in the trial in 2019.

Another perk to disease resistance is easier management, “Pay attention to disease resistance, tolerance ratings,” Wayne says. “It helps give you an indication of how closely you might have to manage the crop as far as scouting for disease and the likelihood of whether you may or may not need to apply fungicides.”

Besides yield, test weight and disease resistance, the other factors a grower might want to consider is standability of the oat or likelihood that the crop will not fall down or lodge before the maturity of the oat.  Counterintuitively, early maturing oats are more desirable in hotter climates so that they can fill their head before the summer heat really gets under way – which leads to high test weight in oats. “I tend to like a little earlier maturing varieties. They get through that filling period before the real hot weather comes,” Wayne says. “I’ve had better luck with earlier varieties that way than later varieties.” 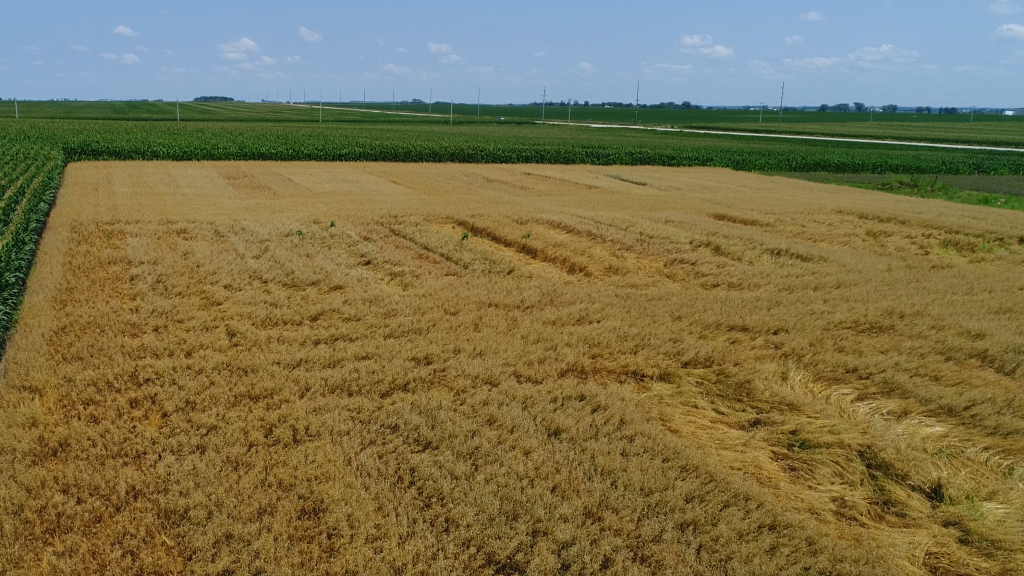 Some of the varieties were beginning to lodge later in the growing season. This was taken at Wayne’s farm on July 23. Wayne harvested these oats on August 2.

“[The trial] yields were lower than my own oats were this past year,” Wayne observed. “My own oats were able to get drilled earlier than the trial plot was – at least a week earlier. I no-tilled my oats, which gained me a day or two because I didn’t have to wait for it to be dry enough to do a tillage pass.” The trial plots at Wayne’s farm were planted on April 16 with a standard drill, so a pass of soil finishing was conducted on the day of or prior to oat planting.

“A major component of the [variety selection] decision for me is what is the intended use of the oats. Why am I producing them?” Wayne says. Potential uses for oats include livestock feed as either hay or grain, straw for bedding, as a nurse crop for alfalfa, for milling or food grade markets or for seed. “Over the years I’ve grown oats for all of these different reasons, so the market identification is important.”

If your end use for the grain is livestock feed you’re probably going for the biggest yield possible, whereas if you’ll take oatlage or oat hay then you might want to look at plant height as an indicator of potential tonnage. As a nurse crop for alfalfa, plant height is also an important factor, but you’ll want a shorter plant allowing more light to reach the understory of alfalfa.

“If you’re in an area with a miller or processor for food grade [oats], then test weight becomes a higher priority,” Wayne says. “Other times I have seed contracts, where I grow [oats] for seed. Then it’s more of whoever you’re growing the seed for will determine the variety.” This past year Wayne grew certified Natty for a cover crop seed business. When growing oats for seed, special care must be taken to select varieties that are legal to be propagated and sold as seed as the vast majority of oat varieties have legal restrictions on their sale as seed.

Practical Farmers’ first ever Rye Variety Trial report is also available on the PFI website. Rye trials were conducted at three sites: Wendy Johnson’s farm near Charles City, ISU Northern Research Farm in Kanawha and ISU Northeast Research Farmin Nashua. The results showed hybrid varieties Bono and Brasetto as the top yielding at all three trial sites. Hazlet and ND Dylan were the top yielding varieties among the open-pollinated (non-hybrid) varieties and they were the most recently released of the four open-pollinated varieties tested. 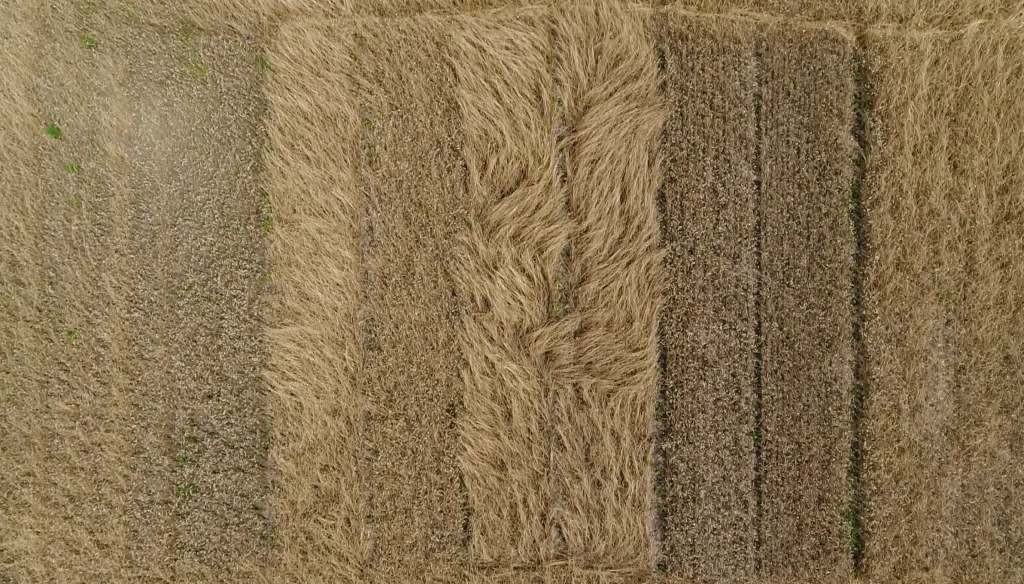 Practical Farmers hosts learning calls about a variety of topics related to small grains and diversified crop rotations on the first Friday of the month. To get the announcements of each call time and topic sign up for our small grains monthly newsletter. We are also looking for more on-farm trial sites for several oat and rye variety trialing projects, contact rebecca@practicalfarmers.org if you’re interested in getting involved in this research.

Select the Right Corn and Soybean for Your Extended Rotation and Save!