Elements of Alfalfa Establishment: Methods for Success With Small Grains in the Mix

Harvesting diverse forages can bring added value to any farmer with livestock. While alfalfa is a tried-and-tested forage for many, bringing small grains into the mix can enhance alfalfa establishment and provide more crop diversity. In June, at the first small grains shared learning call of the summer, farmer Jason Russell of Monticello, Iowa shared his management experiences for seeding small grains with alfalfa. Jason and his family currently raises cattle, sheep, pigs, corn and diverse forage mixes. 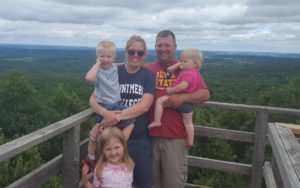 Alfalfa, a perennial forage, has the potential to keep roots in the ground for years at a time, fix nitrogen, and provide quality forage to livestock. While the potential is there, alfalfa is a rather fickle crop to get established and it can be costly if managed incorrectly.

The key to success with alfalfa begins with soil tests. “You want to make sure if you’re going to devote your time, land, costs, and resources to growing alfalfa that you have your pH right” says Jason. A pH of 7.0 is ideal for establishing alfalfa – higher than the ideal pH for corn. If the field’s pH is too low (acidic) a soil amendment like lime can fairly affordably raise the pH.

When alfalfa grows it produces a chemical to prevent some small seeds, including alfalfa from germinating – this occurrence is known as allelopathy. Because of this, over-seeding or re-seeding a poor stand of alfalfa (beyond mending skips early on) isn’t possible. Beyond the earliest stages of establishment, clover and small grains are better options to patch poor stands as they are resistant to the allelopathic effect. If complete re-establishment is necessary, then the field must take a year off from alfalfa.

Small Grains in the Mix

Alfalfa is often seeded in the spring alongside oats, a common, inexpensive nurse crop. If going with oats alongside alfalfa, recommended oat seeding is 2-3 bu/ac.  The oats could then be harvested for grain, straw, or baled and used for hay. Though oats are an excellent spring nurse crop to establish, they aren’t the only option.

Jason suggests trying winter grains like cereal rye, triticale or wheat as an alternative. “You can use any of those like you would use oats – you can plant those in the spring even though they are supposed to be planted in the fall,” says Jason.

When seeding winter grains in the spring Jason suggests a grain seeding rate of 0.5 bu/ac to a maximum of 1 bu/ac. Spring-seeded winter grains do not produce seed; spring planting bypasses their required vernalization. Without going to seed, Jason says, “You basically end up with really high quality first-cutting hay because you have alfalfa and a tender grass in there. The cutting retains a lot of moisture, so plan to use a spring-seeded alfalfa and winter grain mix as silage.”

“Instead of using a cover crop in the fall after, for example, corn silage harvest, you can actually use this window as an opportunity to establish your new alfalfa field,” notes Jason. To make this work in central Iowa, the optimal seeding window is during September, up to the first week of October. Good fall growth is necessary to avoid stand issues in the spring.

For fall-seeding, 1 bu/ac is appropriate for cereal rye or other winter grains. In the fall, this rate will allow the alfalfa to grow with the small grain to avoid smothering. Jason stresses, “This is an advanced establishment technique for alfalfa – you need to have a lot of experience with your equipment to know you’re planting your winter grain and your alfalfa at the right depth – alfalfa does not need to be planted very deep, I say zero to half an inch deep is more than enough.”

Established alfalfa stands can be augmented in the fall after the last cutting by seeding winter grains with a no-till drill. This technique increases the first silage cutting tonnage the following year. The seeding depth is a critical factor to get right when augmenting winter grains and alfalfa in the fall.

When seeding with rye, it should be drilled at a depth of 1 inch to improve chances of germination. “You can no-till 1 to 2 bushels of winter grains to augment the first cutting of alfalfa for the following spring. This does not destroy the alfalfa stand, it makes it ton out very well,” says Jason.

Perennial grasses such as timothy or orchard grass can be used in a similar way to small grains for fall or spring establishment. The alfalfa seeding rate will need adjustment if one or more perennial grasses are in the mix during the fall. “If you’ve got two or three kinds of grass with alfalfa, you are going to want to back off on the alfalfa to 10-15 lb/ac,” says Jason, “It kind of depends how much grass you really want in your final hay stand, you’ve got to experiment with it.”

Why seed perennial grasses with alfalfa? Jason says, “It’s a hedge against a poor hay crop. For example, if you have insects eating your alfalfa or a winterkill event, or a combination of the two. And I think it is exceptional nutrition and more forage nutrition than just alfalfa.”

Equipment needs for seeding small grains and alfalfa vary with different management styles. With no-till systems, having a no-till drill with coulters to disturb the soil allows space for the alfalfa to establish. On tilled ground, a single disc drill could be used to spread the seed on top of the ground. For both systems, Jason stresses the need to use a cultipacker for optimal seed to soil contact. Regardless of impending rain, Jason advises, “cultipack it anyway – this will cause enough disturbance to work that seed into the ground a quarter of an inch and get seed-to-soil contact.”

Alfalfa as a Staple in Rotation and Pasture