This project was funded by USDA-NCRS and the Walton Family Foundation.

Widening the corn row is a version of the solar corridor crop system concept which “is designed for improved crop productivity based on highly efficient use of solar radiation by integrating row crops with drilled or solid seeded crops in broad strips (corridors) that also facilitate establishment of cover crops for year-round soil cover.”[1] Previous PFI on-farm research from 2018 and 2019, saw four farms report no difference in corn yields between the 30- and 60-in. row-widths, while six other farms reported yields reduced by 6 to 30% in the 60-in. row-widths compared to the 30-in. row-width.[2,3] These mixed results aligned with previous research from the University of Missouri that found equivalent corn yields between 30- and 60-in. row-widths in one year and yields reduced by 14 to 39% in the 60-in. row-widths in two other years. [4] The reports of 2,500 to 4,000 lb/ac of cover crop biomass by the time of corn harvest with 60-in.-wide corn rows from the previous two years of on-farm research is particularly appealing to those wishing to graze livestock in the fall. “I’m looking to extend the grazing window and to have an actively growing plant 365 days a year,” Mark Yoder said, who also conducted a trial in 2019. Fred Abels, Nathan Anderson, Jeff Olson and Tim Sieren all echoed Yoder’s motivation for conducting on-farm experiments in 2020. 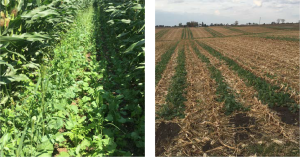 At left, cover crops growing between 60-in.-wide cornrows at Tim Sieren’s on July 17, 2020. At right, after corn was harvested, cover crops are evident in the strips where corn was planted in 60-in. row-widths at Sieren’s. Photo taken Oct. 22, 2020.

Each cooperator planted randomized and replicated strips of corn in 30- and 60-in. row-widths and then interseeded cover crops to all strips in early summer (Figure A1), except Sieren who implemented a slightly different design that involved two corn rows on 30-in. centers in the middle of the 60-in. row-width treatment strips. Strips at each farm were as wide as at least one combine pass and ran the length of the field. Corn management at all farms is provided in Table 1. 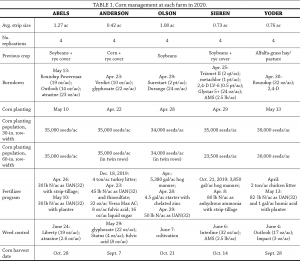 Abels, Olson and Sieren assessed aboveground cover crop biomass near corn harvest by clipping shoot and leaf material from 1-ft × 1-ft quadrats placed in the strips. Samples were stored in paper bags and air-dried for at least one month before determining dry biomass. Anderson and Yoder intended to sample biomass, but they observed negligible growth due to drought conditions on their farms (Figure A2).

All cooperators harvested corn individually from each strip and grain yields were corrected to 15.5% moisture. 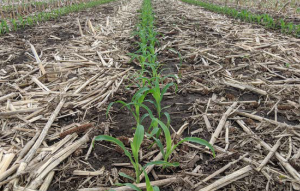 To evaluate any effect of corn row-width on corn yield, we calculated the least significant difference (LSD) at the 95% confidence level using a t-test. If the difference in average yield between the two row-width treatments was greater than the LSD, we would expect such a difference to occur 95 times out of 100 under the same conditions – we refer to this as a statistically significant effect. On the other hand, if the difference resulting from the two treatments was less than the LSD, we considered the results statistically similar. We could make these statistical calculations because the cooperators’ experimental designs involved replication of the two corn row-widths (Figure A1). 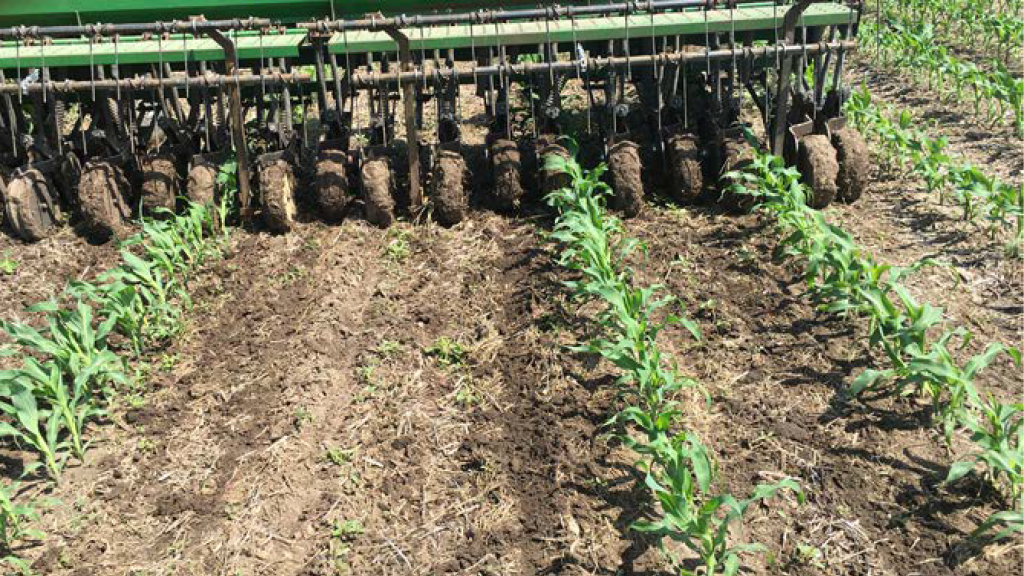 Tim Sieren interseeded cover crops to corn with a drill on June 6, 2020.

Cover crop biomass was statistically greater in the 60-in. rows at Olson’s farm (Table 3). Sieren’s samples were bulk harvested, so we could not analyze statistically; but numerically it looks like much more biomass in the 60-in. row-widths. Abels reported severe weed pressure in both treatments. At Anderson’s and Yoder’s farms, cover crop growth was negligible due to very dry conditions. 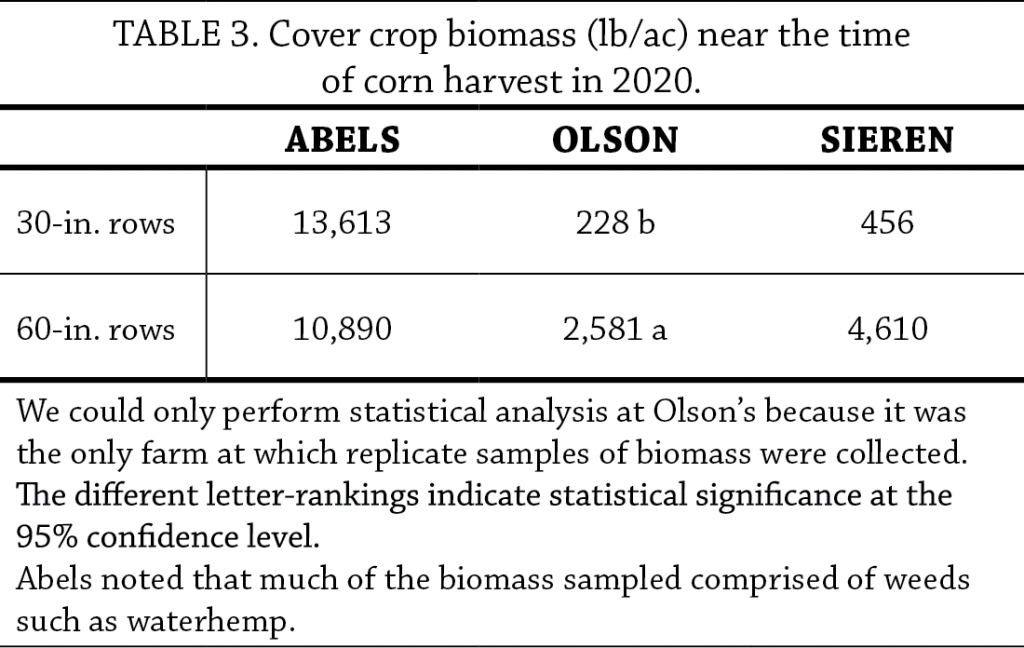 At four of the five farms, the 60-in. rows resulted in statistically lower corn yields (Figure 1). Only at Yoder’s was there no statistical difference in corn yields between the two row-widths. 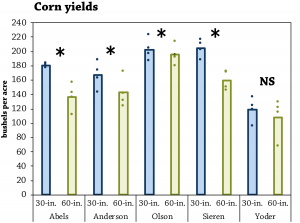 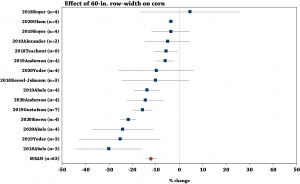 After three years of on-farm research, planting corn in 60-in. row-widths has resulted in statistically lower grain yields than corn planted in 30-in. row-widths in 10 of 15 trials. The cooperators also reported weed management as a substantial challenge in this production system. “Early season weed control is crucial,” Yoder said. Herbicides need to be chosen wisely so that their residual activity does not injure the cover crops. Moreover, neither herbicides nor interrow cultivation can be employed after the cover crops are interseeded to the corn. “I learned the value of a good crop canopy for controlling weeds,” Sieren added.

Many cooperators cited the potential for fall cover crop forage as motivation for trialing 60-in. row-widths. Dry conditions, especially at Anderson’s and Yoder’s, put a damper on expectations in 2020. Though some have observed cover crops interseeded to corn in 60-in. row-widths produced far more biomass over the 2018 to 2020 project period, most share Sieren’s synopsis at this point: “The yield penalty was too high, for no more extra grazing that was produced.”

FIGURE A1. Sample experimental design used by the cooperators. The design includes at least four replications of the two corn row-width treatments (8 strips total). This design allowed for statistical analysis of the results.

FIGURE A2. Mean monthly temperature and rainfall for 2020 and the long-term averages at the nearest weather stations to each farm.[5] A) Grundy Center (Abels); B) Cherokee (Anderson); C) Wapello (Olson); D) Washington (Sieren); E) Lamoni (Yoder).