“Should I plant corn into a green, living cereal rye cover crop? Or should I wait until the cereal rye cover crop is brown and dead before planting corn?” Just as the robins and crocuses reappear each spring, so too do these questions among corn farmers who use cover crops. Research by PFI farmers and university scientists over the past decade provides some insights. 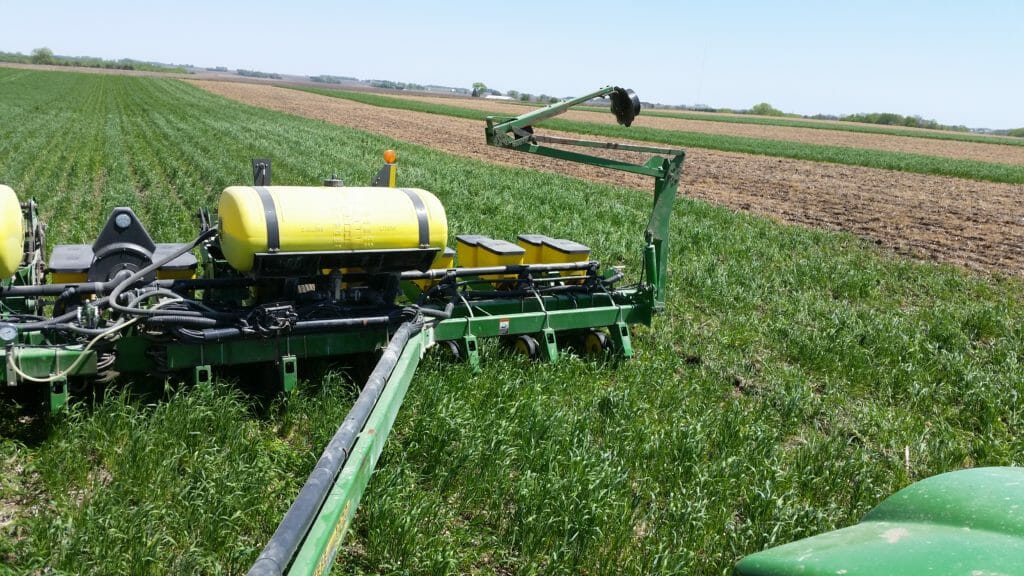 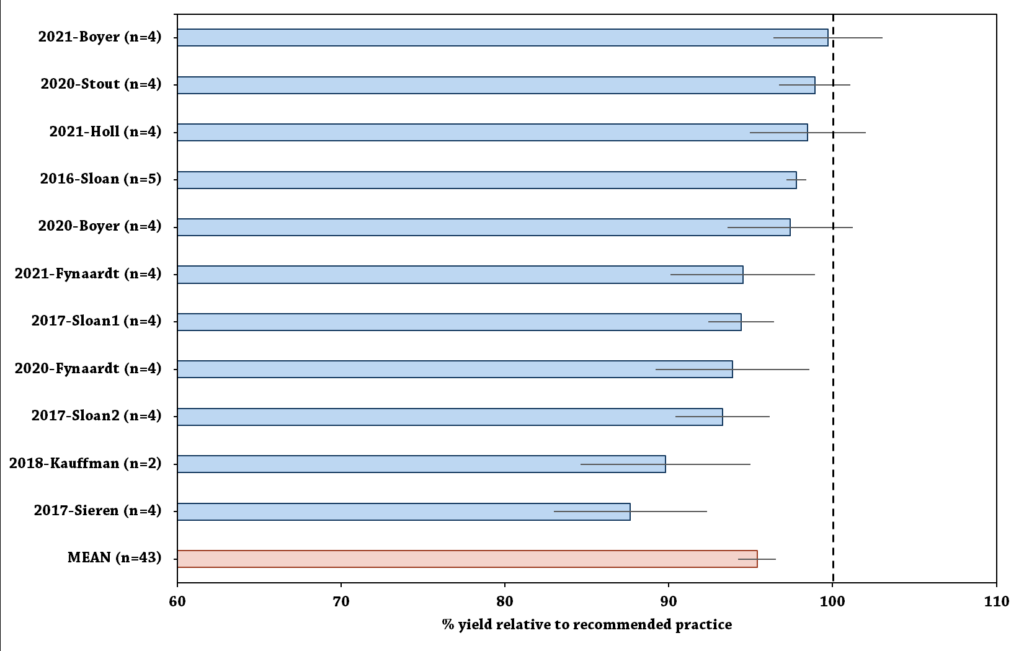 It should be noted that each of these farms applied 30–70 units of nitrogen fertilizer at the same time as planting corn. This strategy, applying nitrogen with the corn planter, is commonly cited by experienced farmers as being vital to overcoming yield drag from planting green. The eleven on-farm trials, however, don’t exactly bear that out. So, why did most of the trials suffer yield drag from planting green but not all of them?

Cereal rye cover crops are known for their tremendous ability to scavenge from the soil two of the most important resources for plants: moisture and nutrients (namely, nitrogen). This is good! An overabundance of moisture in the soil in the fall and spring can carry nutrients and soil particles into waterways – we use cover crops precisely to prevent this from happening. A cover crop’s scavenging ability is directly related to the amount of growth by the cover crop – the more the cover crop grows, the more moisture and nutrients it takes up from the soil. Left unchecked, though, the cover crop can cause a deficit in these resources for the succeeding corn crop.

What’s striking about most of the trials from 2016–2021 that suffered yield drag is the amount of cereal rye cover crop growth that amassed in the spring prior to the farmers planting corn: 2,000–5,000 lb/ac of biomass (for a visual, that’s roughly 10–25 inches of aboveground plant growth). I say most trials because we did not measure cover crop biomass in all eleven trials. But because plant growth is regulated by temperature over time, we can get a sense of cover crop growth at a particular site by investigating the temperatures to which the cereal rye cover crop plants were subjected during the spring.

Figure 2 below depicts the heat units accumulated in the spring up until the time of corn planting in each trial and the effect on corn yield from planting green relative to corn yield from the recommended practice of planting corn one to two weeks after terminating the rye cover crop. The farms that planted into a green, living cereal rye cover crop before 750 heat units accumulated in the spring tended to not suffer yield drag. 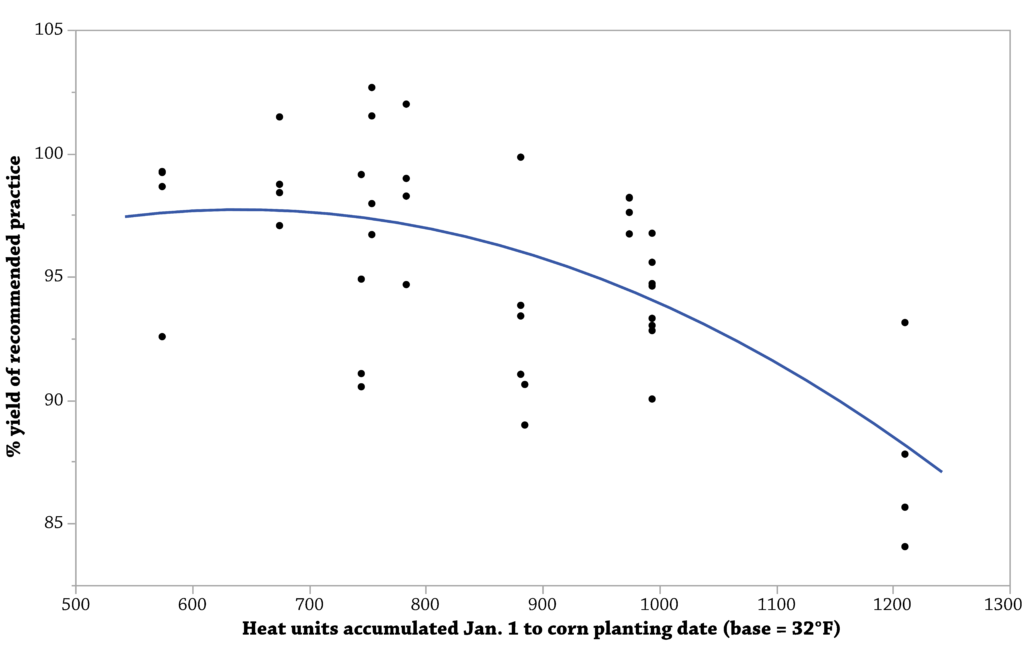 Anecdotally, farmers have observed cereal rye cover crop growth to really take off as temperatures consistently rise. With that in mind, the data from the on-farm trials suggest that those who plant green after 750 heat units accumulate in the spring are likely planting into much more cover crop growth than those who plant green before then. In other words, yield drag from planting green might be potentially avoided if planting corn before temperatures rise and cover crop growth accelerates in spring. Basically, the warmer it gets in the spring, the more likely you’ll suffer yield drag from planting green because of competition from the cover crop.

On-farm research conducted by Wade Dooley and Dick Sloan in 2018 sheds more light on this subject. Both farmers chose a single termination date for their cereal rye cover crop and then compared two corn planting dates: near rye termination (plant green) and delaying until two weeks after rye termination. Table 1 shows the amount of cover crop biomass and spring heat units that accumulated at both farms before the cover crop was terminated.

Taking the results of these on-farm studies together, it might be prudent to first calculate accumulated spring heat units (with a base temperature of 32 degrees Fahrenheit) when deciding whether or not to plant green. If less than 750 heat units, it may be an opportunity to avoid the ill effects of planting green. Otherwise, it might be best to terminate the cover crop and then wait one to two weeks later to plant corn in order to avoid potential yield drag.

Other Ways to Avoid Yield Drag From Planting Green

At this point you might be wondering, “Don’t we want to let the cover crop grow in the spring to do its thing? What’s the point of spending the money to put it in the field only to terminate it before it grows too much?” After all, the more we allow cover crops to grow, the more we stand to gain from them. Cover crop roots feed soil microbes which build soil structure and cycle nutrients – key functions of healthy, productive soils on which our cash crops rely.

Both farmers and researchers have explored means for raising a successful of corn crop while also maximizing the benefits of a cereal rye cover crop. One such way has to do with reducing the influence of the cover crop on the corn by increasing the physical distance between the cover crop and the corn. This can be done by precisely seeding the cover crop such that bare skip zones are left where the eventual corn row will be.

In 2019 and 2020, Jon Bakehouse, who farms with his family in southwest Iowa, conducted on-farm trials that explored cover crops planted in wide rows (15- and 30-inch rows). The project was a collaboration with the Iowa Soybean Association and Dr. Alison Robertson’s lab in the Department of Plant Pathology and Microbiology at Iowa State University. Sarah Kurtz, a Master’s student in Alison’s lab, also conducted trials in 2019 and 2020 at an ISU research station in central Iowa.

In the trials at both Jon’s farm and the research station, the cereal rye cover crops were terminated about one week prior to planting corn in late April or early May and nitrogen fertilizer was applied at the same time as planting corn. In both years, Jon found corn to do just as well when planted after the wide-row cover crops as it did where there was no cover crop. Sarah’s experiments showed similar results. Compared with where the cereal rye cover crop was solid-seeded (drilled or broadcast), corn yields were improved by 10–72% where the cover crop was seeded in 15-inch rows. Sarah also observed less corn seedling disease in the plots where the cover crop was seeded in 15-inch rows.

This was an important finding because previous work from 2014–2020 published by Jyotsna Acharya (also from Alison’s lab) warns of the potential for cereal rye cover crops to harbor pathogens that hamper corn seedlings which translates to reduced corn yields, particularly when planting green. Taken together, Sarah writes in an article published in 2021, “…physically distancing the corn crop from the winter rye cover is one way to reduce the negative effects of a winter rye cover crop on corn…. This research demonstrated that spatially separating a winter rye cover crop from corn reduced seedling disease and benefited corn growth, development, and yield.” 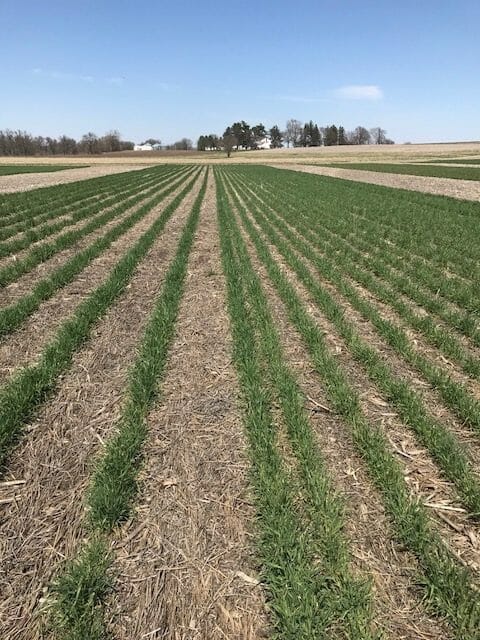 Already drilled or broadcast a cereal rye cover crop last fall? Some farmers have successfully removed the influence of the cover crop with strip-tillage, such as in the trial Tim Sieren conducted in 2018 on his family’s farm in southeast Iowa. Compared with no-till planting corn after the cereal rye cover crop, strip-till improved Tim’s corn yield by 15 bushels per acre and financial returns by $31/ per acre.

Main Takeaways From the Research 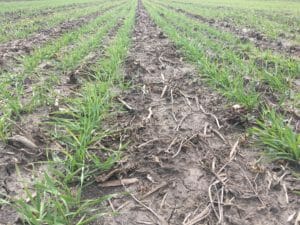 Cereal rye cover crop that was drilled with every fourth opener blocked in a plot from Sarah Kurtz’s experiment in central Iowa. This resulted in a 15-inch gap between each group of three rows of cereal rye where the future corn row would be planted. Photo taken Oct. 31, 2018.

These data are not the end all, be all. The common PFI disclaimer states: Your results and experiences may very well differ! Emphasizing this point while presenting a session on this topic at the 2022 PFI annual conference, Andy Linder, who farms in southern Minnesota, says “Try it for yourself! That’s what we need to do; we need to try.”