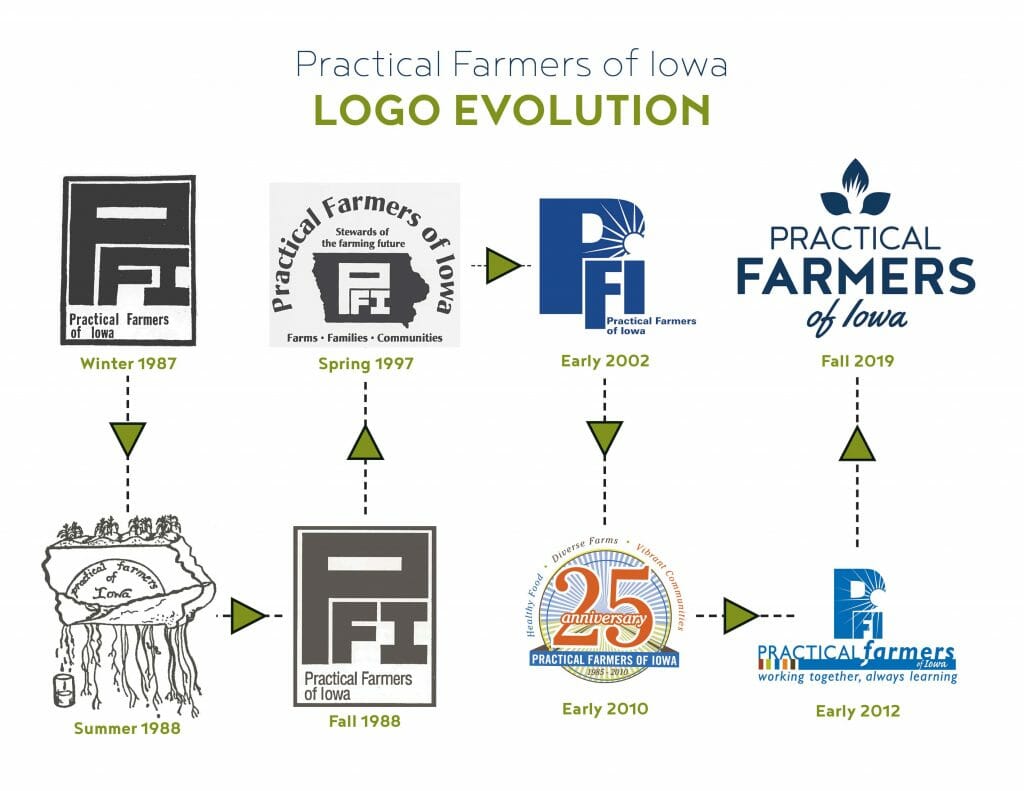 Since our founding in 1985, Practical Farmers of Iowa’s logo has morphed and evolved in tandem with the organization’s growth. For many members, both long-time and newer, the “PFI” acronym has been a core element – a visual badge as well as a friendly nickname – and this reality is reflected in a succession of logos.

Practical Farmers’ first logo made its debut in the winter 1987 issue of “the Practical Farmer” newsletter. The logo was a hand-drawn boxy “PFI” inside a rectangle, with a woodcut feel and the conjoined letters “F” and “I” nested under a broad “P.” The name “Practical Farmers of Iowa” was typed under the acronym. 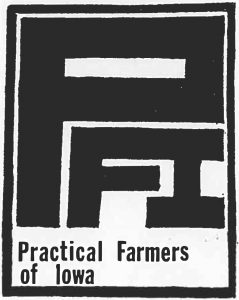 Soon after this first logo appeared, a much more elaborate logo popped into the PFI record. This singular hand-drawn image, first published in the summer 1988 issue of “the Practical Farmer,” depicted a farmscape on and inside a three-dimensional outline of the state of Iowa, with a sunrise and PFI’s name arcing over a stream, ridge-tilled corn sprouting from the top and corn roots dangling from the bottom.

Droplets of liquid seep from some of the roots, and a glass filled with water conveys the idea that anything we apply to the soil can eventually leach out and end up in our drinking water. The logo reflected real-life concerns and research interests of early PFI members: finding ways to save money, protect human health and improve soil and water quality. 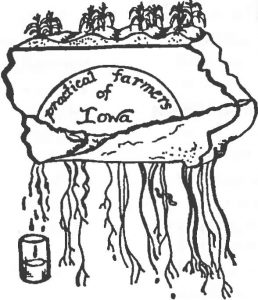 Rick Exner, a graduate student at Iowa State University at this time who facilitated PFI on-farm research projects for many years, recalls the logo as being the brainchild of a female ISU graduate student. “I and another grad student somehow got in touch with a student artist who had drawn us both,” Rick says. “Unfortunately, I have long since lost the artist’s name.”

This “roots” logo appeared sporadically in early PFI material – sometimes alongside a slightly updated version of the first PFI logo. But for several years, even after it disappeared from other outreach, it continued to be used with some regularity in Practical Farmers’ annual research report publication.

Starting in fall 1988, the updated acronym logo – with the letters “F” and “I” now separated, and an updated font – became the primary logo Practical Farmers of Iowa would use for the next 10 years. “We were using [this logo] as a template for the first PFI field signs,” Rick says. “I might have used my major professor’s computer to do it. I remember getting feedback to separate the ‘F’ and the ‘I’ so they weren’t joined.” 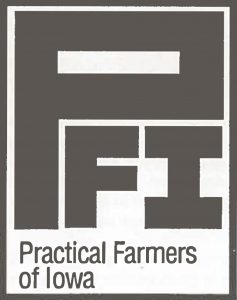 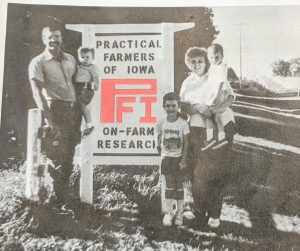 By the mid-1990s, Practical Farmers’ work and membership had expanded, and our branding had matured as well. In 1996, as PFI prepared for the end of an important grant that had been funding on-farm research and community groups, PFI embarked on a formal process to plan for the future. The board of directors hired a consultant to help craft a strategic plan and pinpoint areas for growth.

The effort also involved the creation of PFI’s first formal mission statement, as well as a new logo – replete with the tagline “Stewards of the farming future” (later changed to “Farmers helping farmers make better decisions”) and key message points – that the PFI leadership felt “better captured the essence of PFI,” as explained in the spring 1997 newsletter where the new logo was first unveiled.

While the familiar “PFI” emblem remained at its core – and the state outline and PFI name arcing overhead hearkened back to motifs of logos past – the new logo’s visual composition marked a key shift in focus and messaging from the simple boxy image that had come to define the organization over its first decade.

Five years later, in 2002, we rebranded again, unveiling a new logo at that year’s annual conference. The logo returned to the familiar acronym-centered design of PFI’s earlier long-standing logo, with some updates such as a less boxy shape, contours to the letters and a sunburst inside the “P.” Writing in Practical Farmers’ inaugural annual report published that year, PFI’s then-executive director, Robert Karp, explained:

“Our goal was to redesign the logo in such a way that it would maintain a connection with our history as well as capture in a fresh way the hope, creativity and enthusiasm that characterize the PFI membership. We hope this logo inspires Iowa’s sustainable food and farming community to not hide their light under a bushel but rather shout their good news from the mountaintops!” 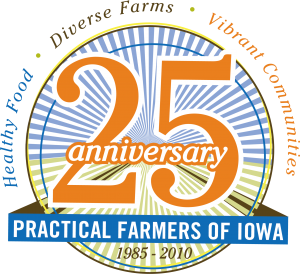 This logo prevailed for the next 10 years – with the exception of 2010, when we created a special logo and letterhead to celebrate Practical Farmers’ 25th anniversary. In 2011, we commenced another visual rebranding process.

By this time, Practical Farmers of Iowa’s membership was both larger and significantly more diverse, with ascendant areas like horticulture, grazing, on-farm energy, next generation, cover crops and others representing greater percentages of PFI’s member-led enterprises and interests.

Led by former PFI communications coordinator and graphic designer Ann Seuferer, the fruits of the visual rebrand debuted in early 2012 and included a suite of new logos, a color palette, PFI-specific fonts and a set of graphic design elements that would help create a more unified look to Practical Farmers outreach. The logos maintained the long-standing “PFI” acronym that was so connected to PFI’s history, as well as the sunburst motif, but added the new PFI colors, fonts and rectangular bars to the design.

In 2019, we embarked on our most recent visual rebrand. After nearly eight years with the previous logos – and in the wake of monumental organizational growth, including significant increases in membership, budget, staff, impact and public visibility – we felt it was time to re-imagine Practical Farmers’ visual identity to reflect these changes and carry us into this new era of PFI’s history.

The new logos maintain the simplicity that has been the hallmark of earlier PFI logos, but have been modernized to better match the changing design aesthetics of our time. The logos also strive to graphically convey Practical Farmers’ agricultural connection – a fundamental aspect of our identity that was missing from our past logos, save the early illustrated “roots” logo from 1988.

The leaf motif with the grass inside the negative space captures this ecologically conscious agrarian spirit. It can represent growing plants, grazing livestock, integrated farming systems – but it also signifies growth more metaphorically: of PFI as an organization and awareness linked to our impact.

“The leaf shape can be interpreted differently by different people,” says PFI graphic designer Sarah Krumm, who led the visual rebranding process. “It connects to field crops, horticulture and livestock, and speaks to our conservation roots.”

While we decided it was time to move forward from the “PFI” acronym that was so connected to our past visual identity, the new logos preserve the shapes and variants introduced in 2012 – and the contemporary yet friendly fonts evoke the core Practical Farmers of Iowa value of welcoming everyone, so that together we can equip farmers to build resilient farms and communities.