Margaret Chamas - Practical Farmers of Iowa Skip to content
About 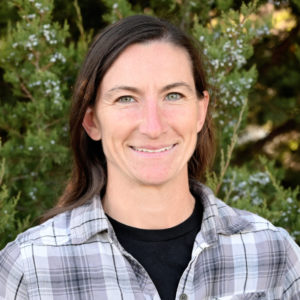 Margaret Chamas (re)joined the PFI staff in the fall of 2022. As the livestock viability manager, she oversees cost-share and business development projects that empower farmers to raise and market livestock in environmentally and economically sustainable and viable ways.

Previously Margaret Dunn, she served as PFI’s livestock coordinator from 2012-2014 following her graduation from Iowa State University with a master’s degree in animal science.  She grew up in New York raising hobby dairy goats, which she continues (at a much larger scale, and alongside meat goats, hair sheep, beef and dairy cattle, poultry, some equines and now even some pigs) to this day, at her farm near Kansas City, Missouri.

Margaret has held a variety of roles, including most recently managing her pasture-based livestock farm and offering targeted grazing services as a Goats On The Go affiliate. In other positions, she served as an agriculture and natural resources county extension agent in northeast Kansas; managed the livestock portion of an agri-education and agritourism operation; and has done small-scale education, outreach and contract work on her own.

Her greatest interests are in animal (particularly ruminant) nutrition and management, and she enjoys weaving that interest into efforts to make farms more sustainable and profitable.