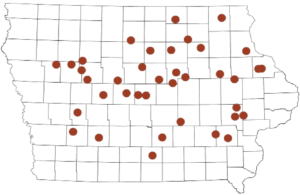 Since 1987, PFI’s Cooperators’ Program has empowered curious farmers to conduct on-farm experiments that answer their questions and guide their decision-making. Our program is unique in that farmers have always been at the helm – they are the ones brainstorming projects, setting on-farm research priorities and gathering the data on their farms.

While PFI staff guide farmers through the process of setting up an on-farm trial (and no prior research experience is necessary), farmers are very much partners and leaders in the process. Most on-farm research trials take place on the farms of participating farmers, and the Cooperators’ Program research agenda is developed and carried out by farmers.

We refer to our farmer-researchers as cooperators because the first experiments in the program were done in cooperation with agricultural researchers. Nowadays, on-farm research trials are collaborative efforts between farmers and PFI staff scientists who guide the design of experiments based on questions posed by the participating farmers. On-farm research projects are also often collaborative endeavors among several farmers. So “cooperator” applies on many levels!

Do I have to be a “scientist” to participate?

Not at all! You do not need a research or science-based background to participate. All you need is an idea you want to test on your farm and PFI’s staff scientists help with the rest. That said, just like scientists, you are making observations about your farm – and decisions based on available data – on a regular basis. So you’re arguably a scientist already! What we do in the Cooperators’ Program is empower you to answer your pressing farm questions using the simple yet rigorous tools of scientific research.

How exactly does it work?

Each year, farmers who have conducted on-farm research – and those who’ve told us they aspire to – are invited to our annual Cooperators’ Meeting. Held in December, this gathering is about connecting as a community of on-farm researchers, and focuses on sharing results and observations from the past year’s farmer-led research trials.

During the meeting, cooperators are encouraged to describe what they did, why they did it and what they found. Cooperators also generate ideas and make plans for future projects based on previous results and new questions. Before the onset of spring, cooperators and PFI staff mutually agree on project plans and commitments.

When the time comes to conduct the trials, farmers are ultimately responsible for planting seeds, tending to animals and taking measurements throughout a trial. 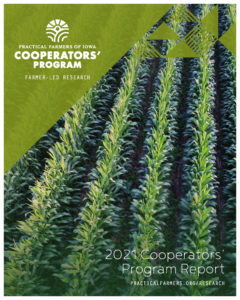 What will I gain from participating?

Useful, reliable research that helps you understand what works and what doesn’t on your farm

Connection with a community of curious farmers with whom you can exchange ideas and experiences, and who can help you expand your knowledge of what’s possible with on-farm research

Okay, you’ve got me hooked. I have something I’d like to investigate on my farm. What should I do now?

We’d love to hear about it! Contact Stefan Gailans, senior research manager, to learn more and get started.

I can’t be a farmer-researcher but would like to see the results. How can I do that?

The results of our Cooperators’ Program research provide relevant, unbiased and science-based information that farmers can trust about new practices. You’ll see summaries of our 2021 research in the following pages. For more in-depth results (as well as reports from previous years’ trials), visit us online at practicalfarmers.org/research.

Read the PDF version of the Cooperators’ Program Report 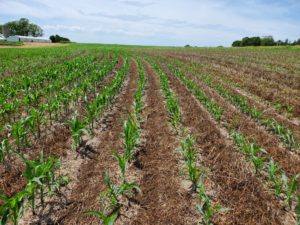 Cover crops are typically grown during the periods between two cash crops, then killed around the date the second crop is planted. Jack Boyer and Dick Sloan, however, wanted to prolong growth of a clover cover crop beyond corn planting to maximize the clover’s benefits. They hypothesized that suppressing, but not killing, the clover cover crop at the time of planting corn followed by fully killing it at a later date (delayed termination) would not harm corn yields compared with fully terminating a clover (Dick) or rye (Jack) cover crop at the time of planting corn (referred to as at-plant termination). Weed pressure at both sites necessitated earlier clover termination in both Dick’s and Jack’s delayed termination treatments than both hoped – 38 days after planting at Jack’s and 24 days after planting at Dick’s. 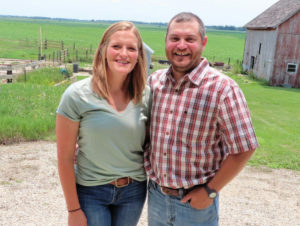 Research has shown that neonicotinoid insecticide seed treatments do not improve plant population or yield. Due to their low cost, however, seed treatments are commonly marketed to farmers for preventive use and without scouting first for target insect pests to confirm the need for these seed treatments. Previous PFI cooperators have done a range of on-farm trials exploring the benefits of using treated seed and found no yield gain. 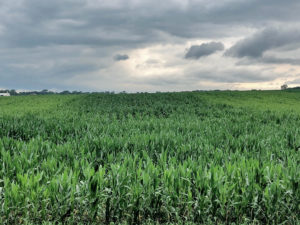 Corn following red clover (center) was darker green than corn following cereal rye (sides). “They were so green,” Arlyn said. “It was astonishing from the road to see the difference in corn color. From the air, even more.”

Arlyn Kauffman initially wanted to compare biomass and grazing value among three green manure cover crops established between the rye and corn phases of his crop rotation. He frost-seeded strips of red and balansa clovers into his rye crop in March 2020, but sparse summer rainfall forced him to abandon seeding his third treatment: a cover crop mix seeded after rye seed harvest in July 2020. 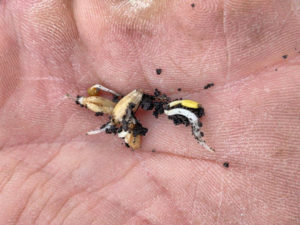 Food-grade oats are making a comeback in corn-soybean rotations, and it’s a win-win for farmers and the environment. Diversifying with oats spreads the risk for growers across additional enterprises. It also improves corn and soybean yields and reduces nitrogen and herbicide inputs without sacrificing weed suppression. 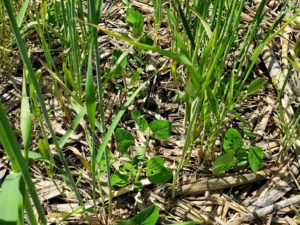 Beans reached the trifoliate stage 26 days after planting – the same date on which Dick Sloan terminated the cover crop in his delayed treatment near Rowley, Iowa. 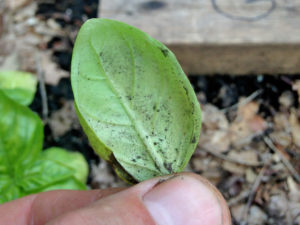 The underside of a Genovese basil leaf at Jon Yagla’s farm in Iowa City, Iowa, on July 16, 2021, reveals signs of downy mildew.

Downy mildew is a basil disease that shortens the harvest window and reduces cumulative yield. The farmers at Sundog Farm, Scattergood Farm and The Millet Seed Farm wanted to compare yields between Genovese basil – a tried-and-true variety – and two varieties (Rutgers Devotion DMR and Prospera DMR) that are more expensive but bred for downy mildew resistance (DMR). 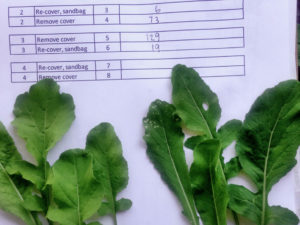 Arugula greens are highly desirable to humans and, unfortunately, flea beetles too. Flea beetles pierce the tender arugula leaves to feed and leave small holes that can render leaves unmarketable. Row covers protect arugula until they are removed for the first harvest, but time and labor constraints can keep growers from re-covering arugula between the first and second harvest. 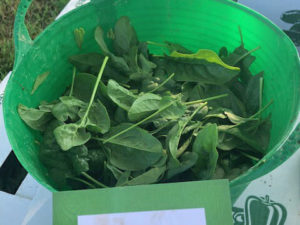 Climbing summer temperatures eventually cause spring-planted spinach to bolt, reducing yields with each successive harvest. Hannah Breckbill, Emily Fagan and Kate Edwards, all of whom wish to provide their customers with spinach later into the summer, sought to determine which of three seeding methods – seeding by hand at double the rate, or with a seeder at a double and single rate – would result in greater yields. Kate commented, “Calibrating mechanical seeders in horticulture is very imprecise. Unpredictable seeding rates results in under- or over-seeded spinach and inconsistent yields.” Kate additionally compared yield between two spinach varieties: Kolibri and Kookaburra. 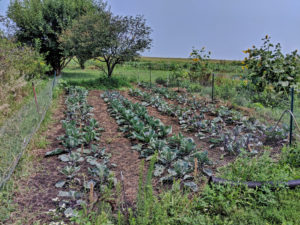 In a 2020 summer cabbage variety trial, cooperators that year tested red and green cabbage varieties and found the red varieties yielded significantly less and were of lower quality. Emily Fagan, Hannah Breckbill and Alice McGary have also found it challenging to produce quality red cabbages and have heard the same from other growers. Curious to look more specifically at red cabbage production, they conducted this trial in 2021 to compare yield and quality of four red cabbage varieties: Buscaro, Ruby Perfection, Mammoth Red Rock and Integro. 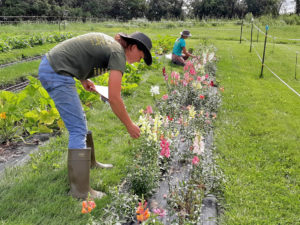 Jill Beebout, Anna Hankins and Shae Pesek grow cut flowers to provide their CSA customers with weekly flower arrangements. The three wished to gain experience growing different snapdragon varieties with different bloom times and types. They counted the number of marketable stems produced by each of the varieties they grew to find out which was most prolific. Jill said, “Growing cut flowers is still a fairly new enterprise for us and we’ve just defaulted to the same standby variety. This trial gives us a push to expand our familiarity with other varieties and increase our cutting beds.” 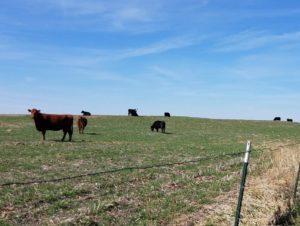 The practice of letting livestock graze cover crops provides economic returns, and farmers wonder if benefits to soil health follow suit. Economic returns are realized within a year’s time, while soil health impacts are slower to manifest. Mark Glawe, an integrated cattle-crop farmer, grazed cover crops in the fall, winter and spring from 2019-2021. To determine the economic and soil health impact of grazing cover crops, Mark kept cover crop and grazing records and had his soil sampled in the fall and spring of each year. 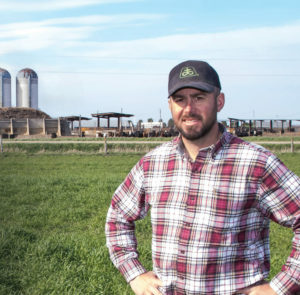 Ben Albright stands in the cover crop field adjacent to his feedlot on his family’s farm near Lytton, Iowa. Photo courtesy of Landus Cooperative.

Ben Albright and his family operate a diversified crop and beef feedlot farm. In this trial, feedlot cattle were allowed access to a cereal rye cover crop field adjacent to the lot in fall, winter and early spring, which provided supplemental forage to the herd. To determine the economic and soil health impact of grazing cover crops, he kept cover crop and grazing records and had his soil sampled in 2019, 2020 and 2021.