Monserrat Iñiguez - Practical Farmers of Iowa Skip to content
About 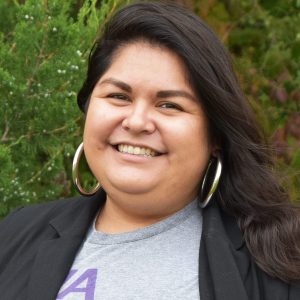 Born and raised in Los Angeles, Monserrat received what she describes as her “post-secondary education” at the Labor Community Strategy Center, a Los Angeles-based think tank and “act tank” that works to build regional, national and international movements. At the center, she learned grassroots community organizing while participating in protests, rallies and hunger strikes in support of low-income, working class communities of color.

Since relocating to Iowa in 2011, she founded a community-driven platform for language arts expression called Soapbox Speakeasy; and served in the Public Allies AmeriCorps program as the school district equity specialist at the Des Moines Public School District. She also served as the intake officer for the Des Moines Civil and Human Rights Commission, where she also developed and facilitated numerous strategic dialogues for the department’s Bridging the Gap project and Refugee and Immigrant Advisory Subcommittee. Monserrat was recently named executive director of the Latina Leadership Initiative of Greater Des Moines.

Monserrat sees Latino outreach with PFI as a way to promote and expand farming opportunities to a community that has been historically exploited by the industry and excluded from ownership.

As the population of Latinos in Iowa continues to grow, Monserrat is curious to explore ways this community can integrate into Iowa’s agricultural industry beyond labor, and expand entrepreneurial ventures that also cultivate, nurture and protect cultural customs. Over the past 20 years in particular, Iowa’s demographics have been shifting and increasing in diversity, and we have to meet that trend across all sectors, from workforce to crops.